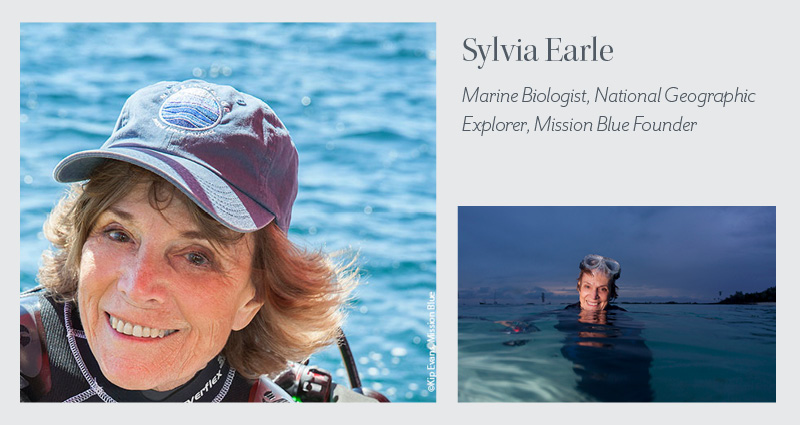 You might be living at the bottom of the ocean if you have never heard the name Sylvia Earle. Then again, if the sea floor is the place you call home you have probably crossed paths with Earle more than a few times. An oceanographer, undersea explorer, and ambassador for the world’s oceans, Earle has been fearless in her quest to discover the mysteries of marine life, living for weeks at a time in an underwater habitat, setting records for the deepest untethered dive, and parting the seas of masculinity to lead the way for women in a male dominated field. Born in 1935 and raised in a time where women were not given the same opportunities as men, Earle could have easily followed one of the predetermined paths for women, but to this day, she has never let others’ expectations or experiences hold her back. Earle had the luck of being raised by parents who encouraged her to follow her dreams, instilling in her a love of the natural world, and it was after a move to Florida at 12 that she discovered the real undercurrent of her love for nature – the ocean. From then on, the deep blue was an intriguing mystery to Earle, and she wanted to learn all that she could.

While attending Florida State University, Earle learned to dive with SCUBA gear—then mainly used for recreation–and realized its potential for use in studying marine life up close. Fascinated by all aspects of undersea life and believing that understanding vegetation was the first step to understanding any ecosystem, Earle decided to specialize in botany. She then went on to earn a master’s degree in botany from Duke University. After taking time off to start a family, Earle pursued her PhD, which she received from Duke University in 1966. Her dissertation, “Phaeophyta of the Eastern Gulf of Mexico,” created a sensation in the oceanographic community, as a marine scientist had never made such a long and detailed first hand study of aquatic plant life. At a time when many marine scientists only studied the ocean from its surface, Earle recognized the need to get a more complete picture.

Earle first got a full picture of life under the ocean in 1970, when she led the all-female research expedition, Tektite II. Living in an underwater habitat for two weeks, 50 feet below the surface, Earle was able to discover unique relationships shared between all marine life, learning more than she ever could have from a short dive. This adventure caused huge ripples in the oceanographic community as it was the first time an all women team had completed the same work as men. The publicity surrounding this event made Earle a recognizable face in the public as well, and she became an outspoken advocate of undersea research. In 1979 she made history again when she became the first person to walk untethered on the ocean floor at a depth of 1,250 feet. She was able to accomplish this using the JIM suit, a device that allowed her to work at surface pressure regardless of the depth. These experiences, and the knowledge that they were only possible because of technology, urged Earle forward in her quest to learn more.

With so much more to discover but little to no technology available to make these longer and deeper trips, Earle founded Deep Ocean Engineering and Deep Ocean Technologies to create the necessary equipment to move farther into the unknown. Knowing that she also wanted to protect the ocean for many generations to come, she founded organizations like Mission Blue and SEAlliance to inspire worldwide awareness for the exploration and protection of the ocean. During her long career, Earle has led over 80 expeditions, logged more than 7,000 hours underwater, lectured in more than 80 countries, and written nearly 200 scientific and popular publications. Over the years she has garnered a plethora of awards, honors, and recognitions, including being dubbed “Her Deepness” by the New Yorker, recognized by the Library of Congress as a “Living Legend,” named Time magazine’s first “Hero for the Planet,” and selected by Vogue as one of the “Five exceptional women who will inspire you to follow your dreams.” In 2013 she was awarded the Hubbard Medal, the National Geographic Society’s highest honor for distinction in exploration and discovery. Today, at 83, she continues to break down boundaries, constantly striving toward a healthy and vibrant future for the world’s oceans.