Her writing transports the reader into the landscape, inspiring a deeper, more visceral and spiritual connection between person and place. 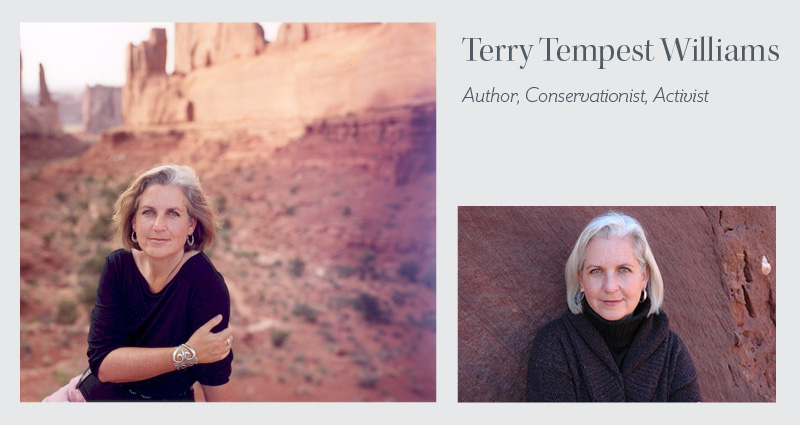 Terry Tempest Williams is one name consistently spoken with awe among conservationists, writers, and feminists alike. During her prolific career as a creative non-fiction writer, she has focused on the natural world and our role in it, seeing herself as a “storyteller of people, and people in place.” Born in 1955 and raised as a Mormon, Williams is very much a product of her environment. The lone sister amongst a band of brothers, Williams was blessed with strong female role models who taught her to think independently and gave her the freedom to explore her curiosity and sense of self. A daughter of Utah’s desert landscapes, Williams’ respect for nature stemmed from her surroundings as much as it did from her grandmother, a woman whose love of the outdoors was reflected in her ability to identify all manner of birds by sight as well as sound. It was the tradition of journaling, passed down through Mormon women, that inspired Williams’ reverence for the written word.

Williams graduated from the University of Utah in 1978 with a degree in English and a minor in Biology. She began her career teaching science at the Carden School in Salt Lake City, where she found her voice through the creative challenge of translating complicated ecological concepts into “language that wasn’t polemical but woven into a compelling story.” Through this experience she learned that a “shared love of nature was the most political act of all.” She went on to teach science at the Teton Science School in Grand Teton National Park before moving on to the Utah Museum of Natural History, where she became their first curator of education and their naturalist-in-residence.

In 1984, she published her first book, a children’s book called The Secret Language of Snow. Over the years she has made a living through her writing, as well as teaching appointments and fellowships at the University of Utah. She published a group of memoirs about family and connections to the land, as well as a series of books exploring the natural landscape and our connection to it. Along the way she has won numerous awards including the Robert Marshall Award from The Wilderness Society, the Distinguished Achievement Award from the Western American Literature Association, the Wallace Stegner Award from The Center for the American West, and the John Muir Award from the Sierra Club, recognizing leadership in American conservation.

Along with writing and teaching, activism has always been part of Williams’ life work, and one episode in particular put her in the national spotlight more recently. In 2016 Williams and her husband, Brooke, attended a federal oil and gas lease sale in Salt Lake City, to bear witness to the destructive practices of resource extraction on public lands. They decided to purchase the leasing rights to 1,120 acres (for just $2500.00) and created Tempest Exploration LLC, the first energy company with the goal of conservation instead of extraction. The Bureau of Land Management initially rejected Williams’ claim to the land because they did not plan to extract resources, but they have vowed to fight this in court.

Her commitment to speaking out and taking actions on behalf of conservation has made Williams a hero to many but resulted in the loss of her job at the University of Utah, where she’d been the founding chair of the Environmental Humanities Graduate Program. Luckily Harvard took this unexpected opportunity to hire Williams and she has just begun her second year as writer-in-residence at the Divinity School. While Cambridge is a far cry from her native desert landscape she has found a second home there and continues her writing and teaching, spending time now contemplating the “spiritual implications of climate change.”

Despite this recent upheaval, Williams continues to publish pieces for national publications like Orion and the New York Times. She completed her most recent book to coincide with the official centennial of the National Park Service. A meditation on 12 parks in the system and their complex histories, The Hour of Land explores the way that national parks reflect political and social change in our nation’s history. As with all her writing, this new book asks us to revisit familiar places with a new lens and rediscover the landscape.