Her writing and advocacy advanced social and environmental justice, and spurred the creation of Everglades National Park. 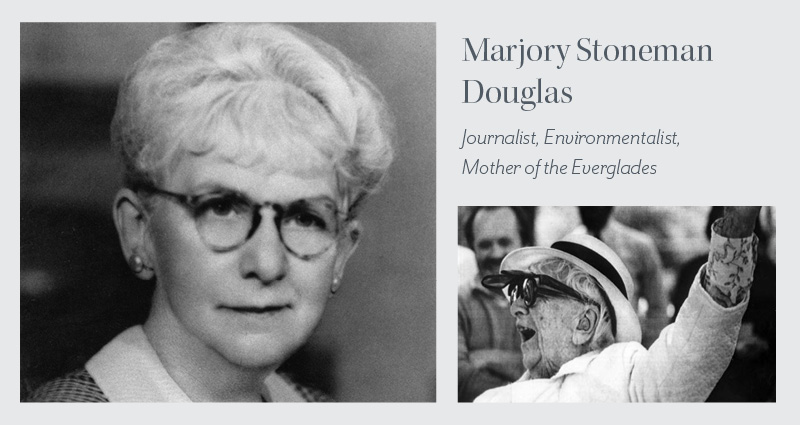 For many Americans today, the name Marjory Stoneman Douglas is most closely associated with the horrific mass shooting that occurred this February at the Parkland, Florida high school bearing her name. But there is a reason why Broward County, home to a large portion of Everglades National Park, chose in 1990 to name the new high school after Marjory Stoneman Douglas on what happened to be her 100th birthday: she played a major role in the creation of that very park.

In 1915, after graduating from Wellesley College, Stoneman Douglas began her career as a journalist writing society articles for The Miami Herald. She quickly distinguished herself as a columnist, offering strong opinions in support of women’s suffrage and civil rights, and against prohibition and foreign trade tariffs. After a brief hiatus from the paper to serve in the Navy and American Red Cross during World War I, she returned to Miami to continue her work at the Herald for three years before becoming a freelance writer focusing on women’s suffrage, racial justice, and conservation.

Her interest in the Everglades began in the 1930s when she served on a committee to establish the Everglades as a National Park. By 1934, the United States Congress designated the Everglades as a park, but it took over 13 years to acquire the land and all the funding. During that time, Stoneman Douglas was asked by the Farrar & Rinehart publishing company to write a book about the Miami River for their Rivers of America Series. Stoneman Douglas instead proposed a book about the Everglades, citing its connection to the Miami River. The publisher agreed, and Stoneman Douglas spent the next five years researching the history and ecology of Everglades. The result of her research, the book The Everglades: River of Grass, was published in 1947 and sold out within a month. The book, which greeted the reader with the powerful message that “There are no other Everglades in the world,” revealed the significance and unique diversity of the ecosystem as well as its vulnerability in the face of real estate and agricultural development. It is credited for rousing people to begin protecting the Everglades. On December 6, 1947, Everglades National Park was established to conserve and safeguard 1.5 million acres of the ecosystem in Florida’s southern tip.

Stoneman Douglas continued to speak out on behalf of the ecosystem she had come to love so deeply. In the 1950s, she voiced strong opposition to the U.S. Army Corps of Engineers’ modification of the Kissimmee River, which had a disastrous impact on the Everglades. She was also instrumental in preventing the siting of Miami International Airport within the Everglades. In 1969, at the age of 79, she founded the Friends of the Everglades, a non-profit whose mission to “preserve, protect, and restore the only Everglades in the world” continues today.

Marjory Stoneman Douglas’ active fight to protect the Everglades earned her the nickname “Grandmother of the Glades” and countless honors, including the Presidential Medal of Freedom, which was awarded to her by President Bill Clinton in 1993. The high school in Parkland is not the only thing named after Stoneman Douglas. The Florida Department of Environmental Protection headquarters building also bears her name. In 1986, the National Parks Conservation Association established the Marjory Stoneman Douglas Award, to recognize the outstanding efforts of an individual or group that results in the protection of a national park or proposed site in the National Park System.  After her death at the age of 108 on May 14, 1998, Marjory Stoneman Douglas’ ashes were scattered within the Everglades National Park, among the ecosystem she passionately protected throughout her lifetime.