An international leader in restoration ecology, she is bringing social and environmental scientists together to address pressing environmental challenges. 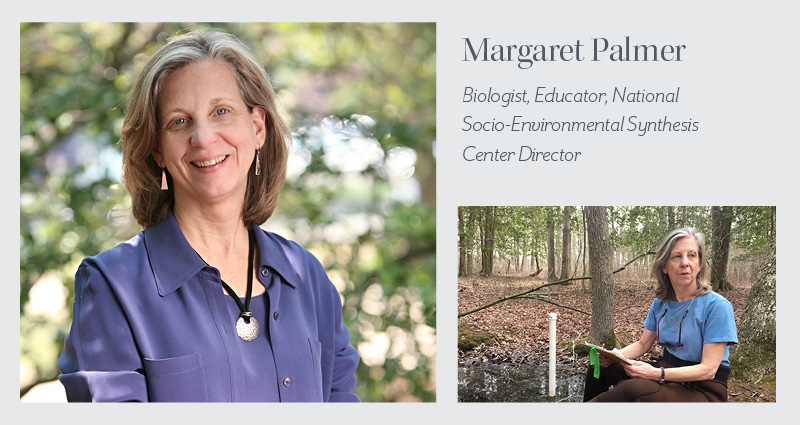 “Women provide diversity in thought in ecological work, however, that’s not the only type of diversity that’s valuable,” according to Margaret Palmer, a Distinguished Professor at the University of Maryland. “Diversity in other qualities, such as background and race, are also important.”

After earning a PhD in coastal oceanography from the University of South Carolina, Palmer’s next step was teaching in Indiana which gave her an inland perspective. Over the years, her research as migrated into the territory of ecology where biological and hydrogeological processes impact each other. “The systems focus of ecology resonates with me,” she says. “That’s how I think.”

Palmer’s research topics have included restoration ecology, wetland hydrology and carbon dynamics, the environmental impacts of mining, and invertebrate biodiversity. As the director of the University of Maryland’s Palmer Lab, her most recent endeavor is the National Socio-Environmental Synthesis Center, or SESYNC. Located in Annapolis, Maryland, SESNYC combines environmental research with human behavior and decision-making to create interdisciplinary scholarship that will accelerate scientific discovery. Diverse teams of social and natural scientists bring different perspectives to topics such as species protection and water resources management. The center is funded by a National Science Foundation grant to the University of Maryland.

In addition to dozens of published papers and awards, Palmer is the author of Foundations of Restoration Ecology’s second edition. One highlight of her career was being interviewed by Stephen Colbert. Palmer was studying the impacts of mountaintop mining in central Appalachia and published a paper in Science with her results. Her testimony at a Senate hearing to end the destructive practice resulted in an interview on the Colbert Report program.