Her work is helping to protect coastal marine fauna in Ecuador. 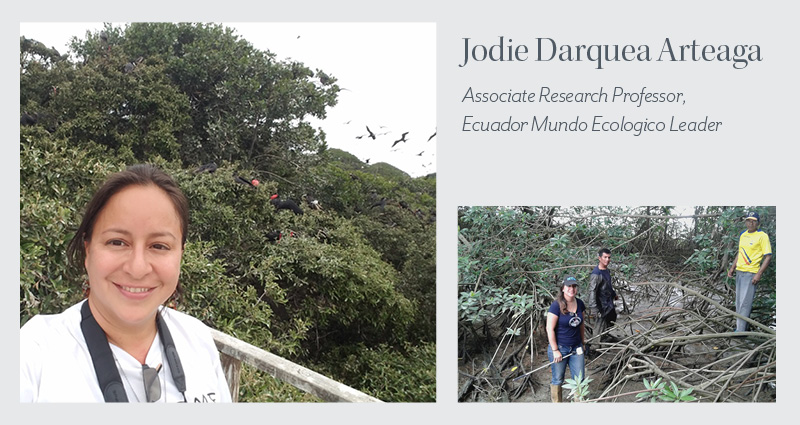 Detecting bycatch, which happens when fishing lines accidentally entangle non-target animals such as dolphins, turtles, or seabirds, is a difficult business. International governing bodies require the captains of large, industrial fishing vessels to carry onboard observers to document accidental take. But in many countries, small fleets are not observed, though they might number thousands of boats. Understanding their impact on the resources requires local conservationists and researchers like Jodie Darquea Arteaga.

Darquea is an associate research professor at Ecuador’s State University of the Santa Elena Peninsula and leads Ecuador Mundo Ecologico, an organization dedicated to understanding accidental bycatch in these small fleets. The conditions faced by these fishermen are hard to imagine. A typical artisanal fishing boat in Santa Rosa, Ecuador, is an open fiberglass hull, some as small as 25 feet. Fishing grounds might be 100 miles and seven hours away, so the fishermen spend between two and four days at sea, without toilets, hot food, or protection from the sun or the elements. In 2012, a typical haul might have brought a crew member $50 for three days.

While some fishermen are open and concerned about accidentally catching turtles or albatross, many are suspicious, secretive, and concerned that sharing information will lead to tougher regulations. People like Darquea, who run voluntary onboard observer programs under rigorous scientific standards, must be as skilled in diplomacy as they are in natural history. Before her work in Ecuador, there was virtually no documentation of bycatch by these fishermen, but her projects have changed the conservation approach to critically endangered animals such as the Waved Albatross (Phoebastria irrorata). Working with the local non-profit organization Equilibrio Azul and international partners such as the Peruvian NGO Pro Delphinus, Darquea has meticulously documented over 700 of these fishing trips.

The trajectory of biologists in Ecuador invariably includes unpaid internships, which effectively prohibits advancement by students who are not from wealthier families. Darquea’s undergraduate thesis was on aquaculture and funded by local shrimp companies. Although she valued the education she received, she continually sought opportunities to work in conservation, and eventually found a position with Equilibrio Azul. Her onboard observer program provided information that no one else could obtain, and though the scientific community recognized its value, she knew that her language skills and undergraduate degree would limit her ability to advance in the field. In 2012, she took the initiative to embark on a two-year intensive English Program and managed to raise her proficiency to the level required by most US institutions.  From there she began to apply to US master’s programs and won a seat at the Scripps Institution of Oceanography. Her application was strong because of her rare and hard-won data sets, but the rigor and pace of the work was initially bewildering.

“I had applied to several universities,” she says. “But in truth, I didn’t know how famous it was. I didn’t know enough to be intimidated. It was very difficult.”

Her determination and single-minded dedication to conservation biology is inspiring to Biohabitats biologist Jessica Hardesty Norris, who met Darquea a decade ago.

“Colleagues like Jodie are a great source of inspiration to me,” she says. “No matter how hard I worked, the odds were ever in my favor because of where I was born. I have to wonder if I would have ended up in this field if I had had to face the hurdles that Jodie did, from machismo to financial concerns to family obligations to language. Seeing her dedication makes me want to do my work better.”

These days, Darquea is very well-placed to mentor young women like the student she was.