A soil microbiologist and founder of Soil Foodweb, she is connecting the dots between human, soil, and planetary health. 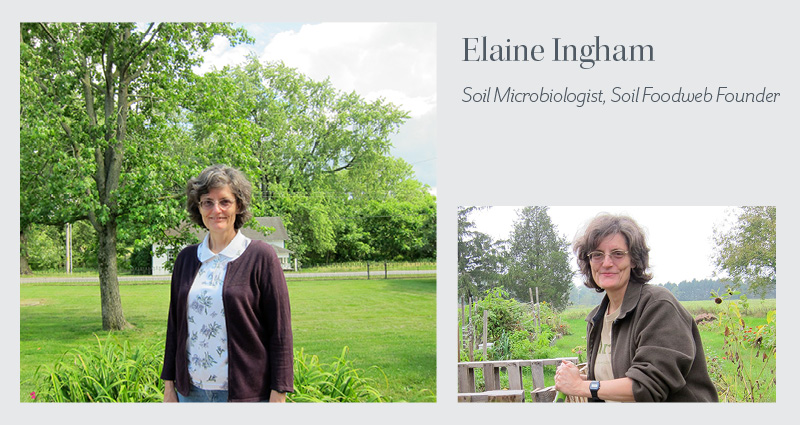 In the mid-1980s and 90s, after earning her PhD in microbiology, Elaine Ingham was an associate professor teaching forest science, botany, and plant pathology at Oregon State University. She was on the path to becoming a fully tenured professor, when a study she led on a genetically engineered soil bacterium changed the course of her career–and possibly all plant life on Earth.

A European biotech company was preparing to commercialize a genetically engineered soil bacterium called Klebsiella planticola. In its natural form, K. planticola helps decompose plant matter. The genetically modified version was intended to convert plant waste to alcohol, which could be used for fertilizer or fuel. But when Dr. Ingham and her team decided to run their own test on the alcohol-producing bacterium, they discovered that it not only killed all of the plants tested, but had the potential to kill all terrestrial plants. Her findings ultimately prevented the genetically altered bacterium from being commercialized, highlighted the importance of pre-market safety testing, and raised awareness of the potential dangers of GMOs. Unfortunately, they also brought about the end of her affiliation with Oregon State University, an institution that received a great deal of funding from the biotech industry.

Though she continued to conduct research, Ingham opted to share her growing knowledge about life in the soil with a community broader than academia. She launched the Microbial Biomass Service, which offered researchers and commercial clients the ability to have soil samples analyzed for soil food web organisms. She later founded Soil Foodweb, Inc., a consulting firm dedicated to advancing sustainable agriculture in which a healthy soil food web promotes plant growth, reduces reliance on inorganic chemicals, lowers farming input costs, and regenerates ecosystems. She developed new methods of rapidly assessing soil and foliage-related organisms and the ways in which soil and foliar biology change with different management practices. Her firm works toward its mission through direct consultation, workshops, online training, and public speaking engagements. Through much of the last decade, Ingham also applied her knowledge of “helper organisms” by supporting allied organizations. She has also served as the Chief Scientist for the Rodale Institute and Managing Scientist at Environment Celebration Institute.

Ingham’s four decades of soil biology research have shed important light on functions of soil-dwelling organisms, and the roles they play in plant and animal health. Through her work with Soil Food Web, Inc., she has also enabled thousands of farmers, land managers, landowners, ranchers, and landscapers throughout the world to restore highly functional, fertile soil and shift from chemical to biological treatments.