An icon in the field of primatology, she has inspired generations of young women interested in scientific research and conservation advocacy. 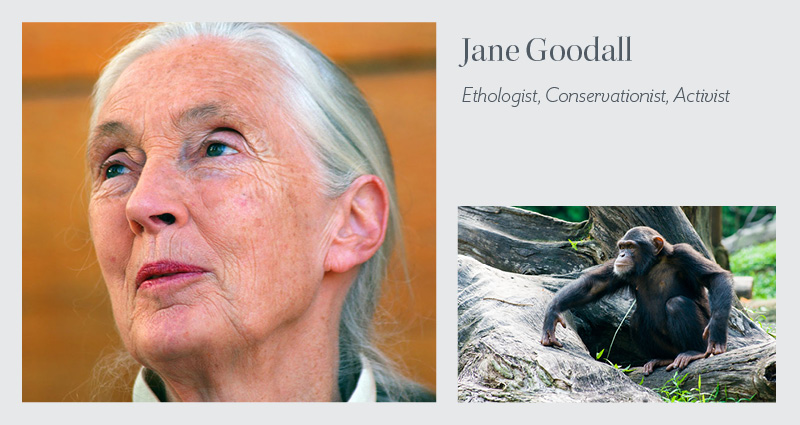 The mere mention of Jane Goodall almost immediately conjures the iconic image of a young woman with a blond ponytail sitting in the African bush, one hand clutching a field book, the other reaching out to a chimpanzee. Her face is lit with compassion and curiosity, along with utter concentration on the task at hand. It is no exaggeration that Goodall is an icon in the field of primatology and an inspiration for generations of young women interested in scientific research and conservation advocacy.

Valerie Jane Goodall was born on April 3, 1934 in London, England. At an early age, she became enthralled with Africa through the stories of Tarzan and Doctor Dolittle. After graduating from secondary school in 1952 she worked for a time as a secretary at Oxford, saving all of her earnings to fund a trip to the continent. She finally had the opportunity to visit Africa for the first time with a school friend who was working in Kenya. There she met the famous paleontologist, Louis Leakey. Leakey felt that a long-term study of primate behavior in the wild would provide important data for the study of human evolution. After he met Goodall, he decided she had the right temperament and the passion for the work, which would require long-term isolation in the wilds of Tanzania. And thus her fate was set. She returned home briefly while they raised the funds for her to begin the research. Besides being a woman in a male-dominated field, Goodall came to the research without any formal training, beyond that which was shared in her discussions with Leakey and gained during basic studies of primate anatomy and behavior that she undertook while waiting for her trip to commence. As a young single woman it was also deemed inappropriate for her to travel to Tanzania unaccompanied, so her mother joined her.

Goodall’s methods were simple but highly successful. It took two years from her arrival in 1960 at Gombe Stream National Park for the chimpanzees to allow her to come close enough to them to make detailed observations. For months at a time she would walk into the bush along Lake Tanganyika, observing and imitating the animals and taking copious notes in dozens of field journals. In 1961 Jane was admitted to a doctoral degree program at Cambridge while continuing her work in Tanzania, and in 1966 she was one of only 8 in history to earn a PhD there without a college degree. By establishing close contact with the chimps, Goodall was able to make many previously unknown discoveries: that they were not always vegetarian, that they used tools (a groundbreaking find that showed that humans were not the only species who fashioned and then used tools), that they have a complex social system with ritualized behaviors and primitive communication methods, and that they have long-term familial bonds.

Her continued research in Tanzania led to a series of publications, outreach, advocacy and further notoriety on the international stage. Her first book, In the Shadow of Man, was published in 1971, and it introduced the general public to the scientific inquiry into the relationships between humans and our closest relatives. She began to write and speak out about the issue of conservation, education and human rights. She founded the Jane Goodall Institute in 1977 as a global nonprofit organization focused protecting  chimpanzees and providing the communities that surround their habitat with conservation education. The Institute later added the Roots and Shoots program as a global online community of young people and educators. In 2002 Goodall was named a United Nations Messenger of Peace and in 2004 she was invested as a Dame in the British Empire.

Over the last few years, renewed attention has been garnered for her work through the recent documentary, Jane, and a new children’s book called, I am Jane Goodall, by Brad Meltzer. Jane Goodall continues to stay active in advocacy and education, speaking to audiences around the world about climate change, the destruction of the rain forest, the pollution of the oceans, the loss of biodiversity, endangered species, the plight of refugees displaced by conflict and environmental catastrophe, factory farms and wildlife trafficking.