Her work and activism linked grassroots conservation and social justice, helping marginalized communities improve their environment and quality of life. 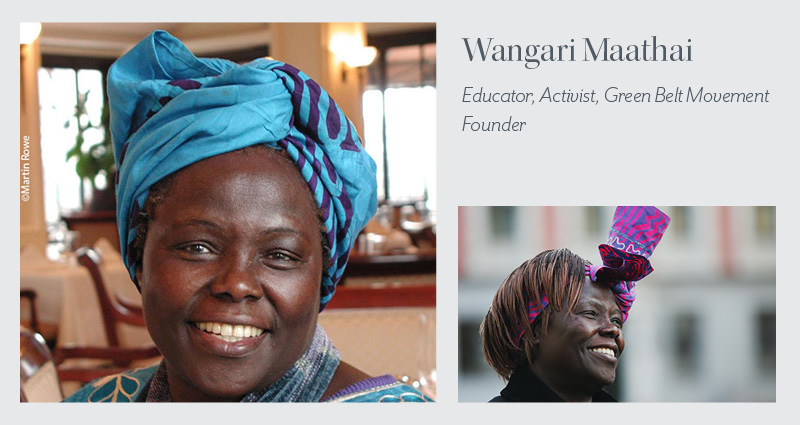 Wangari Maathai was born in a rural area of Kenya in 1940. After winning a scholarship to attend college in the U.S., she earned a B.S. from Mount St. Scholastica College in Kansas and an M.S. in biological sciences from the University of Pittsburgh. Maathai returned to Kenya to continue her education at the University of Nairobi, and when she completed her PhD in veterinary anatomy in 1971, she became the first woman in Central and East Africa to earn a doctorate degree.

Maathai remained at the University of Nairobi as an associate professor. In 1976, she became chair of the Department of Veterinary Anatomy. During her professional career, she became involved with the National Council of Women of Kenya and in 1976 presented the idea of community-based tree plantings to conserve the environment and improve quality of life. The idea came as a response to rural Kenyan women stating their struggles to find firewood and nearby streams drying up, which was also creating food security issues. In 1978, Maathai’s suggestions further developed into the Green Belt Movement (GBM), a grassroots organization with a mission to reduce poverty and increase environmental conservation through tree plantings. GBM encouraged Kenyan women “to work together to grow seedlings and plant trees to bind the soil, store rainwater, provide food and firewood.” In return, women would receive a small monetary token for their work. Since the movement began, more than 50 million trees have been planted on farms, schools, and churches throughout Kenya. Several other African countries have begun similar initiatives to combat environmental degradation and improve human rights.

Internationally, Maathai has been recognized not only for her environmental conservation work, but also her persistent struggle for democracy and human rights. She has addressed the UN several times and has spoken on behalf of women at special sessions of the General Assembly. In 1997, Maathai was elected as one of 100 persons in the world by Earth Times who have made an environmental difference. In 2002, she was elected to the Kenyan parliament, where she subsequently was appointed by the president as Assistant Minister for Environment and Natural Resources.

In 2004, Maathai became the first environmentalist and first African woman to win the Nobel Peace Prize. Maathai stated, “I always felt that our work was not simply about planting trees. It was about inspiring people to take charge of their environment, the system that governed them, their lives, and their future.” Her Nobel win was due to in part to her “fight to promote ecologically viable social, economic and cultural development in Kenya and in Africa” by taking a holistic approach to sustainable development that includes and embraces both democracy and human rights, but more specifically, women’s rights.

Over her lifetime, Maathai authored four books and won more than 40 awards. In 2011, when she lost her battle with ovarian cancer at the age of 71, memorials were held throughout the world. Her mission, however, lives on. GBM continues to address poverty and environmental conservation through tree planting, but also through water harvesting, mainstream and gender advocacy, and climate change education.