She introduced the world to the idea of applying nature’s 3.8 billion years of wisdom to the design challenges of today. 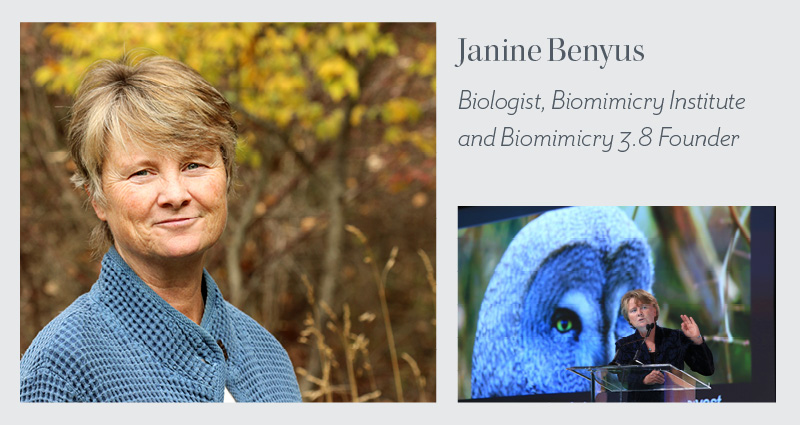 In 1997, biologist Janine Benyus wrote a book that revolutionized design thinking. Having previously written several books about the ways plants and animals adapt to thrive within the limits of their habitats, Benyus recognized the genius of nature as a model, mentor, and form of measurement for the sustainability movement. Her 1997 book Biomimicry: Innovation Inspired by Nature revealed fascinating ways that scientists were attempting to solve modern day problems by mimicking or taking inspiration from the models developed by nature over the last 3.8 billion years. This practice, known as “biomimicry,” requires adherence to what Benyus refers to as “Life’s Principles,” six design lessons garnered from the strategies used by species that survive and thrive on Earth: adapt to changing conditions; be locally attuned and responsive; evolve to survive; be resource efficient; use life-friendly chemistry; and integrate development with growth.

After exposing people to biomimicry in her book, Benyus began building a discipline around it. In 1998, she co-founded Biomimicry 3.8, a consultancy that has since helped more than 250 companies, including not only architects and planners, but large corporations such as Nike, IKEA, and General Mills. In 2006, she co-founded the Biomimicry Institute, a non-profit dedicated to sharing, promoting, and elevating the tools and practice of biomimicry. One of those tools is AskNature, an online library of natural phenomena that can inspire—and indeed have inspired—innovative solutions to human design challenges.

Benyus is currently working on what she calls “a sourcebook for Biomimicry practitioners and anyone who wants to understand universals-the patterns that unify our biodiverse world.” The new book will explore how nature scales, optimizes, forms partnerships, networks, learns, heals from disturbance, manages net-positive circular economies, and more. The audience for this book is likely to be considerable. Since publishing her monumental book two decades ago, Benyus has inspired a new generation of problem solvers who begin their process by asking, “What would nature do?”

Who inspires Benyus? “Lately, I’m inspired by the scientists who have come forward, to speak truth to power, to represent the beauty of all we stand to lose, and to bring us back from an anti-science dark age,” she said.

Today, there are 36 regional networks of biomimicry practitioners in 21 countries around the globe. Many of these practitioners are women. “I think women are attracted to this field in part because it’s so practical,” says Benyus. “It allows you to combine a love of the natural world with a desire to change the world for the better.” Whether these innovators—male or female–are crafting rainwater harvesting systems that mimic the strategies of bromeliads, designing disaster relief vehicles based on the form of an ant, or creating self-healing membranes inspired by the cells of a woody vine, one thing is for certain: they are addressing some of the world’s most pressing problems with a hopeful, promising approach that is founded on 3.8 billion years of research and development.