She fought for the rights of indigenous people and the protection of the natural environment in Honduras, and was murdered for her activism. 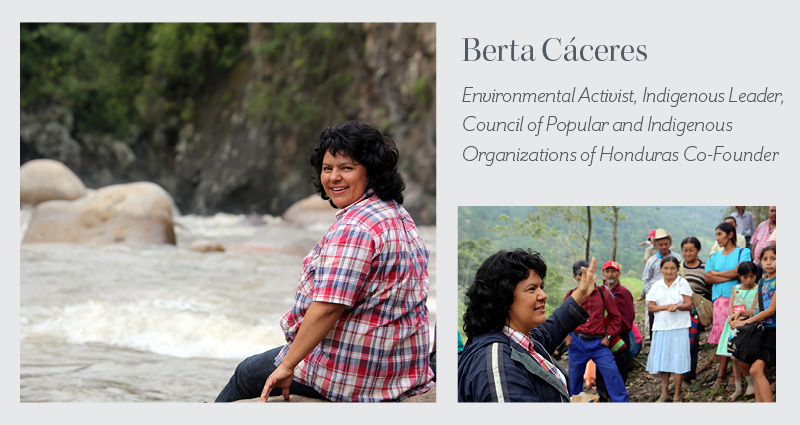 Photos: courtesy of The Goldman Prize

Berta Cáceres, perhaps the most renowned and revered Honduran environmental activist, was always a fighter. Cáceres was born into the Lenca community, the largest indigenous group in Honduras, in the 1980s, during a period of violence within Central America. The daughter of a social activist who frequently tended to refugees from neighboring El Salvador, Cáceres became involved with advocacy as a student, fighting against logging operations on Lenca land. In 1993, she co-founded the National Council of Popular and Indigenous Organizations of Honduras (COPINH) to continue this fight against logging and anything else that threatened the rights or livelihoods of the Lenca and other indigenous communities.

In 2006, Cáceres became involved in a fight that would shape the rest of her life. Members from the Rio Blanco community sought COPINH’s help in combatting a plan spearheaded by Sinohydro, a Chinese company, and the Honduran company Desarrollos Energéticos SA (DESA) to build a series of dams across the Gualcarque River – a body of water which held both spiritual and economic importance for the Rio Blanco community. Cáceres and COPINH began mounting a campaign against the Agua Zarca Dam project. COPINH filed complaints against the government on behalf of the community and, when those complaints were ignored, organized peaceful protests and international campaigns to garner attention and support. In April 2013, after it became clear that the government would continue forging ahead with the project, Berta organized a more than a year-long road blockade to prevent DESA’s access to the site. In late 2013, spurred by public outrage over increasingly violent responses from DESA and the Honduran government to the nonviolent protestors, culminating in the murder of a community leader, Sinohydro and an arm of the World Bank, another partial sponsor, abandoned the project, effectively halting construction on the project permanently. For Berta Cáceres’s role in this fight, she was awarded the Goldman Environmental Award in 2015. Sadly, she also received death threats.

On March 3, 2016, Cáceres was attacked and killed by gunmen in her home. Just last month, seven men, all with connections to DESA, were found guilty of her murder. According to the human rights site Global Witness, between 2010 and 2017, more than 120 people were killed in Honduras for their roles in environmental activism, in large part by the government or military.

In June of 2016 appalled by Honduran Government’s violence towards countless activists and ordinary Honduran citizens and disturbed by the role of the U.S. government in creating the conditions that led to such violence, U.S. Representative Henry Johnson (D-GA), introduced the “Berta Cáceres Human Rights in Honduras Act.” The bill would suspend the millions of dollars of funding that the United States gives the Honduran government and military in aid until such human rights violations perpetrated by the Honduran government end. To see how you can support this bill, please visit this website.