This prolific author and international water expert has dedicated her career to protecting freshwater ecosystems and promoting a new water ethic. 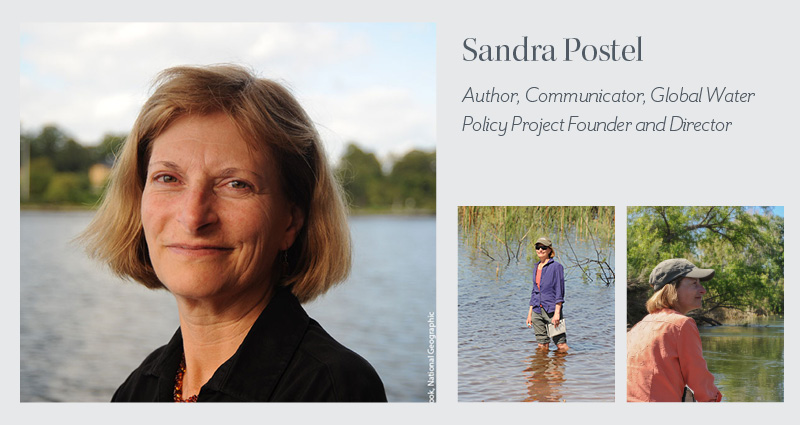 According to the 2018 World Economic Forum’s 2018 Global Risks Report, “a significant decline in the available quality and quantity of fresh water” is among the top global risks to society. Amid terrifying projections that water scarcity will lead to food shortages, ecological decline, and possibly war, there is a calm, but powerful voice offering a message of hope. That voice belongs to author and freshwater conservationist, Sandra Postel. The founder of the Global Water Policy Project, an organization with a mission to promote the preservation of Earth’s fresh water through research, writing, and outreach, Postel proposes a new approach to the way people use, manage, and value water–one that works with, rather than against, nature and places water’s most fundamental role—providing the basis for life on Earth—at the forefront.

“I’ve known since I was a young teenager that I wanted to do something on behalf of the Earth,” said Postel. She studied both geology and political science at Wittenberg University, and she has remained at the intersection of science and policy ever since. After earning her master’s degree in environmental management from Duke University, she briefly worked for an environmental consulting firm, where she had the opportunity to work on water conservation and groundwater pollution issues. Postel left consulting to join the Worldwatch Institute, where she became Vice President of Research. “I dove deeply into global water issues and just never looked back,” she said. “It was a steep learning curve for me, but it felt like I’d found my niche.”

Postel further embedded herself in that niche by launching the Global Water Policy Project in 1994. She has since shared her knowledge and advice with world leaders, television, film, and radio audiences, and numerous organizations engaged in water management and policy. She has also created important tools, such as the Water Footprint Calculator she developed while serving as Freshwater Fellow of the National Geographic Society. In 2012, Postel joined forces with Todd Reeve of the Bonneville Environmental Foundation, who developed a “Water Restoration Certificate” to help businesses balance their water footprint by investing in restoration projects. Together, Postel and Reeve created Change the Course, a water stewardship initiative to shrink the water footprint and restore water to the natural world. The program helps businesses and organizations shrink the water footprint of their products, supply chains, and operations. It also invites the public to make voluntary conservation pledges, and for each pledge returns 1,000 gallons of water to an ecosystem in need–restoration made possible by corporate sponsors that wish to balance their own water footprints. The program, which engaged more than 140,000 people and supported 17 restoration projects in its pilot testing phase alone, has restored billions of gallons of water to depleted rivers and wetlands and continues to expand throughout North America. In 2017, Change the Course received the US Water Alliance’s US Water Prize.

Postel has received numerous awards and honors, including being named among the Scientific American 50. She has written more than 100 articles about freshwater ecosystems and issues, and she has authored and co-authored five books. Her 1997 book Last Oasis: Facing Water Scarcity, which inspired a PBS documentary, appears in eight languages. Her 1999 book Pillar of Sand: Can the Irrigation Miracle Last? has been used at more than 130 colleges and universities. Her most recent book, Replenish: The Virtuous Cycle of Water and Prosperity, takes readers around the world to explore water projects that work with, rather than against, nature, and presents a powerful and practical argument for water stewardship.

“Sandra Postel has been writing about water for decades and has her finger on the pulse of which issues need attention and why,” said Biohabitats Southern Rocky Mountain Bioregion Leader, Claudia Browne. “Her recent book, Replenish, was an inspiring perspective on possible water solutions.”