Her writing ignited the U.S. environmental movement and changed the modern mindset regarding nature. 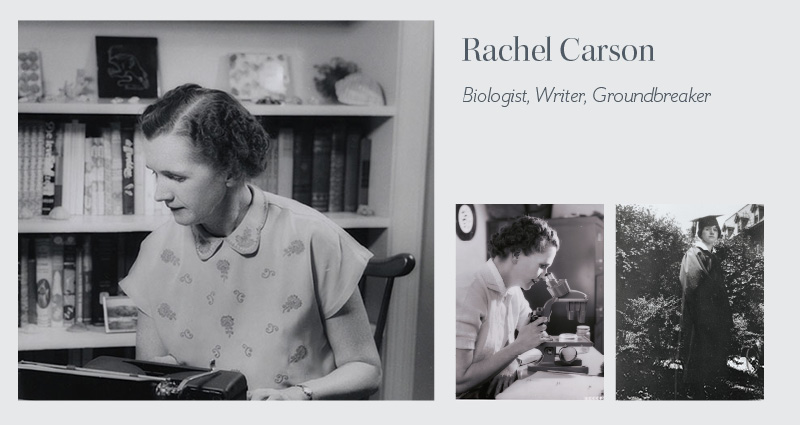 In September of 1962, a single book irrevocably shattered the prevailing cultural mindset that human ingenuity and technological innovation would triumph over nature.  The book was Silent Spring, and its author, Rachel Carson, is often credited with igniting the environmental movement.

Rachel Carson was an avid reader and writer whose dreams of being published came true at age 10, when a story she wrote appeared in a children’s magazine. By age 14, she was submitting articles to magazines for payment. While a sophomore with plans to major in English at the Pennsylvania College for Women (now Chatham University), Carson took a biology class that changed the course of her future. Fascinated with the science of life, she switched her major to biology. After a summer spent at the marine biology laboratory in Woods Hole, MA, where she discovered her love of the ocean, Carson went on to earn a master’s degree in zoology from Johns Hopkins University. She planned to pursue her PhD, but financial burdens brought on by the Great Depression and the death of her father forced her to find a paying job. She went to work for the U.S. Bureau of Fisheries (which became the U.S. Fish and Wildlife Service), where she wrote scripts for educational radio broadcasts and publications about the Bureau’s marine conservation work. In her free time, she wrote freelance articles about the Chesapeake Bay and the ocean for publications including the Baltimore Sun and Atlantic Monthly. In 1941, she published Under the Sea Wind, a book that would ultimately become the first in a trilogy about life in the ocean.

In 1945, Carson became aware of a study her agency had conducted on the effects on fish and wildlife of a potent synthetic insecticide known as dichloro-diphenyl-trichloroethane (DDT), which had been used overseas to protect American soldiers from insect-borne diseases like typhus and malaria. The scientists found that DDT “may have undesirable and even dangerous effects unless its use is properly controlled.” Alarmed by the findings and eager to make the public aware of them, Carson pitched an article about the potential collateral damage of DDT to the editors of Reader’s Digest. They were not interested. By the war’s end, DDT was sold directly to consumers and applied to farms, homes, and entire neighborhoods. It was credited for boosting yields and eliminating malaria from the U.S., and it spurred the development of more synthetic pesticides. While the U.S. government required chemical manufacturers to register these new compounds, it did not call for any independent testing of them.

In 1951, when the second book in her ocean trilogy, The Sea Around Us, made the New York Times Best Sellers list and won the National Book Award, Carson was able to quit her government job and devote herself to writing. The third book in Carson’s ocean trilogy, The Edge of the Sea, which examined the mysteries of the intertidal zone, was published in 1955. But Carson’s concern about the long-term impacts of chemical pesticides did not fade. In fact, when she became aware of the U.S. Department of Agriculture’s efforts to eradicate the invasive fire ant, which was damaging crops in the Southern U.S., by spraying DDT over 20 million acres of land, it intensified. Though wildlife biologists had done research and identified problems, their findings (which included evidence that DDT accumulated in the organisms exposed to it and increased in concentration as it moved through the food chain) were limited to the narrow reach of those reading scientific journals and technical reports. To bring this information –and an awareness of the potential dangers of blindly accepting technological advances as “progress” –to the public, she began writing what ultimately became Silent Spring. The book took her four years to complete, the last two of which she was also battling cancer. Despite the chemical industry’s attempt to dismiss and discredit Carson’s claims, Silent Spring was published on September 27, 1962, reviewed by every major publication in the U.S., and quickly became a best seller. CBS aired a special about the book, bringing its message to an even broader audience.

The book and the attention it received not only elevated the environment to the forefront of the public’s attention; it also prompted political action. Before the book was even published, President John F. Kennedy tasked his Science Advisory Committee to conduct an independent investigation on the use of pesticides. Separately, a Senate Subcommittee on Government Operations conducted a review of environmental hazards, which included pesticides.

“We have acquired technical skills on a scale undreamed of even a generation ago. We can do dramatic things, and we can do them quickly,” Carson said in testimony before that subcommittee. “If we are ever to solve the basic problems of environmental contamination, we must begin to count the many hidden costs of what we are doing and to weigh them against the gains or advantages.”*

On April 14, 1964 Rachel Carson died at the age of 56. Her challenging of the chemical industry — and the prevailing mindset of man dominating nature—was revolutionary, and it led to significant changes in environmental regulation.

*Copyright © 1963 by Rachel Carson, Reprinted by permission of Frances Collin, Trustee. All copying, including electronic, or re-distribution of this text, is expressly forbidden.