She has gone from journalist to politician to international leader in the fight against environmental racism. 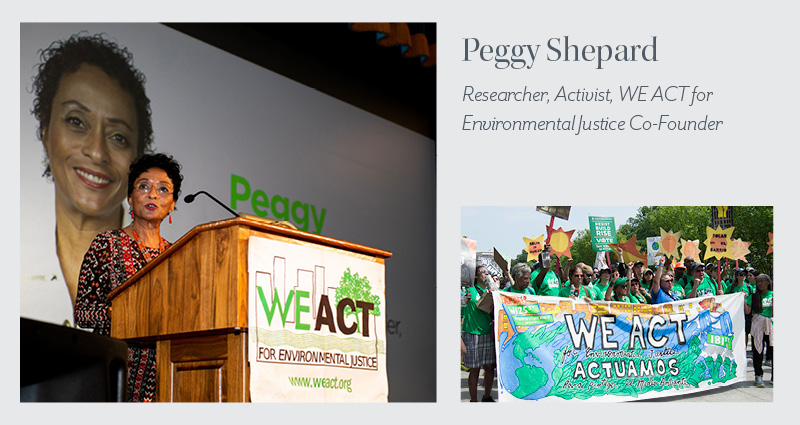 Photos: Courtesy of WE ACT

After breaking ground as the first African-American reporter for the Indianapolis News, Peggy Shepard moved to New York City in the 1970s with dreams of becoming a magazine editor. She landed an editorial position at Black Enterprise Magazine, and plans were in the works for her to launch the first African American lifestyle magazine. When the publisher decided instead to invest in radio stations, Shepard shifted to public service. A speechwriting job for the state government launched her into the realm of politics and social activism, where she thrived. She went on to become the public relations director for the 1984 Jesse Jackson presidential campaign and later was elected the Democratic District Leader for her community of West Harlem. While campaigning for that post, she learned that the City’s largest sewage treatment plant, originally sited in a white, upper-middle class neighborhood, was being constructed in her community. She also learned that the City was building a diesel bus depot across the street from a school and a large public housing development in West Harlem. She began to realize that her community was a “sacrifice zone,” an area targeted for the disproportionate burden of pollution. Thus began another shift in Shepard’s career—this time toward environmental justice advocacy.

“Working in politics, I began to understand that neighborhood quality was in a large part governed by the advocacy systems that those communities had,” said Shepard. She and her fellow district leader helped their community organize. On Martin Luther King Day in 1988, they held up traffic on the West Side Highway to protest the North River Sewage plant. Soon afterward, they announced that they were suing the Metropolitan Transit Authority and forming the non-profit West Harlem Environmental Action (WE ACT) to give voice to an underserved community and bring environmental racism and justice to the agendas of local government. Their multi-year efforts resulted in a $1.1 million settlement, a $55 million commitment to fix the North River plant, and the retrofitting of every bus in New York City to run on alternative fuels.

“One concern that impacts the entire environmental justice movement, no matter where you are, is having the capacity to address the impacts that are confronting our communities,” she said. “The State House can be three to four hours away from a community. A community not only needs the capacity and sophistication to work at a state level, but also the resources to travel to the state capital and spend a couple of days there.” Through advocacy, planning, and research support, WE ACT continues to build the capacity of communities to develop consensus around campaigns, and push city and state government to make policy changes and enact legislation that addresses their concerns.

Thirty years after that first protest on the West Side Highway, Peggy Shepard has become known as an international leader in the fight against environmental racism. In 1991, at the First People of Color Environmental Leadership Summit, she helped create the Principles of Environmental Justice. WE ACT is lead organizer of the Environmental Justice Leadership Forum on Climate Change, a national coalition of 41 environmental justice organizations working to advance climate justice and impact policy to ensure the protection and promotion of vulnerable communities. WE ACT representatives have worked with communities and NGOs as far away as Switzerland, Peru, and Figi. Shepard’s work to ensure the right of all communities to a clean, healthy, and sustainable environment has earned her numerous awards, including the Jane Jacobs Medal from the Rockefeller Foundation for Lifetime Achievement, and the Heinz Award for the Environment.

Rather than becoming discouraged by daily news, Shepard is patient, and finds inspiration in stories of success. “Every day, I see that some organization is doing something positive and I’m inspired to work harder.”