In fighting to protect her community from toxic waste, this housewife started a movement that led to the creation of the EPA’s Superfund. 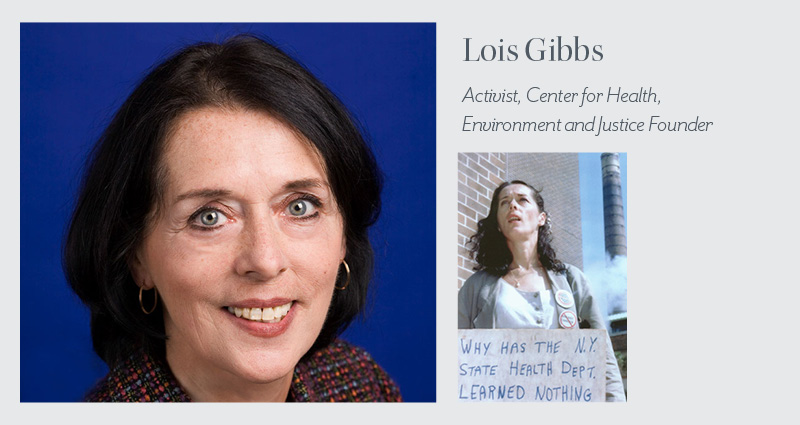 In the mid-1970s, when young housewife Lois Gibbs moved into a charming neighborhood located five miles upstream of Niagara Falls, she thought her family had achieved the American dream. Not long afterwards, however, she realized that her idyllic community, named “Love Canal,” was in fact located atop a nightmare: 21,000 tons of buried toxic waste.

In the 1890s, an entrepreneur named William T. Love attempted to dig a canal to redirect a portion of the Nagara River in order to harness its power and build wealth. Due to the Depression, the 16-acre “Love Canal” was never fully completed, and it was sold in 1920 at public auction and became a municipal and chemical disposal site used by the City of Niagara Falls, the U.S. Army, and the Hooker Chemical Corporation. In 1953, after filling in the canal, Hooker sold the land for $1 to the Niagara Falls Board of Education, which chose to build a school and playground on the site. A couple of decades later, that same playground was where Gibb’s young son—who had become stricken with several serious health conditions after the family moved to Love Canal–regularly played.

When she became informed of the neighborhood’s hidden history after reading an article in the local paper, Gibbs did what she is now known for: she took action to protect her children and the rest of the community from the harm of environmental contamination. After failing to get support from the City or School Board of Niagara Falls, Gibbs went door to door to inform her neighbors about the contamination. In the process, she learned that hers was not the only family suffering mysterious illnesses, miscarriages, and birth defects. She started the Love Canal Parent’s Movement, which evolved into the Love Canal Homeowner’s Association (LCHA). With help from a volunteer scientist, the LCHA began collecting data and conducting a study that revealed shocking findings, such as a 300% increase in miscarriages and urinary tract disorders among residents of the Love Canal neighborhood. When the state health authorities dismissed the study as “useless housewife data,” Gibbs and the LCHA persisted. They continued grappling with local and state government and implemented activism to increase awareness of their plight. Ultimately, the group’s efforts led President Jimmy Carter to declare Love Canal a federal health emergency and to call for the relocation of more than 800 families. Her efforts also contributed to the creation of the U.S. EPA’s Superfund for cleaning up toxic sites throughout the U.S.

News of Gibbs’ efforts sparked increased interest in and concern about waste and contamination in neighborhoods throughout the U.S. In 1980, to help other communities facing similar issues of environmental injustice, and to share the strategies and wisdom she and the LCHA had gained in the fight to protect the people of Love Canal, Gibbs created the Citizens Clearinghouse for Hazardous Waste. The organization was later renamed Center for Health, Environment and Justice and it has since become the nation’s leading resource for grassroots activism to prevent harm to human health caused by exposure to environmental threats.