She broke into the male-dominated field of geology in the 1950s and ultimately became known as the “Queen of the Pleistocene.” 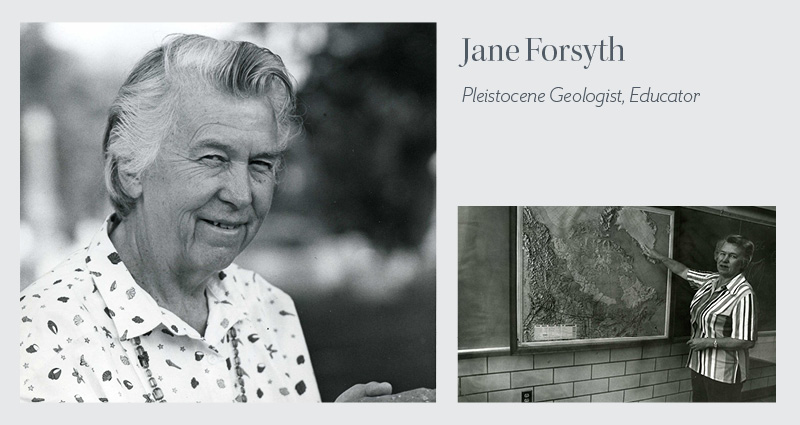 After earning a bachelor’s degree in geology from Smith College in 1943, when most of her peers were likely becoming homemakers, embarking on nursing, teaching, or secretarial careers, or exploring new opportunities in the military and manufacturing that opened up via World War II, Forsyth was looking back. Way back. As in 440 million years. Forsyth was studying the layers of bedrock deposited in Ohio during the Ordovician geologic period in pursuit of her Master’s degree from the University of Cincinnati. A few years later, she received her PhD in glacial geology from Ohio State University and began her career in the male-dominated field of geology, working as a Pleistocene geologist with the Ohio Department of Natural Resources. After 11 years in that post, she joined the faculty of Bowling Green State University, where she stayed for 27 years, teaching and exploring the relationships between geology, botany and ecology.

Forsyth’s research, which primarily focused on the glacial geology and Pleistocene geology of Ohio, helped advance knowledge about the age relationship of soils and tills to northern Ohio glacial geology. Forsyth co-authored the first glacial geological map of Ohio, authored two books and several textbook chapters, and wrote numerous articles about geology for scientific journals and mainstream publications. So great were Forsyth’s contributions to the interpretation of Ohio’s glacial deposits, her colleagues affectionately referred to her as the “Queen of the Pleistocene.”

Forsyth did not limit the sharing of her excitement and knowledge about Ohio’s geology to her students at the University. She was a frequent and popular lecturer for the Ohio Department of Natural Resources, municipal agencies, many teacher and naturalist groups, and several community organizations. Through her research, teaching, and volunteer efforts, Jane Forsyth greatly advanced understanding of the region’s ecosystems and biodiversity.

Each year since Forsyth’s death in 2006 at the age of 84, Bowling Green State University selects five outstanding students to receive a full-fee Forsyth Scholarship, an award honoring “the life and contributions of Jane Forsyth, one of Ohio’s pre-eminent scientists.”

“Dr. Forsyth had a major impact on me.’,” said Tom Denbow, Biohabitats Great Lakes Bioregion Leader. “I will never forget the day I saw a Scarlet Tanager at Indiana Dunes. She was the first to bang on the tents to get us up because there was ecology field work to be done, starting with looking up. This changed me forever.”