Balancing Acts: When dam removal is not an option

The Poutès Dam in France is currently being modified to aid fish migration. By applying adaptive management strategies such as technological innovation and multi-stakeholder dialogue, this pioneering project should deliver a win-win outcome.

Migration, interrupted Freshwater fish rank amongst the most endangered group of vertebrates on the planet, with populations plummeting by more than three-quarters over the past four decades. Damaged fish communities and declining fisheries characterise global freshwater environments, including those in Europe.

Habitat fragmentation is one of the principal reasons for this decline. While many freshwater fish need to migrate to complete their life cycles, water resource developments disrupt river connectivity, threatening biological diversity and fisheries. Along European waterways, hundreds of thousands of dams, weirs and smaller barriers block migratory pathways.

One such barrier is the Poutès Dam. Lying across the River Allier in central France (a tributary of the Loire), it has devastated the Loire-Allier wild Atlantic salmon population since it was constructed in 1941. 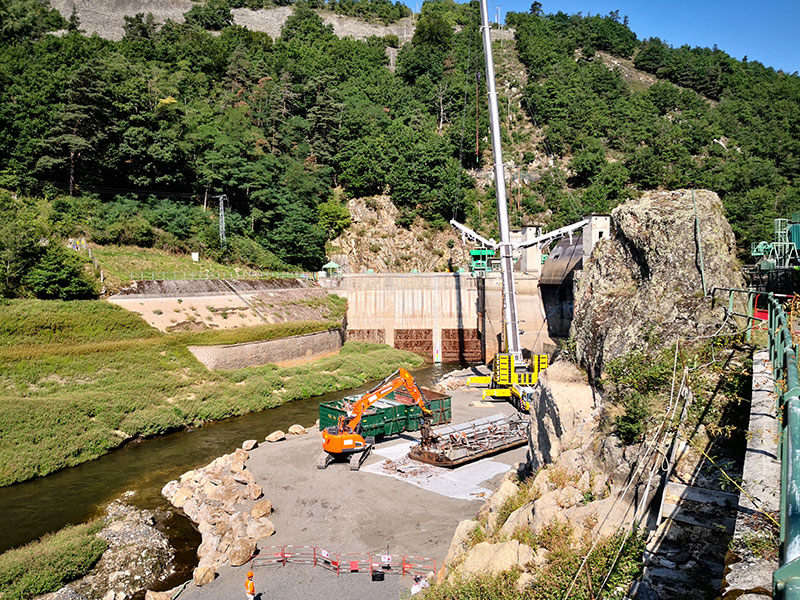 There were once 100,000 salmon in the Loire-Allier basin, making it one of the most fertile breeding areas in the whole of Europe. Today there are only a few adults left, despite the removal of and construction of fish passes on other dams in the catchment. With the Poutès Dam preventing salmon from reaching their most productive breeding sites, environmental NGOs and anglers have been campaigning for its removal since the early 1990s.

Innovative engineering Scheduled for completion in 2021, the New Poutès Dam will be a fraction of the height of its predecessor (4 metres, as opposed to 17 metres). The length of the reservoir behind it will also be reduced from 3.5 kilometres to around 350 metres, while fish migration and sediment transport will also be aided by the installation of two fully openable central sluice gates, as well as a fishway and a fish elevator. Despite changes to the dam’s configuration and management regime, its overall annual electricity generating capacity will only be 15% less than premodification levels.

“The new dam puts technical innovation at the service of biodiversity,” says Sylvain Lecuna of EDF, who heads up the New Poutès project. “This is a first in the world of hydropower. The goal of the project was to take into account all environmental and societal expectations, and I think we have reached the best possible solution.”

Underpinned by stakeholder engagement, adaptive management is a dynamic, iterative process in which practitioners test hypotheses and monitor results, adjusting behaviour, decisions and actions accordingly. Such a process is exemplified not only in the way that disagreement over the Poutès Dam was resolved, but also in the way the dam is currently being reconfigured, based on research carried out pre-modification. 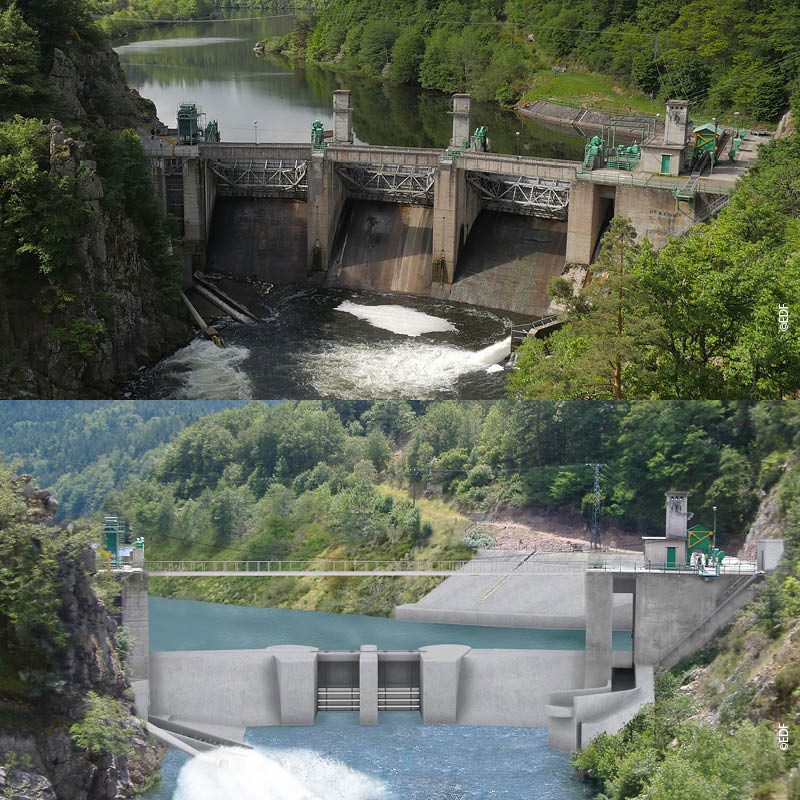 While well-designed and properly installed fishways can help fish negotiate barriers in rivers, the alteration of natural flow conditions by dams also has a negative impact on fish migration. River impoundment by reservoirs can dramatically change both downstream and upstream flow conditions, confusing fish species which have a natural tendency to orient themselves using water currents (a process known as rheotaxis).

In this respect, reducing the length of the reservoir created by the Poutès Dam should benefit localised fish migration significantly. This was confirmed by studies carried out by EDF and partners prior to the modification of the dam itself, when the reservoir had already been reduced in length from 3.5 kilometres to 1 kilometre.

Over the course of 2017 and 2018, smolts (two-yearold salmon ready to migrate to the sea) were captured upstream of the reduced reservoir, equipped with acoustic transmitters, and released into the Allier. This allowed the impact of the reservoir reduction to be accurately assessed.

“Our results show that reducing the length of the reservoir to 1 kilometre reduced the transit time for smolts from 20 days (median time) to just 3 hours, and that fish were able to find the outlet of the dam easily,” says Sylvain Lecuna. “In its final phase, the reservoir behind the New Poutès Dam will only be 350 metres long, so smolt transit times should be even lower.”

While transit times were improved, the studies also revealed the negative impact of the dam’s turbine intake, which was located close to the outlet. The decision was taken to screen off the intake with a fine grid to prevent smolts from entering it.

“Each year, when smolts are detected at the top of the Poutès reservoir, the water level will be lowered to its optimum level (for migration) and the turbines screened off, to mimic conditions created during the study trials,” explains Lecuna.

A reduced reservoir is not the only way New Poutès will benefit the migration of Allier salmon. The gates of the dam will also be opened three months a year to enhance riverine connectivity and facilitate unimpeded migration. This means more than 90% of the salmon in this stretch of the Allier will be able to negotiate the dam without obstacle.

“This complete permeability, with no flow restriction behind gates or dams, is particularly innovative,” says Sylvain Lecuna. In line with the adaptive management process, monitoring work will be conducted after the reconfiguration is complete to evaluate the number of fish crossing the dam when the gates are open. The fish elevator will also be monitored by cameras. The results generated will allow the impact of the modification to be assessed and fine adjustments to be made.

The removal or modification of a dam is never going to be a black-and-white issue, and it will always be a challenge to find mutually acceptable solutions to problems when multiple stakeholders are involved.

The innovative reconfiguration of dams can reduce their negative environmental impact, while simultaneously safeguarding the socio-economic benefits that such barriers deliver.

Yet the case of the Poutès Dam demonstrates how the potent combination of new technology and adaptive management can deliver change that satisfies and benefits all. It proves that the innovative reconfiguration of dams can reduce their negative environmental impact, while simultaneously safeguarding the socio-economic benefits that such barriers deliver (such as electricity). It also shows how changing the operation of a dam at critical times, based on robust science, can greatly facilitate salmon passage.

“The real takeaway here is that adaptive management has resulted in a dam that causes less environmental damage and which still provides useful services to society,” says Professor Carlos Garcia de Leaniz of Swansea University, Principal Investigator and Coordinator of AMBER.

Many European dams (such as the Poutès Dam) were constructed in the middle of the twentieth century, at a time when there was far less awareness of and concern for environmental issues. Yet in many cases, the complete removal of these barriers – while it may be environmentally desirable – is simply unfeasible, especially given the EU’s increasing commitment to renewable energy.

Only time will tell how successful the reconfiguration of the Poutès Dam has been in terms of meeting project objectives, while even complete success may not lead to a self-sustaining salmon population in the Allier River (which is influenced by a whole host of other factors). It is also important to bear in mind that the reduction in dam height and reservoir length implemented in this case is not an approach that would be viable at many dams. Nevertheless, progress made on the project to date suggests adaptive management tools and techniques may be invaluable when it comes to mitigating the detrimental impact of riverine barriers.

“In my opinion, the combination of technical innovation and multi-party dialogue is a fruitful strategy that should be replicated elsewhere in France and across Europe,” says Sylvain Lecuna.

“Both the hydropower industry and authorities can learn from New Poutès,” says Schneider. “Balancing ecological benefits, renewable energy production and investment, the project is a beacon of collaborative effort and adaptive management.”

Daniel Allen is an award winning journalist and photographer. His work has appeared in more than 60 publications, including The Guardian, The Independent and National Geographic Traveller.

Dam Removal in 3D: The Application of Stage 0 Design to Dam Removal