Climate change will impact European rivers in very different ways. In the face of such impacts, adaptive barrier management can help to enhance ecosystems and safeguard the services they provide.

Human infrastructure currently captures more than half of all available freshwater runoff, with global water withdrawal increasing by around 65 percent between 1979 and 2010. While dams, and the reservoirs they create, can have a devastating impact on wild nature, habitat, and natural processes, they can also provide multiple benefits to humans, through water supply, flood control, irrigation, navigation, recreation, and the generation of hydropower.

Accurately assessing and acting on the perceived benefits and drawbacks of dams and other barriers in freshwater systems is a complex proposition. And today, this task is further complicated by the process of climate change, which is increasingly affecting global weather patterns and the availability and use of natural resources.

Climate is a critical variable in a diverse range of ecosystem processes. This is especially the case in freshwater ecosystems, where it is strongly linked to hydrological and thermal regimes. With higher temperatures generally intensifying the global hydrological cycle, those managing riverine barriers must factor the impacts of climate change into both their short and long-term planning.=

“European freshwater ecosystems and the people who depend on them are already and will increasingly be affected in different ways by climate change,” says Ruedi Bösiger, Head of Freshwater at WWF Switzerland. “With barriers so ubiquitous in these rivers, barrier management must integrate environmental flow modelling – the flow needed to sustain a healthy freshwater ecosystem. Only by guaranteeing both the quantity and quality of water discharge can we ensure the long-term health and resilience of systems.”

Dams have a considerable impact on landscapes for two reasons. By altering water flows, they lead to changes in land use, as well as habitats both up and downstream. Additionally, changes to both flows and land use determine the scale of other impacts, such as water pollution, erosion, and biodiversity decline. The construction or removal of barriers, therefore, affects entire river basins and is not merely confined to rivers and their immediate surroundings.

The diverse ecosystem services derived from the presence of barriers means a wide variety of stakeholders and societal sectors are affected by barrier management. The provision of these services will also be significantly impacted by global warming.

“Going forward, our changing climate will amplify the complexity of human-water service interaction,” says Kinga Krauze of the European Regional Centre for Ecohydrology of the Polish Academy of Sciences at Lodz. “With dam construction, management, and removal lying at the core of Europe’s land-water-energy nexus, climate change must be taken very seriously.”

… river basins impacted by dams require a greater level of proactive management than those that are free-flowing, to mitigate the impacts of climate change.

Modelling the impact of climate change on hydrological flows means factoring in best and worst-case climate scenarios. Not only this, but those managing European barriers also need to factor in regional variations. Annual precipitation trends indicate that northern Europe has become up to 40% wetter over the last century, whereas southern Europe has become steadily drier. As a result, river discharge has increased in some regions and dropped in others. Moreover, there are more extreme events such as droughts and floods. Hence, higher average flows will not necessarily translate into more water in rivers.

Climate change may also have a marked impact on seasonal variation in European river flows, with higher temperatures pushing the snow limit upwards in northern Europe and mountainous areas. This, in addition to less precipitation falling as snow, will result in a higher winter runoff in northern European and mountain-fed rivers, such as the Rhine, Rhône, Po, and Danube. Less snow and diminishing glaciers will mean there is less water to compensate for low flow rates in summer.

“Europe’s melting glaciers may provide slightly more energy production over the next 20 to 30 years, but this will end as these glaciers disappear,” says Ruedi Bösiger. “At this point, residual environmental flows will become even more important for habitat connectivity and the mitigation of rising temperatures.”

Changes in the average availability of water in the majority of European river basins are estimated to be relatively small over the next three decades. Over the longer term, however, most climate change scenarios predict an increase in annual average river flow and water availability in northern and eastern Europe. In contrast, average runoff in southern European rivers is projected to decrease. Some river basins in the Mediterranean region, which are already facing high levels of water stress, may see severe decreases in water availability. This variation in flow will, in turn, affect river-related ecosystem services.

“The provision of such services is projected to decline across the board in the Mediterranean and Europe’s mountainous areas, while a mixed bag of gains and losses is projected for other European regions,” says Kinga Krauze. River regulation, more common in wetter parts of Europe, may alter the availability of water, and existing dams could potentially play a role in mitigating these effects. 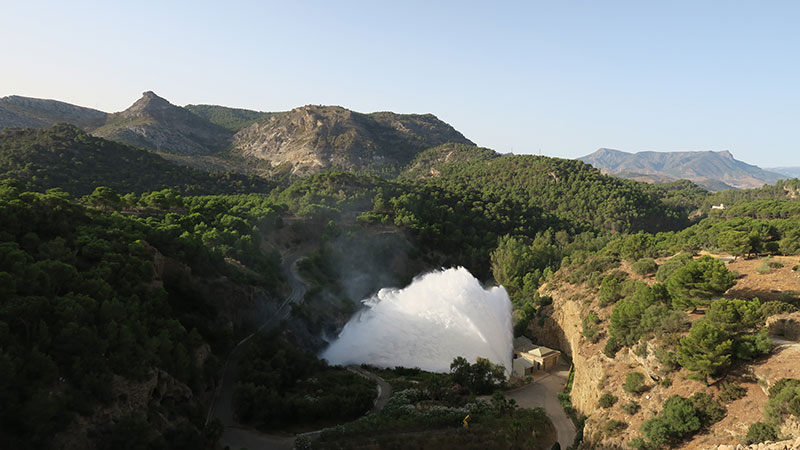 A recent study carried out as part of the AMBER project examined how climate change may affect the demand for and delivery of ecosystem services related to three European rivers and associated barriers – the Guadalhorce River (Guadalhorce Dam) in southern Spain, the Vistula River (Włocławek Dam) and River Mienia in central Poland, and the Neckar River in southwestern Germany, which are affected by multiple barriers used for navigation and hydropower (with more hydropower proposed on existing barriers).

“All three rivers and their barriers play an important role in ecosystem service provision,” says Krauze, who co-authored the report. “Our modeling shows that climate change will affect these services in different and localized ways, which is partly due to the varying impact on precipitation and temperature, and partly due to the mix of services being provided and how this will change over time. “From this perspective, barrier management, ecosystem service-based adaptation to climate change and the ongoing delivery of key services require an extensive understanding of the sensitivity of local systems.” On the Guadalhorce River, for example, the Guadalhorce Dam has disrupted habitat connectivity, impacted local animal species populations, and created an irregular flow regime, characterized by flash floods that have caused extensive damage in recent years. On the other hand, the dam and its reservoir generate hydropower and provide water for agriculture. “As a result of climate change, leading to increasing temperatures and decreasing precipitation, demand for water supply for local agriculture could significantly increase over the coming decades,” says Krauze. “The way the Guadalhorce Dam is managed may need to take this into account.” For example in the River Mienia, in the Polish lowlands, the impact of the dam appears to exceed the impact resulting from changes in flow regime.

Nobody knows for sure what the Earth’s climate will be like 100, 50, or even ten years from now. Yet it is already clear that river basins impacted by dams require a greater level of proactive management than those that are free-flowing to mitigate the impacts of climate change on both people and wild nature. As the recent AMBER study shows, it is also clear that such management needs to take place at an appropriate temporal and spatial scale.

Prioritization processes have already been developed to evaluate dams and other barriers for mitigation (and possible removal). Historically, most of these used score and rank techniques, where barriers within a given area were either scored on their ecological, physical, and financial impacts or ranked for mitigation under given budgetary constraints. More recently, optimization-based models have taken better account of the cumulative effect of multiple barriers across entire river systems.

Both score and rank systems and optimization approaches are intrinsically designed to incorporate additional variables, such as the altered hydrological flows resulting from climate change. Some scientists have already included future climatic conditions when modeling economic losses (reduced water supply and hydropower) and environmental gains (increased habitat for fish) for optimizing dam removal.

In Europe, striking the right balance between competing socio-economic interests and ecological impacts has already proved challenging for those managing riverine barriers. The need to include climate change as a critical consideration in barrier management will add another layer of complexity, particularly in situations where climate change is judged to be increasing both the environmental impact and economic value of stored surface water. By taking into account the needs of various stakeholders and continually evaluating multiple variables over time, adaptive management can not only help to minimize conflict but also identify optimum solutions in terms of enhancing ecosystems and safeguarding the services they provide. “Even if we manage to reduce greenhouse gas emissions in the years ahead, climate change, to varying degrees, is still locked in,” says Kinga Krauze. “For many barriers on European waterways, this means that adaptive management will become an increasingly necessary and beneficial tool.”

Facing the Challenges of Dam Removal in Alaska