Facing the Challenges of Dam Removal in Alaska

By Brad Meiklejohn, The Conservation Fund

The Conservation Fund has nearly completed the demolition of the long-abandoned Lower Eklutna River dam, near the Native Village of Eklutna, Alaska. The Lower Eklutna River Dam Removal Project is the most ambitious river restoration project ever attempted in Alaska. 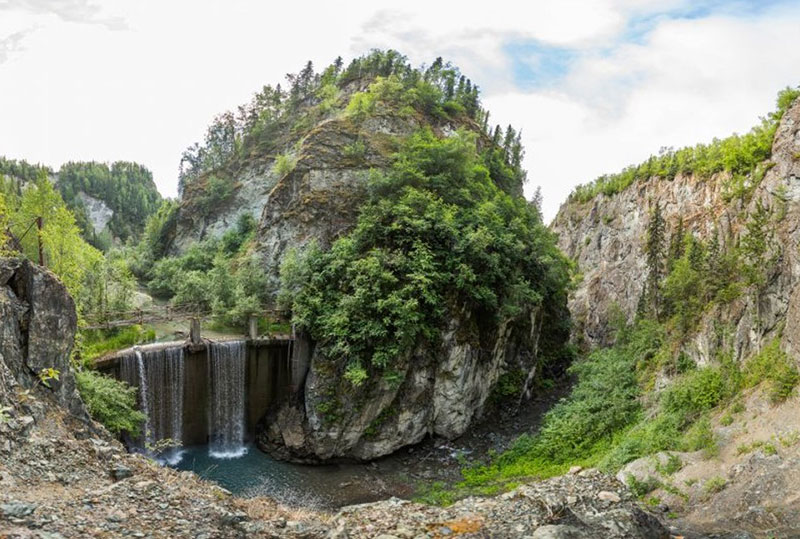 The Lower Eklutna River Dam was built in 1928 as part of Alaska’s first hydroelectric project. Located in a dramatic 400-foot deep canyon, access to the dam site was a severe challenge during the construction (and demolition) of the dam. In construction, a tram cart delivered concrete down the cliff face to the workers below.  This hardy crew worked throughout an entire Alaskan winter to complete the dam in a year’s time.

The dam itself was a concrete arch whose dimensions were 70 feet wide, 100 feet tall, and 9 feet thick at the dam base. This structure pooled and diverted water through a half-mile tunnel to a generating station nearby. Power ran by wire twenty miles south to Anchorage, providing the first reliable supply of electricity to this frontier settlement.  The Lower Eklutna power project operated until the early 1950s when it was decommissioned and ultimately abandoned. Ownership of the dam remained in limbo until the Alaska Native Claims Settlement Act conveyed the dam and all the surrounding land to the Eklutna Village Native Corporation. 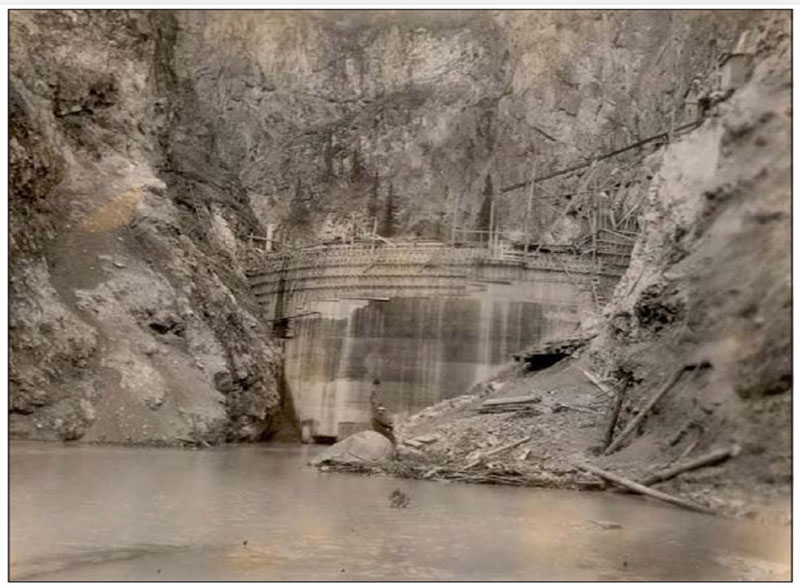 The Lower Eklutna Dam under construction ©The Conservation Fund

The Eklutna River was once a prolific salmon-producing river that supported the Eklutna Dena’ina people, who located their village on Cook Inlet’s Knik Arm near the mouth of the Eklutna River. Although the Native Eklutna people are still there, the salmon are greatly diminished, due to a succession of water diversions and hydropower projects which cut off water flow and fish passage in the Eklutna River. Repeated studies over several decades have recommended the removal of the Lower Eklutna River dam as an essential first step in restoring the Eklutna River. 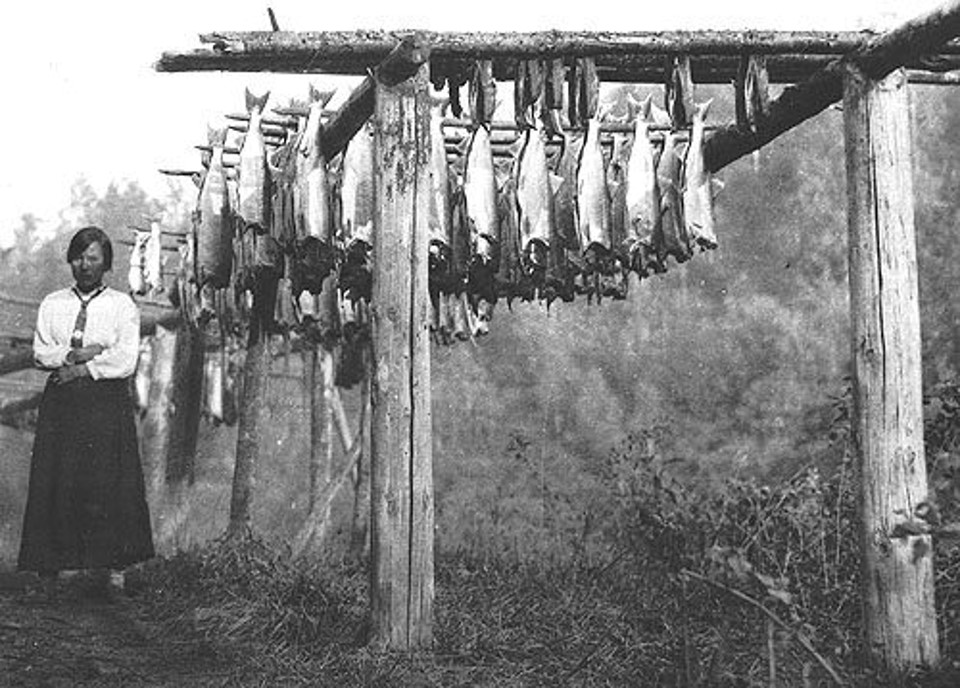 Despite being decommissioned in the 1950s, the Lower Eklutna dam survived the 1964 Alaska Earthquake (magnitude 8.2) with no signs of impairment. Though the dam remained structurally sound and showed no imminent signs of failure, the State of Alaska Office of Dam Safety had long-recommended its orderly removal. Because the structure was an orphaned, unmaintained dam upstream of three bridges, a major highway, and a railroad, there was significant public safety benefit to removing the dam in a controlled manner rather than waiting for its ultimate failure. 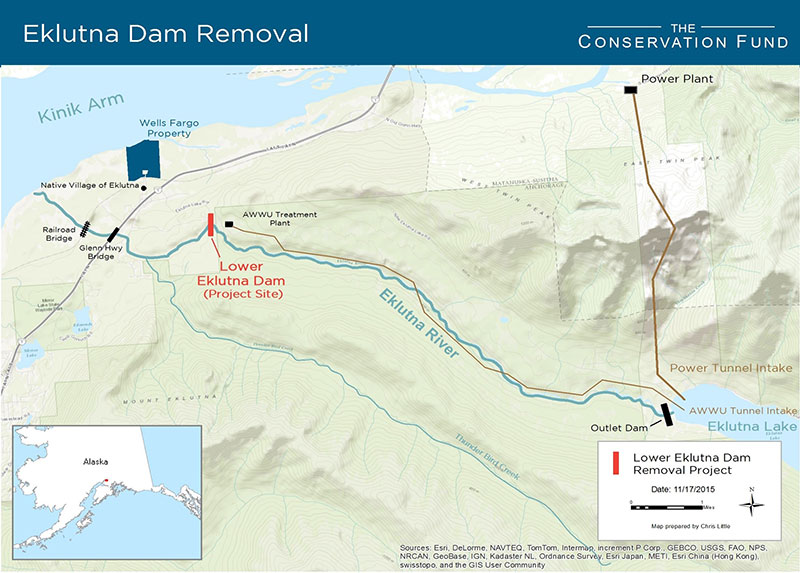 Although removal had been discussed for decades, The Conservation Fund began to actively pursue the dam removal in 2014. After identifying key partners, in collaboration with Eklutna Inc. (the Eklutna Native village corporation and landowner) and HDR (primary technical consultants for the project), the Fund initiated project scoping, baseline research, and assessment of construction methodologies in 2015. With necessary permits secured in 2016, site preparation was completed in fall of 2016. The 2017 work season saw the removal of 90% of the dam structure, the remainder of which should be entirely removed this spring. Site remediation and negotiations for the restoration of in-stream flows and monitoring of spawning, turbidity, and sediment transport will continue into 2020 and beyond.

Funding for the $7.5 million project was provided largely by The Conservation Fund, with additional financial support from the Rasmuson Foundation, the M.J Murdock Charitable Trust, the National Fish and Wildlife Foundation, the Open Rivers Fund of the Hewlett Foundation, Resources Legacy Fund, the Marnell Corporation, the Alaska Sustainable Salmon Fund, Patagonia, Orvis, Wells Fargo, and the Alaska Community Foundation. 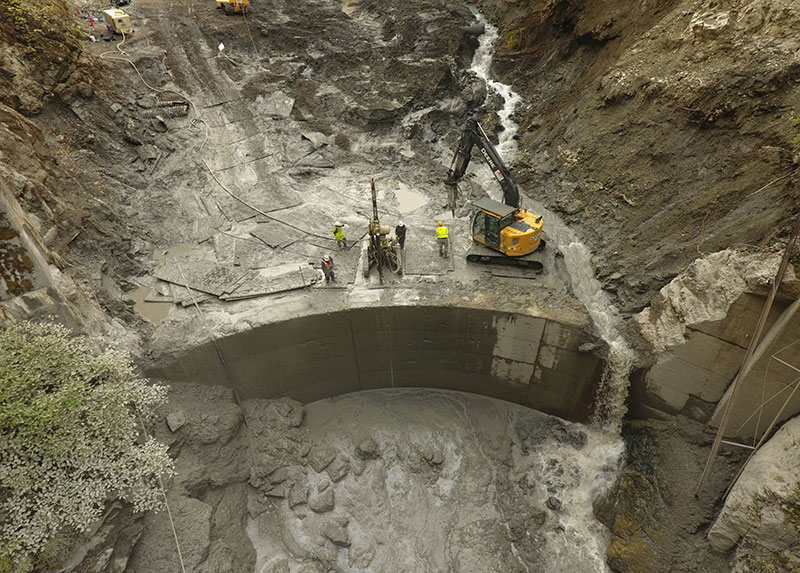 While most major dam removals take decades to complete, this project has gone from concept to near-completion in only three years. The rapid advancement of the project is due in large part to the fact that most of the money came from private sources, short circuiting the lengthy delays that inevitably come with government funding. With a backlog of thousands of deadbeat dams that are slated for removal across the nation, this project serves as a model of efficiency and cost-effectiveness.

In addition to the funding challenges, there were severe technical challenges to the project.  The Lower Eklutna River dam is located in a 400-foot deep canyon with sheer walls and no road access. Accessing the dam involved the installation of the state’s largest crane with a 400-foot reach and construction of a dramatic 500-step aluminum staircase into the canyon. An additional complication was working on and around the 70-feet deep accumulation of 300,000 cubic yards of silt, sand, and gravel that had built up behind the dam following its abandonment in 1955. Combined with the tight confines of the canyon, these unstable and dynamic sediments required caution and creativity.

Concerns for the downstream infrastructure ruled out blasting the dam. Instead, a combination of fracturing with expansive grout and hammering with pneumatic jackhammers was used to break the dam down into bite-sized chunks. Sediment management techniques included 10-foot by 20-foot polycarbonate “tundra mats” to keep the machinery out of the LaBrea-tar-like muck and a hydraulic mining monitor to move the sediment away from the work area. 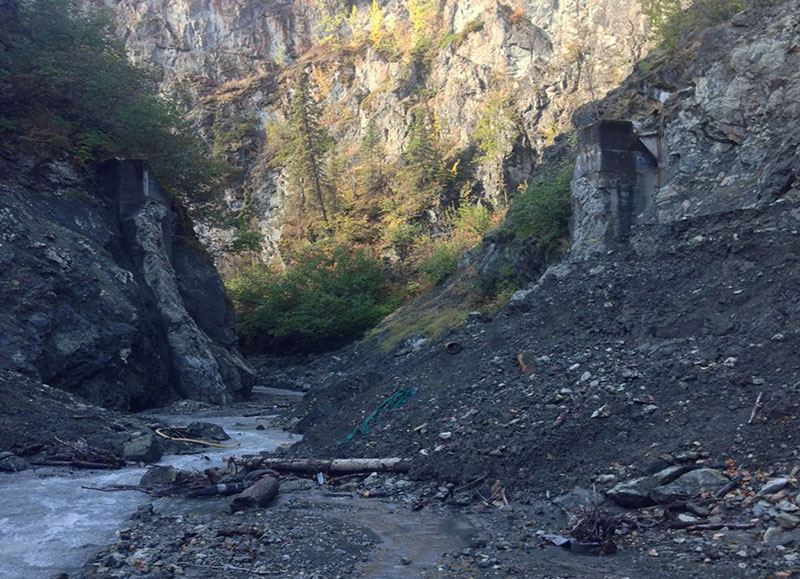 Removing the Lower Eklutna River dam has already provided significant economic benefits by creating more than 30 jobs in construction, research, and project management for Native Alaskans through the partnership with the Native Village of Eklutna and the Eklutna Native Corporation. Additional benefits to all Alaskans include the recovery of Cook Inlet King Salmon and the potential restoration of a major Sockeye Salmon run just 30 minutes from Anchorage. Restored salmon runs will also help the endangered Beluga Whale with additional forage fish sources.

Although removal of the Lower Eklutna River dam will not by itself rebuild salmon runs to their historic levels, the mere presence of the dam has thwarted any other restoration efforts. The main limiting factor for salmon in the Eklutna River is very low water due to hydropower diversions. The Eklutna Power Project, a federal project further up the watershed from the Lower Eklutna dam, diverts 90% of the water out of the Eklutna watershed into a tunnel that services a powerhouse located on the Knik River. The power producers, a consortium of three utilities, have long argued that releasing water into the Eklutna River is pointless as long as the lower dam remains in place. 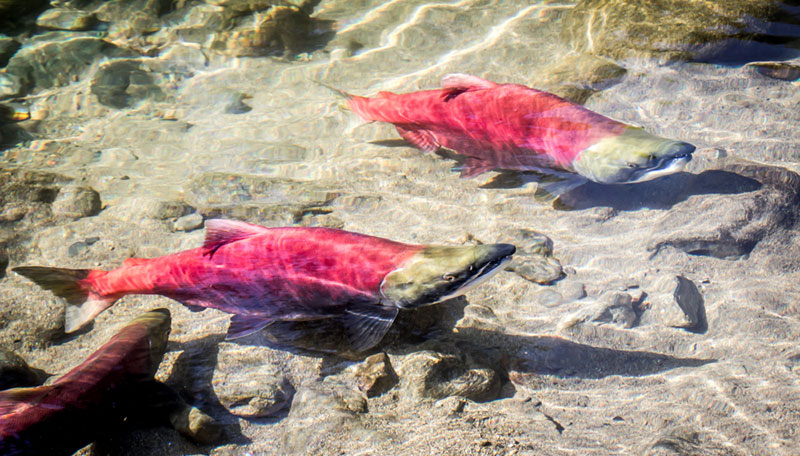 Beyond the significant conservation benefits that will result from removing the Lower Eklutna River dam, this project has greater symbolism. One reason Alaska still has abundant salmon is because we have mostly avoided the mistake of building dams on salmon-bearing rivers. At the Eklutna River, Alaskans are recognizing the problems created by an ill-considered dam and are collaborating to fix those problems. We hope this project will be a constant reminder to Alaskans and other Americans that salmon and dams are generally incompatible. 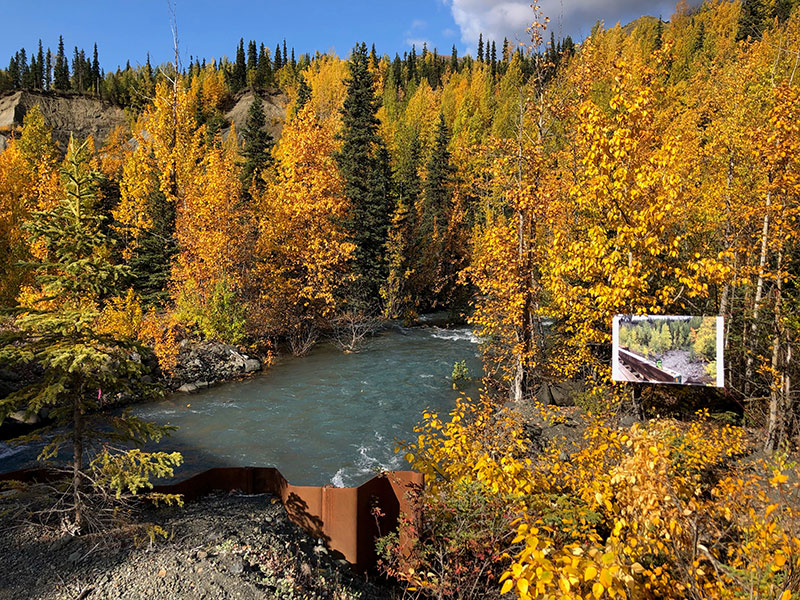