Europe’s waterways are fragmented by all types of barriers. To mitigate their impacts, we need to think big and manage adaptively.

Humans have interacted with and depended on rivers for millennia. Today, thanks to man’s desire to govern and harness nature, less than 20% of European rivers and floodplains remain physically unaltered. The remainder are fragmented and disconnected by hundreds of thousands of artificial barriers. 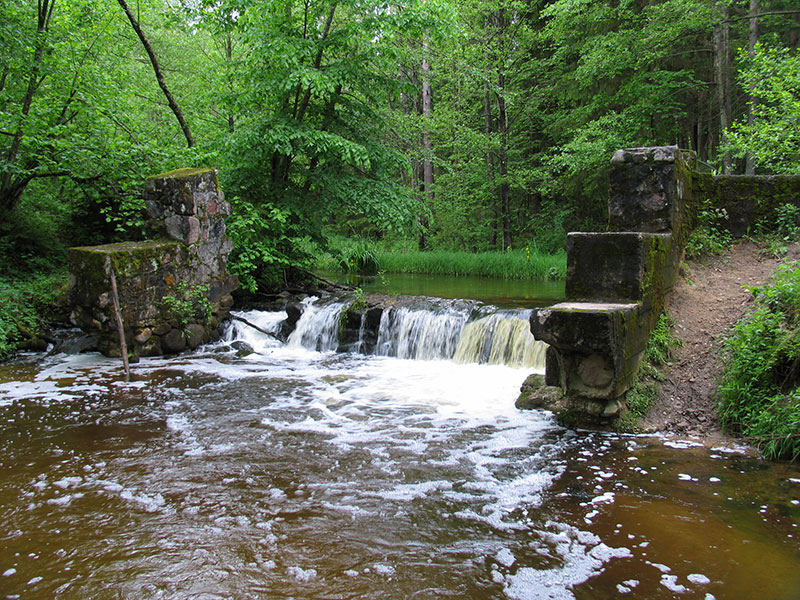 The growing role of adaptive management is a key trend in the way freshwater barriers are operated. The goal of the AMBER project is to facilitate the application of such management techniques—an iterative process of decision making, monitoring, and adjustment—to barrier operation in European waterways. This has the potential to not only enhance riverine connectivity and biodiversity but improve energy security, protect jobs, and boost competitiveness.

Yet adaptive management is not a panacea. The average European waterway is filled with various types of barriers – some have a range of functions, some a single function, and many no function at all. Adaptive management may allow for some of these barriers to be removed, downsized, mitigated, or operated in a less damaging way. But this may not be appropriate in every situation. 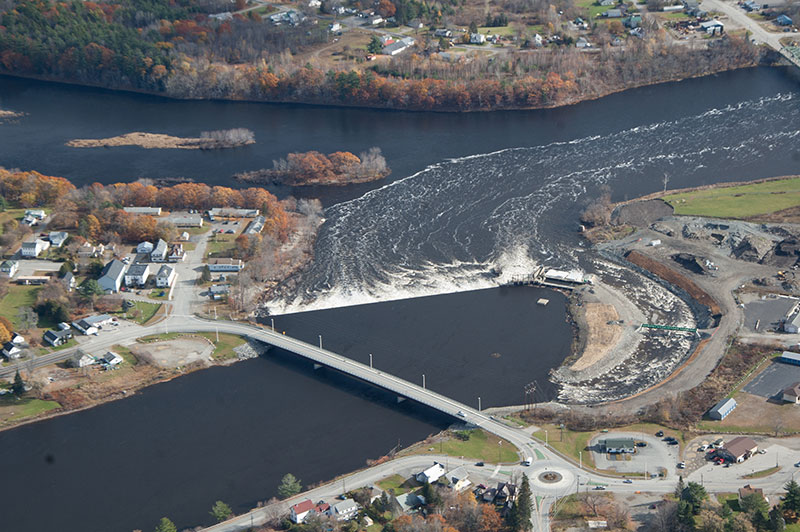 The nature-like fishway constructed on the Howland Dam on the Penobscot River ©Joshua Royte, TNC Maine

Before considering the application of adaptive management, it’s essential to examine the environmental impact of relevant barriers more closely.

The German economist E.F. Schumacher popularised the phrase “small is beautiful” to describe technology that minimized social and environmental impacts. When it comes to dams, Schumacher’s time-honoured adage is often interpreted literally and taken as read. It’s not hard to see why: the term “small hydropower” generally brings to mind a quaint dam beside a German watermill. This image is in stark contrast to the towering large—hydro facilities such as the Alqueva Dam in Portugal or Hoover Dam in the United States that radically transform entire landscapes.

But does small hydropower warrant its reputation as being environmentally benign? 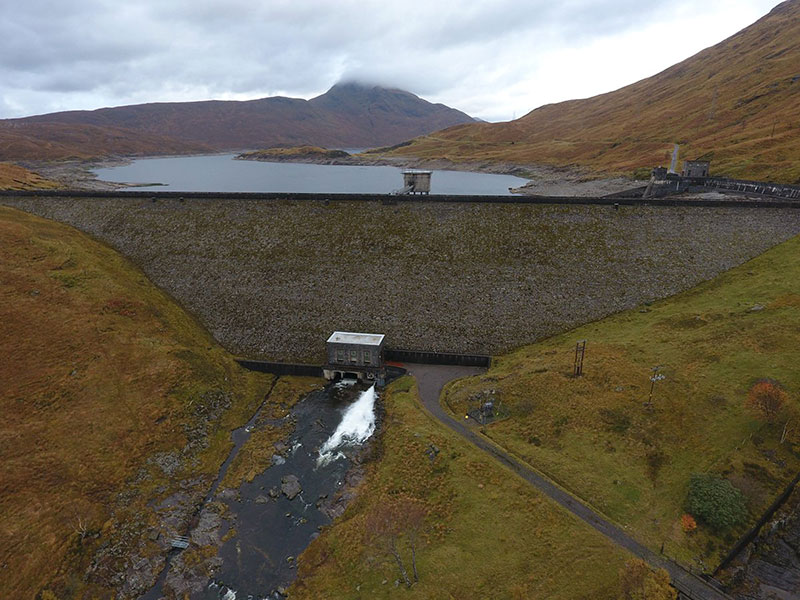 The Quioch Dam on the River Garry is the site of one of the AMBER case studies ©Shobhit Pipil, Durham University

“A small barrier can still break connectivity and be incredibly harmful in a biodiversity hotspot,” says Ruedi Bösiger, Head of Freshwater at WWF Switzerland. “However, a big barrier in the upstream part of a river catchment can be less detrimental than a dam lower down a basin on an important tributary.”

In fact, when it comes to hydropower, small frequently isn’t beautiful at all. Small dams are often more numerous and can have severe impacts on habitats and biodiversity while generating comparatively little energy on a per-site basis.

“In terms of big versus small, the question is how to maximize the use of hydropower potential in a region while minimizing barrier-related impacts,” says Claus Till Schneider of German energy company innogy. “Just as the environmental impact of multiple small barriers can be cumulative, we have to take into account the total energy output of such barriers too.”

Ruedi Bösiger goes further. “If the objective is to restore connectivity, then barrier removal will always be the optimal solution,” he says. “But if it has to be a case of big or small, then we need to improve the effectiveness of big dams in terms of energy production, fish migration and sediment transport, rather than having hundreds of small dams producing roughly the same amount of energy.” 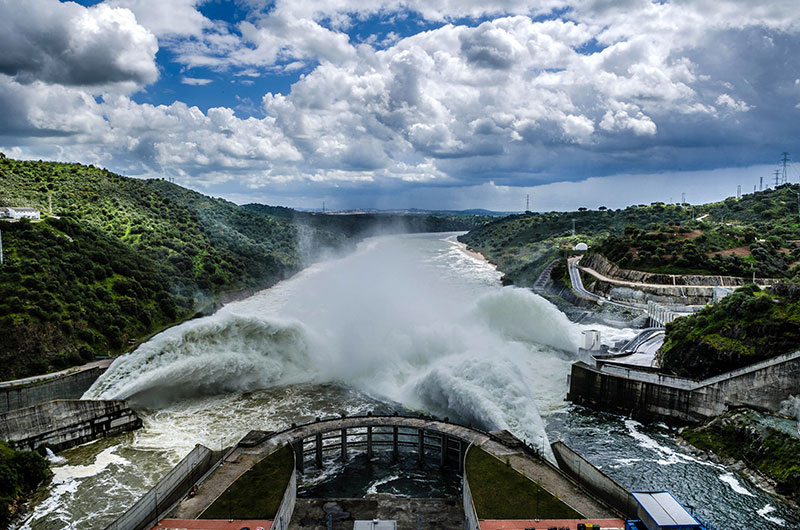 Until recently, the hydropower sector was largely focused on the construction and operation of individual power-generating facilities. While there are compelling reasons for working in such a way, this can severely constrain the sustainable development of waterways from a source-to-sea perspective.

“This strategy is essential, not only from a hydropower viewpoint but also from an environmental viewpoint,” says Johan Tielman, the environmental manager for Swedish hydropower within Uniper, a German energy company Uniper. “What happens upstream clearly affects downstream values and vice versa. The entire river basin needs to be considered as a single social-ecological system. Actions in the upper part will affect the hydrology downstream. The general approach should be to work from the lower parts of the system and upstream, at least if you deal with anadromous species. This will have consequences both for what can be achieved to benefit the ecology and ecosystem-services but also the energy generation and regulatory capacity in hydropower.”

Adaptive management is well-suited to handle the level of complexity involved in basin-scale planning. Moving away from the top-down decision making, expert-dominated approaches of the past, it can help to bring stakeholders together, both to evaluate opportunities and risks, and to form a consensus for sustainable and equitable development.

A case in point

A key element of adaptive management and the transition to more adaptive management regimes is the participation of all stakeholders (as opposed to only policymakers) in decision-making processes. Showcasing the benefits of adopting a basin-scale, multi-stakeholder approach to managing hydropower, the Penobscot River Restoration Project in the northeastern United States is the perfect example of what can be achieved when a broad consensus leads to barrier removal and mitigation.

Atlantic salmon, shad, alewives, blueback herring, and other migratory fish were once plentiful along the 175-kilometre Penobscot River. Then, around a century ago, a series of hydropower dams were built across the river. With migration routes blocked, fish populations collapsed. Starting in 2004, a process of multi-stakeholder engagement eventually led to the removal of two dams in 2012 and 2013, while a fishway was built around a third in 2016. The results have been dramatic. Before the dams were removed, the number of blueback herring traveling up the river to spawn each year was anything between a few hundred and a few thousand. In 2018, following removal, nearly 3 million were counted in the Penobscot watershed.

Yet perhaps the most telling aspect of the Penobscot project is that the restoration of fish migration routes has not come at the expense of hydropower. By increasing power generation on other dams, the forecasted energy generation from the entire basin will remain the same, and may even increase. “This illustrates a basic principle,” says Ruedi Bösiger. “Within a river basin, there may be multiple ways to achieve a given energy target, and these alternatives can have dramatically different environmental impacts.”

The entire river basin needs to be considered as a single social-ecological system.

A river’s flow is its heartbeat. Of all the environmental changes caused by riverine barriers, the disturbance of natural water flows is typically the most damaging. The interruption of sediment transport and nutrient cycling, alteration of upstream habitat, disconnection of river channels from their floodplains, and changes to the timing and regularity of downstream flows – all of these factors can have a hugely negative impact on ecosystems and their processes.

Adaptive management can lead to the regulation of flows downstream of dams to mimic natural flows, with highflow events integrated into management plans in a scientifically grounded way. Managed well, this variance in flow can enhance fisheries, agriculture, and biodiversity. This highlights the need for dams to be built (or modified) and operated with the capacity to provide the full range of flows required for adaptive management. The reconfiguration of the Poutès Dam on the Allier River in France, for example, will partially restore both sediment transport and fish migration by incorporating fully openable sluice gates.

Revitalizing river and riverine biodiversity by removing barriers is sadly not as straightforward as it might seem. While barrier removal restores connectivity, it may also facilitate the dispersion of aquatic invasive species (AIS). Increasingly common in European waterways, AIS can pose a severe threat to endangered populations of endemic fish and other aquatic organisms.

The particular vulnerability of freshwater ecosystems to AIS is hardly surprising, given the frequent episodes of introduction and translocation of species from other river basins in ballast water, or for fisheries and aquaculture. An example is the signal crayfish (Pacifastacus leniusculus), which is now established in the waterways of many European countries. Originally a North American species, it modifies aquatic ecosystems, competing with native species, spreading disease, and burrowing into riverbanks, which in some cases exacerbates erosion.

“The potential impact of AIS is an increasingly important consideration when it comes to adaptive management,” says Dr. Martyn Lucas, Associate Professor in Aquatic Animal Ecology at the University of Durham in northeast England. “It should form part of the decision-making process when it comes to removing or constructing barriers, as well as the installation of barrier mitigation measures such as fishways.” 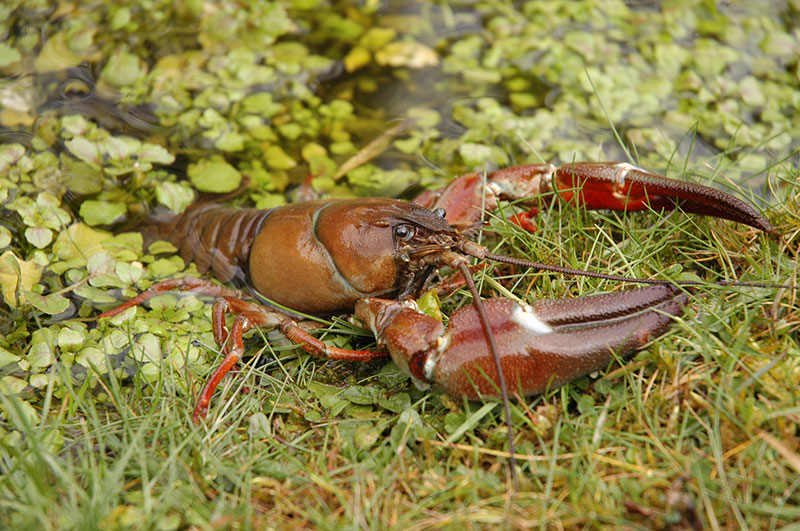 The signal crayfish, Pacificas leniusculus, is originally a North American species but is now an invasive species in several European rivers ©Trevor Renals

Today the combination of climate change, population growth, economic development, expansion of irrigated areas, and the pervasiveness of invasive species means it is becoming increasingly difficult to manage European rivers—and their barriers—without a flexible, dynamic, and collaborative approach.

Adaptive management can sometimes be an expensive and time-consuming process, and its effectiveness may be constrained by the irreconcilability of stakeholders. But there is a significant potential benefit in applying its central elements in European barrier management.

“In my opinion, when it comes to smaller scales, for example, a few smaller barriers or even a single larger barrier with few stakeholders, adaptive management is not feasible,” says Birnie-Gauvin. “But when you’re talking about international river basins with multiple stakeholders, multiple barriers, and multiple socio-economic and environmental variables, this is where such an approach can generate win-win solutions.”

Daniel Allen is an award winning journalist whose work has appeared in more than 60 publications, including the Guardian, The Independent, and National Geographic Traveller.

Balancing Acts: When dam removal is not an option