It's the Decade on Ecosystem Restoration. So what?

Beyond the pomp and circumstance—what does the UN Decade really involve, and what can it mean for those of us who study and practice ecological restoration?

For those of us who are not, say, a UN Delegate, diplomatic staffer, or representative of our country’s environmental governing body, the multitude of international conventions, treaties, agreements, and initiatives can sometimes seem like a jumble of highly aspirational, but disparate high-level commitments that have no connection to our daily work and lives. There is the Paris Agreement, the Convention on Biological Diversity, the 2030 Agenda for Sustainable Development, and more. Then there are global and regional initiatives such as the Bonn Challenge, New York Declaration on Forests, Initiative 2020, AFR100, ECCA30, Caucasus, and the Agadir Commitment.

On March 1, 2019, Lina Dolores Pohl Alfaro, then Minister of Environment and Natural Resources for the nation of El Salvador, approached the podium in the Assembly Hall of the United Nations and proposed something that links and advances all of these efforts—to each other and to the work we do: a “United Nations Decade on Ecosystem Restoration.”

“Ecosystem degradation leads to a loss of critical ecosystem services, adversely impacting the well-being of at least 3.2 billion people around the world, and increasing, moreover, their vulnerability to the effects of climate change,” said Pohl in presenting draft resolution A/73/L76 to the UN General Assembly. “Reversing this reality is possible through actions in tune with nature. Ecosystem restoration, with a holistic approach, can generate tangible benefits that will increase food and water security and further contribute to conserving biodiversity as well as efforts to mitigate and adapt to climate change.”

The United Nations swiftly adopted the resolution, which was sponsored by 61 nations, and declared 2021-2030 to be the Decade on Ecosystem Restoration.

Even before the idea for a Decade on Ecosystem Restoration was first publicly mentioned at a Bonn Challenge event in 2018, El Salvador had already made an ambitious commitment to restore one million hectares—half of its landscape—by 2030. 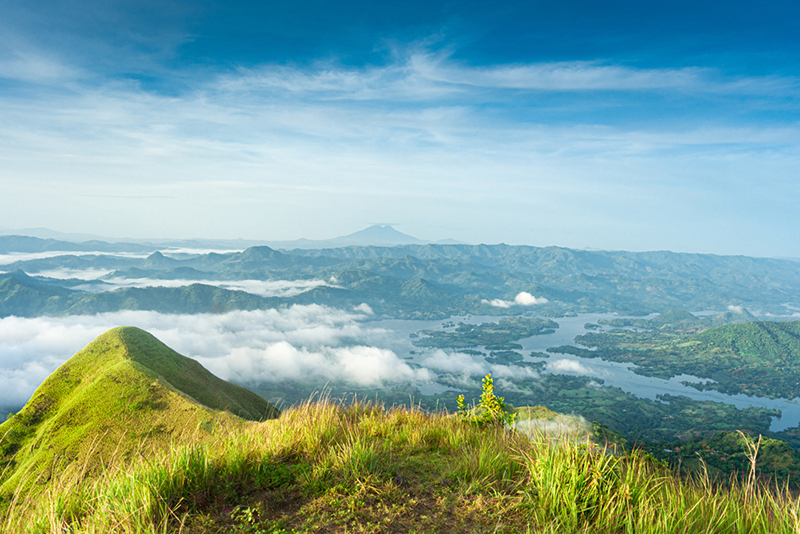 “My country is one of the most vulnerable countries around the world,” said Pohl in an interview with the Global Landscapes Forum soon after the resolution was adopted. “In the past decade, we have not only seen how natural resources have deteriorated, but [we have come to] know the threat of climate change firsthand.” Seeing the risk climate change was posing to the well-being and livelihoods of El Salvador’s people, compelled Pohl to ask herself, “What can I do to make a direct impact?” She and her colleagues ultimately landed on the idea of a decade dedicated to scaling up ecosystem restoration across the planet. “I truly believe that it is possible,” she said.

I truly believe that it is possible.

The UN Decade on Ecosystem Restoration officially began on June 5, 2021, which was World Environment Day. It defines ecosystem restoration as all activities that are part of the “Restorative Continuum,” which spans from reducing degradation to fully recovering native ecosystems.

With an initiative so massive in scale, scope, and duration, it is not surprising that its overall goal is both bold and broad: to prevent, halt and reverse the degradation of ecosystems worldwide. The UN Decade is, however, meant to advance achievement of targets defined by the many existing international conventions and agreements and accelerate ongoing global and regional initiatives. Running through 2030, it is also specifically designed to support the Sustainable Development Goals of the 2030 Agenda. 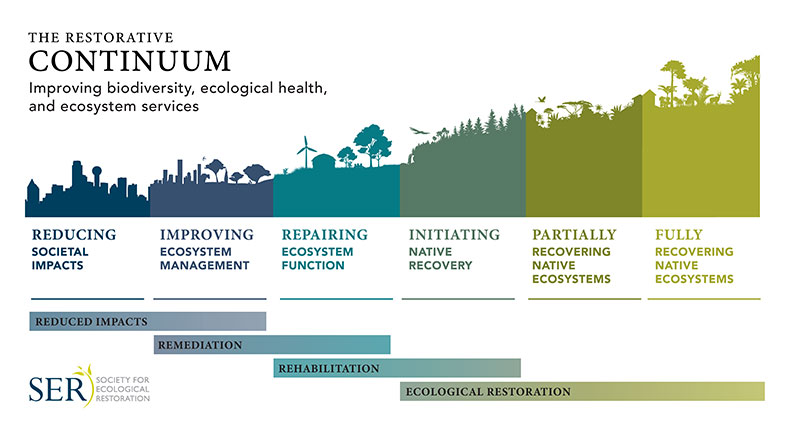 “The UN Decade is a platform for putting commitment into practice and supporting the Sustainable Development Goals,” said Jean-Philippe Schwab of the United Nations Environment Programme (UNEP).

In his role as Partnership Coordinator for the UN Decade, Schwab coordinates the program’s expansive, multi-layered network of partners. This includes strategically analyzing and developing both partnerships and partner activities. At the foundational level of this network are the two UN agencies leading the effort: the UNEP and the Food and Agriculture Organization of the United Nations (FAO). Several other UN agencies and conventions, such as UNESCO, the World Health Organization, and the Convention on Biological Diversity are collaborating partners. Other Decade partnerships exist in the form of Funding Partners, such as the European electric utility company, E.ON Group, and the German and Finnish governments; Global Partners, such as Conservation International, the Global Landscapes Forum, and the Society for Ecological Restoration; and Supporting Partners, such as Initiative 20X20, Wetlands International, and the Foundation for Environmental Education. There are also UN Decade “Actors,” who are committing to take action—both on the ground and in communication promoting the Decade—for positive change.

In the UN Decade’s virtual launch, UN Secretary General Antonio Guterres said the initiative will “draw together political support, scientific research, and financial muscle to massively scale up restoration.” The strategy for achieving this is built around 10 key actions:

Although the UN Decade is only nine months into its existence, its organizers and partners have already made substantial process in implementing this strategy.

A survey conducted by the team behind the UN Decade revealed that one-third of those involved in on-the-ground restoration find funding to be their biggest hurdle, and the strategy to “Finance restoration on the ground” is not merely a talking point.  The UN Decade’s organizers are serious about providing funding to support a massive scale up in global restoration.

The UN Decade has established a Multi-Partner Trust Fund (MPTF), a financial engine to support action and scale up existing successful efforts in developing countries, particularly those involving women and Indigenous people. The MPTF was created before the launch of the UN Decade and is expected to remain operational until the end of November 2030. It has already received over $16 million from the government of Germany, a Funding Partner. Its long-term goal is $100million over the course of the decade for strategic support to “Flagship Initiatives.”

Identified as the first, best, or most promising examples of large-scale and long-term ecosystem restoration in a country or region, Flagship initiatives are envisioned as efforts that will “spur an informed and coordinated movement” and turn the tide of ecosystem degradation. In addition to their restoration outcomes, they are intended to inspire others to undertake or accelerate restoration across the globe. The call for nominations for Flagship Initiatives went out in January 2021 and remains open at the time of Leaf Litter’s publication.

As outlined in the UN Decade strategy, the Great Green Wall, an African-led movement to combat land degradation, desertification and drought by restoring an 8,000 km, cross-continental band of land from Senegal to Djibouti, was selected as one of the first Flagship Initiatives of the UN Decade. To kickstart the Multi-Partner Trust Fund, two additional efforts – one in the Central American Dry Corridor and one in selected Small Island Developing States – are being proposed as the next Flagship Initiatives. According to Schwab, the first ten World Restoration Flagship Initiatives are expected to be announced in 2022.

There is also regional action underway. In Latin America and the Caribbean, for example, there is already an Action Plan in place to guide restoration efforts in the UN Decade. Crafted around the “pathways” of generating public awareness and education, increasing political engagement, and building technical capacity, the plan details ten regionally-specific actions to promote, support, and accelerate ecosystem restoration. The Working Group on Biodiversity of the Forum of Ministers of Environment of Latin America and the Caribbean will guide implementation of the Action Plan and ensure that Member States are fully involved in its planning, execution, monitoring, and evaluation.

Progress has also been made in the development of a powerful tool with the potential to support all elements of the UN Decade’s strategy: the Digital Hub. According to Schwab, the Digital Hub will be a resource for anyone, anywhere, who is interested in implementing, learning about, or supporting ecological restoration on the ground.

“The purpose of the Digital Hub is to absorb the interest and use technology to link it to whoever has the answers,” said Schwab. “We expect the Hub to become a ‘Yelp’ for everything restoration related and a global restoration movement.”

Continually developing and expanding, the Digital Hub will be a marketplace with participatory functionalities for all kinds of users. The Digital hub can, for example, connect a landowner or manager lacking the resources to implement a project with a funder seeking to support or invest in ecosystem restoration. It can link those needing specific technical expertise with those able to provide it. It can facilitate the exchange and spread of knowledge across continents and the globe. It can also spark and renew a global drive for restoration implementation by fostering a community of practitioners, researchers, and supporters.

Among the many resources currently available on the Hub are a community organizing toolkit for people who want to take action to restore local ecosystems; news about restoration-related action and events; a growing showcase of restoration initiatives, and an Ecosystem Restoration Playbook describes approaches to restoring eight key types of ecosystem – forests, farmlands, grassland and savannahs, rivers and lakes, oceans and coasts, towns and cities, peatlands, and mountains.

The Digital Hub also includes communication materials such as videos, graphics, social media cards, and sample messages that anyone can use in promoting ecosystem restoration and the UN Decade. According to Schwab, these materials, along with the UN Decade’s hashtag, “#generationrestoration” are being widely used and helping to significantly raise awareness of the need for and benefits of ecosystem restoration “The attention to the topic has been a key asset so far,” he said.

The Decade’s leading agencies, along with the IUCN, the Commission on Ecosystem Management, the Society for Ecological Restoration, and other Decade partners, advanced progress toward addressing that question by collaborating to develop Principles for Ecosystem Restoration to guide the UN Decade. As reported in our Nonprofit Spotlight featuring the Society for Ecological Restoration, Standards of Practice tiered to these principles are also being developed. 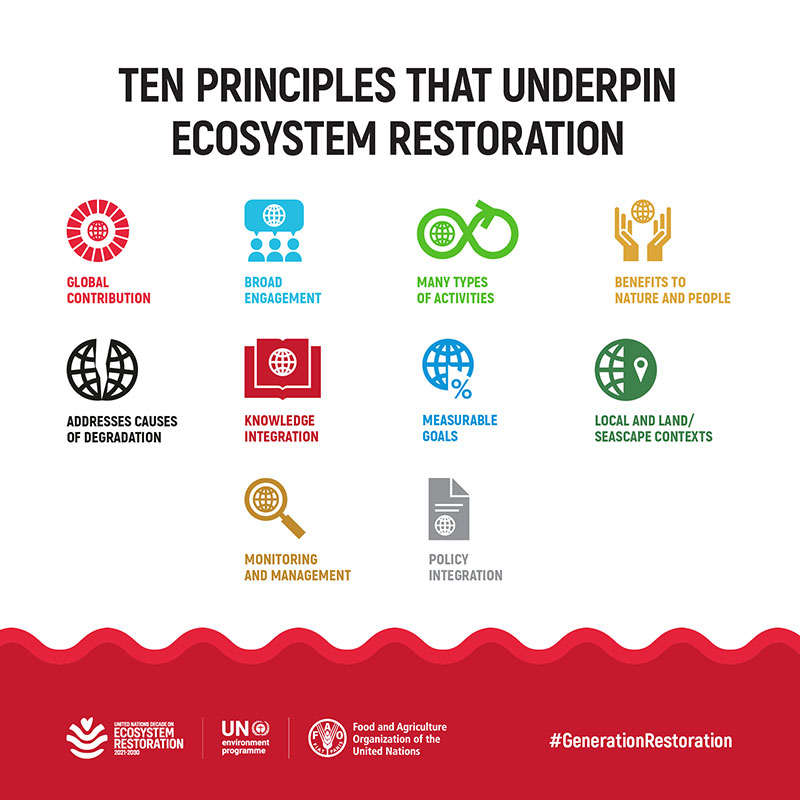 When it comes to the environment, humans are often thought of in terms of their contributions to degradation. Yet all of the UN Decade’s ten Guiding Principles, in some way, acknowledge the role of people in halting and reversing degradation, and the cultural and societal benefits of ecosystem restoration.

“Working with local communities and promoting ecosystem restoration through the lens of livelihood is very important,” said Schwab. “We do this for nature, but we also do it for people.” 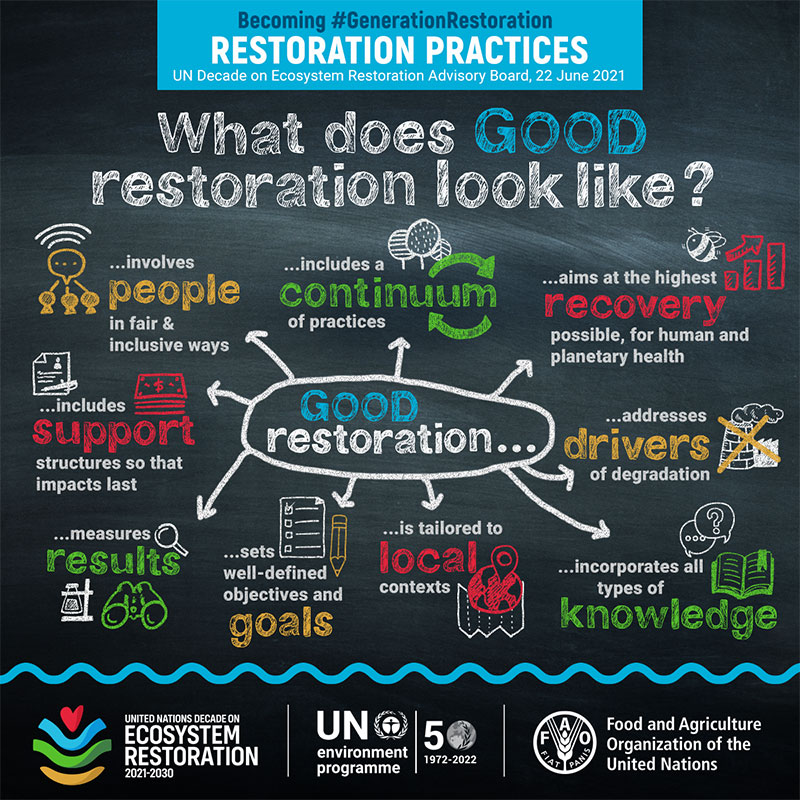 The lofty goals and targets associated with multinational agreements and continental-scale restoration initiatives can at times seem disconnected—not only from each other but also from the efforts of individuals and organizations working at the local level to improve ecosystems for the benefit of people and nature. But the UN Decade on Ecosystem Restoration is helping to bring it all together, linking people with the tools, funding, guidance, support, and motivation to collectively address monumental task lies before us as one global community: #generationrestoration.