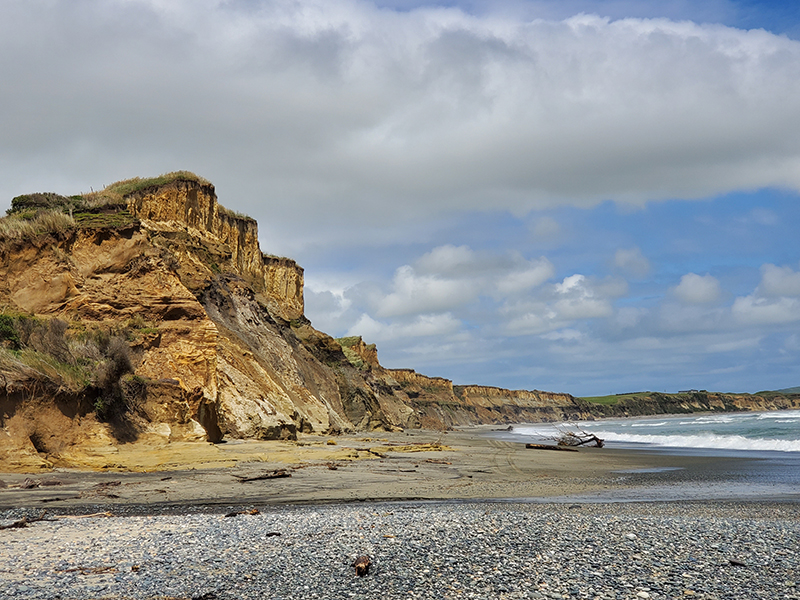 As environmental design and planning consultants, we pride ourselves on creating new ways to weave ecological function into the delicate interface between land and sea and enhance resilience through biological solutions. We are inspired and excited by the opportunity to reintroduce the natural function of wetlands and living shorelines or living breakwaters. We tout the innovation of combining engineered solutions with habitat creation in a variety of urban settings, where we are trying to mitigate the impacts of climate change and support community resilience.

But there is another design challenge lurking in the periphery of our conversations about sea level rise, one which we must also face head on: retreat.

The idea of pulling back from our shorelines, of abandoning whole cities to let nature take its course, is not an easy notion to accept. It is fraught with strong emotional connections to our homeland and rational considerations for our economy. It triggers a dual terror of loss, as it could lead to a disruption to both cultural identity and economic well-being. Relocating whole cities to higher ground or sending populations to other places not prepared for large migrations are also terribly expensive ideas to consider. And, let’s be honest, there’s a large dose of colonial hubris in dominance over the natural world that has long been a staple in western society. Just a few years ago to even speak of retreat was to show weakness, to abandon our American can-do attitude, to give in…

And yet, the evidence is becoming too great to ignore and town planners, environmentalists, and politicians are all finally starting to speak and plan for the inevitable. 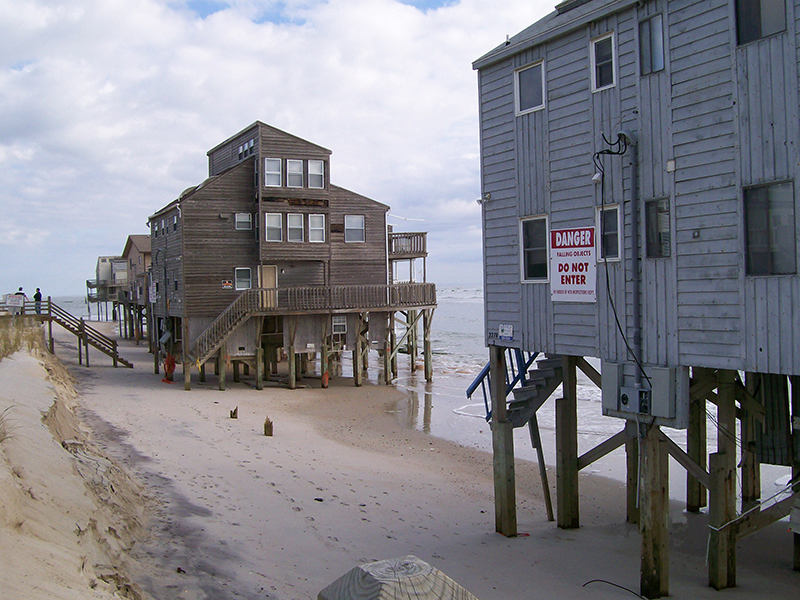 Houses have since been removed at North Topsail Beach, NC. Photo by Norma Longo

One early and vocal proponent of retreat is Dr. Orrin Pilkey, James B. Duke Professor Emeritus of Geology at Duke University’s Nicholas School of the Environment. Now in his mid-80s, Pilkey, who has written or coauthored dozens of books on the impacts of climate change and sea level rise on beach and barrier island systems, has witnessed the slow but steady change in perceptions. Pilkey continues to lecture and write about the issue, after many years of saying what no one wanted to hear. Recently, in a chat from his home in Durham, North Carolina, Pilkey noted with relief that “more and more people are talking about retreat,” and that it “used to be a dirty word, but that time has long gone by.”

There is no question now that “we are going to retreat,” he notes. “The question is timing.” The evidence just keeps increasing and it can no longer be ignored in places that are experiencing its reality with greater frequency—cities like Miami, New Orleans, and New York. In one of his newest books, Retreat from a Rising Sea: Hard Choices in an Age of Climate Change, Pilkey examines the extreme conditions putting these particular cities front and center in the conversation about retreat. 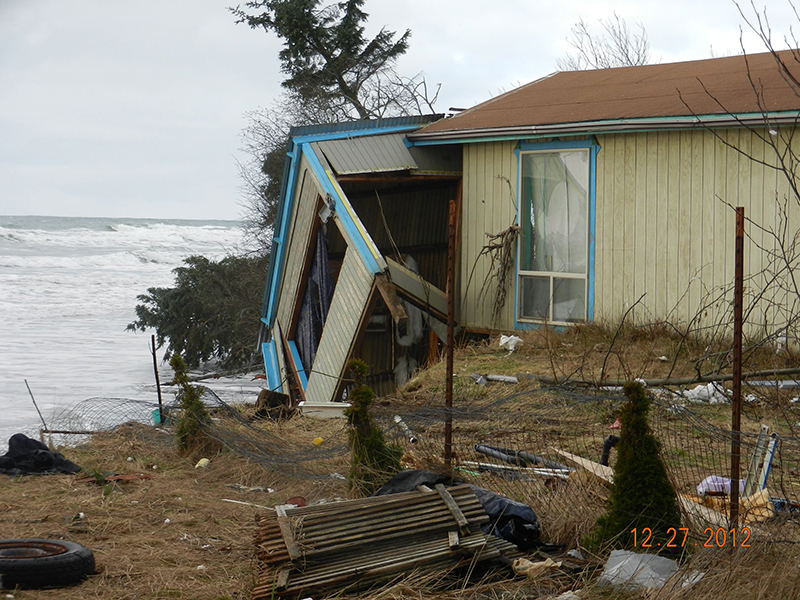 Just within the greater metro areas of Miami and New Orleans, there are upwards of 3 million people at risk. New Orleans is not only facing rising sea levels; the land is already low-lying and they are experiencing subsidence (land is sinking due to oil and groundwater extraction), as well as an aging levee system, and disappearing marshes in the delta. In Miami, another low-lying city, they are also experiencing rising groundwater due to underlying porous rock geology and saltwater intrusion associated with sea level rise. In both cases, these cities are also at risk due to the increasing frequency of hurricanes and large storms which can be accompanied by tidal surges and increased amounts of precipitation.

Pilkey notes that current sea level rise predictions show a rate of 17” per century, but since 2013-2014 scientists have begun to see an uptick in tide gauge data and satellite imagery. He notes that while it is difficult to predict with absolute certainty, “we know that by 2100 we will have at least a 3-6’ rise of sea levels.” He notes, though, that those predictions only project out to 2100 and “the world doesn’t end in 2100.” He adds that locations with large areas of low-lying land–like many in the Gulf and along the southeastern seaboard of the US–will see significant loss of shoreline and land area. And then there are the storms, increasing in number and severity. 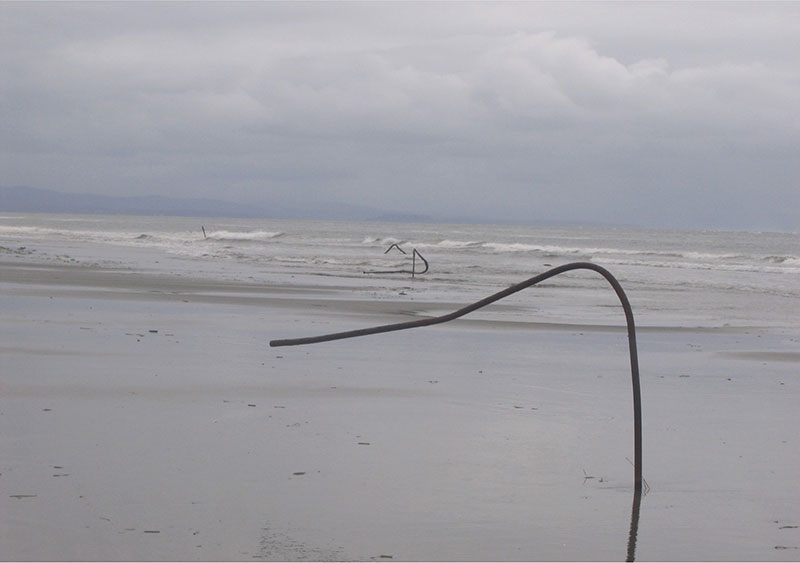 Pipes are all that remain of four homes in Washaway Beach, Washington. Photo by Orrin Pilkey

In fact, according to the Insurance Information Institute the 2020 hurricane season in the Atlantic Basin broke records. “A typical year,” states the Institute’s website, “has 12 named storms, six hurricanes, and three major hurricanes.” This year, we have had 30 named storms (so many that meteorologists ran out of names in our alphabet and began naming them with Greek letters). Thirteen became hurricanes and six were category 3 or higher. Of those, six hurricanes made landfall on the continental US. Pilkey notes in his book that since 1852, there have been 17 category 3 or higher hurricanes that have passed within 100 miles of New Orleans alone and nine of those were category 4 or higher (and his book was published in 2016 so by now that number is even higher).

Retreat has become an accepted outcome (again, it seems to be more of a question of when, not if). So much so that scientists are beginning to study the implications for the receiving communities inland.

Dr. Mathew Hauer, an assistant professor of sociology at University of Florida, has been studying the impacts of climate change on society, specifically the projected impacts of migration. For his doctoral dissertation, Hauer examined potential patterns of migration. Hauer notes from his research that it is generally understood that with a sea level rise (SLR) of 1-2 meters, 180 million people are directly at risk worldwide. In the US that translates to 319 coastal communities and 13.1 million people. Hauer concludes, “If future migration pathways mimic past pathways, SLR is expected to reshape the US population distribution and could stress some landlocked areas unprepared for these migrations while revitalizing others. SLR is currently framed as a coastal hazard but the migratory effects could ripple far inland.” (Source: Hauer, M. Migration induced by sea-level rise could reshape the US population landscape. Nature Clim Change 7, 321–325 (2017). https://doi.org/10.1038/nclimate3271.) 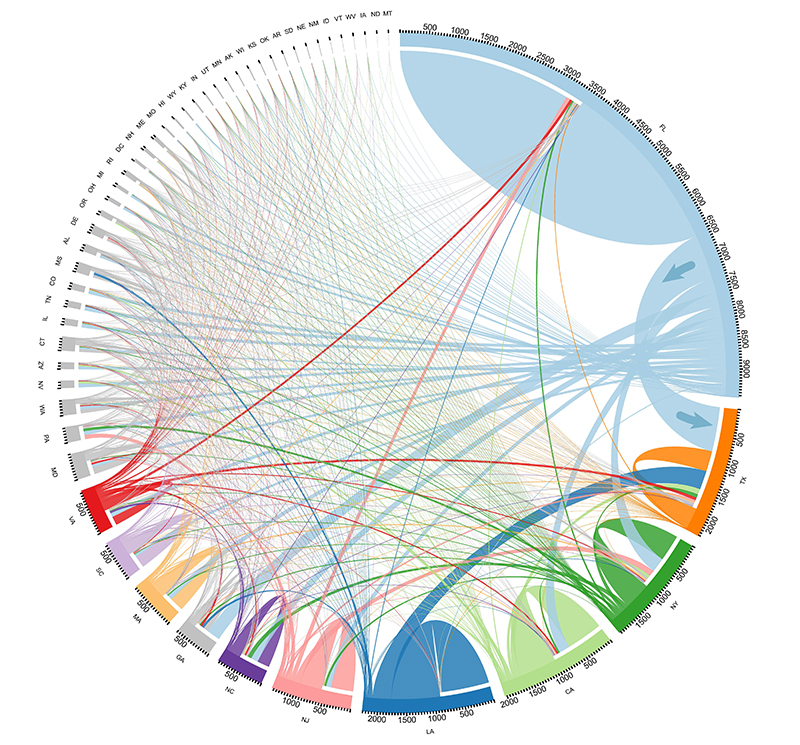 Circular plot of bilateral sea level migration flows from US States with 1.8 m of SLR. Tick marks show number of migrants in thousands (inflows and outflows) and states are ordered clockwise by size of inflows. The top ten outflow states are colored, all other states are in grey. Hauer, M. Migration induced by sea-level rise could reshape the US population landscape. Nature Clim Change 7, 321–325 (2017). https://doi.org/10.1038/nclimate3271

There are communities around the globe who are actively planning for retreat, many of whom have no choice. These communities are often some of the most vulnerable. Not only are they forced to leave their homes but they are often abandoning their ancestral lands, their cultural practices and ways of life (subsistence or otherwise), their climate: their very identity. Many of the communities impacted are the ones least likely to have had a significant role in climate change in the first place. Some of the first climate refugees due to rising sea levels are from small island nations in the Pacific Ocean: the Marshall Islands, Kiribati, and Tuvalu, where atolls have disappeared and communities have had to rely on the goodwill of nations with space willing to take them, like New Zealand (Aotearoa).

In Indonesia the conditions in the capital city of Jakarta have become so dire that the government has decided after years of study to plan a move to a new location on the neighboring island of Borneo. Similar to New Orleans, almost half of the land area in Jakarta is below sea level and it is sinking due to extraction of groundwater. While the government is planning to move the national capital to this new city, they do not expect to relocate the commercial and financial centers, so it seems likely that many of the nearly 10 million residents would remain in Jakarta. And this significant move has its own unknown ecological costs, particularly given what we know of zoonotic disease spread in this part of the world. While planners claim that the new city will be built respecting the surrounding forests, environmentalists are concerned about the significant rainforest near the proposed location of the new capital, which provides important habitat for native orangutans and other wildlife. 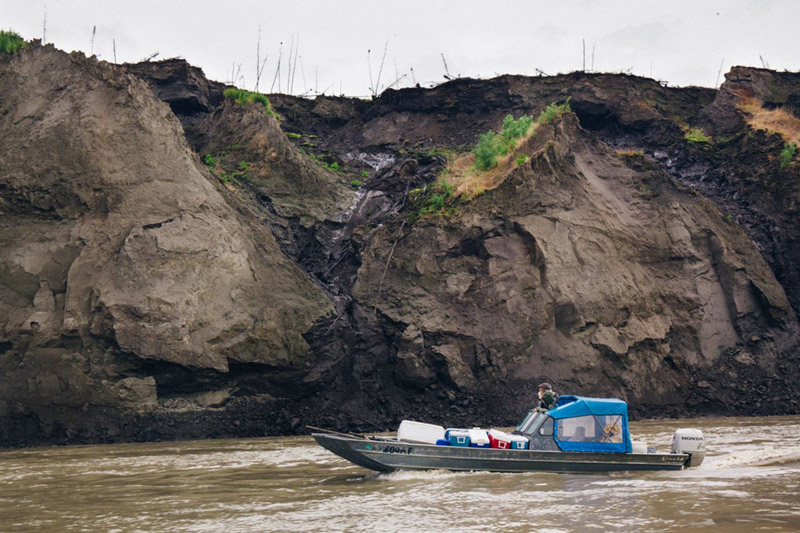 Here in the US, a handful of first nation communities have been our first adopters of retreat. Three tribal communities are making strategic decisions about relocation due to climate change impacts. In Newtok, Alaska (featured in the 2017 “Thawing Permafrost” issue of Leaf Litter) the Yup’ik people are moving 350 residents inland to a new town in response to a combination of sea level rise and melting permafrost that has led to severe erosion. They have lost close to 70 feet a year. The Quinault Indian Nation village of Taholah, located at the confluence of the Quinault River and the Pacific Ocean in Washington state, conducted a vulnerability assessment a few years ago that led to a plan to move their 650 residents to a new location above flood and tsunami zones a half-mile away from their existing village. And the Biloxi-Chitimacha-Choctaw and the United Houma Nation tribes on the Isle de Jean Charles, a narrow island in southeastern Louisiana connected to the mainland by one remaining road, is planning relocation with the help of federal funds from the National Disaster Resilience Competition (NDRC), which sought “creative, forward-looking solutions for rebuilding infrastructure” including “climate-induced migration.” The small community of 100 people has witnessed the loss of 98% of their land since 1955.

But what does this mean for us as ecological designers, environmental engineers, and conservation planners?

So, while we continue to innovate and design living shorelines, restore marsh and wetlands, and other manner of natural systems along coastal communities we can also be thinking strategically about migration inland in a way that considers landscape ecological factors like natural resource preservation and habitat mitigation and community resilience in places less likely to be under water in the future.

Imagine the Wall: An Alternative Vision of Coastal Protection

Fitting (place- and nature-based) Solutions into the Urban Fabric