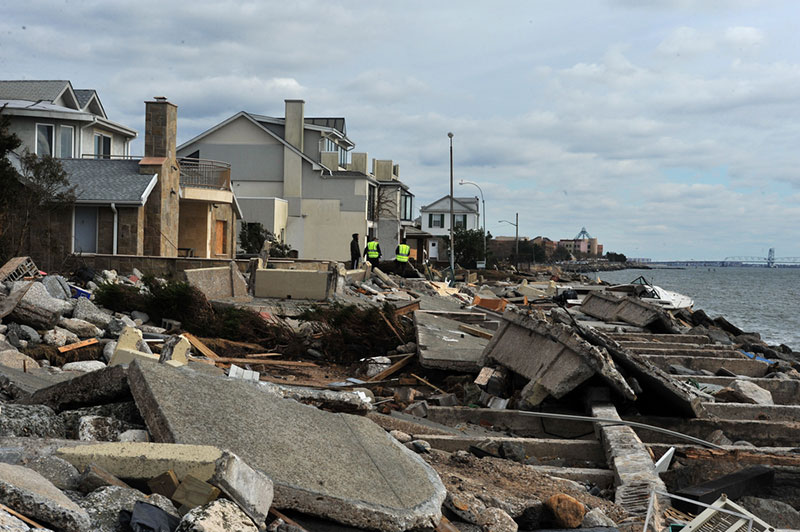 Seven years after Hurricane Katrina prompted officials from Louisiana to travel to the Netherlands to learn about Dutch approaches to flood protection, Hurricane Sandy did the same. Having been appointed by President Obama as chair of the newly established Hurricane Sandy Rebuilding Task Force, then HUD Secretary Shaun Donovan made a similar trip. His guide in the Netherlands was the Dutch Ministry for Infrastructure and the Environment’s acting Director General for Planning and Water, Henk Ovink.

“After disasters, the first thing we like to do is immediately respond,” Said Ovink in a video produced by Rebuild by Design, “but building back what was there is a default perspective.” To shift the conversation toward the future and long-term resilience, Donovan and Ovink conceived of the idea to hold a multi-stage planning and design competition to promote resilience in the regions hit by Sandy. In June of 2013, with support from the Rockefeller Foundation, HUD, and other partners, they did just that. Ovink then joined the Hurricane Sandy Rebuilding Task Force as Senior Advisor.

Named Rebuild by Design, and later referred to as the “Hurricane Sandy Design Competition,” the initiative was executed in three stages, beginning with team selection. Nearly 150 teams from more than 15 countries responded to the competition RFQ, which challenged participants to think beyond traditional, “rebuild what was there before” solutions.

Ten interdisciplinary teams were then selected to move into the second stage of the competition: research and analysis. Among the team members and advisors were designers, scientists (including those in public health and social sciences), engineers, community leaders, academics, and representatives from all levels of government. The research stage was facilitated by New York University’s Institute for Public Knowledge and included site visits so that the design teams could actually see the communities impacted by Hurricane Sandy and better understand their vulnerabilities and opportunities. Teams had the opportunity to meet with city and community leaders, interact with residents, and learn about other pressing challenges. 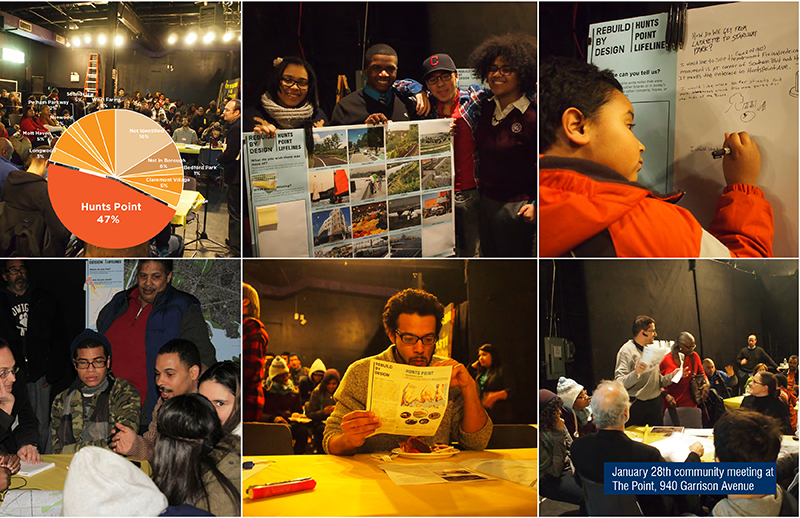 A community meeting for the Hunts Point Lifelines project. ©PennPraxis/OLIN.

In the third stage of the competition, teams collaborated with local and regional stakeholders to develop design proposals for implementable and fundable projects. Teams were assisted in this phase by the Regional Plan Association, the Municipal Art Society of New York and the Van Alen Institute. It included a significant amount of community engagement in the form of charrettes, workshops, meetings, and a variety of creative tactics. One project team, for example, combined a presentation of design concepts with a cooking competition featuring local chefs, caterers, home cooks, and even teams of teenagers from a local high school culinary program. 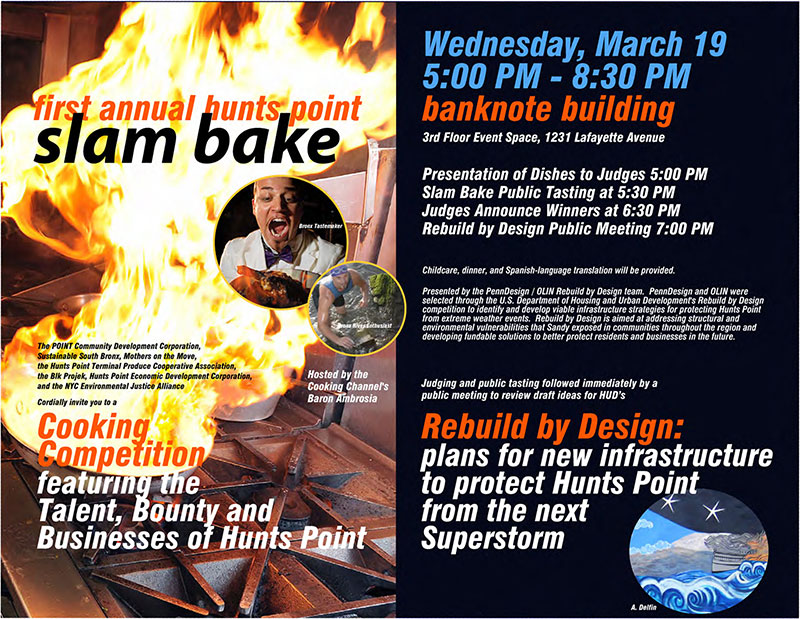 New Meadowlands; developed for the Meadowlands region of New Jersey by MIT CAU + ZUS + URBANISTEN with Deltares; 75B; and Volker Infra Design 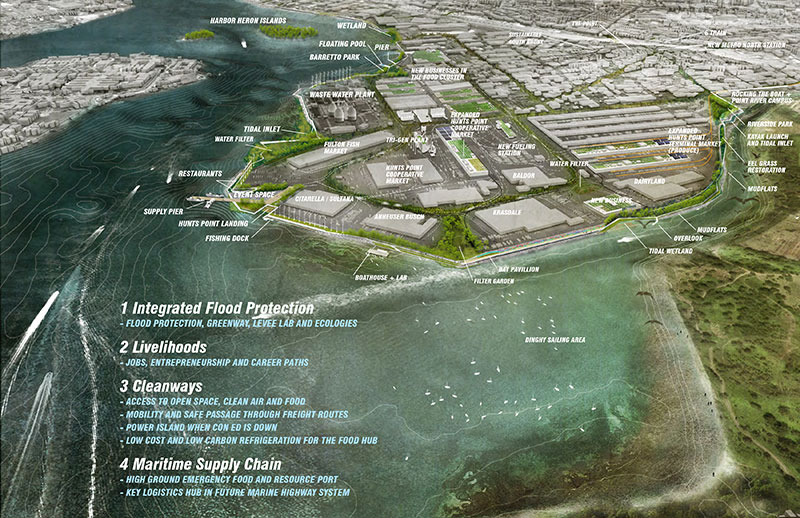 Each of these projects involves some integration of natural and nature-based elements. One of the most striking examples is the Living Breakwaters concept, envisioned as a “necklace” of approximately 2,400 linear feet of offshore breakwaters. The structures will not only protect the southeast shore of Staten Island by attenuating storm waves, but they will also regenerate aquatic habitat in Raritan Bay and create new opportunities for recreation and educational programming. To be constructed primarily of rock, some of the subtidal breakwaters will include “reef streets,” armored with ecological concrete to promote biological activity and foster the recruitment of marine species. 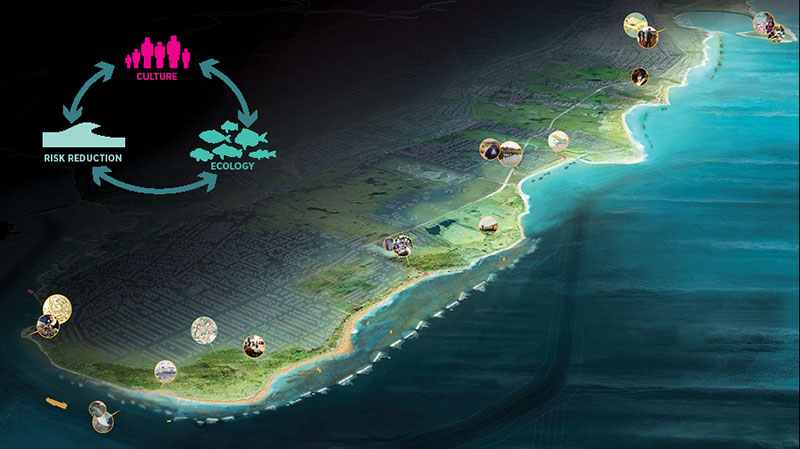 The project will also augment ongoing oyster restoration in the Bay through a variety of techniques, including the placement of oyster spat on the structures themselves. As generations of oysters take hold of the new habitat provided by the Living Breakwaters, the structures will grow and become stronger. Partnering with the Billion Oyster Project, the Living Breakwaters team has already created a STEM program for middle schoolers, and they will continue to develop opportunities for people to engage with and learn about the shoreline and its ecology. 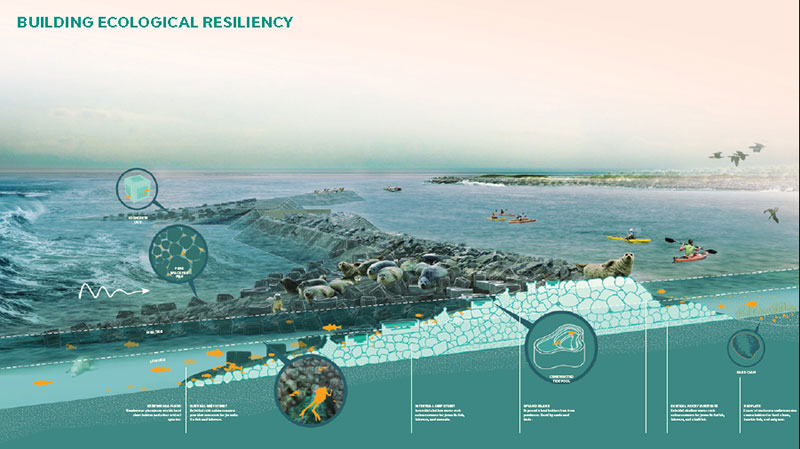 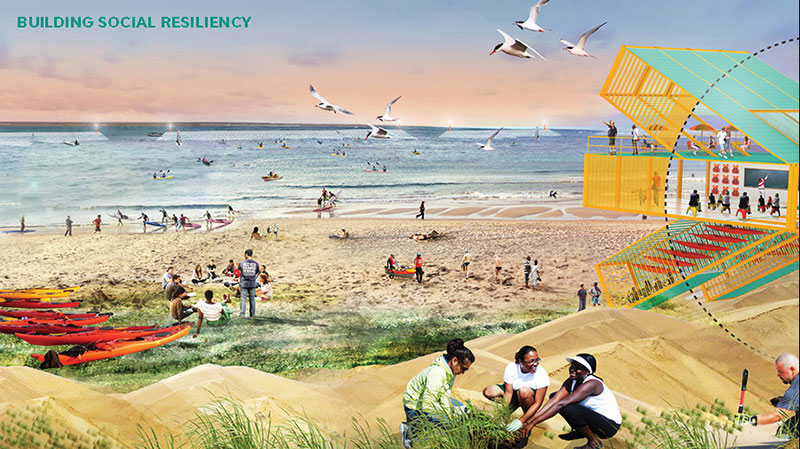 As with the Dutch Dialogues, the visionaries behind the Hurricane Sandy Design Competition did not necessarily set out to create a replicable program, but given the headlines and imaginations captured by the competition, it is not surprising that it has become a model for resilience planning initiatives. Among them was President Obama’s National Disaster Resilience Competition, which awarded nearly $1 billion in funding to 13 cities and states for disaster recovery and long-term community resilience through a two-phase competition process.

The Hurricane Sandy Design Competition’s success also led to the establishment of Rebuild by Design as its own organization. “Even before Hurricane Sandy Design Competition ended,” said Amy Chester, Managing Director of Rebuild by Design, “cities were contacting us, asking us to scope a competition, or similar process, for their city for resilience planning.” 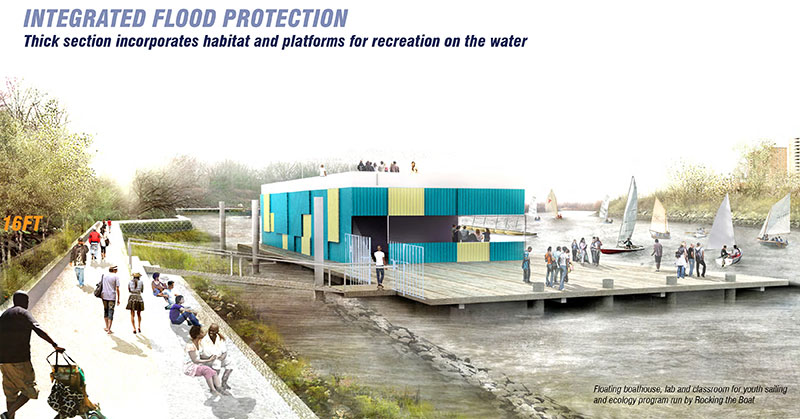 As an organization, Rebuild by Design now helps communities of all scales and geographic locations to create solutions to complex problems. Their assistance can take a number of forms. In the San Francisco Bay Area, it was in the shape of a proactive climate adaptation design competition modeled after the original. Launched in 2017, the Resilient by Design Bay Area Challenge asked, “can the Bay Area come together to shift its course and build a more resilient region before disaster hits?” Its guiding principles include sustaining biodiversity and ecological function, integrating social and ecological systems, and acknowledging place and the First Nations of the Bay Area. Like the Hurricane Sandy Competition, the Resilient by Design Bay Area Challenge began with a Design Brief. In addition to the brief, the launch included a call for Bay Area communities to submit vulnerable sites for consideration.

Ten selected teams then entered the collaborative research phase of the challenge, which included touring, studying, and engaging with communities and ecosystems of the Bay to better understand their challenges and identify several design opportunities. Each team was then matched to one community design opportunity for the collaborative design phase. During this phase, the teams created new visions for nine Bay Area sites while also strengthening community and regional networks. The Resilient by Design Bay Area Challenge also produced useful resources, such as a Finance Guide to help address funding challenges, and a toolkit for community engagement that can be used by others seeking to creatively engage people in resilience planning.

Some communities seek help from Rebuild by Design for issues at a much smaller scale. Such was the case for the Gulf Coast city of Fairhope, Alabama, which needed help engaging community members in productive discussions to generate ideas for a newly acquired City property.  Rebuild by Design’s influence extends well beyond U.S. borders. In Athens, Greece, for example, Rebuild by Design is part of a partnership that is working toward the development of a master plan for the City’s important cultural, ecological, and recreational resource, Lycabettus Hill. 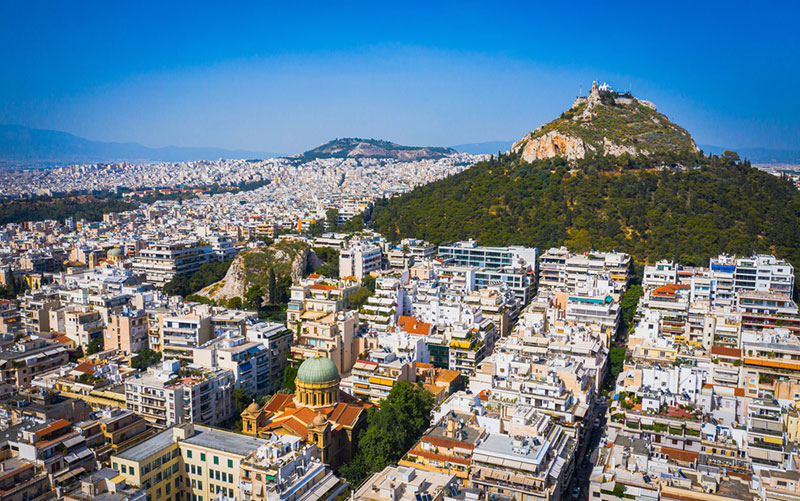 Regardless of the type of program Rebuild by Design implements in a given location, the aim, according to the organization’s website, is “to leave communities with a better understanding, increased capacity, implementable projects, new relationships, and demonstrative examples of how a better process leads to a better outcome.”

Those outcomes can include changes in policy, including one changed that occurred at the program’s outset. Bringing together interdisciplinary teams to reimagine a coastal city was not new when the original Hurricane Sandy Design Competition launched in 2013, but the use of federal disaster recovery dollars for such purposes was. The National Disaster Resilience Competition was evidence that such a change was not a fluke.

Perhaps the most profound example of the program’s influence on policy is New York State’s $3 billion Restore Mother Nature Bond Act. Part of a broader, five-year plan to invest $33 billion to fight climate change, the Mother Nature legislation enables the State government to borrow $3 billion for capital infrastructure. Among the types of projects it would fund are ecosystem protection and restoration, fish hatchery development, green infrastructure to manage stormwater and agricultural runoff, and the acquisition and protection of open space, campgrounds, and nature centers. Rebuild by Design was instrumental in providing research to guide the development of the legislation. This included concept report on how to create a resilient infrastructure fund and study showing that every county in the State had a disaster declaration at least two times in the past 10 years.

The Restore Mother Nature Bond Act was introduced in January and passed in April, just as New York was grappling with the worst of COVID-19. Citing the financial instability brought on by the pandemic, New York Governor Andrew Cuomo removed the bond measure from the ballot but indicated that it will be on the ballot next year. New Yorkers interested in making sure that it happens are encouraged by Chester to contact their elected State officials. Rebuild by Design remains engaged in the effort, and as of this publishing, they are wrapping up a study done in collaboration with AECOM showing the impact of the Restore Mother Nature Bond Act on job creation and the economy.

As the Rebuild by Design organization has grown, its collaborative research and design approach and the wide diversity of disciplines it involves have remained constant. What has evolved, according to Chester, is the level of knowledge regarding climate change. “The past seven years have been transformative for people’s understandings of what the climate impacts will be,” she said. “The expertise has become much deeper in terms of climate solutions and approaches.”   Along with that expanding knowledge, said Chester, has come an increased interest in ecologically grounded solutions. “There is definitely more interest in the ecological, health, and recreation co-benefits of natural solutions…and they are also cheaper to implement.” According to Chester, the demand for natural and nature-based solutions is strong at the community level. “Every community—from Coney Island to the South Bronx —is looking for nature-based designs because those are the solutions their members can help implement,” she said. Chester notes, however, that such solutions are needed at a much bigger scale.

In addition to advancing the Restore Mother Nature Bond Act and helping communities create solutions for resilience, Rebuild by Design is currently focused on ensuring that any stimulus money or infrastructure bill is created in a way that promotes climate forward infrastructure, that creates jobs, increases public health and enhances ecology.

Rebuild by Design has only been in existence for seven years, but the effects of its efforts are rippling fast and far. As the organization and its mission continue to gain momentum, coastal cities are likely to experience a surge of a different sort: one of new ideas, nature-based solutions, participatory planning and design, and of course, greater resilience.

Imagine the Wall: An Alternative Vision of Coastal Protection