Fitting (place- and nature-based) Solutions into the Urban Fabric

Humans are living organisms that respond physiologically and psychologically to nature. In his Biophilia Hypothesis, eminent biologist Edward. O Wilson postulated that the human tendency to seek connection to nature is genetic, an impulse that is innate to our very being. Research seems to support Wilson’s hypothesis, as a growing body of evidence suggests exposure to nature (and patterns found in nature) measurably lowers heart rate and stress, improves health outcomes for recovering patients, and results in improved cognitive development in school aged children. Given this evidence, one might wonder, “If nature is so beneficial to our well-being, why have the largest human habitats—our cities—cut nature from the built environment? And moreover, why do more people choose to live in cities than in the rural countryside today?”  It is all too obvious that the author of this article, being an ecological engineer, has no credibility to answer these questions, and does himself no favors in formulating premises that oppose his perspective. Which is this: as the world grows more populated, we must make cities function like ecosystems. We must set them up to produce and regenerate life support systems within their limits to both increase the resilience of infrastructure from impacts associated with the climate crisis and enrich human spirit and well-being.

If nature is so beneficial to our well-being, why have the largest human habitats—our cities—cut nature from the built environment?

Nature-based design practices offer a means of reintroducing ecological functions to the urban fabric.  Stream restoration and green stormwater infrastructure have been widely adopted by municipalities to improve water quality and open space in cities. But perhaps the most expansive need to implement nature-based design practices are along urban coastal waterways which are experiencing increasingly  frequent fish kills and harmful algal blooms, as well as flooding from heavy rains, storm surges, and king tides.

Nature-based design practices along urban waterfronts will vary from city to city, and within a city’s limits. By definition, all nature-based designs should strive to emulate the ecosystems and consider the context of the place. These considerations may begin to reveal themselves during the discovery phase of a project, when researching the city’s historical landscape ecology and examining the ways in which the landscape transformed with urbanization. As one looks to the past, the functions and processes that characterized the historic ecosystem will come into view. From here, the exercise of articulating the design challenges and project goals becomes clear.

This includes accounting for independent variables that affect the site. For example, prevailing winds, waves, tidal amplitude, water quality, ice, and debris flows are all factors that influence design decisions and the overall approach. And as the serenity prayer instructs, the design team should accept those variables that cannot be changed, have the courage to change the factors that can be changed, and possess the wisdom to know the difference. Additional considerations of the existing built environment, such as land use and its infrastructure, should also be taken into account.

The reality is that we can’t scrape away buildings, close ports, or shut down functioning industries to bring back the ecosystems of the past. Nature-based design practices do not aim to restore the ecosystems that have been displaced, but they should strive to restore some of the ecological functions provided by those ecosystems as a sustainable means of increasing resilience and quality of life.  Moreover, these practices offer opportunities to reconcile the legacies of systemic racist policies and environmental injustices that have been inflicted upon many urban waterfront communities, such as poor air quality, toxic soils, and barriers to natural resources.

Throughout North America, many cities with a 20th century industrial heritage are exploring promising opportunities for their post-industrial future. The City of Baltimore, where our Chesapeake Bioregional office is located, is located at the head of tide on the Patapsco River. Prior to European settlement, the edges of the Patapsco were gently sloped, creating a gradual transition of habitats from the terrestrial upland into the shallow waters of the river.  The extensive marshes that bounded the harbor were filled over the centuries to make developable land and create deeper water for ships to reach port (Figure 1). The expanse of the working waterfront grew with industry and with this growth, the water’s edge was hardened. Many communities were cut off from the water by industries and rail yards and subjected to the toxic, health impacting emissions and output. 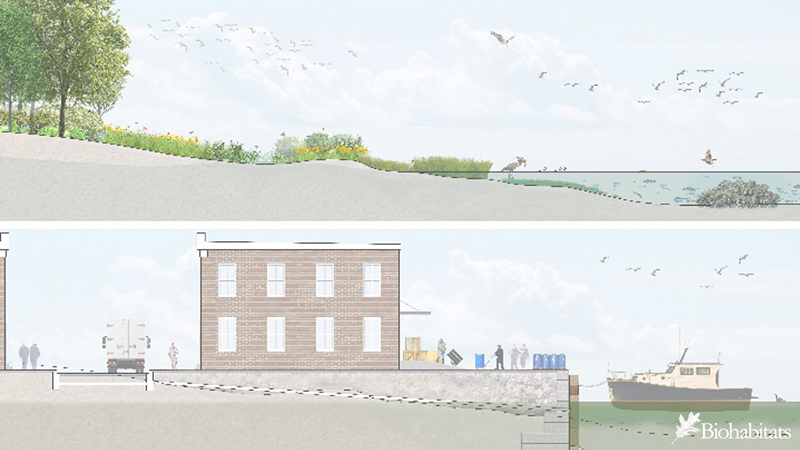 As the industry has faded and left behind barren, capped brownfields along vast stretches of the shoreline, a generational opportunity to reimagine a new urban waterfront not comprised only of gleaming glass buildings is being seized. Along the Middle Branch of the Patapsco, an expansive network of natural open space is being planned that will provide historically disenfranchised black neighborhoods, and all other residents of the City, porous and unfettered accessibility to the tidal waters that lead to the Chesapeake Bay. In addition, the network is being founded on nature based solutions, integrating both terrestrial and tidal ecosystems throughout to increase resiliency from flooding, improve water quality, and expand habitat. While the historic salt marshes of the Middle Branch cannot be restored, the nature-based design aims to emulate the functions they performed.

Training our lens to the shoreline itself, it’s important to consider the overlapping variables a design team can manipulate (Figure 2). Though variables like wind and tide fall outside of our control, the extent and composition of the vegetated buffer, the slope and transition from upland habitats into the water, and the composition of substrate used and structure provided may all be selected, fit into the context to maximize habitat, enhance access, and increase health and resiliency. 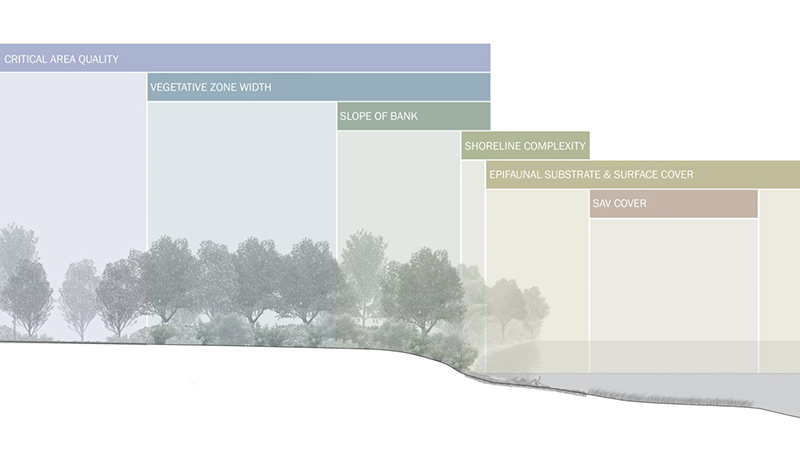 As humanity becomes an increasingly urban species, it is important for the urban environment to be biophilic. Nature-based design seeks to incorporate living systems that provide real ecological functions. Urban waterfronts represent the threshold where nature meets the built environment. It is along these corridors where urban residents can experience open air, wildlife, and vistas that are spiritually renewing. And it is along these urban waterfronts where so much rapid transformation is occurring, as 20th century industry recedes into the past. Urban waterfronts are the front line of our battle against rising seas and storm surges. It is here where we return ecosystem functions that will adapt to these future conditions and teach us how to live with water and restore the aquatic communities on which we depend.