Book Review - Spillover: Animal Infections and the Next Human Pandemic

Following author David Quammen on his five-year quest to understand how and why deadly diseases “spill over” from wild animals into humans is a little bit like reading a series of well-crafted, whodunit mysteries… and a lot like coming face-to-face with prophecy.

By the time Spillover: Animal Infections and the Next Human Pandemic was published in 2012, more than 30 million people had been killed by zoonotic diseases in a 30 year period. In uncovering the forces behind such deaths, the intrepid author follows virologists, medical anthropologists, wildlife veterinarians, immunologists, animal trackers, epidemiologists, disease ecologists, and others as they urgently seek to identify, track, and understand various deadly zoonotic pathogens. Quammen’s pursuit takes him —and readers—all over the world: from a jungle in Gabon to an urban rooftop in Bangladesh; from a horse paddock in suburban Brisbane to a forest fragment in suburban Connecticut; from a pathology lab in Kinshasa to a hotel hallway in Hong Kong. 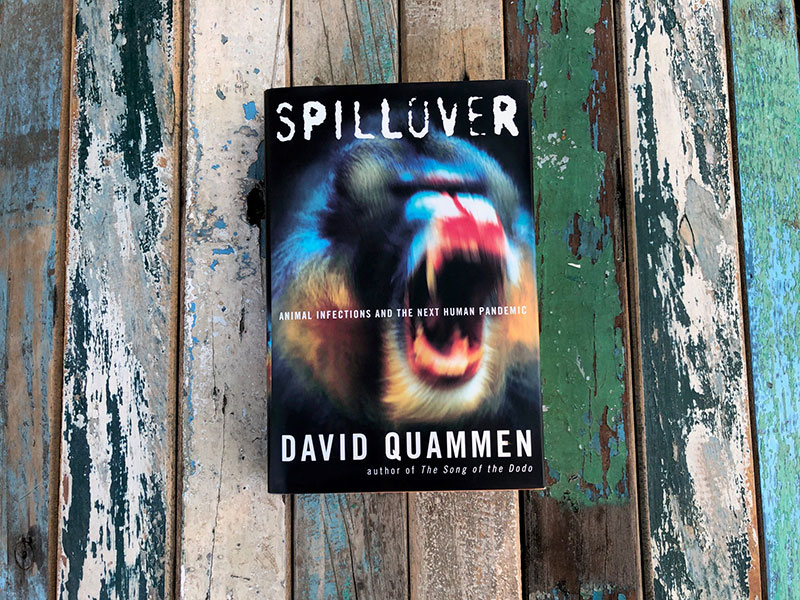 Like any compelling crime drama, these journeys include painstaking detail analyses, perilous adventures, and a rapidly ticking clock. They also include colorful, intensely driven characters who methodically and doggedly pursue leads and identify clues to track down and capture a deadly killer, and understand how and why the killings occurred. There are recurring characters, like Australian veterinary epidemiologist and ecologist, Hume Field, who plays a leading role in identifying the reservoir hosts of Hendra, a virus that had been killing horses and people in Queensland, and Nipah virus, which had been sickening pigs and killing pig farmers in Malaysia. There are supporting characters, like Alain Ondzie, a “lanky and bashful” Congolese veterinarian who regularly risks exposure to Ebola as he traipses all over the Democratic Republic of Congo taking tissue samples from dead chimps and gorillas during the deadly outbreak. There is Raina Plowright, cross-trained in veterinary science, epidemiology, and the ecology of infectious disease, whose research is drawing a connection between deforestation, bat habitat destruction, and the outbreak and spread of Hendra virus. 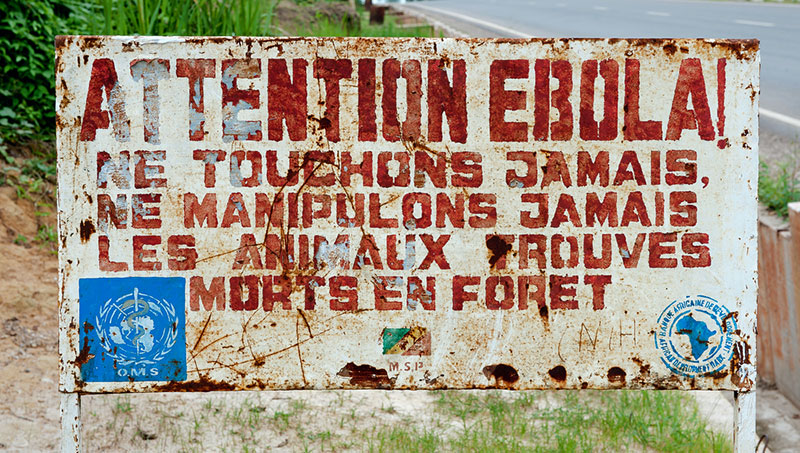 Quammen follows fearless researchers as they crawl, duck, and squeeze into python-infested caves in Uganda attempting to capture bats to test for antibodies in their quest to confirm the reservoir host of Marburg. Readers ascend an urban rooftop in southern Bangladesh, along with Quamman and a team of researchers, to trap and swab bats in order to better understand the ecology of Nipah virus. So vivid are Quammen’s descriptions, readers will feel as though they are right beside him on that rooftop at 4 am. He struggles to see through the darkness as his safety goggles fog. He wonders if his next step will land on the roof or land him over its edge, and we feel the heart-pounding risks taken by zoonotic disease researchers. 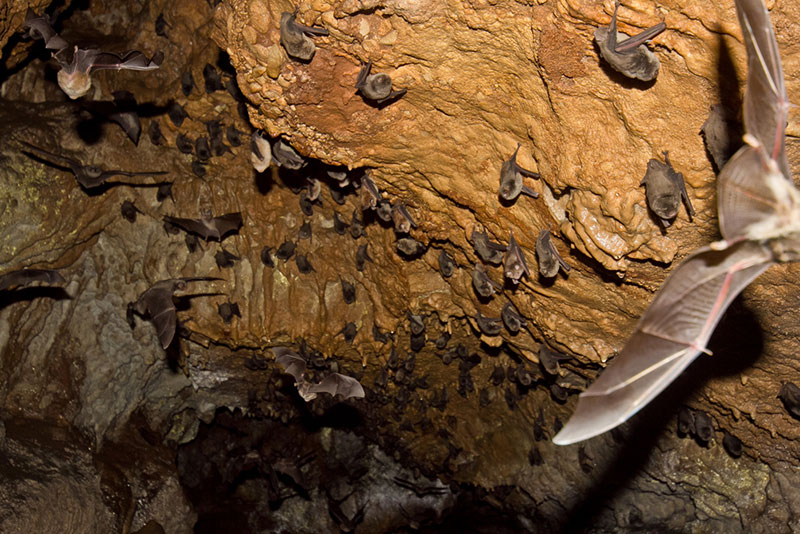 Deftly woven throughout the book are details that inform, rather than overwhelm, the reader about the merging of medical, ecological, and mathematical sciences in the study of zoonotic disease, and of important landmarks in disease theory. We learn, for example, how the Dutch mathematician, Daniel Bernoulli pioneered the practice of mathematical epidemiology when he conducted a cost/benefit analysis of smallpox immunization in 1760. We also learn about the terminology of disease, and the innerworkings of the bacteria and viruses behind some of the most lethal zoonotic diseases. Quammen makes a point to highlight a contribution made by “smart and curmudgeonly,” Nobel Prize-winning Australian virologist, Macfarlane Burnet in his 1940 book Biological Aspects of Infectious Disease (reissued in 1972 a Natural History of Infectious Disease.) The book, written in plain English prose, examined the ecology and evolution of pathogens—“the microbes as beings in their own right”—at a time when most infectious disease experts were focused on preventing and curing the diseases they caused. 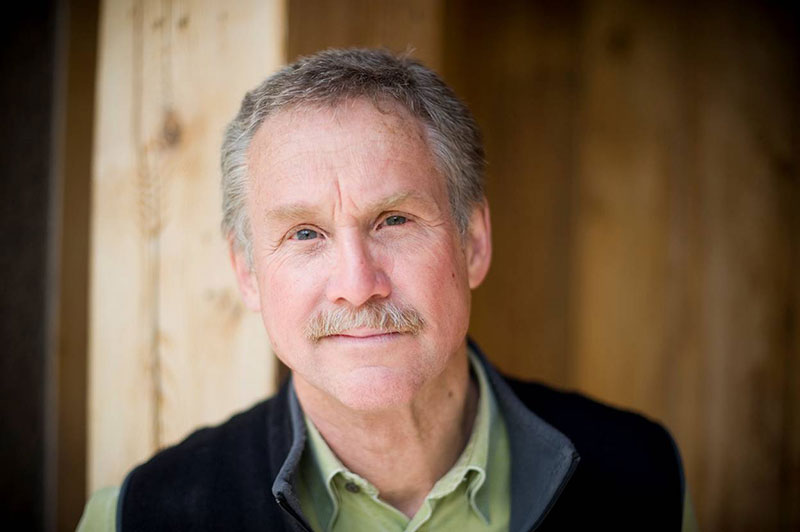 Quammen, too, uses plain English and in so doing, makes even the most technically complex information accessible. He explains, for example, that the shape of a virus particle (virion) is defined by the capsid, the “protein wrap” surrounding it. “A plate of Ebola virions mixed with a Hendra virions,” he writes, “would resemble capellini in a light sauce of capers.” It is when Quammen mentions that some virions are wrapped with an additional layer, called an “envelope,” and that some envelopes are “festooned with a large number of spiky molecular protuberances, like the detonator stubs of an old-fashioned naval mine,” that the hairs on this reviewer’s arm stood upright for the first of several times while reading Spillover. 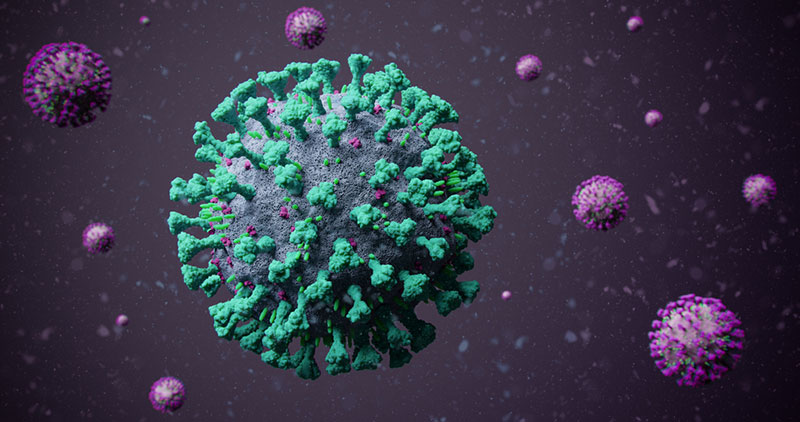 When this book was published in 2012, Quammen’s description of a virion wrapped in a spiky envelope which allows it to lock onto the outer surface of a target cell was likely helpful in enabling readers to visualize it.  In 2020, however, we need no such help. At the writing of this review, such virions of a particular virus known as SARS-CoV-2, have locked onto the cells of humans all over the world, and we have seen its mugshot—the loaded mine responsible for COVID-19, killer of nearly 401,000 people—plastered from news source to news source.

Another powerfully hair-raising portion of the book was Quammen’s chapter on the discovery of the infectious agent behind SARS, a zoonotic disease that travelled to 26 countries in 2003. The urgency and pacing of the writing in this chapter parallels that of the disease’s rapid spread and the race by scientists and medical professionals to understand and stop it. Following the disease from its mysterious outbreak in the industrial Pearl River Delta of the Guangdong province China to its swift and devastating spread—aided by live markets, dense human populations, and air travel—to Hong Kong, Taiwan, Vietnam, Singapore, and Canada, will leave the reader breathless. When reading about the World Health Organization’s global alert about an unidentified “severe, acute, respiratory syndrome,” issued only a month after the initial outbreak, the panic is palpable.

When Quammen then follows the urgent search for the pathogen causing “SARS,” we feel as though we are in the lab with microbiologist Malik Peiris and his team of University of Hong Kong researchers as they systematically rule out avian flu (H5N1) and other known bacteria and viruses and ultimately grow the virus in a monkey cell culture. A quickening of the pulse is inevitable as they capture electron microscope images of the mysterious, elusive pathogen. Those researchers had to search through a book of micrographs to identify the group to which the particles belonged, but anyone reading this book in 2020 could name it instantly by its description: “…round…particles, each…encircled by a corona of knobs.” Coronavirus. The virus became known as SARS-CoV, “the first coronavirus ever found to inflict serious illness upon humans.” Although civets sold in Guangdong food markets were identified as an amplifier host and horseshoe bats (genus Rhinolophus) as the likely reservoir host, researchers are still working to pinpoint the specifics. 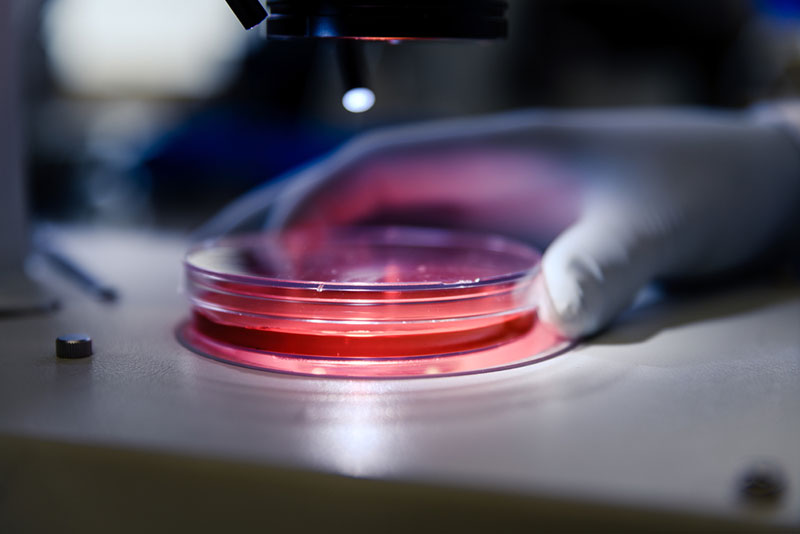 According to Quammen, we were lucky with SARS-CoV. Although it infected thousands of people and killed nearly 800, it could have been much worse. Quammen credits the rapid action of the medical and scientific community, as well as the fact that the disease’s symptoms appear in a person before he/she becomes highly infectious, allowing sick people to be identified, hospitalized, and isolated before they  could do the most damage in terms of transmission to others. With many other deadly zoonotic diseases, Quammen points out, the danger comes before the warning. Such could easily be the case with the “Next Big One,” he warns.

Quammen states that scientists and public health officials speak so commonly of the Next Big One as an inevitability, that it ought to be given the acronym NBO.  “Will the Next Big One come out of a rainforest or a market in southern China? Will the Next Big One kill 30 or 40 million people?” he asks. “The concept by now is so codified, in fact, that we could think of it as the NBO.”

The emergence of Zoonotic diseases, according to Quammen, is no coincidence:

“[They] are not simply happening to us; they represent the unintended results of things we are doing… When the trees fall and the native animals are slaughtered, the native germs fly like dust from a demolished warehouse.”

Whether it be by logging, mineral extraction, urban settlement, agriculture to feed our growing populations, chemical pollution, nutrient runoff, hunting and eating of wild animals, or the many other ways we disrupt natural systems and encroach into wildlife habitat, “we are tearing ecosystems apart.” In the process, as is evident after reading Spillover and experiencing the past six months, we are also creating opportunities for zoonotic diseases to tear us apart.