Next time you are in a city, look up. Increasingly you’ll see a canopy of leaves. Urban forestry is on the upswing. 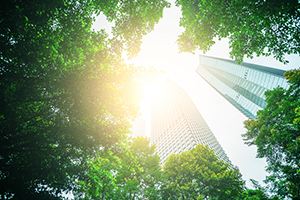 A year ago in Zhuhai, China, the first-ever Asia-Pacific Forestry Meeting was held. The Zuhai Declaration, signed in April, 2016, was both a call to action and an affirmation “that forests and trees in and around cities are the key element to make cities in the Asia-Pacific region greener, healthier and happier and more resilient to climate change.”  The Nature Conservancy reported that “trees are essentially the only cost-effective solution addressing both deteriorating air quality and rising urban temperatures.”

Trees are good for your lungs. According to the Urban Forestry Network, a ten-year-old tree absorbs 48 pounds of CO2 a year, and over the course of its lifetime, that tree may release enough oxygen to support two human beings. Fabulous. The famous line from Joyce Kilmer’s poem Trees is true: “I think that I shall never see/A poem lovely as a tree.” Because without them there would be less delicious, clean, breathable air for us to breathe.

In China, a country many people associate with environmental degradation and smog, the trend in city planning is toward urban forests. Forest cities. No more concrete jungle.

Beijing plans to be a supercity “of 130 million people,” according to The New York Times. The people in this megacity will want shade, peace, pretty views, clean air, noise reduction. In other words: trees. In 2012 Beijing began planning a large-scale urban forest the equivalent of two hundred Central Parks.

The Eastern city of Nanjing, China is experiencing a dramatic rise, so to speak, in forestry and biological architecture. Imagine fern-furred skyscrapers. Magnificent trees planted on balconies in the sky. Landscaping at a thousand feet. Cascading greenery. Engineers and botanists in a loving embrace. Vertical forestry takes the trend in living green walls to the max and is inspiring projects all over the world.

By 2018 Nanjing is slated to have its own version of Bosco Verticale, the towering Vertical Forest apartment complex in Milan, Italy, designed by architect Stephano Boeri. New York Magazine calls the development, “the perfect blend of urban life and nature.”

Bosco Verticale was named the 2015 “Best Tall Building Worldwide” by the Council on Tall Buildings and Urban Habitat.  It is beautiful and wild-looking, planted with 730 specially cultivated trees, 11,000 ground cover plants and 5,000 shrubs. This lushness would cover nearly two acres of space in space-tight Milan if planted horizontally. 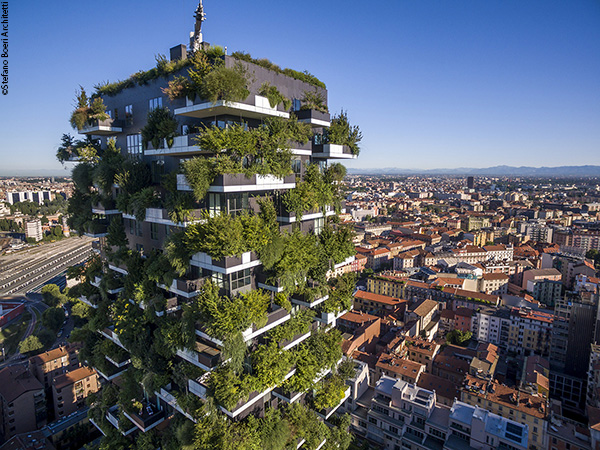 Buildings are being constructed with living materials that give back. Vertical forestry buildings dampen noise pollution, are natural air conditioners, and boost local biodiversity. It’s chlorophyll, for the win. Nanjing’s mixed use green towers are projected to absorb 25 tons of carbon dioxide annually and produce around 132 pounds of oxygen every day. 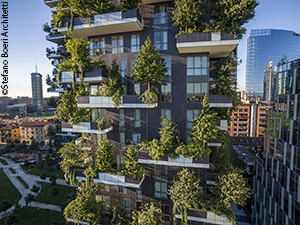 In designing Bosco Verticale, Boeri was inspired by the architecture in Dubai, UAE. In Dubai, urban forestry is audacious and playful and hey mom, look no hands! The city is host to the world’s largest artificial tree inside a man-made tropical rainforest and artificial jungle in a hotel in the Arabian desert. Think about that for a second. “The rainforest is the first in the Middle East,” writes The Huffington Post.  No doubt. We are terraforming.

Vertical urban forestry can be gee whiz science museum exhibit-y, as is the case in Dubai, and it can create healthier living spaces and cleaner air, as in Nanjing. It can also calm us down.

Mexico City’s the Via Verde (Green Way) Project is an initiative to create vertical gardens on freeway support pillars. The project is to make these eyesores beautiful because, unlike a tree, no one as yet has written a poem to a freeway pillar.

These vertical pillar gardens are oases of calming green on the congested commute.  The air plants are a delight for the eyes, featuring epiphytes, mosses, lichen, orchids and ferns. According to Via Verde project director Fernando Ortiz Monasterio, the green way pillars “serve as air filters and regulate heat, reducing temperatures by as much as eight degrees outside and can decrease as much as ten decibels of noise pollution.”

That’s a lot of boom per bromiliad. 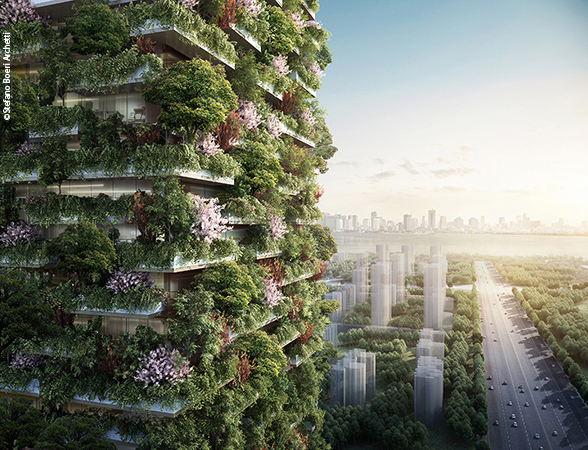 Ortiz Monasterio has said, “We live in a very grey city. Very grey and we forget because we have become used to that being our urban landscape. As soon as we find a park, a green landscape, we realize our mood changes.”  How true this is.

Trees turn our frown upside down. Recent studies have shown that city trees make us happier and healthier. Now, with vertical forestry, we’ll will have even more of a reason to look up when we’re downtown.

Elizabeth Bastos is a nature writer based in Baltimore, MD. Her blog, The Naturehood, explores the urban wilds.