Few people know more about the daily work of managing urban trees than the arborists who work for our city and county governments. When Municipal Arborists Talk Trees, we should all listen up.

Arborists and foresters who work for city and county governments face plenty of challenges while managing trees – drought, disease, maintenance needs, ordinance enforcement, and invasive pests, to name a few. But resolving these issues is only part of the arborist’s job. Municipal employees also find challenges and opportunities in the human dimension, from citizens who are eager to support their work to those willing to skirt regulations, from data-driven decision making to changeable leadership. 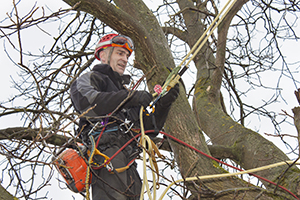 “Good communication and relationships with the green industry, city engineers, and the public is critical to doing our jobs well,” says  Sarah Morris, Vice President of the Society of Municipal Arborists. This article highlights a few of the day-to-day issues for professional arborists and how they communicate the value of trees across sectors.

The cornerstone of many urban forestry plans is a tree canopy metric, usually expressed as % tree canopy cover. Cities use planning processes or tools such as the USDA Forest Service Urban Tree Canopy Assessment to set goals such as 50% tree cover by 2051 (Charlotte, NC), 30% within 30 years (Seattle, Washington), or 40% in however long it takes to get there (Grand Rapids, MI). Usually the stated goals also include something about the distribution of trees: trying to reach a certain amount of canopy cover in each neighborhood. City arborists can work with schools or libraries or other departments on public land, but meeting these goals almost always involves encouraging residents to plant more trees on private land

However, not all neighborhoods feel the same about trees, and overcoming resistance to planting can be an important part of the urban forester’s job. In Charlotte, NC, which will soon roll out an urban forestry master plan, the city and their partner NGOs have ample experience with the differences between neighborhoods. 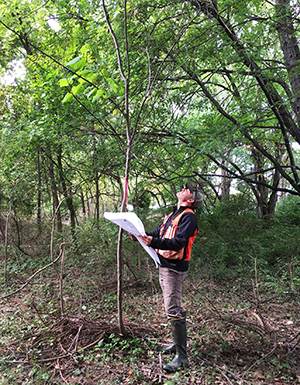 “Most neighborhoods receiving trees register in advance, leaving very few leftovers. Other neighborhoods that register have lower turnout, leaving more trees unclaimed,” says Chuck Cole of TreesCharlotte, an NGO partner to the city arborist in Charlotte. The problem is common. People might resist planting trees because of watering and maintenance costs, concerns about dropped limbs, or a preference for open sightlines. Cities trying to expand their tree canopy often rely on their arborists to educate the public on the benefits of trees.

Talking to Developers and Decision-makers

Overall, many arborists feel as though the public’s understanding of the value of trees is growing alongside our cities’ populations. Unfortunately, tree canopy cover in US cities is declining even though tree ordinances have generally become more complex and protective as a wider group of stakeholders recognizes the values of urban forest. Developers are exhibiting more concern today than they did in the past.

“We’ve definitely seen some changes in recent years,” says Claude Burns, Horticultural Superintendent with the City of North Charleston, SC. “Developers are more conscious of protecting the trees on their site and planning for forest cover.”

That trend makes it somewhat easier for arborists to communicate with developers through the permitting process, though ultimately, site-specific decisions come down to the strength of the municipal tree ordinance and how often those ordinances are bypassed by variances granted by local planning commissions. Granting variances to established ordinances is a highly political process, and though municipal arborists are usually one step removed from those politics, their communication skills and ability to explain the value of the ordinance, the cumulative effect of variances, and work with developers to safeguard urban canopy is a vital part of their effectiveness.

Arborists can also benefit from strong relationships and open lines of communication with the green industry. “Greenhouses and growers are critical partners in our work,” says Morris. 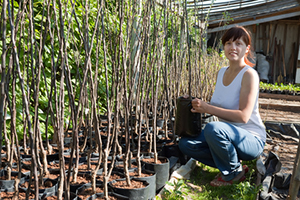 She cites the current tree shortage in the southeast as a good example of when that communication comes into play. “Because of recent flooding, and because the industry is still recovering from the downturn in 2008 that put several growers out of business altogether, sourcing plant material this year is a challenge.”

By working closely with growers and growers associations, arborists in the region are able to modify their designs to accommodate the supply. These relationships also produce long-term results. Regional growers understand the climate and local conditions that inform appropriate specifications, and working over years or decades with the same growers can shape designs and broaden planting palettes. “New varieties come online every year,” says Morris. “For arborists, keeping informed of that progress through continuing education credits and communication with other professionals is how we keep up and change with the times.”

Tree ordinances and political leadership vary hugely between cities, as do the administrative positions of city arborists. Urban foresters are found variously in departments such as Planning & Zoning, Public Works, or Parks & Recreation. Foresters find benefits and challenges in each. Working with Planning and Zoning can allow foresters an early seat at the table in permitting and site design. Working with developers and landowners from a project’s earliest stages can facilitate many of the technical challenges that arise later in the process–protecting trees, choosing appropriate mitigation strategies, or phasing construction plans to protect and support vegetation. On the other hand, the funding and easy access to equipment and crews afforded by working closely with Public Works can be a boon, though there has to be a fundamental understanding of the importance of trees as infrastructure alongside roads and sidewalks. Public Works can also be a good place to explore multiple benefits of trees, such as their function in managing stormwater (see below). Finally, Parks Departments often value trees highly as natural resources that provide habitat, but they are notoriously poorly funded compared to other municipal departments. Whatever the administrative structure of their department, effective arborists rely on collaborations with other departments whose staff share an understanding of the multiple values of urban trees.

For more information on these and other issues, check out the Society for Municipal Arborists’ City Trees Roundtables, which informed this article.

One argument for placing foresters in Departments of Public Works is the role trees can play in stormwater management. Urban forests reduce the stormwater runoff that reaches surface waters by intercepting rain, evapotranspiring, and by promoting infiltration and storage of water where they grow.

How much tree canopy affects stormwater is a topic of interest to many cities. The Green Infrastructure Center, for example, is working with municipalities such as Charleston, SC, to look at how urban tree canopy functions for stormwater mitigation, especially Municipal Separate Storm Sewer Systems (MS4) permit compliance. The Center recently completed a detailed map of Charleston’s tree canopy that will be used to estimate current benefits provided by the city’s trees, as well as create scenarios for expanding the city’s tree canopy to maximize stormwater and other benefits. The project is simultaneously performing a code and ordinance review to address two primary questions: Do city policies add excessive impervious area, and can the city manage and expand the urban forest? 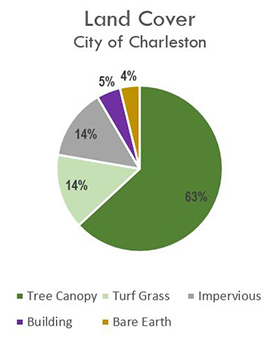 These benefits are widely understood, but quantifying them with the precision demanded by stormwater regulations is a challenge. The Chesapeake Bay Program recently released new Recommendations of the Expert Panel to Define BMP Effectiveness for Urban Tree Canopy Expansion, a guide to calculating the stormwater benefits of tree canopy cover. Its recommendations clarify the definition of urban tree canopy, document the crediting protocol, and create a way to report and track all trees planted. Urban tree canopy expansion is credited as a land use conversion. For example, converting land use from turfgrass to tree canopy offers a ~24% reduction in total nitrogen.