Urban Forests: A Natural History of Trees and People in the American Cityscape
Review by Rachel Whiteheart, Water Resources Engineer

“We in the animal kingdom give far too little thought to other forms of life.  We should be more considerate. We want them to think well of us when we are gone. Trees are for the most part largely benevolent. The worst they can do is fall on you, and then it’s usually not on purpose.” – Henry J. Stern 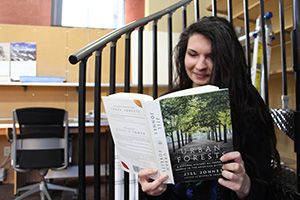 Henry J. Stern, a 1980s-era New York City parks commissioner and self-proclaimed “custodian of plant life in the city” is just one of the vibrant voices that make up Jill Jonnes’ Urban Forests: A Natural History of Trees and People in the American Cityscape. Starting in the early 1800’s and continuing into the present day, Jonnes profiles characters like these and the organizations that they forged, many of which have been lost to history or overlooked.  With this in-depth storytelling, Jonnes creates a narrative of urban forestry that weaves together social, political, and environmental forces across the United States.

Throughout Urban Forests, Jonnes investigates the ways in which America’s relationship with trees has, in many ways, been a byproduct of America’s change as a nation.  Globalization starting as early as the 18th century brought with it an influx of foreigners and an influx of foreign trees, the beloved gingko and the common street tree Ailanthus among the first colonizers.  As globalized trade expanded, so did the introduction of foreign tree diseases and pests, brought to America via shipping pallets and on foreign trees being imported for lumber processing or for horticulture.  Jonnes spends several chapters exploring the means of introduction of these devastating diseases and invasive pests–chief offenders being Dutch elm disease, Asian longhorned beetle, and emerald ash borer—and the severe impacts they’ve had on our urban forested landscapes.  These pest-focused chapters are rife with interviews and portraitures, some of scientists striving to genetically engineer disease-resistant trees, and others of heartbroken homeowners, watching their beloved, infected trees being removed.

As foreign diseases and pests felled hundreds of thousands of trees, leaving many city blocks bare, city-dwellers were confronted with the harsh realities of a city without trees.  What started as a simple observation that a city block without trees was hotter, grittier, and noisier than one shaded and protected by arboreal guards soon snowballed into scientific quantification of the services provided by trees.

Starting in the 1980’s, scientists began working on models to quantify exactly how much trees do for cities in terms of air purification, water treatment, heat reduction, and a slew of non-environmental fields.  This work became increasingly crucial as the newly-created Environmental Protection Agency began to push cities to address their mounting pollution problems.  Jonnes dissects the development of these methods and many of the remarkable discoveries made along the way.  Some arose from the modeling work, like the discovery that the average NYC street tree intercepts 1.432 gallons of stormwater and removes 1.73 pounds of air pollutants annually.  Other discoveries emerged from unrelated fields, ranging from health care to consumer behavior – shopping destinations with trees have more customers than those that don’t.

Urban Forests is a thorough history of America’s relationship with trees, but the ways in which Jonnes fleshes out important characters throughout this history are what makes this book stand out.  Profiles of personalities like Janet Noyes, a cherry tree advocate who enlisted the help of U.S. congressmen’s wives in order to lobby Congress,  demonstrate the unorthodox methods tree proponents often had to employ. In sharing stories such as that of Andy Lipkis, who organized his first tree-planting campaign at age 14 and went on to start the massive west coast tree-planting organization TreePeople, Jonnes reveals the passion behind the rise of non-profit tree planting organizations across the U.S., and the power they have to enact change. 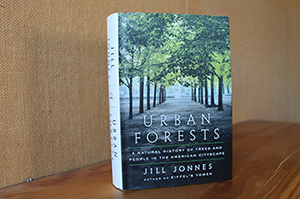 Jonnes, founder of the non-profit Baltimore TreeTrust, brings a clear passion and excitement about trees to every page.  Although this book is not for the lighthearted, clocking in at 350 pages and completely saturated with tree details and stories, it is a good read for anyone eager to learn more about the living monuments around them.