Gray Area for the Gray Wolf

In two regions of the U.S., gray wolf protection has been handed over to states, with rather drastic results for conservation.

The gray wolf is a keystone predator whose existence helps maintain the health and function of many ecosystems. Once the world’s most widely distributed mammal, the gray wolf has seen its worldwide range decrease by nearly one third thanks largely to extermination by humans.

Since 1974, when the gray wolf was listed as Endangered in the Lower 48 States and Mexico, it has benefitted from the protection of the Endangered Species Act (ESA). News of the species’ reintroduction to Yellowstone National Park and the resultant beginnings of ecosystem recovery inspires hope for the gray wolf. But ESA protection for the oft-maligned and feared creature is being eroded. In Idaho, Montana, Wyoming, Minnesota, Michigan, and Wisconsin, where pressure from ranchers concerned for their livestock is strong, as is pressure from sporthunters who don’t want to share elk hunting opportunities with wolves, ESA protections have been lifted for the gray wolf, and management has been handed over to the states. Federal protections have also been lifted in portions of states neighboring those six states, leaving partial management of gray wolves in the eastern thirds of Oregon and Washington, for example, under state control. 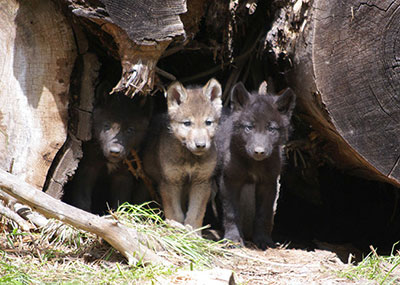 Just how seriously does this shift in protection and management impact wolf populations? Quite severely, according to Amaroq Weiss, West Coast Wolf Organizer for the Center for Biological Diversity. “During the first two years post-delisting, the wolf population declined by 4% in Montana, 11% in Idaho, 16% in Wyoming – with an overall regional decline of 7%. In the western Great Lakes region, it was even more dramatic. The wolf population declined more than 25% in Minnesota after delisting.  When the end-of-year-2013 figures come out from these states, now that a third year of aggressive state hunting and trapping has taken place, it’s widely anticipated that reported wolf population numbers will have plunged further.”

The state of Idaho is currently attempting to pass a bill that would use $2 million to create a state wolf control board. According to Weiss, this would lead to the killing of 500 wolves, bringing the total state wolf population down to only 150, the bare minimum the state is allowed to have before the federal government would step back in. The bill has passed the House and is currently before the state Senate.

“Idaho spends only $6,000 per year on each school child in the state, yet the state would spend $4,000 per wolf to kill 500 wolves, under this bill,” said Weiss. “It’s incomprehensible, an outrageous misuse of public taxpayer dollars and an unconscionable way to manage wildlife.”

What happens when the recovery of a species seems at odds with the  economy and culture of a sector of society—a sector that may view short-term needs, like a paycheck, over long-term necessities, like the ecological health and function necessary for human survival? Will a solution arise that can address both? Time will tell, but in the meantime, lifted protections clearly mean declining populations for the gray wolf.