Mediterranean Sea: Biodiversity Hotspot, but Maybe Not for Long

A discussion about the dusky grouper (Epinephus marginatus) and other species struggling to survive in the Mediterranean Sea.

Although it is a world famous tourist destination and a strong factor in the development of the region around it, the Mediterranean Sea is also often defined by ecologists as a hotspot of biodiversity. Separated from the Atlantic Ocean by only the 14-kilometer Strait of Gibraltar, the Mediterranean hosts the world’s second highest percentage of endemic species. But many of these species are in trouble, and they are attracting the concern of scientists worldwide.

Among such troubled endemic species is Neptune grass (Posidonia oceanica), which creates habitat for many organisms and thus plays a significant role in marine Mediterranean ecosystems. From the surface to the depth of 40 meters, we can observe its large underwater meadows in the zone of sheltered coastal waters. Today, it is categorized by the IUCN Red List of Threatened SpeciesTM as being of “Least Concern,” but it could be reclassified to “Near Threatened” in near future thanks to coastal development, trawling, boat anchoring, and other threats.

The dusky grouper (Epinephelus marginatus) is a fascinating fish. A hermaphrodite, it is born female, but becomes male after 10-15 years. Weighing as much as 65 kg, the dusky grouper is famous for approaching divers without fear. Its friendliness almost got it extinct, however, because of over spear-fishing. Despite a decade-old ban on spearfishing, the dusky grouper is still under pressure from commercial fishing. Since 2004, it has been categorized as “Endangered”

Sadly, the list of Mediterranean threatened species is too long to be listed in this short article.  According to IUCN, out of the 519 native Mediterranean marine fish species, more than 8% (43 species) are classified in threatened categories (Critically Endangered, Endangered or Vulnerable). What are the main reasons which led those species into such a bad condition? What could possibly affect the decreasing of biodiversity on the Mediterranean Sea? 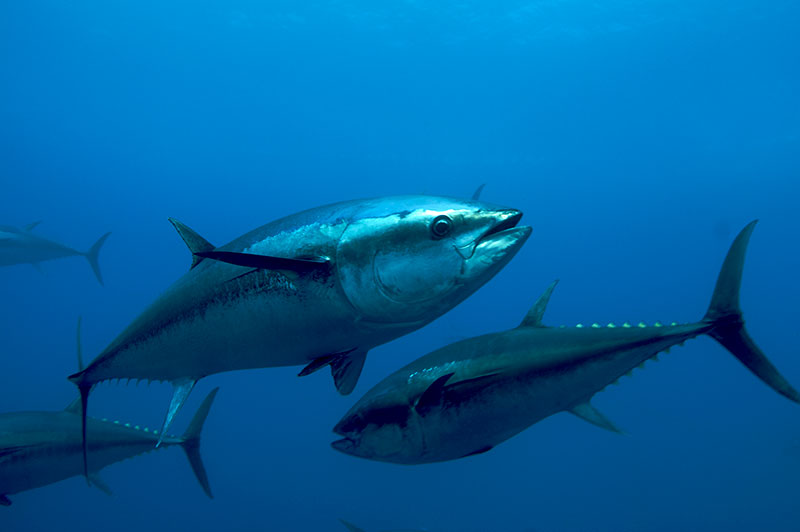 Why are so many species in peril in the Mediterranean Sea?

The combination of both human and natural impacts explains the loss of biodiversity in the Mediterranean Sea. IUCN ranks the most important causes of threats as follow: habitats loss and destruction, pollution, over-exploitation (unsustainable harvesting, hunting and fishing), natural disasters, invasive species, human disturbance and bycatch.

The beautiful landscape and nice weather make the coast a favorite tourism destination for millions of people. Pollution and habitat destruction are the result of this attraction. The Mediterranean climate is also favorable for harvesting a tasty grape transformed into delicious wine, a process requiring a huge quantity of pesticides and treatments which pollute the water. In all the countries bordering the Mediterranean coast, anthropization is prevalent and directly impacts ecosystems.

And as if that were not enough, over-exploitation by the fishing industry makes species such as bluefin tuna (Thunnus thynnus) and herring hake (Merluccius merluccius) considered “Endangered” or “Vulnerable” with extinction at the regional level.

Climate change and invasive species are also threats, as they may depredate native species, compete with them for resources, or spread new diseases. For instance, the alga (caulerpa taxifolia), used as a decorative plant in aquaria, has accidently spread along the Mediterranean coast and dramatically altered and displaced native plant and animal communities. Remember Neptune grass (Posidonia oceanica)? It is directly threatened by this alga.

To address the decrease of biodiversity and avoid the extinction of species, marine stakeholders are implementing several solutions.

In 1992, under the Habitat Directive, the European Union implemented Natura 2000.  The aim of the network is to assure the long-term survival of Europe’s most valuable and threatened species and habitats. In the marine environment, Natura 2000 areas are protected by conservation measures to ensure they are not over-fished or affected by pollutants from sewage or shipping traffic.

However, because of the complexity of biodiversity, it is sometimes impossible to determine whether or not particular specie is endangered. In this context, scientists are working to collect data to be able to clarify the degree of threat and determine if a species is endangered or not. For instance, the Sublimo life + program, funded by the European Union, and implemented by scientists of the University of Perpignan in France, aims to analyze, to monitor and in fine to reduce this loss of marine biodiversity.

We can already observe some progress as a result of conservation initiatives implemented in the Mediterranean Sea.

Established in December 1963, the National Park of Port-Cros, which occupies 1,288 ha of marine areas, is one of the oldest National Parks in France and the first European marine park. Today, scientists affirm that the Park is used by the dusky grouper as a reproductive site. According to Nicolas Gérardin, adviser at the National Park of Port-Cros, the establishment of marine protected areas, combined with the spear fishing ban, have helped the dusky grouper increase from few dozen individuals in the 1970s to over 500 today.

In 2012, the French Ministry of Ecology funded the NAPPEX project. It consists of the deployment of an innovative fish habitat: the Biohut. These cages, installed in harbor along the coast, provide shelter and food for young fish seeking nursery. Scientists who perform the assessment have observed juvenile groupers in the Biohut, along with as seahorses (Hippocampus guttulatus) categorized as “Data Deficient” but considered by many scientists as an endangered species.

The total recovery of fish populations in the Mediterranean is a long-term process that will take decades. Effort must be maintained and global commitment from all stakeholders (fisherman, coastal managers, governments, etc.) must be strong in order to repair past mistakes and preserve this biodiversity hotspot. The efforts needed to conserve the world’s species are a small price compared to goods and services provided by biodiversity.