What You Can Do: Volunteer on a Turtle Patrol

Find out what it is like to spend your early morning hours on “turtle patrol” and learn how important these types of volunteer efforts are to sea turtle conservation.

Turtle volunteers don’t hit “doze” when their alarms sound during sea turtle nesting season. They roll out on dawn foot patrols to search the beaches of the southeast for tracks that indicate a female seaturtle has come ashore overnight and deposited eggs. 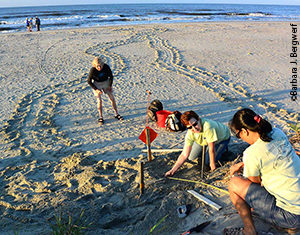 Christel Cothran is a volunteer with Isle of Palms Nest Protection Project, one of 1300 volunteers throughout South Carolina who collaborate with state wildlife managers to detect nesting turtles on 187 miles of beaches.

Once a week, Christel and her turtle patrol partner meet at 6 am to walk the 2 mile stretch of beach on which they are responsible for finding and protecting turtle nests.

Most females crawl up into the dunes behind the high tide mark to lay their eggs, so the volunteers walk the beach each morning just above the high tide line to make sure they can spot nests even if the turtle’s tracks have been washed away by the surf. 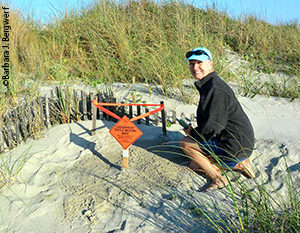 The most common species nesting here, loggerhead turtles, can weigh up to 350 pounds, and their tracks are obvious wherever the water has not scrubbed them away. If the mother turtle is not turned back by seawalls or wrack or lights or noise, leaving behind a set of tracks but no eggs in what is known as a “false crawl,” the volunteers have to find the nest. It’s not always easy. If the tracks have been marred or erased by wind or water, Christel has to spot the nest based on whether the sand has been disturbed in the pattern typical of a nesting turtle. Every time the volunteers see tracks, they call their team leader, who has years of experience “reading” the tracks and knowing where to look for the egg chamber. 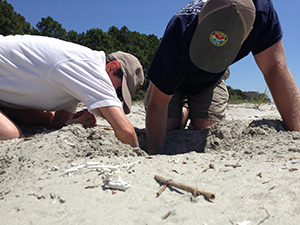 DNR staff digs an egg chamber and discoveres a nest destroyed by raccoons.

If a nest is found, the team leader will be the one to decide whether the eggs will be safe there for the 55 days until they hatch or whether they need to be relocated to a spot that is landward of the high tide line. Either way, the exact location of the nest is marked and recorded, and on many beaches, the volunteers also cover it with a protective mesh to keep out predators such as dogs or raccoons.

The last time Christel found tracks, it was unexpectedly early in the season, which lasts from the first of May through the end of October. She followed the trail of a female who wandered in from the sea and looked for a suitable site, ultimately settling into lay eggs in a sand trap of the coastal golf course.

Each of the 30 Nest Protection Projects along the South Carolina coast has an experienced team leader who works closely with the Turtle Program run by the South Carolina Department of Natural Resources (DNR). Some have been in their positions long enough to learn more than would be included in any graduate curriculum. 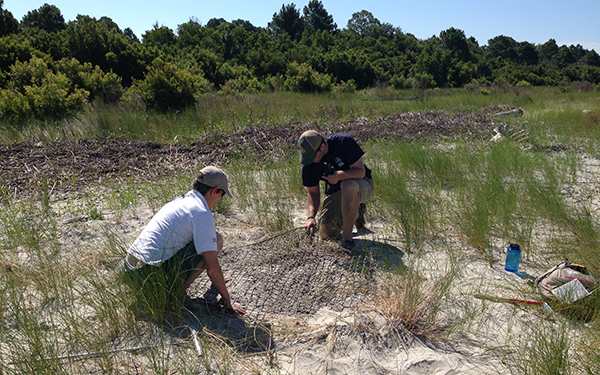 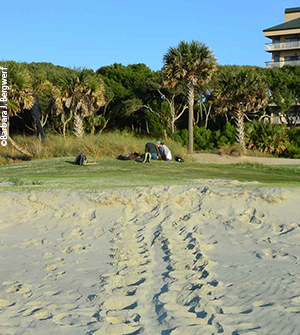 Betsy Brabson, who leads the Debordieu and Hobcaw Beach Nest Protection Projects, started volunteering when she moved to South Carolina in 1991. Her inspiration was local: shortly after their move, she saw a crowd on the beach and went over to watch a biologist help two little hatchlings emerge safely and make it to the water. He was doing an “inventory,” follow up on the nest about three days after hatching, to collect data on the success of each nest and lend a hand to any hatchlings who might have had trouble working their way out of the nest.

By the next season, she was patrolling her own 2 mile stretch of beach 5 days a week. Now, as a Nest Protection Project team leader, she holds the permit for handling threatened species and supervises inventories like the one that inspired her to volunteer 25 years ago. 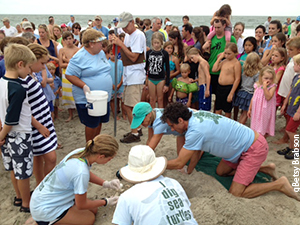 “It was different back then,” says Charlotte Hope, the South Carolina DNR protected species biologist who assists with the Marine Turtle Conservation Program and runs the state’s Bald Eagle project. “When I started working on turtles in 1985, it was less organized – people were trying to help the turtles, but they weren’t always sure what to do.” Early volunteers used pool cues to probe for nests, and sometimes tried to “rescue” eggs and incubate them at home. These days, the guidelines are clear and the interventions minimal. Nests reports to DNR are standardized, as are the protocols for placing a predator-proof mesh.

Team leaders like Betsy carefully train any volunteers who use the lightweight probe that has replaced the pool cue.  Some volunteer for years before getting to probe for a nest, and then only after their probing skills are tested on simulated nests built by their human teammates. Volunteers new to the probe are almost always too tentative at first; no one wants to push too hard and lose an egg.

In fact, seven years ago, when DNR partnered with the Northern Recovery Unit Loggerhead DNA project, some volunteers balked at collecting the samples required. A sacrifice of one egg per nest was needed for the research, but volunteers hated the idea of losing even a single egg. 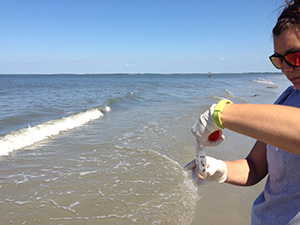 Storing eggs in a vial

Today, the study’s results have made converts of the skeptics. Volunteers now have access to pedigrees of the females on their beaches, and they sometimes mark nests knowing that they have safeguarded the eggs of a turtle, that can be traced to her daughter, grandmother, or aunt.   They can find out which nests are from a single female, since adults can nest 5-7 times in a single year. And thanks to the research, they can track the turtles as they move off their beaches on seaturtle.org. DNR also summarizes the entire program annually on their webpage. Volunteers today are not isolated; they have a strong sense of connection to the mother turtles, the DNR managers, geneticists, and even to other turtle volunteers on beaches far away.

This intimate connection between volunteers and the individual turtles on their beaches is part of what makes the program so successful. Charlotte and the other professional turtle staff at DNR still love the search—that much is obvious on the day Charlotte allows me tag along on a DNR beach patrol. Although volunteers cover many of the public access beaches, there are still miles of prime nesting habitat that pertain to the state or are difficult to access, and the DNR staff cover those beaches.

In addition, each DNR biologist manages a set of 5-7 Nest Protection Project team leaders, run a turtle stranding network, support research, comment on legal actions and permits that affect turtles, and determine the cause of death for turtles that are found dead. The professional staff are stretched thin and work hard, and even if they enjoy patrols, they don’t have the luxury of investing themselves in every nest on every beach. But the volunteers do, which is why the Nest Protection Projects are critical to turtle conservation. 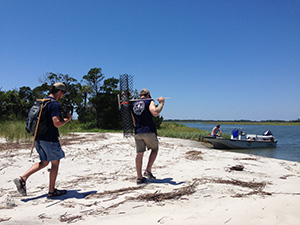 They call it a boil because as all the hatchlings start to break free at once, the sand seems to percolate with their movement. (Check out this video.) Then the little turtles burst through the sand, cross the nest that keeps them safe from predators and begin their perilous journey to the ocean. The water is no safe haven. It is filled with more hungry predators, boat propellers, and plastic debris to avoid. But thousands of volunteers and professionals along the coast have done their parts to ensure the little turtles have a fighting chance.