Six years ago, when the worst oil spill in U.S. history assaulted the Gulf of Mexico, we watched in horror, as images of crude-coated crabs, dead dolphins, and smothered shorebirds filled news reports. Many of us probably did not realize that a second wave of wildlife victims—unborn sea turtles—lay in eggs beneath the sands of Gulf Coast beaches, completely unaware of the devastation they’d face upon hatching and trying to enter oil-filled waters. 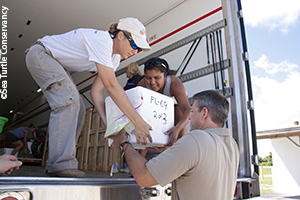 Fortunately, the non-profit Sea Turtle Conservancy (STC), the world’s oldest sea turtle research and conservation group, did. STC, along with NOAA, U.S. Fish & Wildlife Service, NASA and other partners, mobilized to locate, excavate, protect, and transport more than 70,000 sea turtle eggs to a climate-controlled facility at Kennedy Space Station, where, once hatched, they’d have a chance to make it to safer waters.

That is just one example of the many ways the STC actively furthers its mission to “ensure the survival of sea turtles within the Caribbean, Atlantic and Pacific oceans.” STC is perhaps most famous for its longstanding research program in Tortuguero, Costa Rica, the nesting site of more endangered green turtles than anywhere in the Western Hemisphere. This research was initiated in the 1950s by the organization’s founder, noted conservation biologist Archie Carr.

“Archie Carr is the acorn from which this great tree of interconnected efforts to study and protect marine turtles around the world has grown,” said David Godfrey, executive director of STC. According to Godfrey, much of what we now know about the basic biology, physiology, and life history of sea turtles came from research conducted at Tortuguero.

Before this research began, no one knew, for example, that green sea turtles migrate such long distances yet return to the beach where they were born to nest, that within each nesting season females may nest five or six times, that the temperature at which nests incubate ultimately determines the sex of the hatchling, or that emerging hatchlings orient to the water with a number of cues, particularly light. There is much about sea turtles that remains a mystery, but STC’s Tortuguero research has unlocked many pieces of this puzzle which have been consequential to conservation, and they continue to do so today. 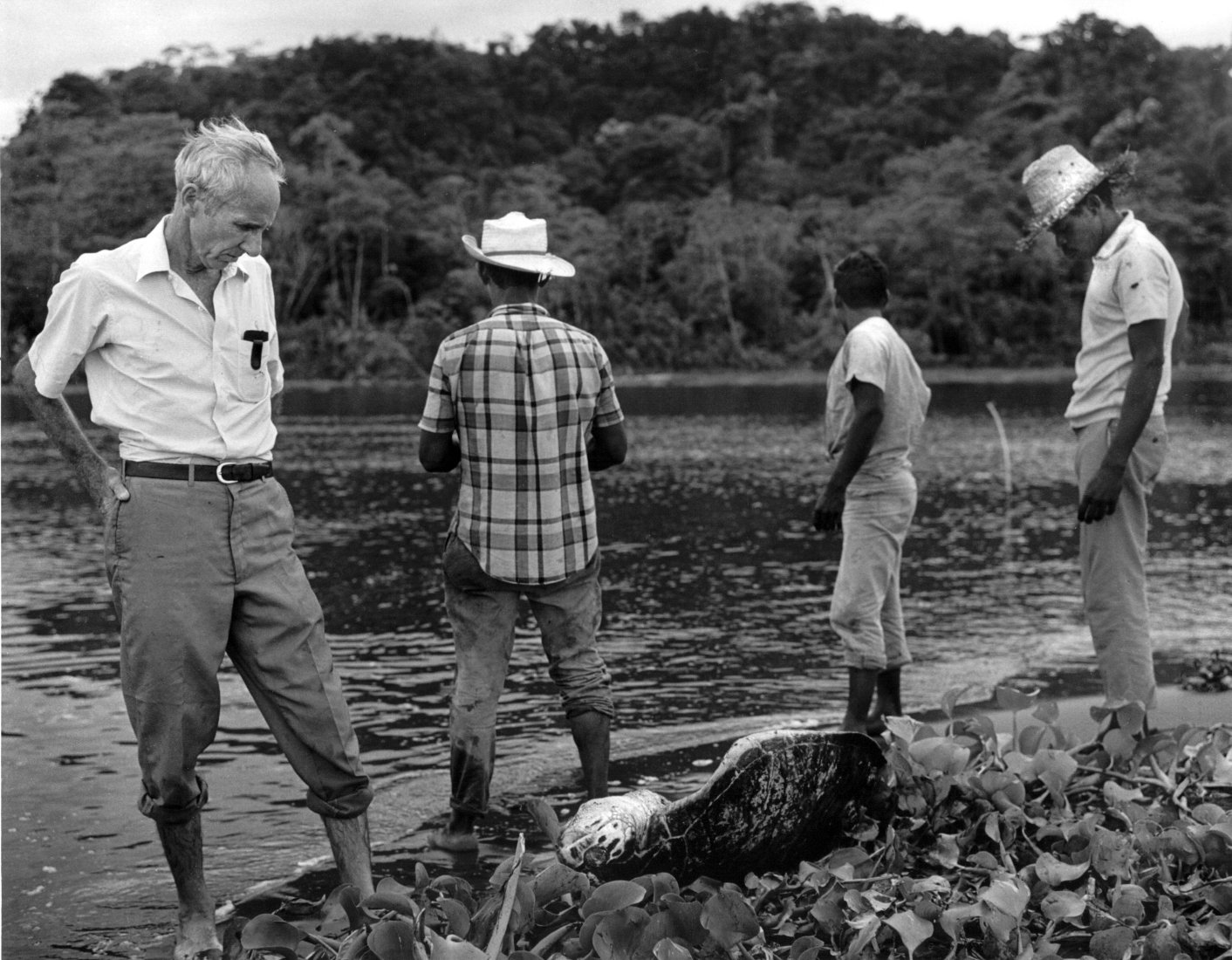 Tortuguero has also become a breeding ground, so to speak, for subsequent generations of sea turtle researchers. According to Godfrey, “Hundreds of the world’s leading sea turtle scientists got their start as research assistants at Tortuguero.”

In more recent decades, STC’s research, which now focuses on all sea turtle species, has expanded beyond Costa Rica to Panama, Bermuda, Nevis, Cuba, the U.S., and the Pacific coast of El Salvador. They also have collaborated with conservation research partners in the Guianas and Mexico. As the body of STC research grows, so, too, does our understanding of sea turtles and the impacts—both negative and positive—we humans can have on them. 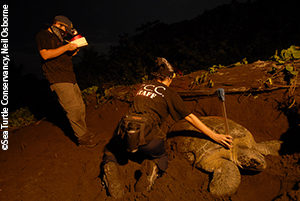 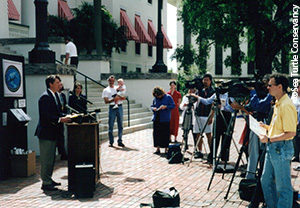 David Godfrey lobbies on the Florida Capitol for sea turtles

STC is also heavily involved in advocacy, and they know how to get results. For example, in 2000, STC helped defeat two proposals to re-open legal international trade in hawksbill turtle shell between Cuba and Japan. STC representatives were instrumental in convincing delegates to the Convention on International Trade in Endangered Species of Wild Fauna and Flora (CITES) of the potential devastating effect the proposals would have on hawksbills because of stockpiling of shell by dealers who would anticipate eventual legalization of the trade.

Godfrey cites an example a bit closer to the organization’s home in Florida. “STC has worked to develop a strong relationship with the Florida Shore and Beach Preservation Association, a group made up of Florida’s coastal counties, coastal planners and engineers, and people who are engaged in the business of beach re-nourishment,” he said.

They have worked together on joint legislation such as a coastal hazard notification law, which requires that buyers of waterfront property be informed of things like erosion rates, rules about building sea walls, and the protection of sea turtle nests. “The Sea Turtle Conservancy has helped change the way that organization discusses and incorporates sea turtles into their agenda.” 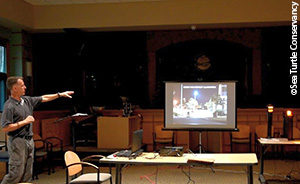 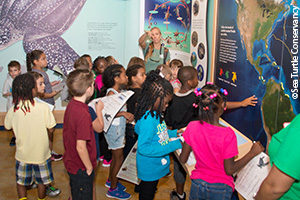 STC also engages in a variety of public education and outreach initiatives, including many that are conducted at the Barrier Island Sanctuary Management and Education Center, which located in the Archie Carr National Wildlife Refuge in Melbourne Beach, FL.

The organization’s origins trace back to the 1956 publication of Archie Carr’s The Windward Road: Adventures of a Naturalist on Remote Caribbean Shores, which chronicled his journey through the Caribbean in search of green turtle nesting beaches. It and sparked interest in sea turtle conservation and led to the founding of the “Brotherhood of the Green Turtle,” a group of people who wanted to support Carr’s work. The group, which quickly included Carr himself, ultimately became the Sea Turtle Conservancy. 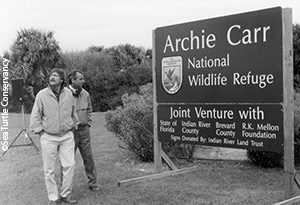 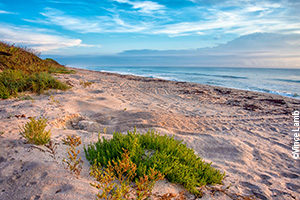 In the early 1990s, shortly after the Archie Carr Refuge was established, fewer than 100 green turtle nests were being laid in the refuge each year. According to Godfrey, this means that only 20-25 individual adult female turtles were nesting there.

“That exponential growth is not all because of the STC, but we certainly played a role in it,” said Godfrey.

Today, the organization is run by 11 full-time U.S. employees and another dozen permanent staff members in the other countries where it works, and is supported by more than 100 passionate volunteers who operate the STC’s Barrier Island Education Center and help monitor beaches such as Tortuguero. 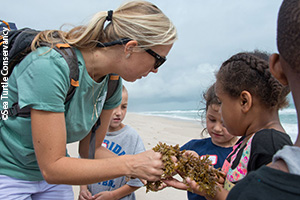 As a conservation nonprofit in its sixth decade of successful operation, STC can offer valuable insight into the keys to longevity. Godfrey credits three primary things: 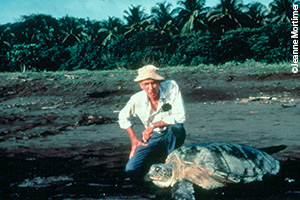 First: Archie Carr, a man who not only inspired the group in its early days, but kept it bound together. “He was a first-rate scientist and an amazing natural history writer who could appeal to the lay person as well the scientist,” said Godfrey. “He inspired people to care about sea turtles, and his passion, sense of humor, and real love of life were just…infectious.”

Second: STC’s human resources. “The next generation of people that Archie Carr inspired are in charge now,” said Godfrey, “and we’re continuing what he started very passionately”

Third: the sea turtles themselves. Sea turtles spend less than 1% of their life on land, and are not often visible by people other than boaters and divers. But when they are seen, according to Godfrey, they make a powerful impression that changes and motivates people.

“Here is this giant animal, this living dinosaur, crawling out on this beach that kids were building sandcastles on a few hours earlier. It starts digging an egg chamber, and then it drops 100 plus glistening eggs inside. It’s the middle of the night, and you are inches away from the turtle, so you can hear it breathing. You are watching something that has been taking place for millions of years. You are, essentially, back in the Pleistocene. That experience has such a powerful effect on people, and in my three decades of working in sea turtle conservation, this effect is something that never fails to amaze me.” 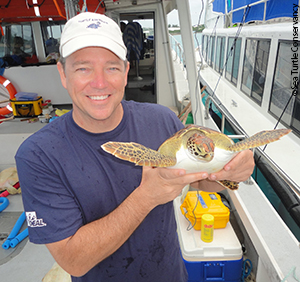 Six years ago, in the middle of the night, on a dark beach at Kennedy Space Center, the first wave of tiny sea turtle hatchlings emerged from eggs had been relocated and incubated after the Deepwater Horizon spill. 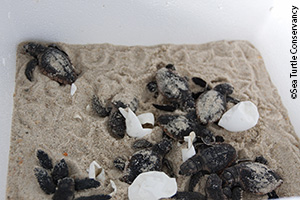 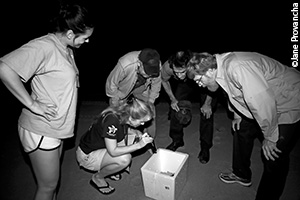 According to Godfrey, nearly 80% of those rescued eggs successfully hatched. The hatchlings were not tagged or tracked. But they were, thanks to the efforts of STC and others, given a second chance. “Their entry into the Atlantic was the last we’ll ever know about them,” said Godfrey.

With the Sea Turtle Conservancy pressing strongly toward its seventh decade, it is likely that many more sea turtles will not only have second chances but less need for them.

*We encourage you to visit the Sea Turtle Conservancy’s web site and check out the many ways you can support their wonderful work!

Book Review: Voyage of the Turtle: In Pursuit of the Earth's Last Dinosaur by Carl Safina

What You Can Do: Volunteer on a Turtle Patrol