Just east of Charleston, SC, the marsh-fronted Mount Pleasant neighborhood known to its residents as Scanlonville was founded just after the Civil War as a cooperative of freed African Americans–each of whom purchased $10 shares into the community. Within two years, the land had been subdivided into a town, including a park and a cemetery, and larger farm lots.

“The layout of this community built the community,” says Barbara Collier, who serves on the board of the local East Cooper Civic Club (ECCC). “We are the children and descendants of its original members.” 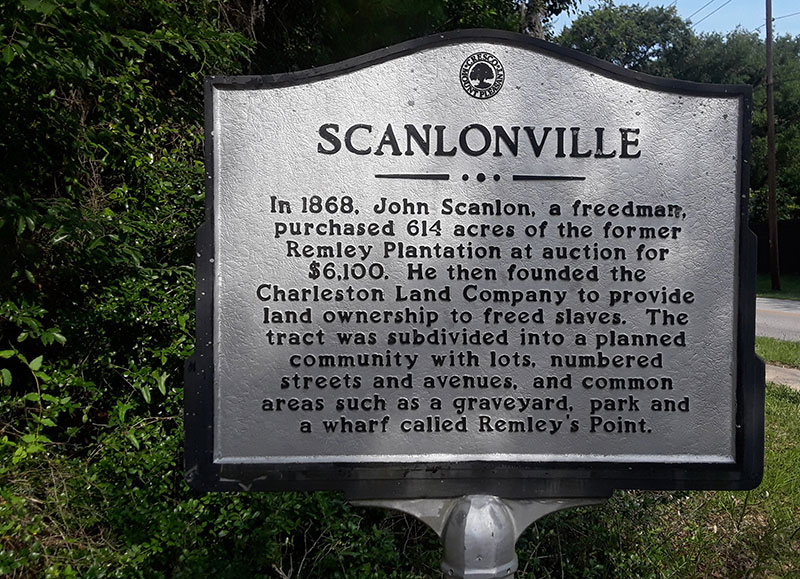 Although today Scanlonville is surrounded by multi-million-dollar waterfront houses, many in the community remember a different era. In the 1940s and ‘50s, Scanlonville was a stronghold of Mt. Pleasant’s emerging black professional class, with teachers and principals living on just about every block. Community members had ready access to the waterways and at the western end of the neighborhood was the most prominent black beach in the area.

“Back then, it wasn’t unusual to see James Brown in the neighborhood,” says Ed Lee, an architect who currently serves as president of the ECCC. “He used to hang around playing baseball with the kids before his waterfront gigs.” 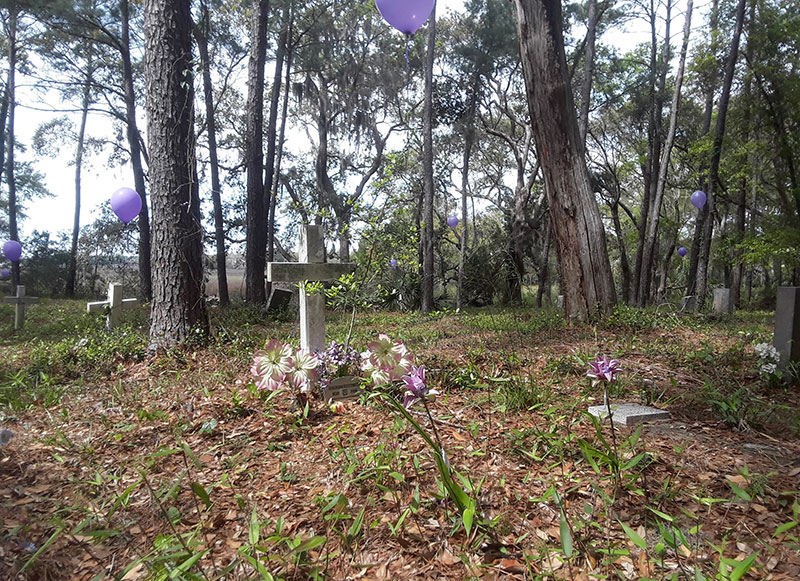 The Scanlonville burial ground, which reflects the traditional internment style of Gullah Geechee communities on sea islands, was the subject of previous land disputes. In that case, developers were attempting to move the people buried there to build houses with water access.

Once desegregation freed municipalities from an obligation to maintain separate beaches, the County of Charleston sold the waterfront to developers in 1975. That sale was one in a century-long series of land transfers that undermined the community’s cohesion and fostered resentment and distrust in local leadership and outside design efforts. It was into that deep history of disempowerment that East Cooper Land Trust executive director, Catherine Main, waded unknowingly in July 2017 when she entered the Holy Trinity AME Church for a public meeting on a new neighborhood park.

“I did not anticipate that the idea was going to be met with opposition.”

Back in 1999, the town of Mount Pleasant had purchased a small triangular parcel for $193,500 to build a fire station. When another site was ultimately chosen for the station, Holy Trinity requested that the land be transferred to the church, but they were denied. Almost twenty years later the Land Trust proposed a passive community park for the site and requested the town transfer the property to them. After finding support from a local architecture firm willing to donate services in return for naming the park for the firm’s founder, the town agreed and transferred the land for a total of $10.

According to Ed Lee, the issue was not that the ECCC didn’t want a park on the site, but rather that they wanted a park only if the planning process were guided by the community members.

On that warm July afternoon Catherine Main expected to hear feedback from the community about the proposed park–a piece of land she thought of as city property. But those speaking energetically in opposition saw it as a reclaimable piece of community history. They had no interest in a park dedicated to an outside individual–with no historic connection to the community–and instead wanted the land back within their control. There was no simple design solution that could address this history. In the aftermath, the architecture firm pulled out and the Land Trust eventually turned the deed over to the community, which is now leading a grassroots park planning effort. 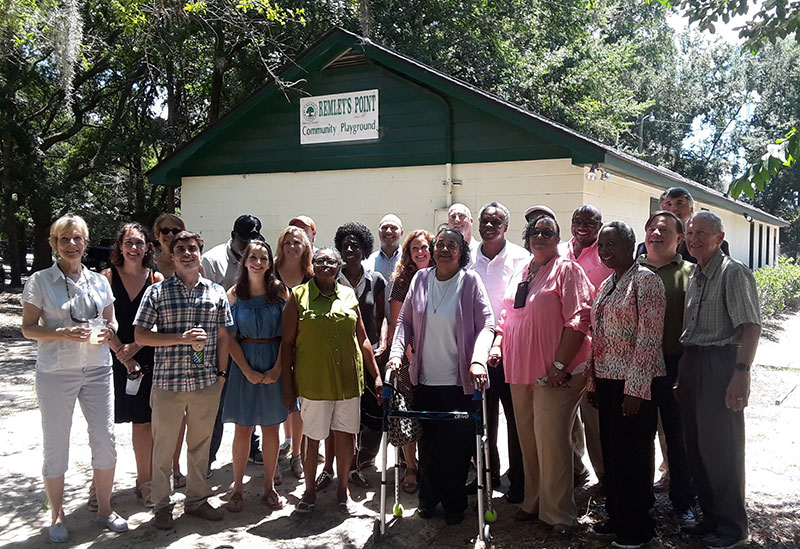 Representatives of the East Cooper Land Trust and East Cooper Civic Club on the day the deed was returned to the community.

While this particular narrative is unique to Scanlonville it represents universal challenges in greenspace planning–ones that are becoming more widely recognized in our field. Even small parks can serve as a microcosm for conflicts about history, disenfranchisement, and the question of who benefits from park planning.  They can in turn influence larger sociological trends.

As advocates for parks and green space access, many of us can readily rattle off their inherent benefits: access to safe green space promotes physical activity, psychological well-being, and general public health. Thoughtful green space designs provide a wealth of ecological services, reconnecting people to nature and building community.

We also recognize that those benefits are not evenly distributed throughout our cities. A recent article by Jennifer Wolch, professor of City and Regional Planning at the University of California, Berkeley, cites evidence that the distribution of green space disproportionately benefits white and affluent communities (see Further Reading). Remedying that situation is not entirely straightforward, though, and a non-careful rush to equalize access to green space brings its own challenges. Creating and improving green space are known to increase housing costs and property values and such efforts can actually be unpopular with local neighborhoods if they are seen as a warning sign or driver of gentrification and the cause of displacement.

Therefore, modern perspectives on urban development pay careful attention to who pays for and who benefits from urban parks and green space, as well as who makes decisions about land use. The questions of who decides how neighborhoods are planned and what sort of green space is provided have proven fraught as new residents come up against longstanding and often marginalized communities. Open space planning is increasingly bringing questions of racial equity, community participation, and urban investment together.

Our colleagues and clients are talking about this trend, as are scholars. The number of peer-reviewed papers on racism in urban planning appear from 2004-2008 is less than a third of the number published in the last five years. In our day-to-day practice, we all see evidence of heightened awareness. Clients are using more inclusive language in RFQs. Scopes of Work for outreach and public engagement sections are explicitly talking about equity and how to reach all members of a community. Despite an increase in awareness, however, there are few strong examples of success, and scalable solutions are difficult to find. The one refrain that seems to be echoed everywhere is the need for greater responsiveness to local community input.

“If you have a seat at the table for an urban planning project, look around and ask yourself who has the best relationships with the folks affected by the project.” –Marilyn Hemingway, Gullah Geechee Chamber of Commerce, speaking at a recent event in Charleston, SC

Although far from complete, we offer the following examples from among the tools of our trade–both the policy and planning techniques that we have seen employed to good effect by municipalities, and the outreach and engagement techniques that consultants and planners can use in project implementation. We are eager to continue this conversation and hear about other examples.

Contracting and Proposal Requirements. In recent years, we have seen some cities making a much more concerted effort to understand and require deeper, more authentic community engagement in many types of proposals. The GA/AL Metro Planning Organization, for example, newly requires community approval for contracts for transportation alternatives under the federal Surface Transportation Set-aside. Nearby, the City of Atlanta recently issued a Request for Design Proposals that required inclusion of a community resident as a team member – not just a specialist in community engagement, but a resident. Although these mechanisms present logistical hurdles, they also select for design and planning teams with authentic relationships in the community – ones that don’t just spring up overnight.

Local Housing Policies. Local housing policies such as inclusionary zoning, tax allocations, designation of historic or cultural districts, and community land trusts can help harness the economic gains from rising real estate values caused by gentrification and can be useful tools to create or protect affordable housing. Though outside the expertise of ecological planners, these and other similar policies are mechanisms that should be explored where housing costs are high or rising quickly, particularly where urban parks are being created or reimagined.

Transfer of Development Rights. In areas where greenfield development is creating new neighborhoods, these voluntary, incentive-based programs can allow landowners to sell development rights from their land to a developer or other interested party who then can use these rights to increase the density of development at another designated location.

Understanding Demographics. In the information age, we have increasingly powerful tools to document and understand trends and demographics. Projects such as Mixed Metro offer powerful visualizations of urban change.

Lowering Obstacles to Community Engagement. Earlier this year, Ithaca began offering childcare at all city council and commission meetings. Selecting appropriate sites and times and facilitators for community engagement is critical to ensuring that projects meet the needs of the neighborhoods. Innovative mapping applications that allow community members to provide input on their own time, such as Streetwyze, are another way to lower obstacles and increase engagement.

Accepting Community Design Leadership. Sometimes designers and planners need to let go of their ideas and simply accept that their competition-worthy high-design concept isn’t what is best for the community or what they want. The Neighborhood Design Center in Baltimore works directly with communities to design and build the parks and community open spaces that they desire, often working with architects, planners, and landscape architects willing to provide design services for more affordable (or sometimes pro-bono) fees. But this is not the only organization like this. The Association for Community Design, founded in 1977, has developed a national network of design professionals, organizations, and institutions focused on capacity building in communities.

Understanding the Community’s Needs and Concerns. Often the complexity of the issue of gentrification in a given community is misunderstood or glossed over. Displacement can occur through a variety of means, often based on historic and systemic racism that is much bigger than the park itself. In some historically-black communities, contemporary home ownership is shadowed by ambiguities associated with the lack of official legal documents of land ownership–land inherited over many generations without a will or title. This leads to limitations for what changes can made to the land and even how the land could be subdivided and sold if owned by multiple descendants. It is best to start community discussions with some foundational understanding of these issues before the discussion of a park or green space is raised. What are the financial or legal concerns that underlie a community’s capacity to remain resilient in changing economic times?

It is worth a reminder that each community is unique and relationships (and trust) don’t bloom overnight. It takes time and effort to establish a meaningful connection and explore the capacity each community has to inspire design. The more we can do that as designers and planners the more we will succeed in providing appropriate services in support of creating beautiful, functional, and inspiring spaces for many future generations.

Root Shock: How Tearing Up City Neighborhoods Hurts America and What We Can Do About It.  Mindy Fullilove. One World/Ballantine, 2005.

The Land Was Ours: African-American Beaches from Jim Crow to the Sunbelt South.   Andrew Kahrl. Harvard University Press, 2012.