Several decades ago scientists worried about the global effects of an all out nuclear war. Their hypothesis was that such a war would create firestorms that in turn would spread large amounts of black carbon or soot into the atmosphere. Their models showed a darkened sky lasting for many years, decades or more, causing a major destabilization of the Earth’s ecosystems and with it, untold harm.

We are beginning to witness the equivalent of a “nuclear winter” within the world’s waters. It is not being caused by nuclear radiation or firestorms, but carbon is definitely at the heart of the story. Unlike a nuclear winter, this tale has begun and is unfolding now, albeit at a slower pace. Lakes and rivers are “browning” and becoming murkier. This browning is blocking sunlight from getting to bottom dwelling algae and even to free floating phytoplankton in the waters above. This is reducing photosynthesis and as a result, internal oxygen production is less and in some cases almost extinguished. Fish habitats are being reduced or eliminated. The phenomenon has been chronicled around the world.

Browning is critical in so far as it affects photosynthesis and the production of oxygen. It is not widely known, but close to half of the global photosynthetic carbon fixation is carried out in aquatic environments. In short, these environments are important and possibly crucial to a healthy planet. Reversing browning should be at the top of the to-do list of the world community.

Browning of the waters has been caused by a dramatic increase of carbon into the waters. In this case, the carbon is dissolved organic carbon (DOC). The decade straddling the new century saw a doubling of dissolved organic carbon in the waters of North America and Europe and it continues to increase. The browning is influenced by, and is, influencing climate change as well. With less light entering the waters, non-photosynthesizing bacteria begin to dominate and feed directly on the organic carbon, producing more than normal amounts of carbon dioxide. The excess carbon dioxide in turn enters the atmosphere and drives climate change even further. 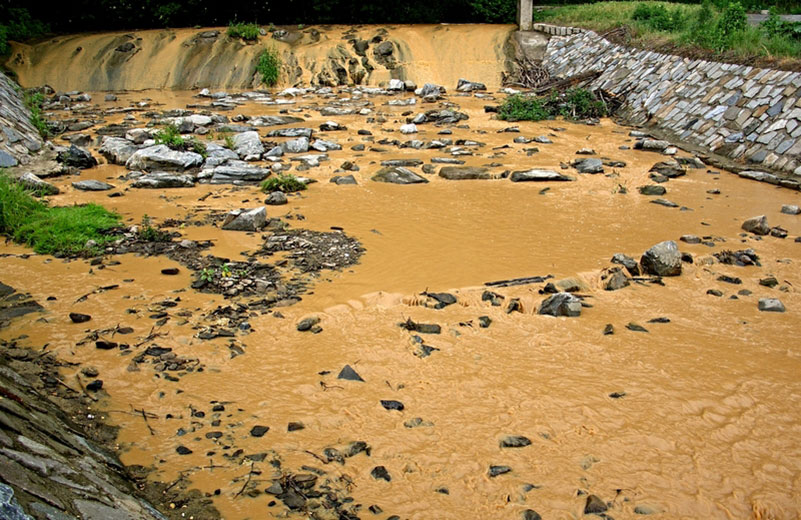 Some scientists have attributed the rise of DOC to a reduction in sulphur in the environment, resulting from declining acid rain levels as industrial emissions are being curbed. With declining sulphur concentrations, the dissolved organic carbon became “unstuck”.

While this may be a factor, I believe that the primary cause of the increase in browning may lie in changes in how landscapes are managed, particularly in agriculture. Modern farming and landscape management techniques, with their use of chemical fertilizers, pesticide, fungicides, herbicides, as well as constant plowing are breaking apart the ecological relationships that normally keep the various forms of labile and stable carbon in dynamic circulation in the soils. These factors, combined with loss of biodiversity caused by the increase in the scale of deforestation and expansion of monolithic lawn environments are compounding the problem. Soils systems, essential to the health of the planet, are subjected to stress and decline. The carbon content in soils is on the decline almost everywhere. The result is an exodus of dissolved organic carbon (DOC) into receiving waters during rains. The life that normally keeps carbon in the soils is going, or is gone.

Even a small country, like England, with its relatively benign climate, has lost over four million tons of soil each year for the past 25 years. On a global scale soil loss, and with it soil carbon, has been estimated to be at least 75 billion tons per year with an annual economic loss of 400 billion dollars. The figures are almost incomprehensible and tragic.

Yet this need not be. Soils can be created and improved. Courtney White in his book “Grass, Soil, Hope: A Journey through Carbon Country” writes of the experiences of successful soil rebuilding experiments around the world. It is a remarkable tale and one with the potential to revolutionize how agriculture and landscape management can be transformed in the 21st century. The breakdown of the world’s soils can be reversed, even in arid and semi-arid areas such as the American southwest. There are a number of working examples of this reversal already.

Healthy soils are very complex systems with unprecedented amounts of diversity. One of the most significant parts of the whole system is the relationship between the root systems of plants and their symbiotic relationship with beneficial mycorrhizal fungi, including ectomycorrhizal, ericoid mycorrhizal and arbuscular mycorrhizal fungi. This combined plant root and fungi mutualism is one of the keys to soil formation and the sequestration of carbon from the atmosphere.

Nutrients from the plant roots, including carbon, produce, in close association with the fine root hairs of plants and the hyphae of the fungi,

produce a sticky protein. The protein is called glomalin and has been described as one of nature’s superglues. Eventually glomalin binds itself to particles in the soil and forms larger and larger aggregates that mediate soil formation and carbon sequestration. The soils become resistant to wind and water erosion and a magnet for living organisms. In the process humus, the dark organic matter characteristic of rich soil, is created.

Soils are the greatest repository of carbon on earth. They play a seminal role in climate management. Healthy soils, with an annual increase in their carbon content, through farming ecologically, represent our best chance to bring climate change under control. High carbon soils are also our best chance of reversing the browning water bodies.

Through studying how soils and soil carbon work I have come to see that contemporary methods of remediating polluted waters are flawed by many of the same mistakes that are being made in agriculture and landscape management. The common use of chemicals, such as alum, (aluminum potassium sulfate) to control excess algae in lakes and ponds, weakens the ability of a lake or a pond to manage its own nutrient and carbon cycles.

Like most water stewards, I have been guilty of seeing the remediation of waters in a too linear fashion. As a general rule, I have followed Leibig’s law-of-the minimum. Leibig’s law states that the potential of a system, such as soil or a water body, is dictated by the amount of the least abundant nutrient. It is “a chain is only as strong as its weakest link” law. In the case of alum use above, the chemical phosphorus is deprived of its ability to cycle in the system by the alum and its effectively becomes the weak link in the chain. There needs to be a new approach to thinking about healing water bodies. A truly ecological approach will include managing nutrient cycles  and food webs in a comprehensive and holistic way.

[Stay tuned for Part 2, where John will discuss a carbon-centric approach to the healing of polluted waters…]