[Note: John Todd’s new book, Healing Earth: An Ecologist’s Journey of Innovation and Environmental Stewardship will be available on Jan. 29.]

In part 1 of this blog post, I described a phenomenon called the browning of waters. It involves dissolved organic carbon (DOC) being flushed from agricultural and other landscapes into streams, rivers and lakes. In recent years this process has been observed worldwide. As a consequence, the waters are becoming discolored. Less light is entering the water and the aquatic food webs are being “choked” by a lack of sunlight. I then discussed the nature of healthy soils and how they have mechanisms to recycle and sequester carbon, including dissolved organic carbon. I also chronicled their ability to purify water and suggested that organic soils should be seen as models or templates for the management of water bodies. I wrote that to reverse the browning of waters an ecological and broad landscape approach will be needed. 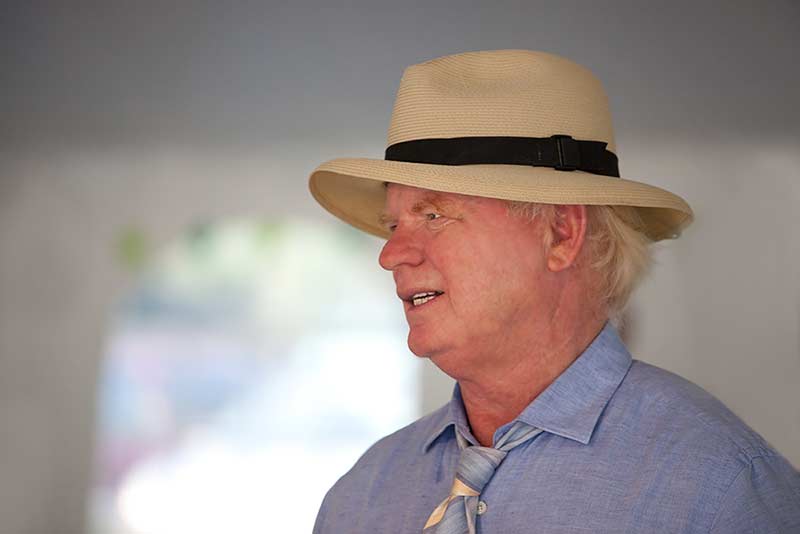 In my own work with eco-machines and floating Lake Restorer eco-machines, we consciously use living technologies to remove nitrogen from the water and therefore make nitrogen the limiting factor in the equation. This is done through a three-stage process. First, in the presence of abundant oxygen, often pumped into the water body at a significant energy cost, bacterial nitrification is triggered. Ammonia is converted to nitrites by one, and then another group of bacteria, also through an oxygen demanding process. Afterwards with the circulation of water through carbon rich and oxygen poor environments, the nitrates are converted to nitrogen gas through a bacterial process called denitrification. The nitrogen gas in turn leaves the water and enters the atmosphere. In this way, we limit nitrogen and mitigate excessive blooms of algae.

The ecologically based technologies including the eco-machines and their floating Restorer counterparts have proven to be effective technologies and many a body of water has benefited from their presence. Despite their successes, I worry about their efficacy in the big picture. They do the job, but we have yet to convincingly prove that they can trigger beneficial process that will allow a body of water to self-heal internally and sequester its own carbon as can happen in soils. Are we overlooking the carbon cycle? Might there be an equivalent of glomalin-the sticky substance secreted by fungal hyphae that can store carbon in the soil-being made by aquatic plants and fungi? 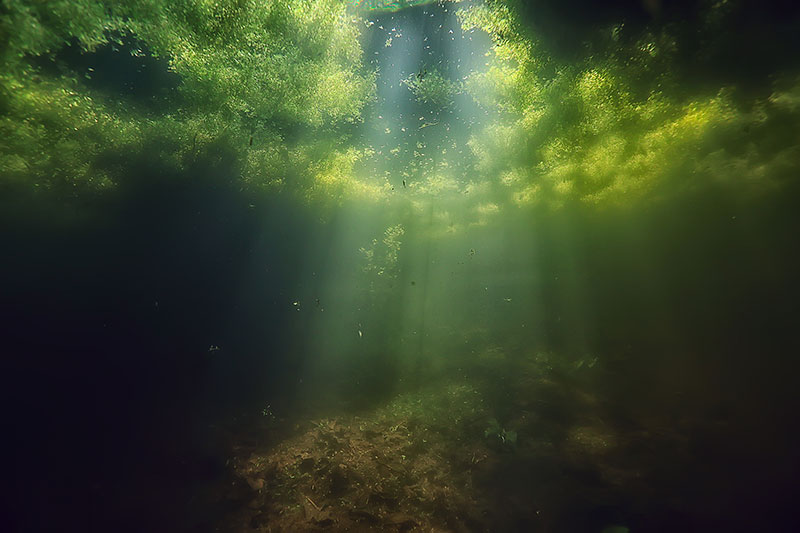 Although the literature is sparse, it has been found that the fungal and plant symbiosis, as well as glomalin, have been recorded from some, but not all, aquatic environments. This is good news if one is attempting to create a carbon centric rather than a nitrogen or phosphorus centric approach to the healing of polluted waters. In other words, what would it take to remove dissolved organic carbon (DOC) from the waters and convert that carbon into stable organic carbon based upon sticky proteins like glomalin. By focusing on the carbon side of the story we might just change the whole equation and create the aquatic analog of dark healthy soils.

The question arises: what is the best way to create treatment approaches that are holistic, embrace all the kingdoms of life, and obtain high rates of water circulation between the water body and living organisms, including plants and their root systems? Our ecological technologies also need to be designed to impact well beyond their immediate treatment zones. In other words, they need to function as incubators for beneficial organisms for the whole pond or lake. In an inshore marine environment, such as a bay, cove, harbor or salt pond, they would have to have a similar catalytic function.

Our hypothetical Restorer eco-machine would have to be comprised of a series of discrete elements. First, the water would have to circulate and possibly be aerated. We have used vertical axis windmills in the past, as well as solar cell-based circulation and aeration. In Great Pond in Massachusetts we used a hybrid solar electric/wind generator to good effect. Second, it will be necessary to continuously feed the technology with beneficial organisms with trace minerals and electrolytes. This mixture should include algae, fungi and bacteria, trace minerals from rock powders, or seaweed and mineral electrolytes capable of carrying a weak electrical charge. Third, the technology needs a huge amount of surface area to support the above organisms. Years ago, I created and patented a technology that I called an ecological fluidized bed. Very large volumes of water were air lifted through a semi buoyant media with attractive microsites for beneficial organisms. Another way to put large volumes of water in contact with surface areas would be to circulate the water through the roots systems of plants floating on the surface. The fine roots hairs of plants have incredible surface areas for treatment. Fourth, the water needs to flow through carbon rich sediments, the equivalent of soils in lakes and ponds. This is done with the aid of course media bottom filters through which the water is circulated. Water treatment in these out-of-sight zones can be remarkable. Finally, our Restorer eco-machines need to be biologically diverse. In some cases, aquatic life from over half a dozen local water bodies contribute to the system. Filter feeders, such as freshwater mussels, are especially important. Plant species like bulrush (Scirpus spp) are also key actors on this ecological stage.

The other key challenge will be for us to create really cost-effective solutions that would allow communities to willingly adopt an ecological approach to managing their waters. Maybe a step-by-step approach would be worth a try. The first step would be to create water circulation, followed by a second step, namely the addition of beneficial organisms and trace minerals. There is a significant amount of field evidence that employing the right kinds of supplemental microorganisms of sufficient density can dramatically improve water quality.  This includes improved water clarity, the inhibition of algae blooms, nitrification and denitrification, as well as the digestion of bottom sediments. What is missing is sufficient hard evidence that proves microbial supplementation is effective in a variety of settings. 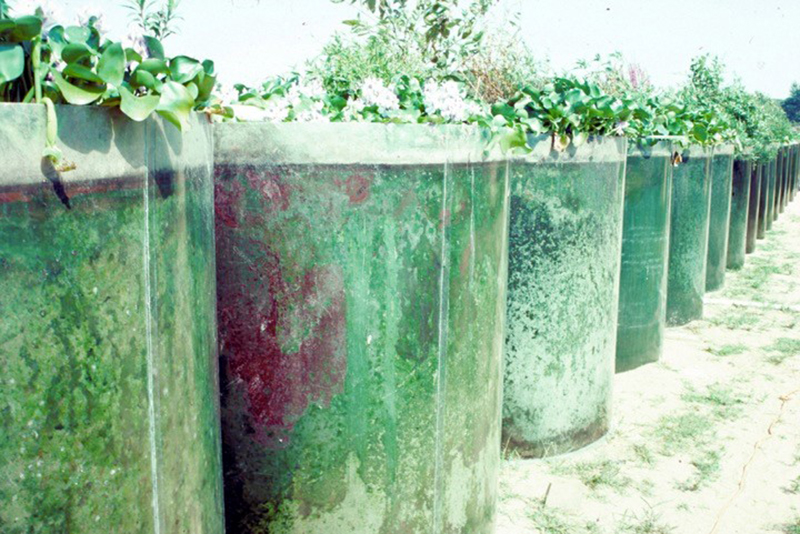 Life does the work in an Eco-Machine™

Depending upon feedback, if the system is not responding dramatically, it might be wise to ratchet up the process to a third step that would include high-rate Restorers with both aerobic and anaerobic treatment components. Of course, each step would increase the treatment cost, hence my step-by-step approach.

Let’s return to my larger concern, namely the healing of waters and the equally important task of making ponds and lakes sinks for stable carbon. While we do not have a lot of evidence to go on yet, we do know that healthy ponds and lakes can be carbon sinks, whereas degraded ones are excess exporters of CO2 into the atmosphere. If we can combine water remediation with aquatic carbon sequestration, there is a good chance that we will find ourselves on the front line of helping stabilize the earth’s climate.

Thoughts on Eco-Voluntourism
Thoughts On Ecological Restoration Construction, Planting & Management
“I just want to say one word to you. Just one word….plastics.”
Get to know Senior Ecologist, Josh Wilson
COP10: What should communities around the world be doing to conserve biodiversity?