Erica Robak cautions us not to rely on gut instinct when it comes to understanding people, and instead turn to psychology to inform our efforts to promote behavior that benefits the biosphere.

In a commencement speech given several years ago, novelist David Foster Wallace told a story about two young fish swimming along one way, who encounter an older fish going the other way. (Stop me if you’ve heard this one). The older fish says, “Morning, boys, how’s the water?” One younger fish looks at the other and says, “What the hell is water?”

As proud possessors of giant frontal lobes, capable of self-reflection and awareness of the world around us, it can be easy to assume that we understand how our minds work. But being a fish who can’t see water has its drawbacks. For decades, economists operated on the basic assumption that when shopping, humans will logically and objectively weigh all available evidence, and arrive at the decision with the highest “expected utility,” (sounds fun, right?). Many of us can probably guess from personal experience that this model doesn’t predict the market terribly well. Or at least it doesn’t for me. I can tell you with full confidence and absolutely no shame that I didn’t impulse-buy eight packs of Oreos because I believed they represented the highest expected utility.

After a little digging, psychologists found that our decision-making is influenced by a number of rather irrational factors. For instance, many of us engage in magical thinking (think: wearing a lucky pair of socks because you know it will help your team win). And still more common is the phenomenon of cognitive dissonance, which happens when we do something that isn’t consistent with how we think (think: someone who wants to get in shape but who also hates exercise, eventually convincing themselves that fitness culture is just a soul-sucking racket designed for the exclusive purpose of making people feel bad about themselves). That is not to say we make decisions thoughtlessly. On the contrary. In the process of making every day decisions, we evaluate whether or not a behavior is ethical or matches our personal values. We make decisions that could hurt people, or jeopardize our happiness in the future if we don’t get them right. A decision about how we behave can represent the core of who we are, and yet researchers have found that our moral centers can be manipulated using magnets (really: http://n.pr/1AmFMke). This is not to reduce the essence of who we are as a species to so many ferrous metal shavings to be moved around at the whim of any passing magnet, but what it does mean is that there is a certain power in understanding the influences and forces that impact our thoughts and actions.

These forces can end up having some very concrete consequences. We are all aware that human factors have created much of the environmental mess we find ourselves in today. But it’s not as though people intentionally set out to do harm to the environment.  So what are the forces influencing environmentally destructive behavior, and how can we best combat them?

Fortunately, there is a powerful resource available to help answer this question, and it’s not our own gut instinct. It’s the field of psychology. Psychological research can show us, for example, that if we want to promote pro-environmental behavior, we’d better be ready to take into account factors like convenience, ease, and comfort. Psychology can also help us understand why it’s so difficult for some people to grasp their impact on the environment.

Often, psychological research will illuminate a quirk of human behavior that may be surprising. For instance, the Petrified Forest National Park in Arizona used to post signs that informed hikers that many people had picked up pieces of petrified wood during their visit, which has caused tremendous harm to the forest. These signs did nothing to deter people from collecting pieces of petrified wood. Psychologists found instead that this reinforced a perceived social norm for collecting wood (“everyone is stealing, so I can too.”). On the other hand, signs that simply read, “Please don’t remove the petrified wood from the park, in order to preserve the natural state of the Petrified Forest” were far more effective. This is just one of the ways that psychology can help projects flourish by garnering pro-environmental behavior and support from a community. 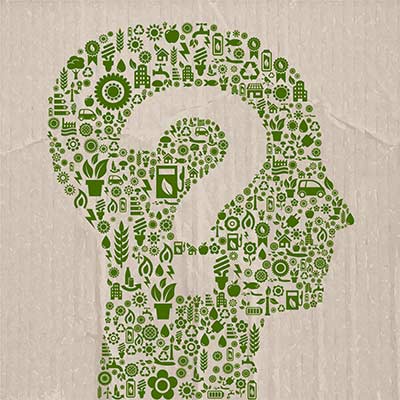 Even on a small scale, as in the example above, good design comes from a full understanding of its intended users, and like it or not, these users include human beings. When we consider design options for a stream or wetland yes, we’re serving the earth and other species, but it is an unavoidable fact that we are users who can either foster or counteract positive strides toward conservation and regeneration in developed and wild spaces. As someone who has studied psychology and works at an environmental firm, it is fascinating to see on a daily basis how psychology is already informally involved in many projects. A plan to improve stormwater management on a university campus is crafted with student enrichment and education in mind. When a project affects a community, the people of that community are included the process.

Studying psychology can sometimes feel like studying the currents. They are invisible, yet hugely impactful. And they change. Imagine sailing without understanding what a current is or how it functions. The same goes for navigating a project from inception to completion. Psychology has so much useful information at its fingertips, and while it certainly does not have the answers to all our questions, it can go a long way to building a better, more self-aware, evidence-based environmental practice.