The Alaska Institute for Justice is working with Alaska Native communities on the front lines of climate change to build a framework for relocation governance that ensures the protection of their human rights.

Alaska is home to 229 federally-recognized tribes of Alaska Natives, many of whom literally live on the front line of a rapidly changing Arctic climate. For many of these peoples, the impacts of climate change on their communities are direct and dramatic. Erosion, saline intrusion, and land collapse caused by extreme weather events and thawing permafrost is threatening infrastructure, property, access to potable water and for many communities, their very way of life.

A 2009 report from the Government Accountability Office stated that 31 Alaska Native villages were facing imminent climate-related threats, and 12 of those communities were already exploring relocation options. Yet there is little to no government accountability–on the federal or state level-when it comes to assisting communities in determining when and if they need to move, or helping them to plan, finance, and implement a relocation. To date, only one community in the US has received a grant from the federal government to relocate in response to climate change. That was Isle de Jean Charles in coastal Louisiana and it was through the National Disaster Resilience Competition (NDRC), organized by the Obama administration in 2014. The Alaskan town of Newtok was in the running for the grant but unfortunately, they didn’t make the final cut.

Moving an entire community, however small and remote, is a daunting undertaking laden with physical, logistical, and political challenges. For indigenous people whose culture and livelihoods are often deeply connected to place, the decision to relocate also carries the weight of serious cultural and economic impacts. If a community doesn’t have a plan in place, then residents may be forced to scatter when their towns become inhabitable – potentially losing their connection to their language and culture as families find new homes in bigger cities like Juneau or Anchorage. Some Alaska Native communities have made the decision to move but cannot do so because they lack the funding and frameworks for planning and implementing a relocation. Meanwhile, their health and well-being, like their very land, is eroding. In the village of Chevak, for example, erosion, flooding, and permafrost thawing has impacted access to traditional foods and the viability of community infrastructure. Emergency erosion control measures in the Native Village of Kivalina, located at the tip of a chain of barrier islands, is not sufficient to protect the community’s airport, landfill, and drinking water source from impacts of increased storms, erosion, and permafrost thaw. 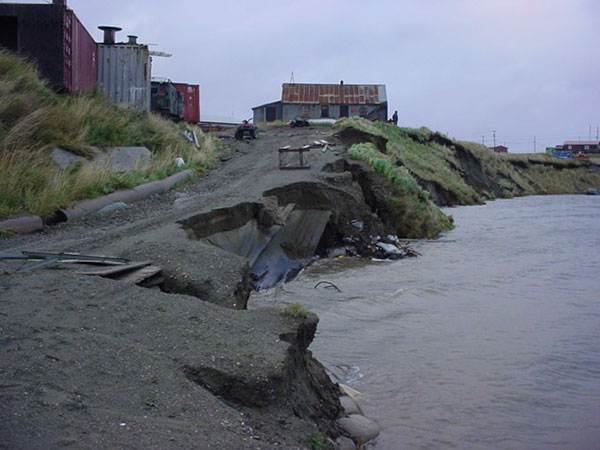 Fortunately, the Alaska Institute for Justice (AIJ), a nonprofit organization dedicated to protecting the human rights of all Alaskans, is implementing an initiative aimed at increasing the adaptive capacity of Alaska Native communities experiencing the impacts of climate-induced environmental change. They are working with Alaska Native communities to design and implement a community-led approach to decision-making about community relocation in the face of climate change. The AIJ’s ultimate vision is a relocation governance framework that protects human rights and can be used by communities throughout the world.

The concept of “relocation” has a very painful legacy for many minorities in the US, including the Alaska Native communities, one fraught deep feelings of alienation, pain, and subordination. “The only examples of governments relocating communities involve forcible relocation,” said AIJ Executive Director, Robin Bronen. Those examples include the U.S. government’s relocation of 881 Unangan people from the Aleutian and Pribilof Islands to internment camps in Southeast Alaska during World War II. Ten percent of the Unangan population died as a result of that relocation. Thus, the idea of turning to existing or past models of government-run relocation programs was never a consideration for the AIJ. They needed to take a different approach – one grounded in community.

In 2016, in partnership with NOAA and the Alaska Native Sciences Commission (ANSC), the AIJ convened 15 Alaska Native communities to begin the process of developing a relocation governance framework that fit their needs and considered the social, cultural, and environmental preservation priorities associated with voluntary relocation. The first Rights, Resilience, and Community-Based Adaptation Workshop resulted in the sharing of knowledge and expertise between Alaska Native Communities, and the strengthening of partnerships between Tribes and representatives from state and federal governments.

Relocation is a long-term, multi-year process, and the AIJ wants to ensure that throughout this process, Alaska Natives’ rights to life, self-determination, subsistence, safe drinking water and housing, and to practice cultural traditions are protected.One of the most important steps is determining when and if a community should relocate. No governance framework exists to evaluate climate change impacts and determine when people can no longer be protected in place. Simply put, there is no handy, step-by-step instruction book to guide communities through the process of determining whether and when relocation is the best strategy for long-term climate adaptation.That is why the development of a social-ecological monitoring tool to help communities begin the process of relocation decision-making is the group’s current focus.

“Models with algorithms tell a story, but they are not stories that policy makers can use to make decisions,” said Bronen. “We are developing a tool for community-based monitoring of erosion, permafrost thawing, sea ice conditions, and storm impact narratives. All of that information is critical to get a holistic, community-based picture of environmental change and to identify relocation indicators and start a relocation process.”

The group believes that building the capacity of communities to monitor and assess climate change themselves will also help ground truth or confirm regional environmental data generated by State and Federal agencies. These communities become citizen scientists and their own best advocate.

AIJ’s second workshop took place in September of this year, and while they continue working on the tool, challenges remain. According to Bronen, those include the prevailing lack of a legal foundation to drive action on relocation governance and other climate-related issues.

“I have a law degree,” she explains. “Climate change is making the laws that govern us anachronistic. If you look at this issue of relocation, or wildfires, or the way we do ‘natural resource’ management, you see that our laws are not responsive to the way climate change is radically impacting our environment and the habitability of the places people—and other species–live.”

In the coming year, the adaptation group will expand to include individuals from communities in the South Pacific.

“It is critical to involve regions of the world where people are not in denial and recognize that this is the consequence of our collective failure to reduce greenhouse gas emissions in creating strategies for the world,” said Bronen. “This is not just an Alaska issue.”

What can others do to advance progress in developing a relocation governance framework? Supporting the AIJ is an option. “Funding is a critical issue. We are a small non-profit taking on an enormous issue. The work we are doing in Alaska is directly feeding into the UN system because there are no other organizations that I know of in the world who are trying to address this governance issue of determining when a community decides that protection of place is no longer possible. “

(To donate to the Alaska Institute for Justice, please visit their web site)

What else can Leaf Litter readers do? Bronen offers this recommendation: