Book Review: All the Wild That Remains by David Gessner

The beauty, majesty, and vastness of the landscapes of the American West have influenced the work of writers Wallace Stegner and Edward Abbey.

This spring I ventured for the first time to the high desert of Northern New Mexico. I had no idea just how much this storied part of the American West would capture my imagination. Its vast, brown-hued landscapes, dotted by small trees, shrubs, and groundcover in a palette of muted greens were a far cry from my humid, verdant, and near sea-level home along the Chesapeake Bay. It was at once magical, terrifying, and exhilarating. I was occasionally lightheaded and winded from the change in altitude, and always thirsty.

Before my trip, this other-worldly place had been brought to life for me most vividly by the paintings of one of my favorite artists, Georgia O’Keefe. 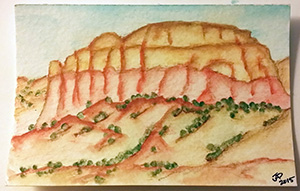 The landscape inspired this watercolor by Jennifer Dowdell

While in New Mexico I made a pilgrimage to O’Keefe’s former home, Ghost Ranch, to see the landscape that had so inspired her. It was a majestic space encircled by reddish golden cliffs in all sorts of fantastical formations; crevices and cracks that held the stories of the millennia. It was overwhelming in its beauty, otherness, and sheer size. I was humbled, quieted, and in awe. And while I wasn’t sure at the end of my trip that I could ever make this place home, as she had, it remained with me long after I’d returned East, in my mind’s eye.

Many artists, writers, and creators have been similarly enamored by the American West. It has captivated us, and inspired us to think differently about landscapes, open space, wilderness, and the natural world. 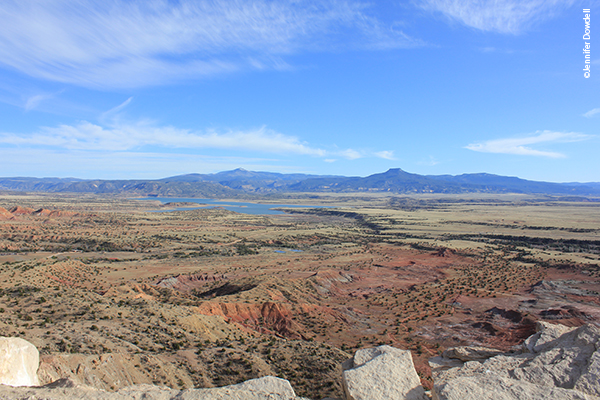 In David Gessner’s new book, All the Wild That Remains, the American West serves as both backdrop and supporting role in the lives of two of modern America’s literary luminaries: Wallace Stegner and Edward Abbey. While the book is, at its heart, an interwoven biography of these two men, it is also a travel chronicle, following a 9,000-mile trek to see and experience the places that helped shape these men and their writing. 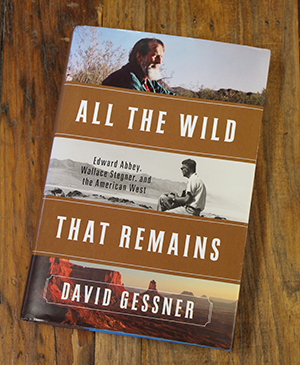 Through a combination of interviews with Stegner’s and Abbey’s contemporaries, friends, and families, as well as a deep reading of their published works and personal papers, Gessner fashions a story of opposites. “Stegner’s dream was of a western community where good people worked together toward a common good. Abbey’s dream was a solitary one, a dream of retreat.” Stegner was a man focused on productivity (writing books), community, and hard work; working within the system to affect change in development policies affecting expansion in the West. He was domestically oriented, married to the love of his life for many years, and devoted to family.

Abbey, on the other hand, was a wild man. Embracing a more solitary experience with the western outdoors, he fought the system for change from the outside, occasionally giving it the middle finger both figuratively and literally (photo on page 171 as evidence of the latter). Abbey was a man of passion and emotion, writing from the heart, carrying that passion through multiple marriages, enjoying the sensual pleasures of the body as much as the bliss of the wilderness.

Gessner’s book is at the very least an invitation to read (or re-read) the books of both men and consider how these landscapes shaped who they were and what value Stegner and Abbey saw in the great wilds of the American West. But it is also a call to re-evaluate the almost prescient themes that these two men return to in their books: the vulnerability of nature in the West, and the great importance of preserving wilderness for future generations.

Running throughout the book is the motif of a parched landscape, a cracked skin that cannot heal quickly, especially as we continue clamoring through these spaces with our mountain bikes, cars and campers…and our drilling equipment. Gessner argues that no one is immune from responsibility for the damage that has been wrought on these landscapes and everyone is responsible to take action to slow the destruction. He asks the question: What is it to celebrate and explore these vast areas without bringing ruin to them?

About halfway through the book we ride with Gessner and a friend down the San Juan River in New Mexico, whose water eventually empties into the Colorado River, the lifeblood of the West. It’s an opportunity for Gessner to experience a trip not unlike those chronicled in Abbey’s Down the River, and Stegner’s short stories, The Sound of Mountain Water. He considers the two men’s approach to the narrative of the West, while focusing on a theme that Gessner keeps returning to: the role of water in the landscape. Water is the life force that has cut these canyons and yet stays just out of reach most of the time, in dark foreboding skies. The rain finally comes during this river rafting trip, after almost 200 pages of waiting and wondering.

“So much of the week has been spent speculating, ‘what would these canyons be like with water?’ Now I knew. The tadpoles, previously trapped in their puddles were liberated. The ever-thirsty trees and ferns and flowers all drank deeply, were liberated. As beautiful as the canyons had been—and they had been the highlight of the trip—it had been a little like seeing the body with the blood missing. Now I got to see the canyons in use. Serving their purpose. A deep orange-red like Tabasco sauce flowed down the stairways and terraces of rock. To live in this particular landscape is to be, whether you like it or not, a water worshipper. One can imagine that this worshipping will become more fervent in the dry years ahead.” 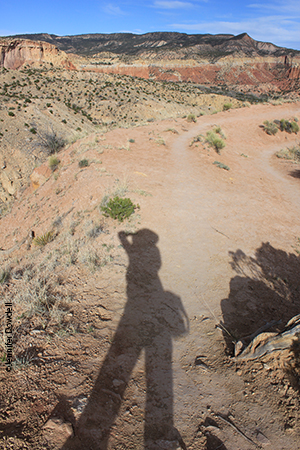 It is an ambitious task to write a biography of two fairly different men who are writers themselves, while providing enough space to examine the massive landscapes that define the American West, and exploring issues of landscape connectivity, ecosystem degradation, and climate change. Gessner cannot delve deeply enough to satisfy perhaps every environmental scientist and landscape ecologist focused on affecting change in ecosystem management and stewardship. Then again, he does a great job of raising many important questions about how we experience landscapes and tell their stories, and he invites us all to consider what is left for us to do… whether that’s to pick up one of Stegner’s or Abbey’s books for further inspiration, or to get to work reconnecting these spaces and preserving them for future generations.

What You Can Do