Non-Profit Spotlight: Global Alliance for the Rights of Nature

The Global Alliance for the Rights of Nature is a dedicated to ensuring that nature in all its life forms has “the right to exist, persist, maintain and regenerate its vital cycles.”

In terms of progress toward reducing global emissions, the United Nations’ 2009 Climate Summit in Copenhagen was widely regarded as a failure. Yet in its failure, it may have done more for the planet than any international treaty ever could: it sparked a grassroots reaction among those who realized they could no longer wait for established, international organizations to lead the way to a more sustainable future. Among them was by Bolivian President Evo Morales, who called for a “People’s Conference” on climate change. 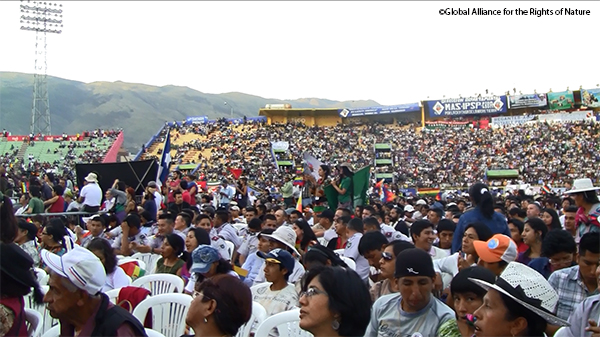 Merely four months later, 35,000 people from over 140 nations gathered in Cochabamba, Bolivia for the World People’s Conference on Climate Change and the Rights of Mother Earth. During the three-day conference, a Universal Declaration of the Rights of Mother Earth was crafted, and there was a call for the establishment a global advocate for these rights. Not long afterward, in September of 2010, 26 visionaries from six continents gathered in Patate, Ecuador to form the Global Alliance for the Rights of Nature, an organization dedicated to ensuring that nature in all its life forms has “the right to exist, persist, maintain and regenerate its vital cycles.”

The organization’s founding members include such luminaries as Vandana Shiva and Maude Barlow (both of whom have been featured in previous issues of Leaf Litter). Today, membership has swelled to more than 1,500 individuals and over 140 member organizations representing every continent. 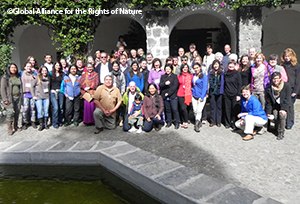 The establishment of the Global Alliance for the Rights of Mother Nature (Alliance) was a major milestone for a movement that had begun even before the 2009 Copenhagen conference. In 2006 and 2007, the coal-mining borough of Tamaqua, Pennsylvania, working with the Community Environmental Legal Defense Fund, became the first U.S. community to give nature rights by passing two local ordinances to prevent the dumping of toxic sewage sludge and other waste in abandoned coal mining pits. The ordinances recognized natural ecosystems as legal “persons” and stripped corporations that engage in the land application of sludge of their rights to be treated as “persons.” In 2008, with a newly elected president in power, Ecuador rewrote its constitution to include the recognition of the rights of nature. Shortly after that, Bolivia, drawing on its indigenous peoples’ concept of Pachamama (translates as “Mother Earth,” but includes the cosmos), passed The Law of the Rights of Mother Earth, granting nature the rights to life, regeneration, biodiversity, water, clean air, balance, and restoration.

Pushing for universal recognition of the rights of nature, and ensuring that these rights transfer from paper to progress, is central to the mission of the Alliance. In addition to organizing international meetings and events, the Alliance works towards this mission through five working groups. The International Advocacy working group aims to build support for the Universal Declaration of the Rights of Mother Earth. The Indigenous Peoples Ancestral Knowledge Working Groupprovides a platform for intercultural dialogue related to the Rights of Nature led by indigenous voices. The Economics Working Group provides information about the dominant economic system and efforts to create alternatives that support the rights of nature. The Legislative Working Group, which is led by member organization The Community Environmental Legal Defense Fund, works to implement enforceable legal structures that recognize the rights of nature at both national and global levels. The Communications Working Group maintains a clearing-house of relevant, current information and resources.

According to the Alliance’s Administrative Director Robin Milam, the organization’s greatest accomplishment to date has been its 2014 launch of the International Rights of Nature Tribunal. The Tribunal is intended to provide people from all around the world the opportunity to testify publicly as to the destruction of the Earth. It also provides a platform for informed legal analysis of diverse cases based on the rights of nature. At Tribunal hearings, an international, esteemed panel of judges hears cases presented on behalf of nature and then recommends actions for reparation, mitigation, restoration, and prevention of further damages and harm.

“By design,” explains Milan, “we host the Tribunals parallel to the UNFCC Climate Change Conference because we see the Tribunal proceedings as a viable alternative to the false solutions that are being presented [by the UN].” 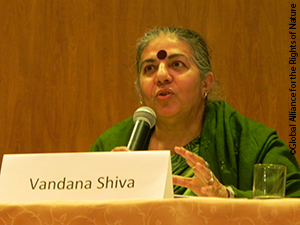 Vandana Shiva presiding over the Tribunal in 2014, Quito, Ecuador

At this stage in the Tribunal’s development, its authority is limited. “Its authority comes from the people who participate in it,” said Milam. The Alliance’s vision for the Tribunal is that it will ultimately have the same level of authority currently granted to international tribunals that are based on human rights. Until that time, the hearings serve as a powerful tool for international networking among all Rights of Nature stakeholders—including indigenous and non-indigenous groups, social justice and community rights organizations, earth jurisprudence advocates and attorneys, and concerned citizens. They also help raise awareness of the injustices inflicted upon nature by people and corporations, and demonstrate how systems of law and governance might look if grounded in a legal philosophy that recognizes the rights of all of nature (rather than the rights of only humans and corporations) and a world view in which humans are understood to be a member of (rather than master of) the larger community of life on Earth.

For those of us unable to travel to the sites of international climate change conferences to support the Alliance, there are other ways to get involved in the organization. One is to make a donation. “Funding to support the work of the Alliance is a critical need,” said Milam, “particularly in this time when environmental activists are being threatened.” The need to protect defenders of nature’s rights became frighteningly real for the Alliance around the time of the 2nd Rights of Nature Tribunal in Lima. The Tribunal’s lineup included a case against the Mirador Mining Project, an open-pit mining operation run by a Chinese conglomerate in the Cordillera del Condor, one of the most biodiverse and fragile ecosystems of Ecuador. José Isidro Tendetza Antún, an indigenous leader of the Shuar Federation of Ecuador, was to present the case and describe how the project was degrading fragile ecosystems in the Andes and polluting tributaries to the Amazon River. Three days before Tendetza was slated to testify, he was found murdered—bound and floating in the Chuchumbleza River. 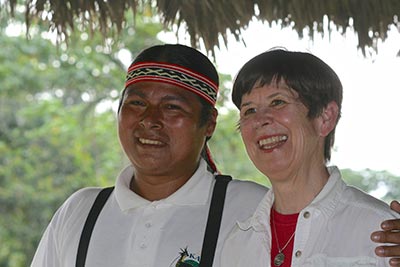 Robin Milam and a friend in Ecuador

Another way to get involved is to volunteer. “We have a very deeply dedicated group of volunteers,” said Milam. She should know; she’s one of them. For more than three decades, Milam provided technology and strategic planning services to clients like IBM and American Express. A 1997 trip to the Ecuadorian rainforest with the Pachamama Alliance, a non-profit that partners with indigenous communities to build support for the protection of their lands and culture, changed everything for Milam. Witnessing the beauty and biodiversity of the rainforest and its indigenous cultures, but also the impact of oil drilling on both, inspired her to act on behalf of the rights of nature. “I got to see first-hand the impacts of our consumer-driven economies on the rainforest,” she said, “and it had a very profound impact on me.” Today, in addition to providing her technology and strategic planning expertise to the Alliance free of charge, Milam leads—at the invitation of the Achuar people of Ecuador—an annual Pachamama Alliance trip to the Ecuadorian rainforest.

Milam’s corporate experience has granted her insight that may be rare among environmental activists. “The corporate world is made up of individuals, and plenty of those individuals care deeply about each other and about our planet,” she says.  This insight is also helpful when it comes to furthering the recognition of nature’s rights. Milam believes that many people in the corporate world find the short-term, bottom-line mentality difficult to embrace. “These people understand that we cannot continue this cycle of profitability at all costs, especially when we are exceeding the carrying capacity of our planet.” As a result, she says “we are seeing an emerging number of companies that are focusing on ‘people/profit/planet’ as a balanced approach to their bottom line. If you embrace that approach, you see the notion of recognizing the right of our ecosystems to be healthy as deeply aligned with it.”

In addition to donating and volunteering, Milam offers some specific advice for ecological restoration, conservation planning, and regenerative design practitioners who want to get involved with the rights of nature movement:

When you are working with communities in which ecosystems are being degraded because legal systems and permit processes are not supportive of the rights of nature, raise the question, “Why not claim your right as a community to have the ecosystems be protected?” Encourage them to make decisions around what is best for the local ecosystems because that is what is best for their human community. Address it on the front end, rather than the back end. Ask these communities, “How can we rebalance the power structure so that you have the ability to make the decisions you want rather than being overridden by corporate interests?”

While the Alliance forges ahead with its working groups and International Tribunals, one major challenge remains, and it’s a behemoth: changing the dominant, anthropocentric world view to one that is ecocentric.

“Many people in the U.S. and Europe see this movement as coming from a South American, indigenous perspective…or from a liberal, progressive viewpoint,” said Milam. When she encounters such opinions, Milam often points to the Tamaqua Borough case. “The whole movement for rights of nature has its legal footing in the U.S., and early adapters to rights of nature, like those in Tamaqua, were actually very conservative communities.” 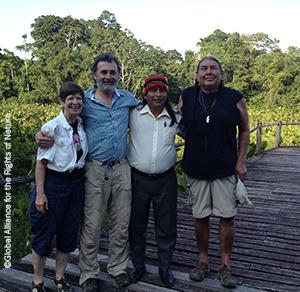 Robin, Cormac Cullinan, a member of the Achuar, and Tom Goldtooth of the Indigenous Environmental Network

Like others in the Alliance, Milam is not deterred by skepticism, resistance, or the unimaginable amount of tenacity required to push for the restructuring of entire systems of law and governance. The Alliance continues to gain on the momentum it generated for the rights of nature movement by forming five years ago.  “People ask me why I care so much about the rights of nature,” said Milam. “It’s because it’s the one movement that gives me hope.”

Where the Rubber Hits the Road: Grassroots Momentum