Senior restoration ecologist Mike Trumbauer gives us a salamander’s eye view of habitat disruption and shares thoughts about what we designers and practitioners can do about it.

Early in the spring when the sap begins to run and the ground begins to thaw, the spotted salamander (Ambystoma maculatum) begins to stir below the forest floor. Triggered by the first warm rain of the season, the spotted salamander emerges and begins his march to the same vernal pool as the generations before him. This timing is critical so he does not miss the party–the entire local subpopulation converges on this ancestral breeding pool every spring. He moves with precision, guided by olfactory, terrain, and celestial cues programmed in during his early life stages. His goal:  arrive at the pool in time to establish a prominent breeding territory. 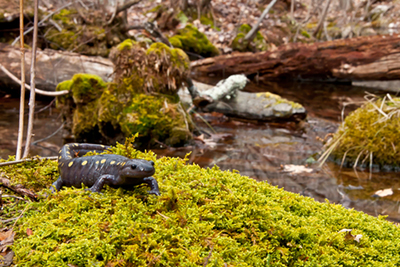 Unknown to the salamander, however, is the extent of human activity that has occurred along his route since last spring. A road is being constructed. A swath of the forest has been cleared, and the sediment control barriers now form a sort of Great Wall that diverts the salamander’s path. 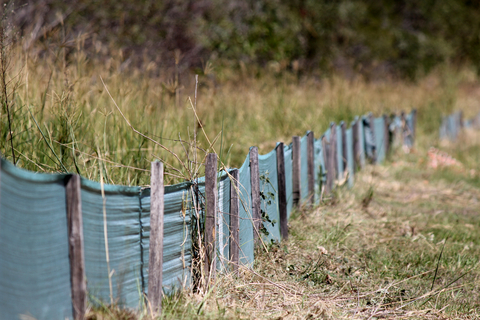 Persistent and driven to find his natal pool, he marches on along the obstacle until he finds a breach. This detour delays his arrival, and he now faces much more competition for his spot in the breeding pool. 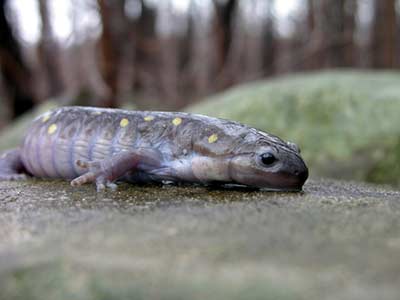 A year later, the salamander marches again. The road construction is complete and the Great Wall has been removed. In its place, though, is the road. To the salamander, it is a strange surface: dry and exposed, like a rock, but offering little in the way of cover. It is raining and with the cover of darkness in his favor, he takes a chance and crosses the road. He successfully traverses the obstacle and arrives at the pool on time.

This year, only a few of his associates are present, most of which he recognizes from the mature forest stand that was not cleaved from the breeding pool by the road construction. Having the opportunity to establish a prime territory, he and the other male salamanders await the arrival of the females. Surprisingly only a few females arrive. It appears that the rest of the population had not been so lucky. With the road crossing and the fragmentation of their habitat, half of the breeding population was wiped out. 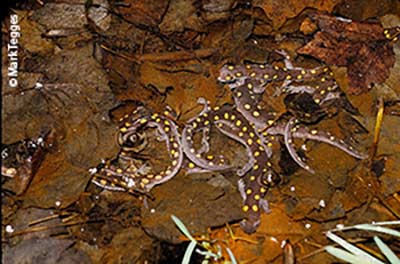 Sadly, this story and stories like it are true for countless salamander populations whose habitat—at any point in their life cycle–is degraded and fragmented by human activities. Habitat loss is a significant issue for so many animals, but for extremely sensitive creatures like salamanders, for whom migration or adaptation is not an option, it can spell extinction of a subpopulation or even an entire species.

How can we, as practitioners, better protect sensitive species like salamanders, whose role in ecosystem function is still being discovered?  Could we incorporate conservation planning into infrastructure and land development design to prevent the loss of unique, long lived subpopulations of sensitive species? We most certainly can. 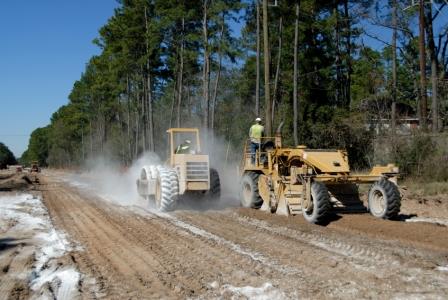 If certain natural resources, such as vernal pools, are present on the landscape, we must consider habitat connectivity. Simple solutions, such as implementing time of year restrictions or creating gaps in a silt fence by overlapping sections, could eliminate the Great Wall effect on a salamander’s breeding route. The installation of a strategically placed wildlife culverts (as simple as 12” pipe) and fencing (silt fence) to divert target species to a safe crossing and mitigate the impact of things like road construction on salamander populations. 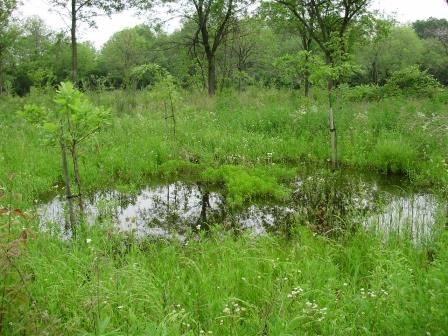 Salamanders have no voice, but we do. We in the design community need to do more than avoid and minimize impacts to regulated resources only to have project’s footprint push to the limit of that resource. We need to challenge ourselves to look beyond individual polygons on a map and consider the landscape as a whole, suggest smart design alternatives and cost effective countermeasures or ways to encroach on resources without fragmenting critical habitats. Approaches like the U.S. Forest Service’s “Stream Simulation” allow for the continuity of habitats where a road must cross a stream. Similar considerations can be made where we must impact other high value resources – mature forest, wildlife corridors, riparian area, etc.

Together we can move beyond the status quo, be the voice for other species, and help ensure that the salamander’s important annual march continues.

A Glimpse Into Salamander Diversity