In the documentary film Renewal, we witness religious people, communities, and organizations in the U.S. who are reexamining what it means to be in communion with Earth and gaining a new understanding of their role in caring for the environment.

As people involved in environmental restoration we understand the power of transformation in the landscape, even the kind which can take decades. Amidst the mounting onslaught of environmental doom and gloom, these transformations offer us hope and provide glimpses of a possible future that differs from the apocalyptic and conflict-fueled visions so common in the media these days. 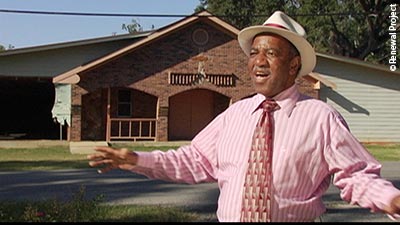 In the documentary film RENEWAL, we witness a different, but equally inspiring kind of transformation within religious people, communities, and organizations in the U.S. who are reexamining what it means to be in communion with Earth and gaining a new understanding of their role in caring for the environment. Produced in 2007 by documentary filmmakers Marty Ostrow and Terry Kay Rockefeller, RENEWAL is billed as the first feature-length documentary film to capture the vitality and diversity of religious-environmental activists. The 90-minute film is broken into eight vignettes that feature Christians, Muslims, Buddhists, Jews, Native Americans, and several interfaith organizations.

Whether you view RENEWAL in one sitting, or watch it in segments as we did at Biohabitats this fall, you will likely walk away feeling encouraged by the power of transformation—both physical and spiritual—invoked in these stories, and the progress being made by religious environmentalists within their spiritual communities.

Some of the stories show incremental progress, such as the segment about a husband/wife minister team in Highland Park, NJ who aim to lessen the environmental footprint of both their church facility and congregation through education and action. With guidance from the interfaith organization Greenfaith, the ministers lead congregants in retrofitting their church with a solar array and energy efficient lighting, conducting a trash audit, and changing church practices and operations to reduce consumption. 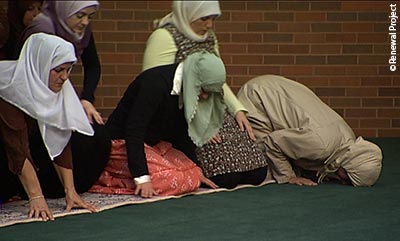 Other vignettes feature a contagion of deep, far-reaching transformation that extends across religious differences. Such is the case with the story of Taqwa, an initiative that forges bonds between Muslims in northern Illinois, urban communities, and sustainable farms. This program, coordinated by the interfaith organization Faith in Place, encourages organic farming by connecting farmers with the growing Muslim community while teaching them about Halal preparation requirements; increases Muslim demand for organic meat and produce by informing the community of the environmental, health, and spiritual benefits of eating food grown and raised organically, sustainably, and ethically; and furthers the Islamic concept of “Sadaqah” (charity) by gathering and distributing donated organic food to people in need through a mosque in Chicago’s South Side.

All of the stories convey momentum at the intersection of environmental stewardship and religion, and all offer hope when it comes to people of varying faiths taking action to care for Earth, often in dialogue with like-minded individuals of other faiths.

For this reviewer, one of the most compelling stories featured evangelical Christian leaders on an interfaith helicopter tour of mountaintop removal sites in Appalachia. The tour, organized by the grassroots organization Kentuckians for the Commonwealth, aims to help religious leaders understand what mountaintop removal is doing to the landscape in eastern Kentucky. Because mountaintop removal is difficult to see from ground level its degradation can go unnoticed by those not living immediately adjacent to mining sites. The evangelical church has not historically embraced environmentalism, so watching these tour participants take in the vast, birds-eye view of mountaintop removal, and hear them describe it using emotionally charged terms like “sin against creation” and “assault on a mountain” was powerful. 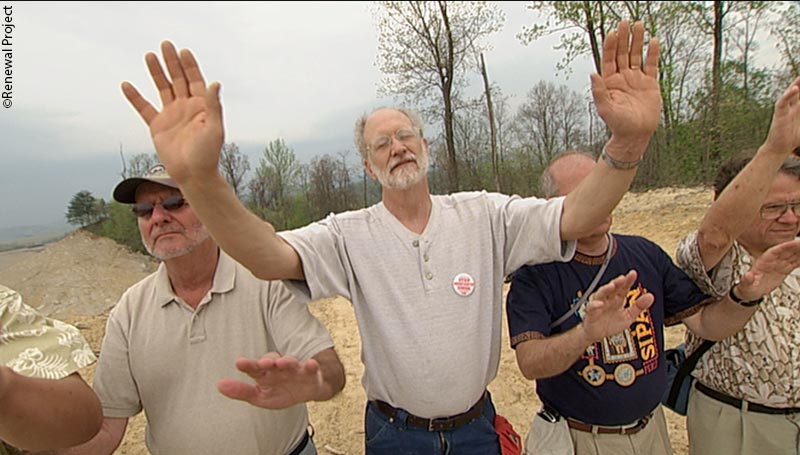 When one tour participant, a former physician turned minister, says, “As a Christian and a doctor, the first word that comes to mind is rape,” the hairs on my arm stood up. One minister wonders aloud, “Have we lost our souls?” At the end of their tour, they climb to a ridge and sing the hymn “Amazing Grace” while mining blasts boom in the background. Watching their reactions, you sense that their understanding of their personal culpability (in terms of reliance on fossil fuels) and their responsibility as religious leaders has been transformed by what they have seen. All of them leave having signed a faith statement on care of creation, a message they take back and preach to their congregations and communities.

So how did a film about religious environmentalism come to be? After producing two documentaries in the PBS scientific environmental series, Race to Save the Planet in the 1980s, producer/director Marty Ostrow became interested in exploring a different aspect of the environmental crisis: the human spiritual dimension. After attending conferences in the late 1990s which ultimately led to the creation of the Yale Forum on Religion and Ecology, Ostrow began to see increasing reports of people of various religious backgrounds re-examining their relationship with the natural world and taking action to improve the environment.

“That’s when the light bulb really turned on,” said Ostrow. “This is the way to tell the story – focus on people like you and me who are courageously making a commitment to the earth, from the deepest place within themselves.”

In 2004, a time Ostrow describes as “a period of relative national disinterest in the environment (pre-Katrina, pre-An Inconvenient Truth)” he connected with Terry Kay Rockefeller to begin creating Renewal. “We saw the promise this emerging movement has to bring about deep and lasting behavioral changes that can affect the ways we live and our impact on the earth,” he said. 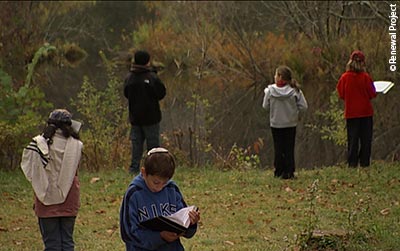 According to Ostrow, the film has been received positively by both religious and secular audiences. “Renewal has been warmly greeted by audiences from church basements to the Cathedral of Saint John the Divine,” he said, “as well as the many homes around the nation during its broadcasts via American Public Television.”

Renewal received an equally warm reception in the Biohabitats conference room, a place where—quite honestly—the subject of religion has rarely been discussed. A sampling of my colleagues’ comments:

“The traditional version of Christianity placed people above creation or nature, but the tide seems to be changing, and that is so encouraging.”

“Religion seems like a natural way to get people motivated and excited about conservation. It’s nice to see examples of this actually happening.”“The stories were very uplifting. All of the people in the film seemed like they were really getting things accomplished.”

“There’s a perceived divide between faith groups and environmentalists, but this film reveals just how incredibly powerful the connection between spirituality and environmental stewardship can be!”

Though some of the film’s stories may now seem a bit dated (they are, after all, nearly 10 years old), they all involve transformations that reinforce its title. From children at a Jewish outdoor education center who gain a new appreciation for worship simply by praying outside in nature …to a Baptist reverend who discovers that his calling as a religious leader includes addressing environmental justice and the connection between the oil industry, chemical contamination, and the health of his poor congregation…to a group of Catholics and Native Americans whose joint ritual celebrating water led to joint activism to protect water and land in the South Valley of Albuquerque.

“Many people are discovering that environmentalism is not only about endangered fish or imperiled birds or wilderness areas that most of us will never see,” said Ostrow. “It’s about our deepest connection with the entire web of life, and with our Creator. And ultimately — it’s about the choices that each of us makes, day to day.”

One choice I recommend—one that just may transform your thinking about the potential role of religion in the environmental movement—is to watch this film.