Jennifer Dowdell provides a bulletin on the actions of religious communities at the 2015 COP21 Climate Conference in Paris, France.

Breaking News! On Saturday December 12, an historic climate agreement was finalized in Paris, France at the conclusion of COP21 (the 2015 United Nations Climate Change Conference). 196 nations voted to adopt an agreement aimed at curbing global warming and slowing climate change by reducing emissions and lessening our worldwide reliance on fossil fuels. One key “win” of the agreement is the inclusion of language that the global temperature increase should be limited to 1.5 degrees C over pre-industrial levels, which is much more conservative than the limit many nations agreed to at the last major summit in 2009. 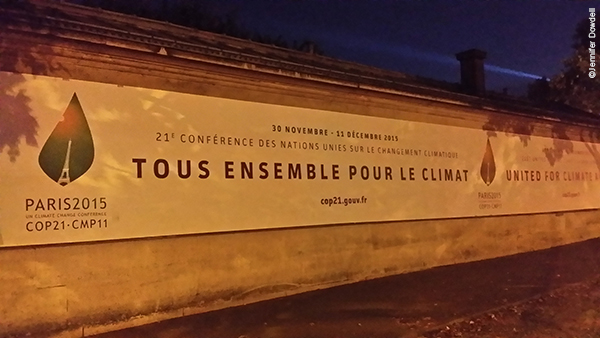 The issue of climate change has become a rallying cry among peoples of very different religious backgrounds in the run-up to the COP21 conference, and with a reported 80% of people worldwide noted as “churchgoers” the potential for this community to affect change is significant. Leaders of world religions such as Christianity, Islam, Buddhism, Hinduism and Judaism, along with many Indigenous peoples, not only made statements preceding the conference to stress the importance of addressing climate change as a moral issue, but they were very active during the conference. In fact, some of them may have helped sway a few countries to sign onto the agreement.

We may have a long way to go, now that the agreement has passed and each country has to make it a reality within their own economies, but it has been inspiring to see the solidarity demonstrated at the conference in the name of justice, environmental stewardship, and a shared responsibility to the world’s most vulnerable populations. It is equally encouraging to see the ecumenical community affecting change through awareness and moral persuasiveness.

Here’s a recap of the COP21 through the lens of the faith community’s participation in supporting a broad agenda of environmental justice and responsible stewardship for our natural resources. 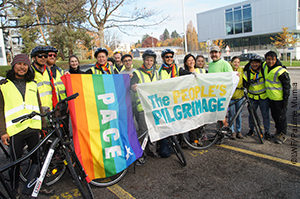 Yeb Sano and the People’s Pilgrimage

The People’s Pilgrimage started as a journey from the Philippines on Earth Day (April 21, 2015) by Yeb Sano to visit global hots spots with particularly high risks of impacts from climate change and celebrate leadership in climate change activism and resilience planning. Mr. Sano had been the head commissioner of the Philippines Climate Change Commission and became an activist after the last COP climate change meeting in 2014. He was also joined by members of Our Voices – a global interfaith climate campaign that aims to shed light on injustices associated with climate change- as well as other faith leaders and activists (like GreenFaith). Visiting sites in the Philippines, Korea, Thailand, India, Indonesia, the Great Barrier Reef, as well as sites across Africa and the Americas the pilgrimage culminated in a 60-day 1500 km (932 miles) journey on foot from Rome (the Vatican) to Paris, arriving the day before COP21 began. (For more on the People’s Pilgrimage, see Leaf Litter’sNon-Profit Spotlight)

Four days before the official kickoff of COP21 the Pope issued a directive for the climate negotiations, focusing on three goals: “lessening the impact of climate change, fighting poverty, and ensuring respect for human dignity.” 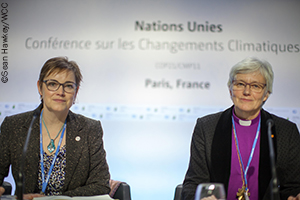 In Paris, an interfaith prayer service was held at the Cathedral of St. Denis in Paris to welcome the People’s Pilgrimage participants and open the faith community’s participation in the climate conference. There were readings and meditations from Christian, Buddhist, Muslim, and Jewish traditions.

At the Faith in Climate Justice opening event, faith campaigners (organized by the ACT Alliance, a worldwide coalition of 137 churches and affiliated organizations from over 100 countries working for sustainable change and climate justice) presented 1.8 million signatures on a petition calling on all politicians and global leaders participating in COP21 to take decisive action to curb global warming. The signatures were presented to the Chair of the UN body hosting the COP21 meetings, Christina Figueres, and the French Special Envoy for the Protection of the Planet,Nicolas Hulot. Pilgrims from the climate march across Europe also presented symbols of their journeys, including a bottle of water from the Arctic Circle.

On the eve of the COP21 the People’s March for Climate occurred, with marches taking place in cities as widespread as London, Auckland, Barcelona, Christchurch, Geneva, Helsinki, Kyoto, Johannesburg, Seoul, Sao Paulo, Mexico City, New Dehli, Ho Chi Minh, City, Dhaka, Manila, and over 200 locations in the US. Faith groups participated in many of these marches.

As a silent act of defiance in light of the cancelled demonstrations in Paris (after the terrorist attacks on 13 November) and out of respect for those who had lost their lives in that and other recent attacks and climate-related disasters, a landscape installation organized by the group Avaaz was set up overnight at the Place de la Republique. The large square in central Paris was filled with 10,000 empty shoes, including those of Pope Francis, Yeb Sano (a pair he’d worn on his pilgrimage), Cardinal Peter Turkson (president of the Pontifical Council for Justice and Peace), and retired Cardinal Claudio Hummes, president of Pan-Amazonian Church Network.

An Interfaith Dialogue was hosted by the Indonesian Pavilion at COP21 to explore faith actions associated with global climate change. It included activists and scholars from the Catholic and Buddhist faith communities, and provided the opportunity for participants to share actions and knowledge to promote further collaboration and partnership opportunities.

A panel discussion, “Faith-based Engagements in the Climate Crisis,” was held outside of the COP21 official events for faith groups and interested parties.

The World Council of Churches (WCC), who has taken part in every COP climate conference since they began in 1995, issued a statement: “we are convinced by the compelling scientific evidence presented by IPCC (Intergovernmental Panel on Climate Change), and by the witness of our churches and their constituencies across many countries already severely affected by climate change – by droughts, floods and other extreme weather events. We have to raise our voices now, and work strategically with others to slow climate change, through advocacy and actions.”

As an official delegation, WCC attended the opening session of the climate talks and participated in an interfaith panel in partnership with the International Union of Conservation of Nature (IUCN) to offer theological perspectives on the relationship between human and nature, climate and compassion.

Other faith groups officially participating in the talks included the Lutheran World Federation, ACT Alliance, the World Communion of Reformed Churches, and the Conference of European Churches. The ecumenical intention was to call for a strengthening of legally binding climate agreement, “to show intergenerational responsibility, to initiate unprecedented individual, economic and structural transformation, and to pursue climate justice.” 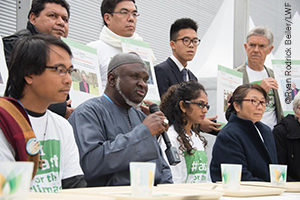 Interfaith leaders Fast for the Climate at COP21

As he has done on the first day of every month since the COP19 meeting in Warsaw in 2013, climate activist Yeb Sano Fasted for Climate. He was joined by over 200 climate activists and faith leaders including archbishops, imams, rabbis, general secretaries, and bishops in Paris, and by more than a thousand people in over 90 countries around the globe. They fasted “in solidarity with vulnerable people and to call for a just transition toward a safe climate future.” At the end of the day, the activists participated in a celebratory breaking of the fast with sustainable, local, seasonal, vegetarian food. The feast included performances from musicians and spoken word artists including the Marshallese port and COP20 speaker, Kathy Jetnil-Kijiner and Earth Guardians founder Xiuhtezcatl Martinez 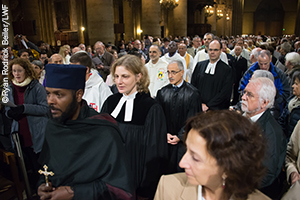 In the German pavilion at the climate talks the non-profit faith organization Bread for the World(BfW) provided a space for reflection and discussion related to loss and damage. BfW president, Rev Cornelia Fullkrug-Wietzel presented a study produced in partnership with the ACT Alliance and Germanwatch, which led to the adoption of a position paper. Fullkrug-Weitzel was quoted as saying “Apart from severe economic losses mostly affecting agriculture, water security, fisheries and coastal infrastructure, the study identified climate-induced displacement and migration and the loss of territories and cultural heritage due to sea level rise.”

The Council of Christian Churches of France hosted an ecumenical Celebration for Creationat Notre Dame Cathedral in Paris, where they issued a statement to the COP21 participants: “We call on political and economic decision makers, especially those gathered at the COP21, to take the decisions necessary to limit warming to 2°C so that the most vulnerable of our brothers and sisters and future generations do not suffer more.”

CT Now for Climate Justice activists participated in a die-in in the center of the COP21 venue, to bring attention the loss of life, opportunities, and damage facing countries that are most vulnerable to climate change and sea level rise.

The Holy See delegation (representing the Pope) joined the call for a limit on global warming to 1.5 degrees C, as the final refinements were made. The Vatican did so after a bilateral meeting with senior representatives of the delegation from the Philippines at COP21. As of the end of the day on the 10th, the language with 1.5 was still in parentheses in the official text, which meant it could still be modified or totally removed.

It was rumored that the Pope reached out to delegations that had been wavering on signing the agreement (including making a personal phone call to the president of Nicaragua.) 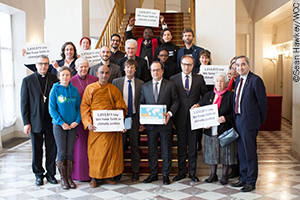 During the UN climate talks COP21 in Paris, a delegation of faith leaders and climate change activists met with President FranÃ§ois Hollande.

Faith groups presented the 1.8 million signatures for climate justice in a private ceremony to French President (and national host of COP21) Francois Hollande to close out the climate talks.