The Radical Mycology movement brings fungi to the forefront

Rectifying the neglect of a megascience
By Jessica Hardesty Norris 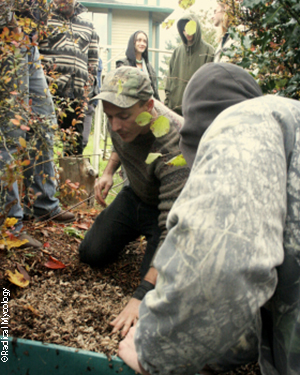 Organismal biologists often form tribes around the things they study. In large research stations for field work, I have watched the bat researchers diverge from the bird crews, entomologists from the botanists. These divisions are deeper than simply having similar tasks or schedules –crews often reflect the qualities of the studied organism. I clearly remember the swagger of the bear biologists in my graduate program. Mycologists, on the other hand, are not a swaggering kind. A colleague once told me, “It takes a subtle mind to appreciate fungi.”

Peter McCoy, a leader of the Radical Mycology movement, has just such a subtle mind. But his world of fungi is not one of fusty mycologists who praise the quiet power of organisms working silently and long to decompose mighty trees to soil, or speed the finale of the march from “dust to dust.” His world of mushrooms and hyphae and mycorrhizal associations is a boisterous interweaving of science, art, sociology, philosophy, ancient history, and religion. He explains how mushrooms move mountains. And the movement, website, workshops and book Radical Mycology support an energized, innovative, interdisciplinary approach to applying mycology to the problems facing our world today.

Peter, who has been interested in mushrooms since childhood, clearly remembers how uninterested people were in the topic. And the more he learned about fungi, the more gaps he noticed. Why weren’t mushrooms included in the NEPA process? Why are its basic questions still unanswered? Why are fungi given so few pages in standard biology texts? “We’re in a fungal world, swimming in a lack of mycological awareness,” he says.

Radical Mycology is a grassroots movement of people organized around a common purpose, though some of its aspects are not associated with a registered non-profit (there is a nonprofit associated with Radical Mycology “Convergences,” which are organized weekends of workshops, presentations, and community-building). Instead, the movement’s overall structure is characteristic of fungi and the age of the Internet. Based on a common purpose of working with fungi, groups are organized in a manner that reflects the decentralized growth, collaboration, and resilience of mycelial networks. Local groups make autonomous decisions about their work, but remain connected to and supported by the larger Radical Mycology movement. How often Radical Mycology Groups meet or how much “work” they do is entirely an internal decision made by the group’s own members. 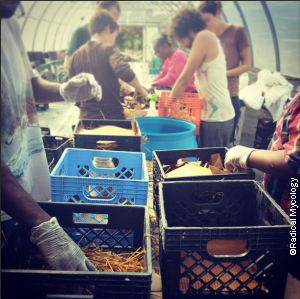 Accordingly, local groups might focus on leading mushroom walks in the woods; integrating fungi into community gardens; using grocery and restaurant waste to grow mushrooms; or really, any imaginable fungi-friendly activity. Radical Mycology, as an online community and hub for the movement, provides the resources and connections to advance an enormous variety of goals.

Today, workshops are still core to Radical Mycology. Cofounder Peter McCoy has honed his early experiences in orienting people to mushroom cultivation into a three-day course that is offered several times a year. The basic course is a broad sampling of uses and application of fungi cultivation, but there is also increasing demand for specific technical practices, such as inoculation of soils and mycoremediation of toxins. And the annual Convergences, which made its east coast debut this year, draws more people and covers a wider range of topics every year.

Responding to increasingly frequent requests, Peter now creates more targeted webinars and training for technical audiences, such as his recent soil-building webinar for The Sustainable Design Masterclass. The breadth of interest led him to undertake a book project, and the movement’s eponymous book Radical Mycology, which gives the reader a tour of lore, cultivation, application, use, scientific literature and original art around fungi, is just entering a 4th printing.

“Mycology is one of the youngest natural sciences, and correctly called a neglected megascience,” says Peter, referring to a chapter written by David Hawksworth in the book Applied Mycology. It won’t be neglected long, if Radical Mycology continues to grow as it has. The movement has dragged the study of fungi forth from the dusty retreats of academic mycological associations and emerged into a vibrant community of people who eagerly research the applications of fungi to the breadth of global programs. The people of the Radical Mycology movement may not swagger like the bear biologists, but they have tapped into an important energy and are leading the charge to bring the best fungal science forth and apply it to everyday experience.

You Can Do THAT with Fungi?