In recognizing the critical role of ecological restoration as a tool for repairing environmental impacts and enhancing human livelihoods, the United Nations has declared 2021-2030 the UN Decade on Ecosystem Restoration.

Leaders from around the world will be meeting as part of the United Nations Environment Assembly to decide how best to massively scale up the restoration of degraded and destroyed ecosystems to mitigate the impacts of climate change and to improve food security, water availability, and biodiversity. According to the UN Environment, the degradation of the environment is known to undermine the well-being of 3.2 billion people around the globe with a cost of about 10% of the worlds gross domestic product. According to the World Bank, in 2013 the world’s gross domestic products value was approximately $75.6 trillion. The UN Environment goes on to estimate that restoration of 350 million hectares (865 million acres) could generate economic value of about $9 trillion. While 350 million hectares sounds like a lot of restoration, and it is, other restoration agreements of a comparable scale are already well underway, including the Bonn Challenge, which aims to restore 350 million hectares by 2030, the Latin American Initiative 20X20  which targets the restoration of 20 million acres by 2020 (next year!), and the African Forest Landscape Restoration Initiative, which aims to bring 100 million hectares of degraded land under restoration by 2030. 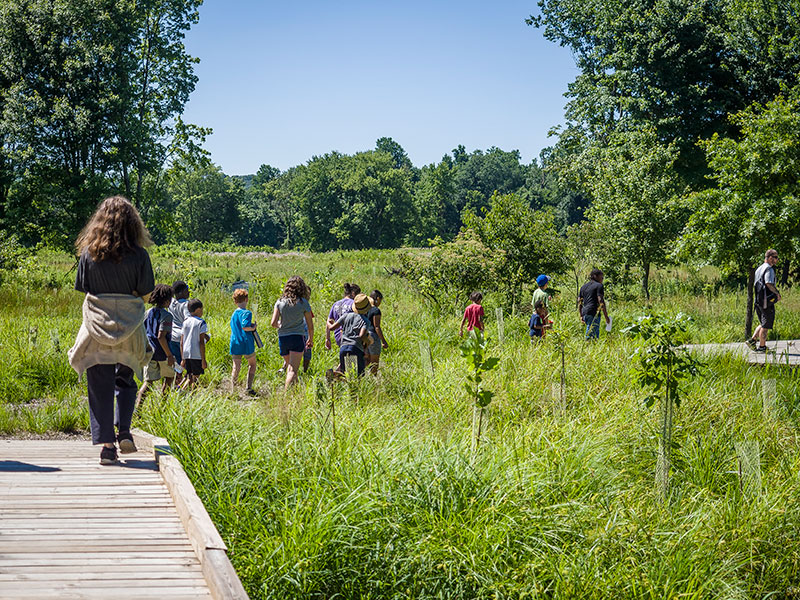 Children at the site of an ecological restoration project. ©William Wilhelm

Restoration is not only drastically needed to make up for our human impacts to the world, it is closely tied to our best possible future as thinking beings who live sustainably with a spirit of generosity in the only habitat we have. If we don’t build a restoration economy worldwide, our future and our children’s future  will be a bleak existence in a depauperate, hostile world. Rather than focusing on ‘bringing back’ historically important manufacturing and resource exploitative jobs, many visionary world leaders are emphasizing a new future, the future of the restoration economy! Thankfully, some world leaders are willing to make investments in the restoration economy to improve the conditions for billions of people and even greater numbers of our companions on this wonderful planet.