This post first appeared on The Loom House blog

As ecological engineers and designers, we see Loom House not as a “site,” but as a part of the Bainbridge Island landscape and the interconnected, ecological systems and communities that enliven it. Like all built structures, it is a place that exists within and has an impact on its unique watershed. We believe that impact can be positive. 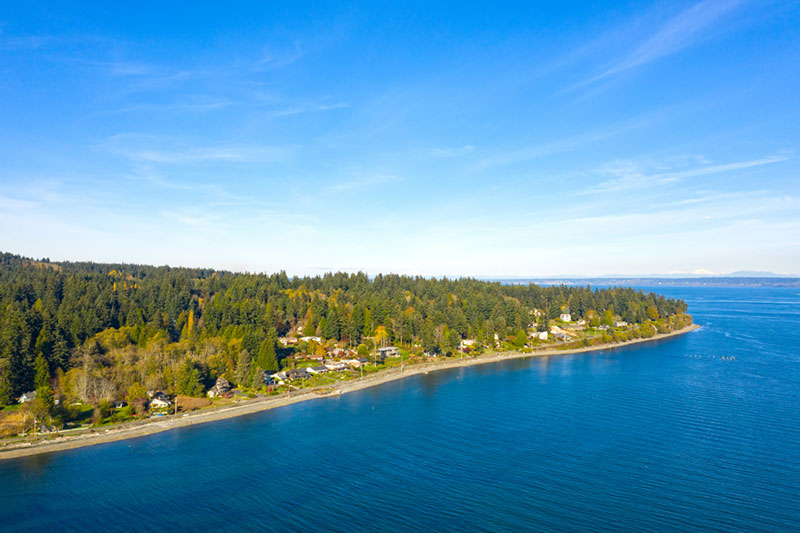 That is why, when we were approached by Todd, Karen, and the Miller Hull team about designing the water infrastructure for Loom House, we began by asking, “How can this place be an active steward of its watershed? How can it handle the water that flows onto, through, and from it in a way that improves, rather than degrades, the broader community of life here and downstream?

Answering that question requires an understanding of the Island’s landscape and of the watershed within which the Loom House sits.

From a Google Earth’s eye view, Bainbridge Island appears very green. Indeed, the island contains beautiful low marine forests full of lichens, moss, and ferns. But it is not a pristine wilderness. Although tribal communities lived on the Island for thousands of years without destroying its landscape, new settlers began clear-cutting forests in the mid-1800s to support logging, ship building, and agriculture. Human-induced changes to the landscape are particularly evident in North Eagle Harbor Watershed, the largest and most densely developed of the Island’s 12 watersheds, and the one that is home to Loom House. As its name suggests, all water from land within the watershed drains to Eagle Harbor. In the 1800s, Eagle Harbor became a major U.S. hub for ship building and the lumber industry, and during the 20thCentury, much of that lumber was treated at a creosote plant across the Harbor. Decades of dredging and legacy pollution leave a long-lasting mark on ecosystems, and the southeast point of Eagle Harbor has been a Superfund cleanup site since the 1980s. 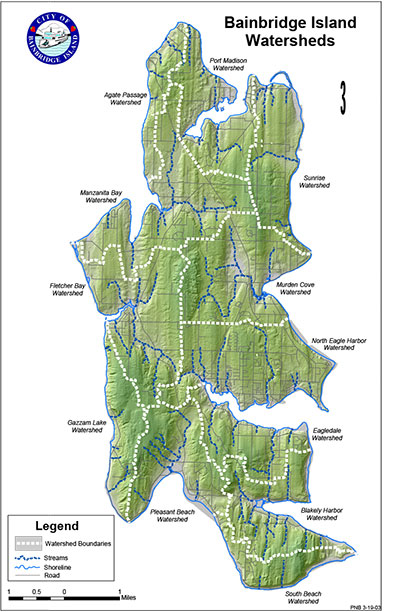 The landscape of Bainbridge Island has also been shaped by nature. During the last ice age, moving glaciers carved its deeply fluted topography, leaving behind glacial till—a mixture of highly compacted sand and gravel. It was the weight of nearly 800 feet of ice covering the island that caused the compaction. Before the forests that once covered the Eagle Harbor Watershed were clear-cut, a drop of rain that fell upon that highly compacted glacial till would be intercepted by large tree canopies, eventually reaching the forest floor. It would flow downhill and ultimately into a stream, where it would be slowed down by or retained in the vegetation and complex soil of the old growth forest (rich in organic matter), a riparian (streamside) wetland, or perhaps a marsh. From there, it would either slowly, slowly seep into and through the compacted sand and gravel and be stored as pure, fresh groundwater, or it might flow, clean and cold, into what is now the Puget Sound.

Today, without that old growth forest, and with the addition of development and its associated paved surfaces, the raindrop’s journey is quite different. Today, water falling upon that glacial till, or any paved surface on the Island, will likely flow quickly downhill, possibly carrying with it pollutants from roadways, sidewalks, parking lots, etc. This fast-moving water will find its way into storm drains or a stream, and it may come with an erosive force. From there, this water, much of which would have once slowly infiltrated and recharged the island’s groundwater, flows swiftly into the Sound, along with any pollutants and sediment it picks up along the way.

Beneath the surface of the Island is a system of aquifers—natural underground storage tanks for groundwater. Those closest to the surface are the Perched and Semi-Perched Aquifers. Just below sea level is the Sea Level Aquifer. Several hundred feet deeper is the Glaciomarine Aquifer, and just a hundred or so feet below that is the Fletcher Bay Aquifer.

Many of the island’s residents are on wells, and most of them draw water from the Perched and Semi-Perched Aquifers. Water for most people living in the North Eagle Harbor watershed comes from the Kitsap Public Utility District (KPUD) and the City of Bainbridge, and they draw it from the Fletcher Bay Aquifer. It takes water a long, long time to filter through that glacial till and make its way to the deep Fletcher Bay Aquifer, so the water drawn from it today likely drained from the surface of the Kitsap Peninsula over a thousand years ago. Let that sink in. 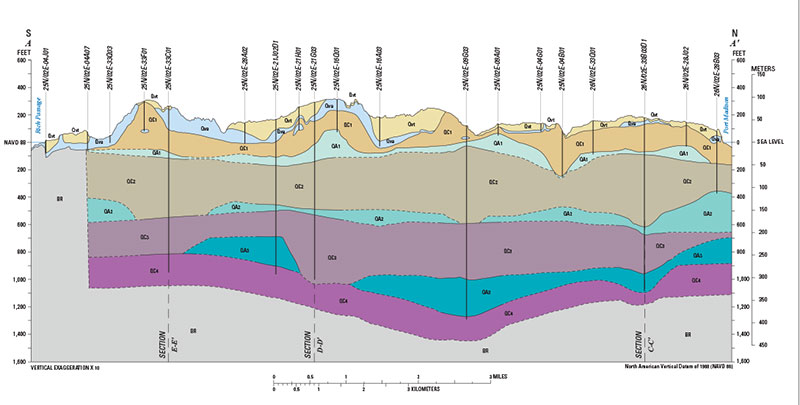 Aquifer Layers: Surface water percolates through a delicate system of aquifers and, over as many as 1,000 years, is stored for the future. Source: U.S. Geological Survey Scientific Investigations Report 2011–5021

As Todd pointed out in his April 9 post about wastewater, groundwater withdrawals are projected to increase 50% over the next 100 years. The more water levels in the Sea Level Aquifer decrease, the more vulnerable it becomes to salt water intrusion. If the aquifer becomes contaminated with saltwater, it would require an expensive treatment process to make it drinkable. Rising sea levels could promote the infiltration of salty water “pushing” the interphase with the fresh water aquifer. They could also cause  vegetation shifts at the island edge which will have a big impact on the coastal ecosystems. 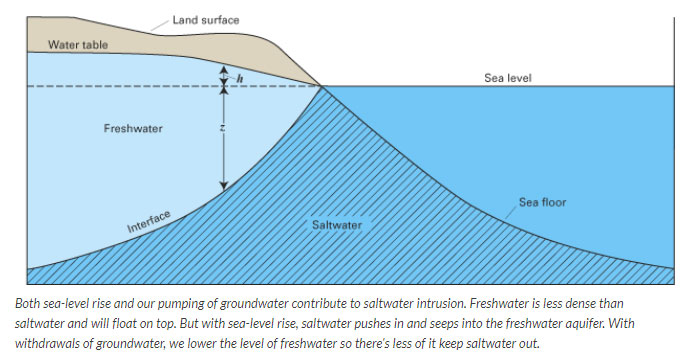 A steady supply of clean water in the Island’s aquifers and waterbodies is not only a concern for its 24,500 residents; it is critical to the survival of fish and wildlife who use the waterways in and around the island as habitat. Species like endangered Chinook salmon, which are essential to the diet of Puget Sound’s endangered orca whales. Though projects have been implemented to restore fish passage and habitat on the island, very little salmon habitat remains. According to the 2019 State of the Waters report, water temperatures in the Island’s streams have been increasing since 2012. The report cites increased development, a loss of riparian (streamside) vegetation, and stormwater as the cause.

Juan, who is a Bainbridge Island resident as well as an ecological designer, puts it pretty succinctly when he says, “Everyone is drinking from the same straw.”

So, could the water systems at Loom House actually help protect and replenish groundwater in the aquifers? Could they positively impact life on and around Bainbridge Island while enhancing resilience in the face of a growing population and uncertain climate? The answer we came to was “yes.” With the systems we created alongside Todd, Karen, Miller Hull, and the rest of the Loom House team, we believe it is doing just that.

Rainwater to Potable. Rather than becoming fast-flowing stormwater that may carry pollutants from roadways and other hard surfaces into the Island’s waterways, rainwater that falls onto the roofs of Loom House’s home and office roofs travels through a pipe to an underground cistern. From there, it gets pumped into a mechanical room inside the house, where it is filtered, disinfected, and distributed throughout the buildings, where it is used for drinking, bathing, laundry, dishwashing, and toilet flushing. Not only does this system reduce the amount of stormwater flowing into Eagle Harbor, it also reduces the need to draw water from the aquifer.

Carport Rainwater Harvesting. Rainwater is also captured from the roof of Loom House’s carport. This water is stored in two rain barrels, where it can be used to irrigate the garden. If it rains so much that the barrels become full, they will overflow into on site stormwater pipes that move the water away from the structures and then allow it to infiltrate on the property. Benefits of a system like this are two-fold: we prevent the rainwater from becoming stormwater and we reduce the need to use water from the aquifer to irrigate the garden.

Onsite Wastewater Treatment. Let’s be honest. Most people think of wastewater as, well, waste. Something gross to be discretely whisked away for someone else to deal with. But when treated on site, it can actually be a great resource-for fueling plant growth, replenishing groundwater supply, and providing non-potable water for things like irrigating gardens and landscaping. Rather than being piped away to the Bainbridge Island Wastewater Treatment Plant, all of the water from Loom House’s sinks, laundry, tubs, showers, and, yes…toilets, flows into to an underground septic tank, where solids settle. In conventional or ‘typical’ septic systems, the liquid, or “effluent” from the tank is pumped to a drain field, where it then seeps into the soil, and relies on microbes in the soil to provide additional treatment. The wastewater system at Loom House puts the effluent through an additional process after the septic tank and before it is discharged into the ground: it gets circulated through a textile filter. Microscopic organisms living on the textile filter consume the nutrients and pathogens from the effluent until it is clean enough to be released—slowly through an underwater drip irrigation system—back into the landscape. There, the odorless water is further filtered and purified by nature as it slowly seeps down through the soil and ultimately back into the groundwater. Not only does treating Loom House’s wastewater on site help replenish the Island’s aquifer system, it also lessens the burden on the Bainbridge Wastewater Treatment Plant, which will be increasingly important as the plant ages and as population increases. When aging or overburdened wastewater treatment systems break, leak, and fail, harmful bacteria and pollutants can enter local streams, wetlands, tidelands, estuaries and lagoons.

The protection of the Island’s groundwater and surface water becomes even more critical when we think about the fact the Island contains a lot of forest, lies on a seismic fault line, and is surrounded by salt water that is projected to rise as much as 56 inches in some places by 2100. There is also only one bridge leading to the mainland. A major earthquake, a multi-year drought followed by a forest fire, or an inundation of saltwater are all viable threats to the island’s water supply.  Though geohydrologic models indicate that there is no reason to panic, one thing is clear: we need to be very intelligent in the way we use and manage water on Bainbridge Island.

The passing of Ordinance 2019-05, which allows a limited number of systems like the wastewater treatment system at the Loom House, tells us that the City and the people of Bainbridge Island are on the right path. The water solutions at the Loom House are wonderful examples of strategies people can support or possibly implement to help address some of the ecological and water-related issues on Bainbridge Island and places facing similar challenges.

Bainbridge Island’s waters have suffered in the past from human “development.” With its water systems and the other elements that make it a Living Building, Loom House presents a different kind of development—one that is less about constructing and more about evolving into a place that is a beautiful and active agent in the healing and nurturing of its landscape.

Learn more about the integrated water strategies at the Loom House.