As the first stream restoration project in Maryland to only use wood harvested on site, Bacon Ridge is somewhat of a marvel in the Chesapeake area.

Pigs have made a reputation for themselves the world over, but one Maryland ecosystem in particular can thank them for its name and its degradation. Turns out certain agricultural practices, like letting domestic pigs roam free to dig for roots and other buried foods, do not necessarily equate to a healthy environment. And okay, the pigs aren’t fully to blame, but they started it.

Less than 30 miles from Washington DC and nestled between the large populations of Baltimore and Annapolis, Bacon Ridge encompasses 630 acres of forest and wetlands, with Bacon Ridge Branch, a headwater to the South River, flowing through its center. While land protection efforts by Anne Arundel County, the Maryland Environmental Trust, and the Scenic Rivers Land Trust, have been strong in this watershed over the last 20 years, ecosystem damage was already well underway. Scenic Rivers Land Trust board member, Kirk Mantay, acknowledges that, “While the average person standing in the beautiful trees, watching the water trickling in a stream would be hard-pressed to identify a problem here, we know that this ecosystem is in a steep and rapid decline.” A restoration ecologist, professional wetland scientist, and the Director of Operations for GreenTrust Alliance, Kirk knows what he’s talking about.

The pigs’ rooting caused extreme instability in the soil, which along with deforestation from massive timbering operations, resulted in a devastating loss of several vertical feet of topsoil. Bacon Ridge had developed a scar that never fully healed. Today there are over 180 active headcuts throughout Bacon Ridge Branch, evidence that the channel is severely eroded. Without restoration, these headcuts will only get worse, completely draining the surrounding wetlands. Fortunately, much of the land has been preserved and is still forested, and now a huge group of dedicated people is working together to turn back time on Bacon Ridge’s ecosystem.

The restoration process really started moving when Rich Mason, a neighbor to the stream, and one of the US Fish and Wildlife Service’s experts on ecosystem restoration in the Chesapeake Bay area, noticed its sad state. The USFWS turned to Arundel Rivers Federation, stewards of the larger South River watershed, for help. Immediately stepping up, Arundel Rivers pursued grants from the Maryland Department of Natural Resources (DNR) and the Chesapeake Bay Trust to restore 4,300 feet of the actively eroding channel. While they received a grant, it was only enough to fund the restoration of 700 feet of the stream using the typical all-rock approach. That’s when Biohabitats suggested using only wood, harvested on site, to not only enable the team to restore the entire 4,300-foot section, but to do it under budget. Arundel Rivers was not very familiar with the use of wood in stream restoration, according to Jennifer Carr, Director of Grants and Operations, but the novelty and price drop were cause for enthusiasm, and Biohabitats was welcomed to the team. 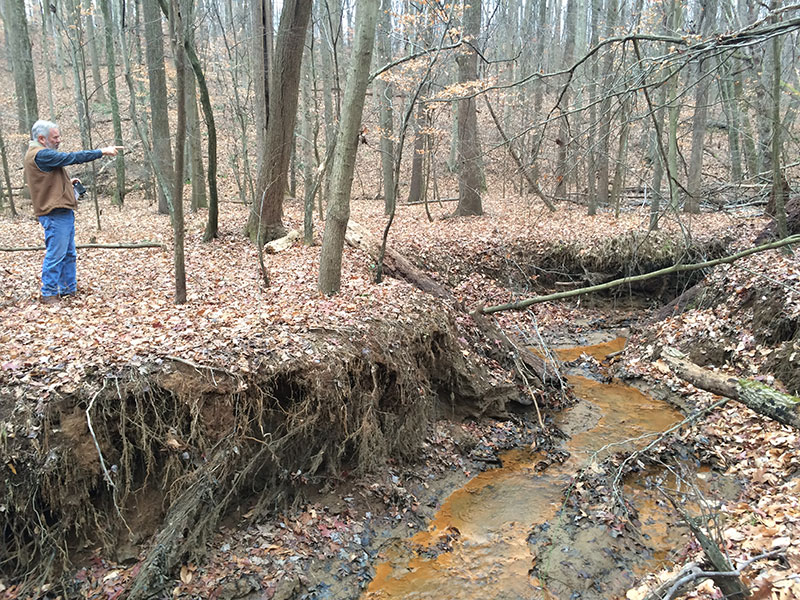 While Biohabitats had experience using large wood for river restoration in the Pacific Northwest, introducing this approach in the Chesapeake area had been a long time coming. The use of wood has not been possible in the past because the site, the client, and the stars need to be perfectly aligned. If sewers or houses are too close to banks, streams cannot be restored to natural function and clients will usually opt for a rock lined channel to prevent erosion. Historically, though, there was never any rock in coastal plain streams like Bacon Ridge, and wood and tree roots were the only materials introducing structure to streams. Biohabitats’ seemingly new approach of using only onsite wood is really just an imitation of nature.

One of the fundamental benefits of this approach according to Joe Berg, Biohabitats Senior Ecologist and Principal of the Bacon Ridge project, is the sustainable nature. When rock is used in stream restoration, energy is spent during the mining process and mined rock is then transported on trucks, requiring the construction of an onsite access road, all of which results in a large carbon footprint. Using trees and materials from the site removes all of these issues from the equation, decreasing the carbon footprint. Carr agrees that sustainability is the most rewarding part of this project. While most of her team was looking forward to something new in the area, there was definitely some push back and concern in the beginning. Berg understood the skepticism. “Most clients want engineering certainty,” he said, “and the use of wood requires a willingness to let nature take the lead.” To help address concerns, Biohabitats led members of USFWS, along with the client and other stakeholders on a field trip.

From the start, there was some apprehension about the erosion rates of soils with the use of wood. When a stream is lined with rock it is designed to protect the bank, a permanent a barrier between the water and the bank. Hard surfaces that reflect energy, rock-lined channels make the water faster and more erosive, ruining downstream function over time. Berg assuaged concerns when he explained, that while there is absolutely more exposure to the soils when building with logs, wood absorbs energy and slows the flow, resulting in a non-erosive waterway. This improves water quality and gives the water level time to rise and spread out onto the floodplain, dropping sediments and nutrients as it goes, and enhancing wetland habitat and the quality of life for plants and animals. 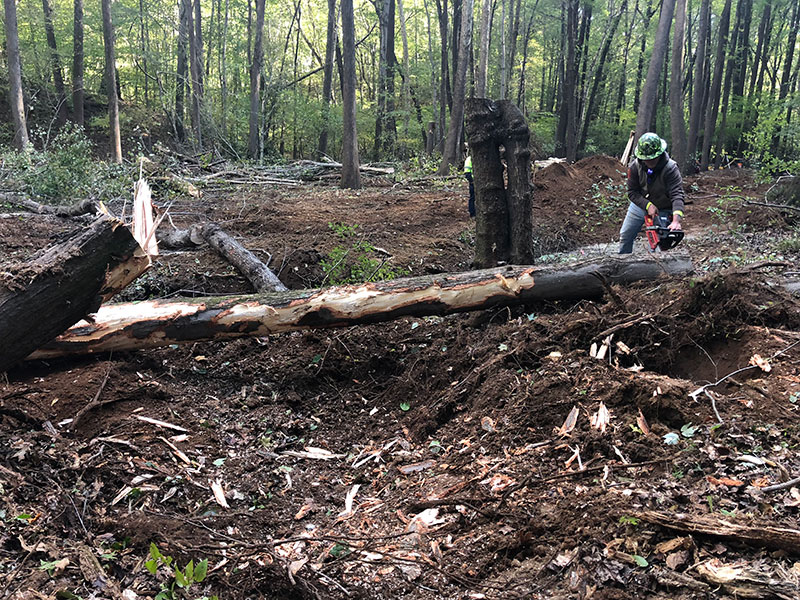 Harvesting red maple for use in a structure

Another concern stakeholders had on the trip was log decay, because if wood rots it can be released into the stream, causing obstructions and flooding. Bacon Ridge’s forest is made up of mostly lower density trees like red maple, sweet gum and sycamore, none of which is known for its resistance to decay. One stakeholder had the idea that white oak, a much denser tree, should be transported in from the eastern shore of the Chesapeake Bay, until Berg pointed out that saturation is a more important factor than density when considering log decay. As long as soils and logs remain wet there is not enough oxygen to cause decay. The team assured stakeholders that restoration will reconnect the channel to the floodplain, saturating soils to the surface, and making the species on site last just as long as white oak or even rock. 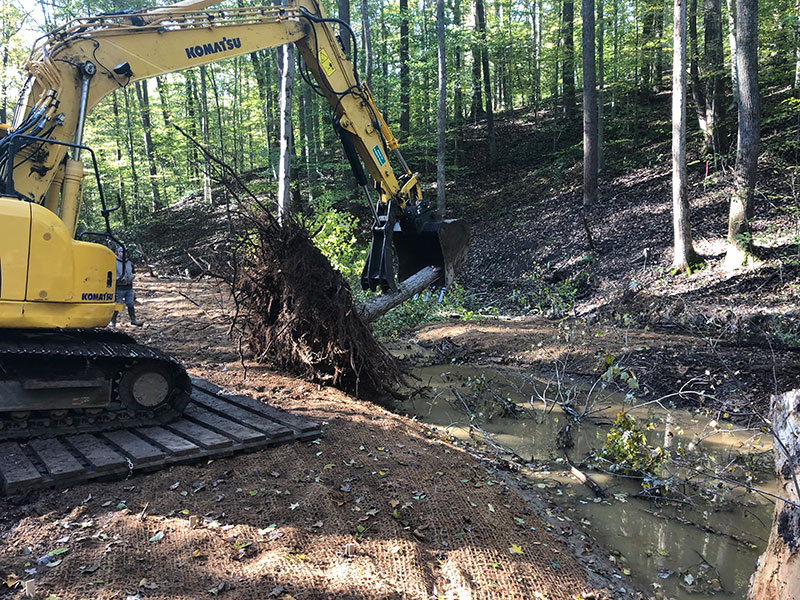 Placing a root wad to raise the stream invert

Not a concern, but an extra plus that Biohabitats shared with stakeholders, was wood’s ability to reinforce itself. Once rock is taken to a coastal plain area, that’s it, there’s no more rock to be made and as soon as there’s a big storm that rock can be removed. But with Bacon Ridge, the trees will continue to grow and fall, along with leaves and limbs, strengthening structures. Anywhere seeds get established, they will introduce structure to the stream banks and sediment deposits, increasing the site’s resistance to erosion. Biohabitats took this a step further by planning to incorporate a redundant system of structures. With this, no one structure is indispensable, and each structure reinforces those up and downstream, assuring long-term performance and effectiveness. Satisfying another request, the structures would also be made impermeable to flow so the stream can fill up and flow over them, creating an environment that supports fish movement. 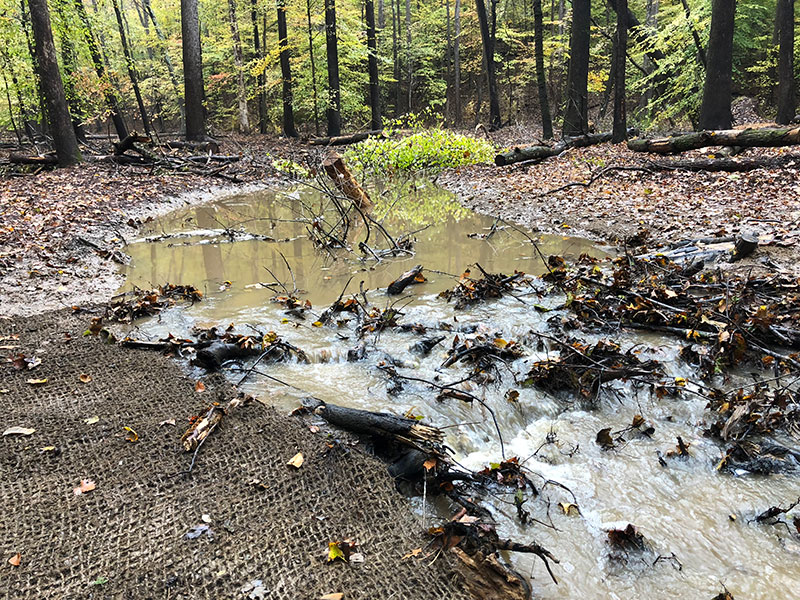 In the end, Biohabitats was able to address all County and regulatory concerns up front, greatly facilitating the permitting process. Once all permits were issued, Biohabitats worked with long-time collaborators, Meadville Land Service, to implement construction. Construction on the project has just been completed *cheers* but there are no plans to stop there. The Bacon Ridge project has sparked the restoration of another stretch of Bacon Ridge Branch, just five miles downstream at a site known as Elks Camp Barrett. Working with GreenVest, a restoration/mitigation banking firm, the Maryland State Highway Administration initiated the restoration of over three miles of Bacon Ridge Branch, an area four times as large as the original site. With Biohabitats as the designer and Environmental Quality Resources (EQR) as the contractor, the team proposed the same all wood approach, and State Highway accepted. The success, low cost, and support of the first project all acted as drivers in this decision. Construction on the second project will start in June of 2019, but if you thought Bacon Ridge’s reach stopped there, you were wrong. 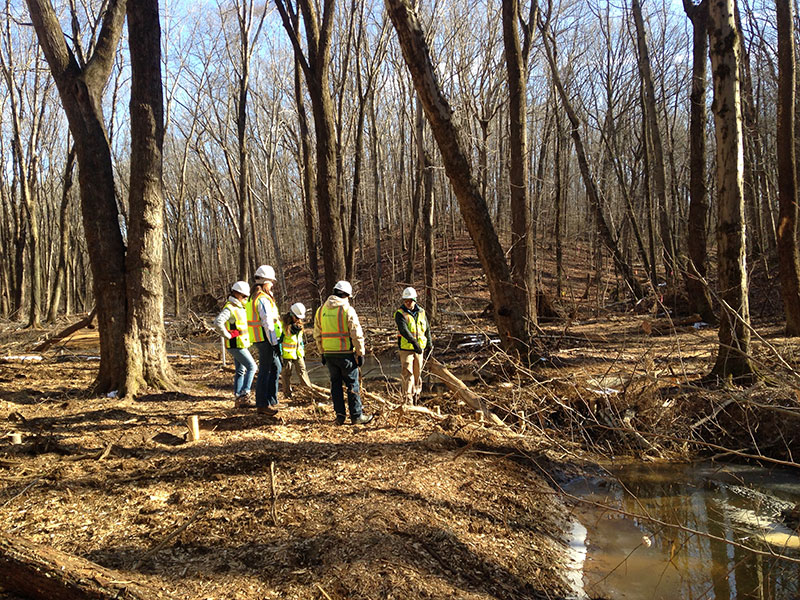 Sometimes seeing really is believing. Biohabitats already has led several tours of the site, with plans to do more, including a field trip associated with the Mid-Atlantic Stream Restoration Conference held this fall. Carr and Berg agree that there is a lot of intrigue surrounding the project, especially amongst resource and regulatory agencies and the consulting community, and everyone is excited to dig deep and learn more.

Who wooda thought that wood could be such a rock star? 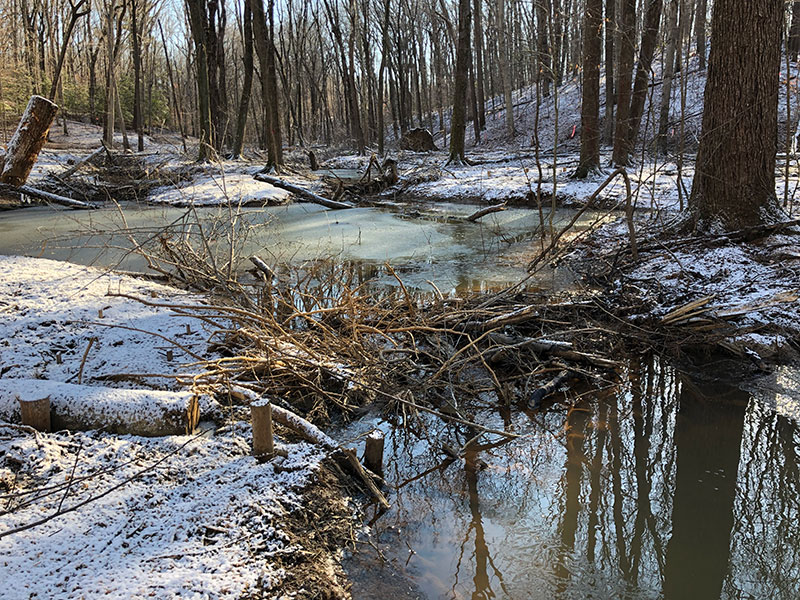