Step aside, Prince Charming. When it comes to the Cinderella of ecosystems in Yorkshire, there’s a new hero in town.

The tale of Cinderella is one widely known and loved. Although beautiful, unique, and worthy of admiration, Cinderella is mistreated and ignored until her Prince Charming comes to the rescue and finally gives her the love and attention she deserves. Though they may not come to mind when watching the Disney classic, peatlands have a lot in common with Cinderella. Vastly important, but completely ignored, peatlands have been drained, overgrazed, and burned for centuries. Dubbing them “The Cinderella Habitat,” a non-profit by the name of Yorkshire Peat Partnership has vowed to restore peatlands to their former glory. Looks like peatlands have finally met their Prince Charming!

To the average person, the United Kingdom’s year-round rain and high cloud cover may not sound like paradise. But peatlands thrive in this climate, especially the aptly named blanket bog which cloaks large expanses of rolling hills in areas of high rainfall. In fact, a whopping 13 percent of the world’s blanket bog is found in the UK. The conditions are so luxurious that, unlike many other areas across the globe, peatlands living in them have the unique ability to grow on steep slopes. As some of the UK’s wildest places, peatlands not only serve as a great way for people to get out and enjoy nature, but they also make up 72.5 percent of the storage capacity in UK reservoirs and can store twice the amount of carbon as UK forests. Fun fact: if all the peatlands in the UK were in perfect condition they could store 400,000 tons of carbon every year. That’s the equivalent of taking 84,000 cars off the road! Unfortunately, most UK peatlands are no longer peat forming and 80 percent are currently in poor condition. The county of Yorkshire alone contains about 70,000 hectares of peatlands, most of which are heavily degraded, making it a landscape worthy of some princely protection. 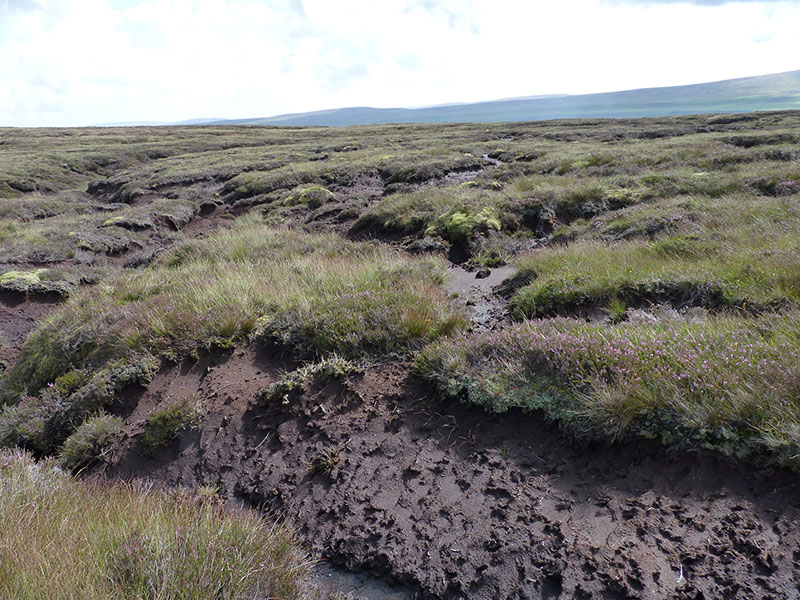 Years before Yorkshire Peat Partnership (YPP) was even a concept, Yorkshire’s sheer volume of peatlands, along with the utter destruction of them, spurred conversations and meetings among government agencies, charities, and landowners. After years of the same conversations with no result, Dr. Tim Thom, program manager of YPP, decided enough was enough. He had some money left over from a project he had just finished with the Yorkshire Dales National Park, and he took matters into his own hands. With the same level of commitment required as in a search for true love, and with help from the Yorkshire Wildlife Trust, Dr. Thom created something wonderful: a non-profit that strives to restore and conserve peatlands for future generations and the world. And with that, YPP, a genuine partnership managed by the Yorkshire Wildlife Trust and supported by government agencies, landowning associations, farming networks, and more, was born in 2008. Peatlands have finally found the family they deserve, and its devoted members are working together to give peatlands the best life they can! 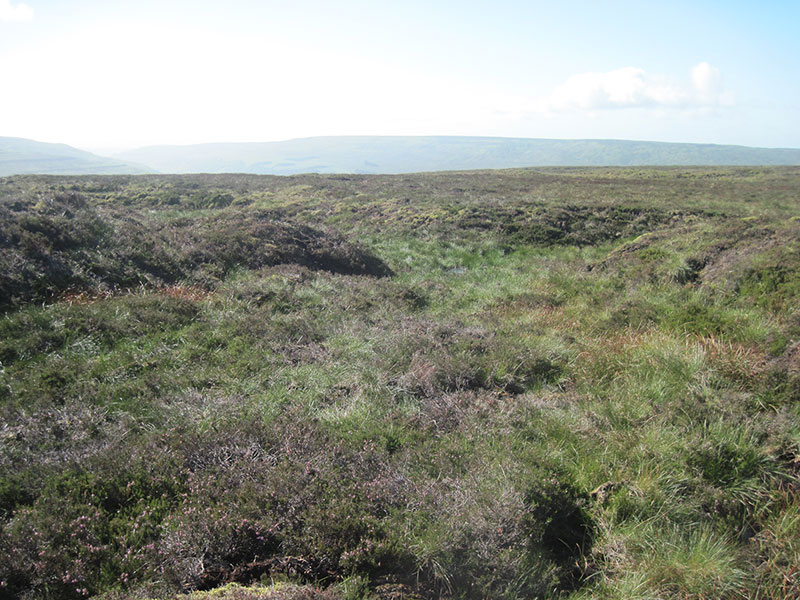 Dr. Thom describes the peatlands of Yorkshire as, “unique places, they give us a sense of space and a feeling of wildness even though they are actually managed habitats.” Unfortunately, they are “probably some of the most eroding, damaged peatlands in the world.” Most of Yorkshire’s peatlands are crossed with drainage channels called grips, originally encouraged by the government in hopes of making the land more productive for agriculture and development. Instead, they have only caused the peatlands to erode and dry out, leaving them vulnerable to fires and deterioration. That’s not the only thing they have to suffer through, as peat harvesting is also a huge issue. Gardening is a very popular past time in the UK and the horticulture industry relies heavily on harvested peat to grow their plants, but when peat is removed from the landscape it can cause vast and irreversible damage. If YPP and organizations like them had not ridden in on their valiant steeds to save the day, many people might have never had the chance to experience the true wonder of a natural peatland before they became so deteriorated that they were past recognition.

When the organization was founded, YPP was remarkable in that it was one of the first non-governmental organizations to work on large-scale peatland restoration. While there were smaller wildlife trusts doing peatland restoration around the UK, very few non-governmental organizations had access to the resources needed to restore peatlands so extensively. Some bling from the king was almost necessary to get the job done, and at that time most of the large projects from the UK and Europe were backed by the government. Funding has been YPP’s biggest challenge as well, but they have become experts at gathering funds from many different government agencies and individual philanthropists whose goals correlate with the perks of fully functioning peatlands. This money goes to the restoration process, whereas their core funding comes from membership fees and is used for computers, cars, fuel, and staff costs. These costs are all essential for proper performance, but not the easiest things to fundraise for and without membership fees, YPP simply would not have the funds necessary to be the hero of Yorkshire’s peatlands.

“…still lots to do but we’re really, really pleased with our successes so far.”

YPP has made a lot of headway over the years when it comes to their goals. Since 2008 they have carried out restoration on around 30,000 hectares, almost half of all the degraded peatlands in Yorkshire, which just about hits the mark for their original goal. The successes have also been immense, as they have blocked over 1,700 kilometers of grips, which helped restore the water table and prevents further erosion, as well as surveyed and drawn up plans for the restoration of almost all of Yorkshire’s remaining peatlands. “I kind of say we’ve started the restoration because what we find with peatland restoration work is that we need to do an initial phase, and then go back again to the same sites in a few years, just to do extra things like planting sphagnum and cotton grasses. And I think that will be a big part of our next phase as well. So still lots to do but we’re really, really pleased with our successes so far,” says Dr. Thom. One year after work at a site is completed YPP goes back to assess the results, before returning every two years to do condition assessments. Commitment to a princess, or rather, a peatland, isn’t a one-and-done job; it takes years of dedication from everyone involved. Now that YPP is established they can also guide neighboring counties in peatland restoration. 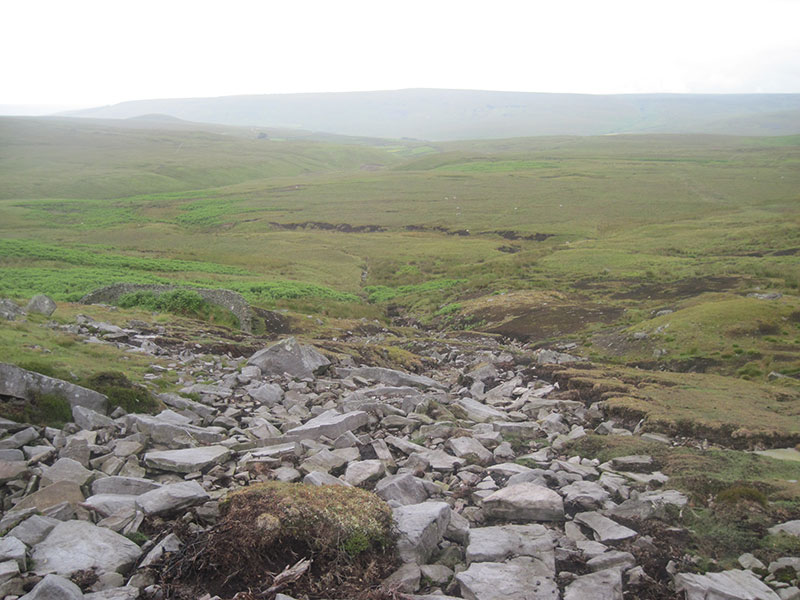 In addition to restoration, YPP is expanding their work into research to better understand the role peatland restoration plays in reducing carbon emissions, the effect peat has on water quality, and the best techniques for re-establishing vegetation on restored peatlands. YPP’s commitment to peatland restoration is shown through the devotion and vision of the entire team. This is clearly evident in their work, but also in the recognition they have received. On June 21st of this year, YPP’s efforts to reintroduce vital peat forming sphagnum mosses to damaged peatlands, and their unprecedented use of unmanned aerial vehicles for monitoring the health of peatlands earned them an ‘Innovation Award’ from the Chartered Institute of Ecology and Environmental Management Award Ceremony held in London. YPP has actually reached a national record for peatland surveys, using these techniques to monitor over 7,900 hectares of peatland. Prince Charming had to try the glass slipper on every maiden in the kingdom before he found Cinderella, and similarly, YPP will not stop until they have found the best techniques for restoring peatlands. 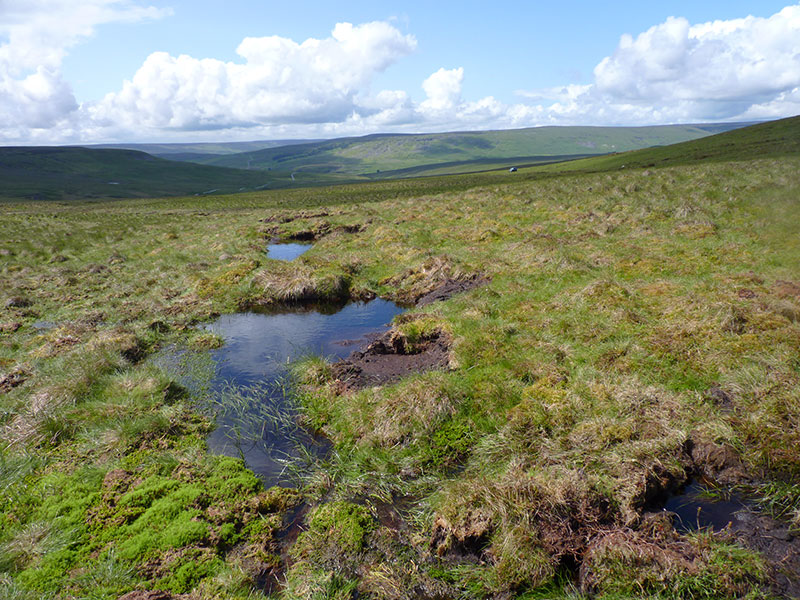 The Yorkshire Wildlife Trust was established by volunteers in 1949, when people returned from the war and realized that the UK had beautiful environments that needed to be protected for future generations. Unfortunately, as time went on the population of the UK became increasingly dense, causing serious issues for the wildlife. Dr. Thom credits television programming and the campaigns of environmental organizations with sparking a resurgence in public support for habitat restoration. “People have started to really regret that loss of species and habitats and want to do something practical about it.” Basically launching into battle, people willingly give up both time and money to save peatlands. “We get some very, very dedicated volunteers with a real desire to reverse that change.”

While YPP might not be a real knight in shining armor, charging into the fray, the work they do can be very technical and requires heavy machinery, making it harder for people to volunteer on the ground. But that has been changing in the last two to three years as the cavalry is retracted, the gardening begins, and more volunteers are able to come in and do the physical planting of the peatlands. Although, they have also found volunteers to come in to the office and do mapping work at the computers, a surprise to Dr. Thom, who says, “We normally assume that volunteers are going to want to get out there with their wellington boots and actually do something physical. But we’ve certainly had a lot that have supported our office work as well.” Recruiting trainees to come in for a year and learn about the work they are doing has been another way to spread the love and knowledge of peatland restoration.

Since YPP was established there has been a large shift in public awareness and involvement in the UK. Just as the Kingdom knew nothing of Cinderella and her glass slipper until she disappeared from the ball, UK citizens did not truly realize the importance of peatlands until they were almost destroyed. Recent flooding has been a catalyst in people finally understanding the role peatlands play in reducing these types of natural disasters, causing them to lobby the government for peatland restoration. As a result, YPP has just received funding directly from the government for the first time. This funding will be magical when it comes to their continued restoration of peatlands. 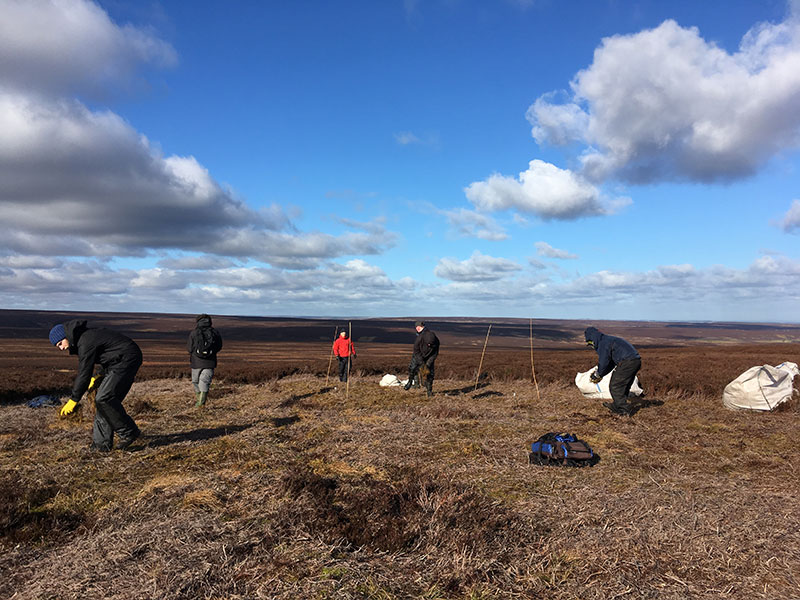 How can people support YPP and other organizations dedicated to peatland restoration? Dr. Thom recommends membership, as money from members is vital to the work of such organizations. He also encourages gardeners to go peat-free, particularly in the UK, where there is so little left to harvest. In general, he advises to just do whatever you can to try and prevent any sort of degradation because it is can result in a total and irreparable loss of habitat, and “if there is a peat restoration project on your doorstep then there are opportunities to volunteer.” Even though peatlands are the YPP’s main princess, YPP urges people to help protect and restore all types of natural habitats anyway they can.

But, Dr. Thom adds, “If anybody is visiting the UK then well get out onto the hills of the Pennines of Yorkshire and go and explore, explore the bogs out here. They’re not the easiest to get to but there are road networks and public footpaths that go through areas that people can access.” YPP has been working hard to prevent these amazing environments from disappearing completely. Don’t let a little thing like accessibility stop you!

The Cinderella story has endured for generations, and through supporting organizations like YPP, peatlands can last even longer. Together we can finally give peatlands their ‘Happily Ever After.’

To learn more about the Yorkshire Peat Partnership, please visit their web site.