If you were a shorebird or, say, an anadromous fish, no one would have to sell you on the benefits of restoring degraded coastal habitat.

And for people who understand that clean water, storm surge protection, carbon sequestration, and other ecosystem services are provided by functioning marshes, mangroves, seagrass beds, reefs and dunes, the plus side of coastal habitat restoration is clear. 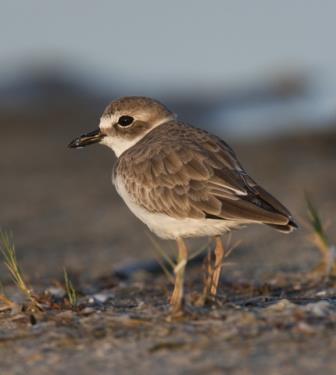 But what about people who do not understand ecology or appreciate the plight of an anadromous fish? Let’s say instead of a shorebird, you are a policy maker in a coastal municipality during an economic downturn, and your primary concern is keeping your constituents employed and ensuring the long-term economic stability of your community?  Can coastal habitat restoration be good news for you?

You bet it can. At least that is what the authors of the 2013 study “Investing in nature: Restoring coastal habitat blue infrastructure and green job creation” (Marine Policy 2013), would say. These social and natural scientists studied the socioeconomic impacts of coastal habitat restoration projects funded through the American Recovery and Reinvestment Act (ARRA) of 2009 and managed by the National Oceanic and Atmospheric Administration (NOAA). 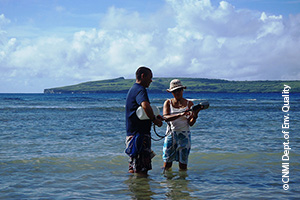 Water quality testing related to upland habitat restoration to protect reefs along the island of Saipan.

Intended to jump start a flailing U.S. economy, the Recovery Act provided many federal agencies with a swift injection of funding for much needed work. For NOAA, this meant $167 million specifically coastal habitat restoration. The agency selected 50 projects from a pool of over 840.  They ranged from restoring upland habitat to benefit coral reefs in the Northern Mariana Islands to restoring fish passage and salmon habitat in Alaska’s Kenai Peninsula, to restoring wetlands and removing historic lumber mill debris along the coast of Lake Michigan. Many of these projects were implemented through partnerships with organizations like The Nature Conservancy.

So just how effective were these and other ARRA projects in terms of green jobs creation? The researchers concluded that they generated 17 jobs per million U.S. dollars spent. To some, at first glance, that may seem like an unimpressive ratio, but the researchers say that number is in line with other conservation industries and much higher than traditional industries. With oil and gas development, for example, a $1 million investment yields an average of just 5.2 jobs. The researchers also found that for every federal dollar invested in coastal restoration, the return is $1.60. 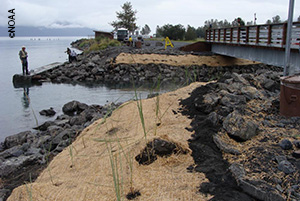 The findings of a separate study (Conathan, Buchanan, & Polefka 2014) which examined ongoing economic contributions provided by three of the ARRA restoration sites, suggests that the return on investment in coastal habitat restoration can actually be much higher. This study, conducted by the Center for American Progress and Oxfam America, suggests that every dollar invested in restoration returns more than $15 in net economic benefits

But before delving further into these socioeconomic benefits of coastal habitat restoration, it is important to think about the socioeconomic impacts of the loss of that habitat in the first place—something the researchers say is difficult to quantify.

“It can be very hard to pin down the ‘economic cost’ of habitat loss,” said Peter Edwards, economist and social science Coordinator for NOAA’s Coral Reef Conservation Program and co-author of the 2013 study. 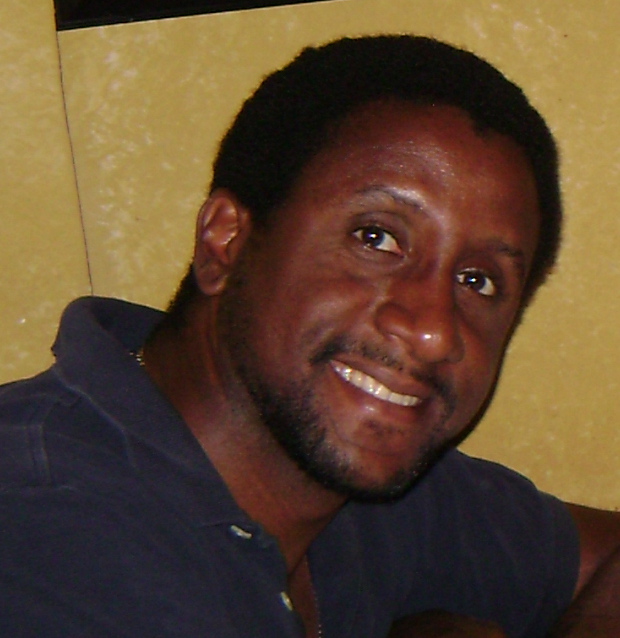 “Some of the losses have been occurring for centuries, and in many cases, it’s not possible to go back hundreds of years to truly account for the associated economic loss.” According to Edwards, the major economic losses associated with coast habitat degradation are usually related to damage to fisheries, infrastructure, property, and real estate values.

Study co-author Ariana Sutton-Grier, a member of the research faculty at the University of Maryland and Ecosystem Science Adviser to NOAA, adds that for many coastal areas, tourism makes up a large component of the economy. “Restaurants, hotels, and all of the industries associated with activities people choose to do when they vacation in a coastal environment lose when we lose coastal ecosystems,” she said.

There are also the costs of the lost services a degraded ecosystem can no longer provide—services such as water filtration, erosion control, carbon sequestration, etc. The study’s finding of a $1.60 return on a $1 investment in coastal habitat restoration does not include the value of these services. In the past, most of NOAA’s efforts to assign such value have primarily been associated with damage assessment. According to Edwards, however, this is changing, and the agency is now partnering with other federal agencies in studies of the economic valuations of ecosystem services provided through the ARRA restoration projects and other federal investments in conservation.

But Sutton-Grier cautions against relying solely only on dollars when examining value. “There are times when it is very important to go all the way to putting a dollar value to ecosystem services benefits,” she said, “but NOAA’s perspective on this is broader than that. Sometimes you don’t actually have to go all the way to monetization. You can do valuation in the sense of recognizing that a service is important to society and then communicating about why that service is important.” 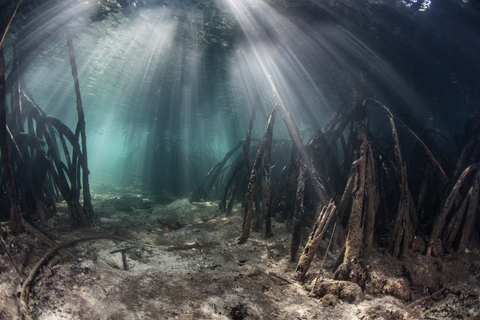 An example of this type of valuation can be seen in the work NOAA is doing related to coastal blue carbon, a term referring to the carbon capturing power of coastal ecosystems such as salt marshes, mangroves, and seagrass beds. According to Sutton-Grier, these systems sequester carbon at rates that are at least ten times higher than the other forested ecosystems we tend to think of as natural carbon sinks, like tropical or temperate forests.

“They store carbon that tends to be very old,” explains Sutton-Grier, and they store it for long periods of time.” Because the soils in these systems can be several meters deep, and anaerobic, the degradation of the carbon they store, which can be hundreds or thousands of years old, is greatly slowed.

“Do we want to put a dollar value on that?” asks Sutton-Grier. “Sometimes putting a dollar value on something undermines its true value because society hasn’t fully recognized how much value we should be placing on it.” That is why, in communicating about blue carbon, she prefers to focus on the importance of the service, rather than it’s monetary value at current market rates. This approach to valuation seems to be working.

According to Sutton-Grier, this approach has been successful in furthering funding and support of coastal conservation and restoration. “Five years ago, neither NOAA nor any other federal agency was talking about coastal blue carbon. Today, it is in the priority agenda that came out from the White House last fall [Enhancing the Climate Resilience of America’s Natural Resources],” she said.

“For our country to not just say forests are impressive natural sinks but also soils, grasslands, wetlands, and coastal areas,” said Sutton-Grier, “is a huge step forward.” 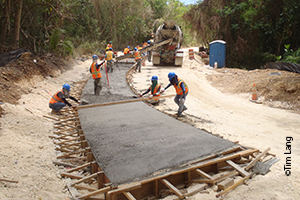 While we wait for the rest of the world to catch on to any form of ecosystem valuation, we can, in looking at the NOAA ARRA projects, provide evidence of power of coastal habitat restoration to generate jobs.

Edwards, Sutton-Grier, and their colleagues found that jobs generated by habitat restoration fell into three categories: direct, indirect, and induced. Direct jobs are those for which employees use their skills to restore damaged wetlands, shellfish beds, coral reefs and reopen fish passages. Indirect jobs are generated by the industries that supply materials or services that support projects. This would include jobs like consulting engineers, or suppliers of native nursery plants. All of those newly employed people are going to spend money on local goods and services, and that is where induced jobs come into the picture. A local restaurant, for example, may need to hire more wait staff to handle the increase in customers.

Some types of restoration—those that involve more “boots on the ground,” such as invasive species removal–generate more short-term jobs as opposed to more technical projects, like oyster restoration, which involve more engineers. 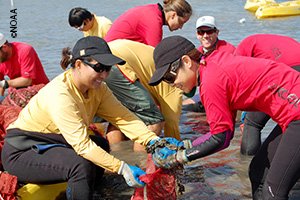 The removal of invasive algae from 27 acres of nearshore waters Honolulu, Hawaii’s Maunalua Bay to restore coral reef and seagrass habitat, for example, generated 75 direct jobs. For those 75 people, that translated to $12,000 more in household income in 2010.

Another socioeconomic benefit of coastal habitat restoration, say the researchers, is the transfer and development of green jobs skills. “Many of the projects involved a range of technical folks—biologists, ecologists, coastal oceanographers, wetland scientists,” said Edwards, “but at the same time, these people worked with, say, backhoe operators who were now working in a new area. A nursery operator who does flowers for gardens, for example, can become a nursery for local, endemic plants for use in coastal restoration projects. Without any empirical evidence, I would say there is a new generation of restoration specialists.”

“Blue infrastructure jobs are, in fact, green,” said Edwards. “When you hear ‘green jobs’ in the media, the term is usually referring to renewable energy. But the Bureau of Labor Statistics’ definition includes people involved in coastal habitat restoration.”

How lasting are these blue green jobs? Though the transfer of skills and the forging of powerful partnerships that has occurred as a result of NOAA’s ARRA projects could provide leverage and hope for scaling up coastal restoration efforts, the answer to this question and others related to the long-term socioeconomic impact of these efforts remains to be seen.

“Our initial study was a snapshot,” said Edwards. “It should be noted that many of the restoration jobs from the ARRA projects were short-term as per the stimulus funds, but we hope others will follow up and provide more information on the expected long-term benefits of these projects, such as tourism, storm protection, etc.”

What is certain, however, is that scientists like Edwards and Sutton-Grier are not likely to stop examining the economic and social benefits of ecological restoration. 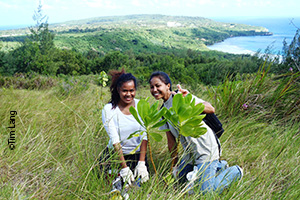 Student volunteers help with revegetation at a NOAA restoration site

“Ecological data alone is never going to give you answers to the questions, ‘So what? Who cares? Why does this matter to me and my community?’” said Sutton-Grier. “Social science provides key information to answer those questions, and that’s what usually gets you the money to do projects or the legislation to protect ecosystems.”

“Let’s face it,” said Edwards, “policy makers are aware of their constituents’ question: ‘What’s in it for me?’ The goal for us is to try to find different ways to try to answer the question.”

We look forward to following their attempts, and those of other social scientists around the world, to do that.

Nature is Teaching. Are We Listening?