From the indigenous communities along the coast of the Salish Sea comes a potential model for food security, cultural reconnection, and sustainable coastal land management.

In 1995, while flying over the Broughton Archipelago as part of a habitat mapping project for the government of British Columbia, marine geomorphologist John Harper noticed something peculiar. Along the coasts of territory inhabited by the indigenous Kwakwaka’wakw people, he saw hundreds of stone walls. For more than a decade, non-native scientists and historians were stumped as to the origin and significance of the stone walls. It wasn’t until they turned to the traditional ecological knowledge of Kwakwaka’wakw elders that the mystery of the walls–and a model for sustainable coastal land management–was revealed. 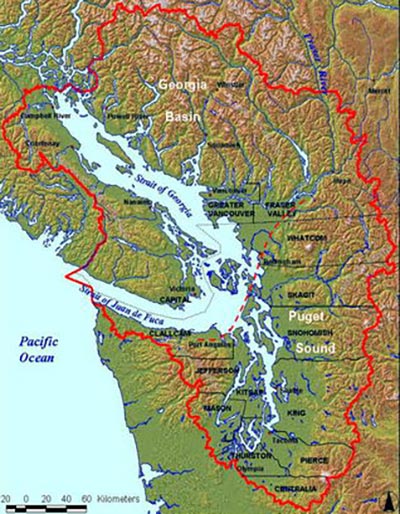 The Salish Sea ecosystem, an intricate network of waterways that includes the Strait of Georgia, the Puget Sound, and the Strait of Juan de Fuca, is home to numerous indigenous communities. For thousands of years, the Kwakwaka’wakw Nation and many other linguistically linked indigenous communities of the region (known collectively as Coastal Salish peoples) built and maintained “clam gardens,” rock walls along the low tide line of the intertidal zone, to trap sediment and expand the area for the productive growth of clams.

For Coast Salish peoples, this ancient form of mariculture, which has since been observed as far south as Orcas Island in Washington and as far north as southeast Alaska, ensured an abundant supply of a major food source and a critical connection to culture and place.

Clams were consumed raw, boiled, smoked, baked, steamed, and roasted, but their significance extended well beyond their nutritional and caloric value. They were a raw material for spoons, ladles, and other tools. They were used for jewelry and to ornament headdresses and clothing. Dried by some cultures, and skewered and smoked on cedar branches by others, clams were commonly used as currency and traded for goods such as canoes, bowls, baskets, and blankets. Clam harvests and feasts were often social, and in many Coast Salish cultures, were accompanied by ceremonies, rituals, and dance. So central was the clam to indigenous communities in this region, it even appeared in some of their oral traditions. In the creation story of the Haida people of Haida Gwaii, for example, the first humans emerged from a clam shell. 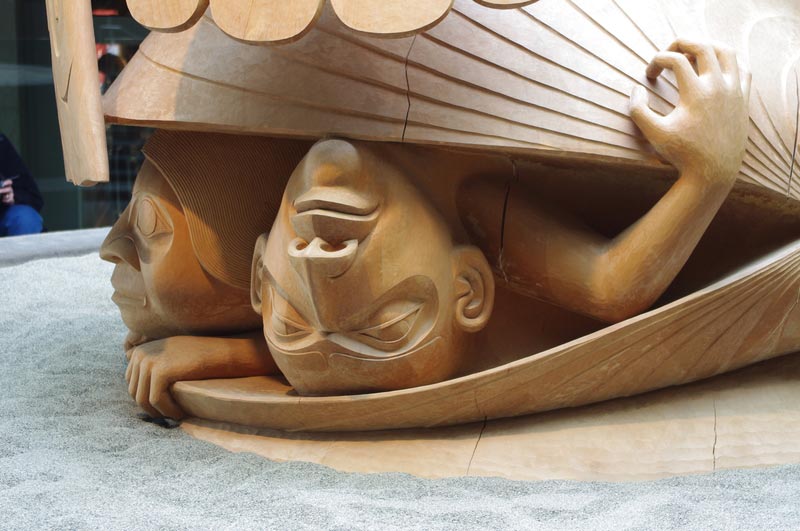 The Raven and the First Men sculpture by Bill Reid. According to Haida legend, the Raven was alone one day on Haida Gwaii. Suddenly, he saw an extraordinary clamshell, and protruding from it were a number of small creatures. The Raven coaxed them to leave the shell to join him. They did, and became the first Haida.

Maintaining the clam gardens required constant care. Clam garden beaches were cleared of large cobble, and as they were dug and turned over, oxygenated sea water was introduced into the ground. In teaching members of the community how to build and maintain the clam gardens, when and how to harvest clams, and how to store, prepare, and consume them, elders passed along traditions, languages, stories, and intergenerational connections to the land and sea. 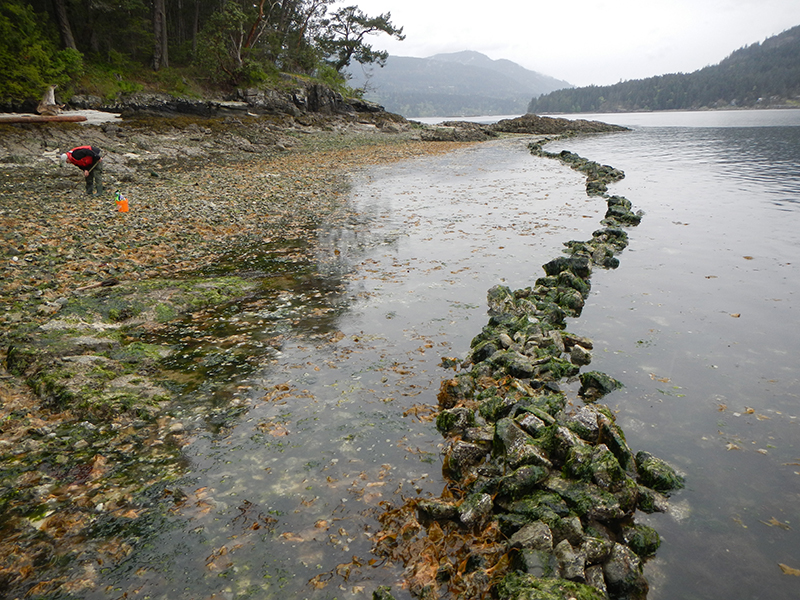 With the arrival of European settlers, however, clam gardens and the practice of maintaining them—like so many aspects of indigenous culture in North America—suffered. As colonialization took hold and indigenous people were forced onto reservations and into boarding schools, and as settlers began altering ecosystems for agriculture, it became increasingly difficult for Coast Salish people to access, let alone learn about and maintain traditional clam gardens.

Though many of the physical structures still exist today, the active participation of indigenous people in managing them has largely been lost. A maelstrom of more recent factors, including peoples’ lack of boats to access the gardens, privatization of the foreshore, restrictive shellfish management regulations, pollution, and ocean acidification, have become barriers to reviving the practice of building and maintaining clam gardens. According to the Clam Garden Network, a group of First Nations, researchers, and resource managers who are interested in the cultural and ecological importance of clam gardens and traditional clam management, these barriers have resulted in many untended clam beaches. On these beaches clams are crowded, sediments are compact, and sea lettuce (Ulva sp.), driftwood, and dead clams cover the beach surfaces.

But that is not stopping an inspiring initiative led by ten First Nations communities in partnership with Parks Canada, Canada Royal Roads University, Simon Fraser University, the University of Saskatchewan, and the Clam Garden Network to restore and revive traditional clam gardens on two Canadian islands. On Russel Island, part of the Gulf Islands National Park Reserve, and nearby Salt Spring Island, project partners are rebuilding rock walls that are over a thousand years old and reigniting Native peoples’ interest and participation in traditional clam gardening. These are the first clam gardens to be restored on the coast of British Columbia, and they show incredible promise. 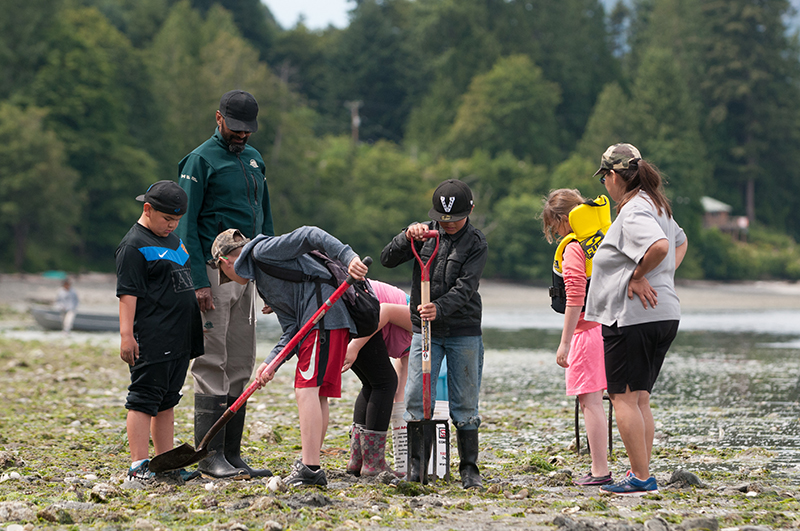 The six-year project began with the formation of traditional knowledge workgroups that included Native experts in Coast Salish languages, cultures, and harvesting practices. The project team held elder and youth science camps, where participants listened to elders share traditional stories, experienced aspects of Hul’q’umi’num and WSÁNEĆ cultures, and helped gather scientific baseline data by identifying and measuring clam species and determining the composition and abundance of the bivalves on the beaches. Guided by Coast Salish knowledge holders, and complemented by modern science, the restoration project also involved activities ranging from moving large boulders to assessing the health of the intertidal ecosystem using scales and gauges.

Meanwhile, researchers involved with the project are studying the clam garden beaches and learning about their potential benefits—to clams, community, culture, and perhaps climate change adaptation.

“Clam gardens are innovations by people made thousands of years ago that can double clam productivity,” said Anne Salomon, marine ecologist and associate professor at Simon Fraser University’s School of Resource and Environmental Management. She ought to know. Salomon has been deeply involved in research related to clam gardens and other forms of shellfish mariculture. One such study for which she was a collaborator (Groesbeck et al, 2014) showed that on average, clams grow twice as large in the clam gardens as they do in beaches with no rock walls. The same study showed that clam gardens doubled the production of littleneck clams (Leukoma staminea) and quadrupled the production of butter clams (Saxidomus giganteus).

Unlike most modern methods of aquaculture, clam gardens do not rely on the use of plastics.  But that is not their only ecological appeal. 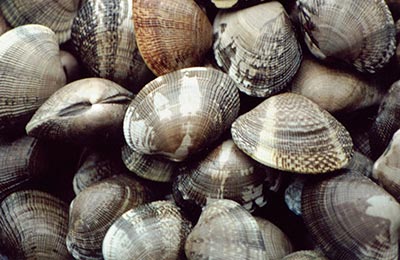 “We often think of shoreline armoring as bad, but clam gardens are ecologically productive and dynamic,” said marine ecologist Marco Hatch, who is a member of the Samish Indian Nation, and an assistant professor of Environmental Science at Western Washington University. “The rock wall supporting the clam garden provides really unique habitat, with lots of holes and crevices for critters to hide in.” Many of these critters, such as red sea cucumbers (Parastichopus californicu), red rock crab (Cancer productus), large snails, and many types of seaweeds, not only add biodiversity but provide food for other animals.

“One hypothesis is that the clam garden rock wall is helping to reduce wave energy,” said Hatch. “Many communities are looking at clam gardens as a potential way to create a protected clam habitat in the face of rising seas.” 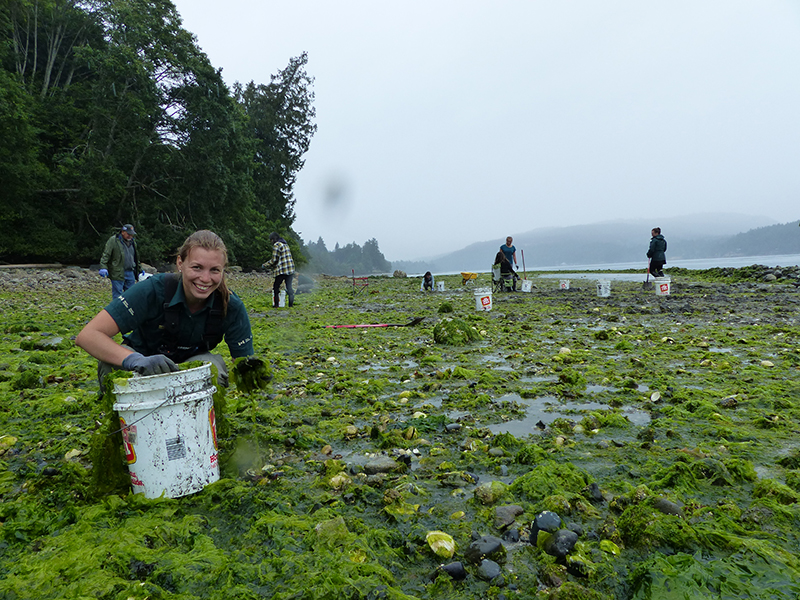 Humans aren’t the only ones who might benefit from clam gardens as climate changes. According to Salomon, clam gardens regulate and stabilize the temperature of clam beaches such that they are kept warmer in the winter and cooler in the summer relative to beaches without clam gardens. According to Salomon, this is because the terraced nature and reduced slope of clam garden beaches allow them to experience higher and more consistent sea water flow compared to beaches with no clam gardens. Being less exposed to temperature extremes “makes for happy clams,” said Salomon, “because they avoid getting baked in the summer and frozen in the winter – both of which can cause high clam mortality.” Salomon believes that clam gardens could help stabilize projected extremes in temperature associated with climate change. Salomon’s research also shows that clam gardens have higher carbonate levels in their sediment than beaches without clam gardens. According to Salomon, this could be due to both the intentional addition of crushed shell by people in ancient times (as several indigenous knowledge holders have told the project team), and the natural accumulation of more clam and barnacle shell hash in clam gardens. Clams need carbonate to build their shells, so under increased ocean acidification conditions, she explained, “clam gardens could increase aragonite saturation levels locally thereby helping clams produce shells – but we have yet to find strong evidence for this possible benefit.”

Unfortunately, clam garden restoration is not a cultural and ecological coastal panacea.

“As we try to rebuild and maintain these systems and restore traditional food species and technologies, we also have to ask the question of whether or not those species are fit to eat,” cautioned Hatch. This is indeed a question worth asking, as pollution—along with ecosystem degradation, ocean acidification and warming, and privatization of the foreshore—is a major factor threatening traditional clam harvesting (Pinkerton and Silver 2011). Last summer, Yes! Magazine reported that the Lummi Nation, whose territory includes 21,000 acres of tidelands and uplands on the coast of northern Washington, was forced to close 800 acres of their most productive shell fishing due to bacterial contamination from upstream dairy farms.

Perhaps the clam gardens themselves can help address that problem. Although the impact of clam gardens on water quality has not yet been studied, the idea is intriguing.

“As a whole ecosystem, the clam garden has quite a lot of capacity for filtration and for absorption of nutrients,” said Hatch. “You have massive filtering capacity of all the clams on the beach, and the rock wall has many other filter feeders, such as the porcelain crab (Porcellanidae) barnacles, and you have all these seaweeds that are absorbing nutrients and phosynthesizing.”

While a great deal remains to be studied and learned about clam gardens–through traditional ecological knowledge and modern scientific methods–this ancient form of mariculture may hold promise in terms of eco-cultural restoration. Salomon points out that clam gardens are just one example (along with estuarine root gardens, territorial use rights for fishing, protocols of reciprocity, and others) of a management and stewardship practice that conferred resilience to coastal communities thousands of years ago.

“Clam gardens provide strong evidence that people in the past had a depth of knowledge that can catalyze solutions to some of today’s foremost environmental challenges,” she said. “That deep time knowledge from the past is incredibly valuable and we should respect it and learn from it.” 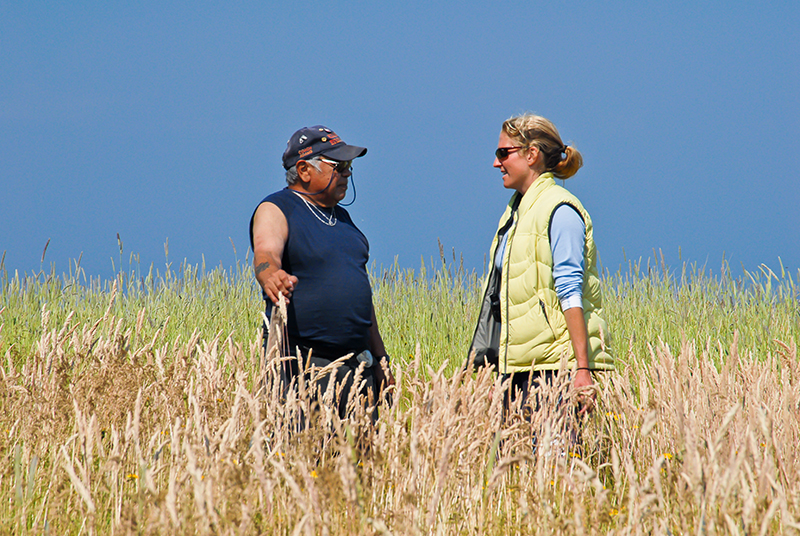 For Hatch, the work is also deeply personal. “When I was going to school, I was told that Native people couldn’t impact the ocean, that it was too big,” he said. “But here is an example of modification that may represent hundreds of thousands of acres of modified beaches that were altered with intent to work with the landscape and increase productivity in a natural way. The research that we’re doing involves Tribal and First Nation partners and highlights the skills, technologies, and intent of my Coast Salish ancestors to enhance both the productivity and resilience of their ecosystem.”

Today, when environmental degradation continues at an alarming rate, the past and present of clam gardens in the Salish Sea region teach us an invaluable lesson: by working with nature, rather than against it, and by honoring the practices of cultures with close ties to the land and sea, we can gain knowledge, innovation, and meaningful life experiences.