When you were little, what did you want to be when you grew up?

When I was very little I decided that I wanted to be an engineer or a puppeteer.  Most of the men in family were engineers and I loved Jim Henson. From the engineering side, I grew up surrounded by photos of the dams my grandfather [Roland Gail Baker] designed and built. I thought it was amazing that he left these huge monoliths behind him, like ancient pyramids! I wanted to follow in his footsteps. I did, in fact, become a water resource engineer just like him, and I focused on structural engineering during my undergrad. But the big surprise was that I ended up becoming an expert on the removal of dams, not their construction.  I take the most pride in restoration projects, that if you visited the sites today, you would never know I was there. 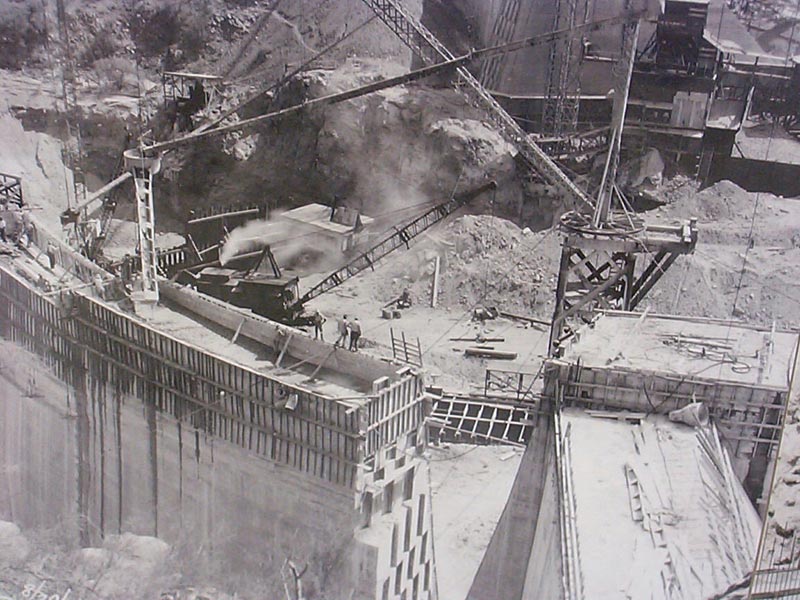 You wouldn’t think puppetry aligns closely with this same vision, but actually as I was looking into engineering programs I did find some that overlapped with large scale puppetry, such as the engineering that goes into stage productions like “Walking with Dinosaurs”. Now that is some cool engineering! As a kid I often had a puppet in my hand and my sisters and I were often performing puppet shows from the way way back of our station wagon to the cars driving by us on the highway (we didn’t have seatbelt laws back then).  It was during these puppet shows that I determined that men with beards had the best personalities because they always laughed the hardest and waved back.  I am pretty sure if you researched this, you would find that I was statistically correct in my childhood assessment of men with beards. 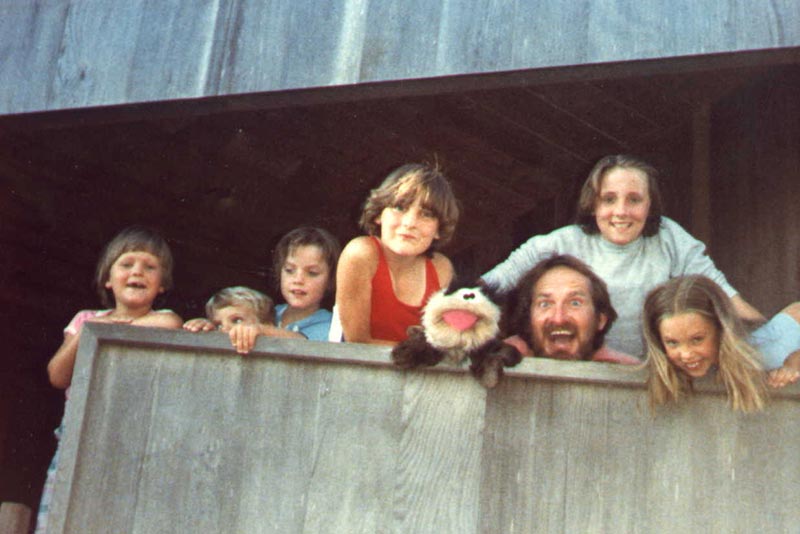 A young Laura (center, with puppet)

What is your favorite book?

As a kid, one of my favorite books was My Side of the Mountain, because who wouldn’t want to live in a hollowed out tree and have their own hunting falcon? As an adult, my taste ranges from sci-fi books like those written by Dean Koontz to anything by Jane Austin.

Well ,thank goodness there are no rules about enjoying the great outdoors during the pandemic. I think most of us nature lovers would agree that a day spent in the woods or fishing is a day well spent. One of my favorite getaways is our cabin in New Hampshire. It feels like our own little piece of heaven and nothing beats taking an outdoor shower, looking out over the lake, on a beautiful morning! 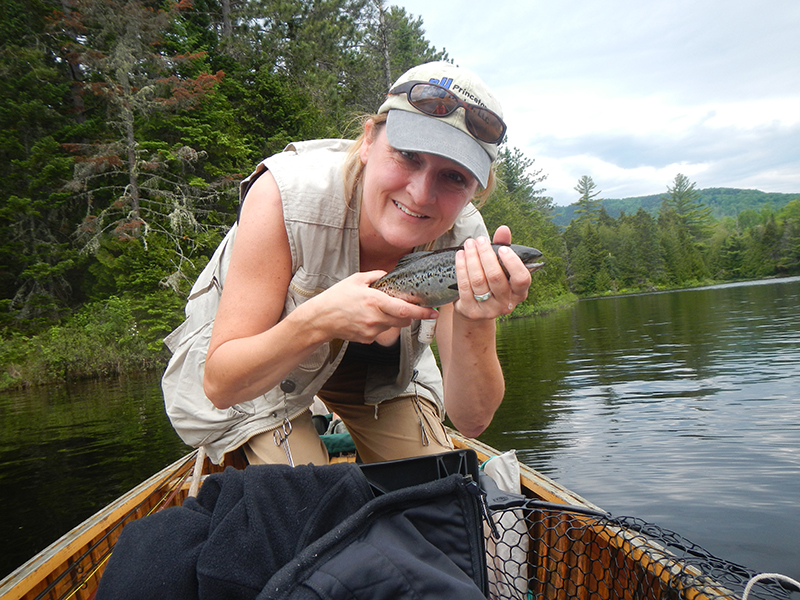 Has any one of your dam removal projects impacted you more than the others?

The day you watch the big, yellow equipment start removing the dam and freeing the river of its shackles is truly amazing on each and every one of them. However, if I were to pick a favorite it would likely be the five dams that I helped remove from the Naugatuck River in Connecticut back in the mid to late 1990s.  I always say that the Naugatuck River is my favorite river because it needed me the most. The Naugatuck River, once thriving with migratory fish runs and indigenous American villages along its shores, was horrifically impacted by the Industrial Revolution, to the point where its waters flowed different colors each day. When my father-in-law use to drive by as a boy, his parents would roll up their car windows because the river smelled so bad. I was lucky enough to be hired by a great team of state and environmental organizations who were working to restore the river holistically through dam removal, fish passage, water quality improvements, vegetative buffer planting, trails and more. 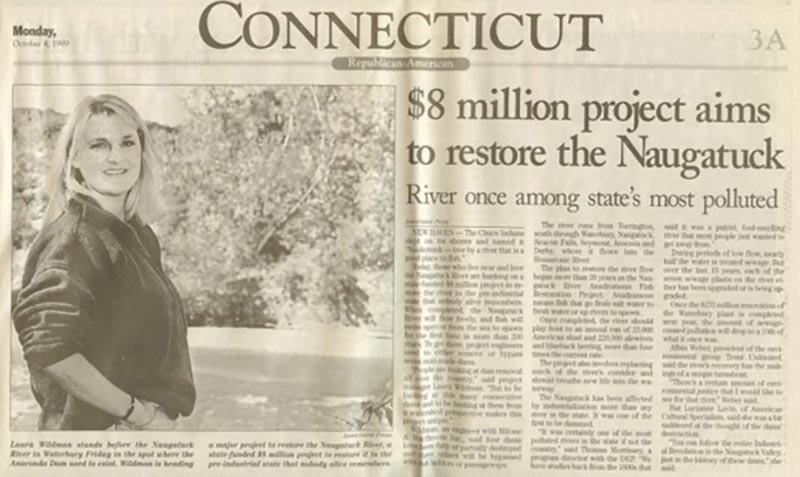 It was my first dam removal project and we were able to remove five dams from the system!  That was quite the an accomplishment in the mid 1990s, and is actually quite impressive from today’s restoration standards as well. It has been inspiring to see the revitalization of this river over time. It still has a long way to go, but the Naugatuck River restoration efforts will always have a special place in my heart.

Favorite course as an undergrad:

Oddly for undergrad, it was a wastewater course that focused on land treatment waste. In other words the course taught us how to treat waste water by filtrating it through vegetation and soil.  The professor, James Morris, was wonderful! I am still in contact with him all these years later. For my graduate degree, my favorite course, hands down, was entitled “Archetypes in the Environment,” taught by an expert in Tibetan studies if I recall correctly.  The course was fascinating and taught us about the many repeating natural themes in art, literature, mythology, and religion. We learned that humans as a species react to the environment is some predictable ways that can then be seen in the many ways we express ourselves. We studied some of the amazing similarities in different cultures that developed on completely separate, and yet parallel tracks.  The class opened up a whole new way of understanding and experiencing the natural world for me, and linked that knowledge to a better understanding of how diverse cultures share similar roots. 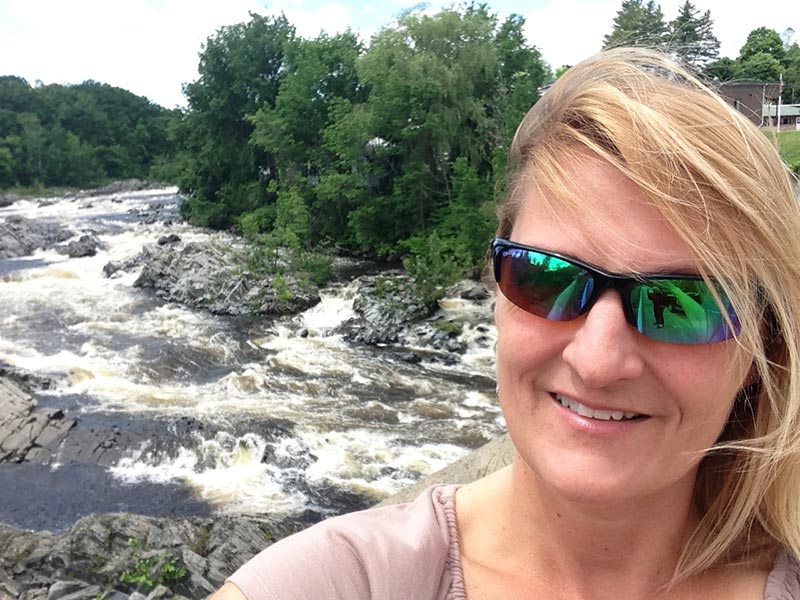 What drew you to Biohabitats?

Biohabitats’ mission statement!  Restore the Earth and Inspire Ecological Stewardship!  It doesn’t get any clearer than that for me!  That is exactly what I have been trying to do with my life’s work and I am so excited to join a team with the same mission!  I believe strongly in the ancient Iroquois philosophy that “In our deliberation, we must consider the impact of our decisions on the next seven generations” and I believe that at Biohabitats I will be encouraged to apply this principal to all of my efforts.

Rivers of course!  I feel that they speak to me and that my job is to speak for them! 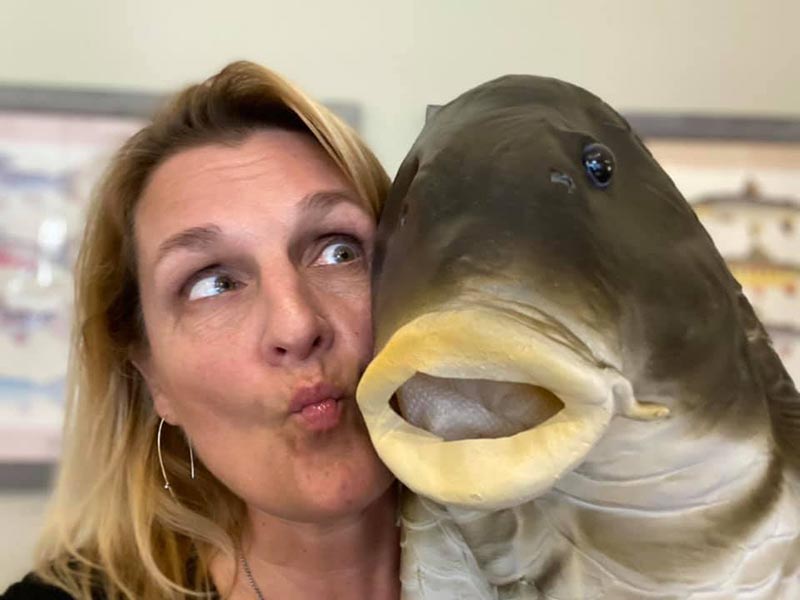 Do you have a special talent that people may be surprised to learn about?

I like to write children’s books about rivers in my spare time.  I have completed one called Why Are the River Rocks Round?, which is basically a fluvial geomorphology book for kids, and I have been working on two others. 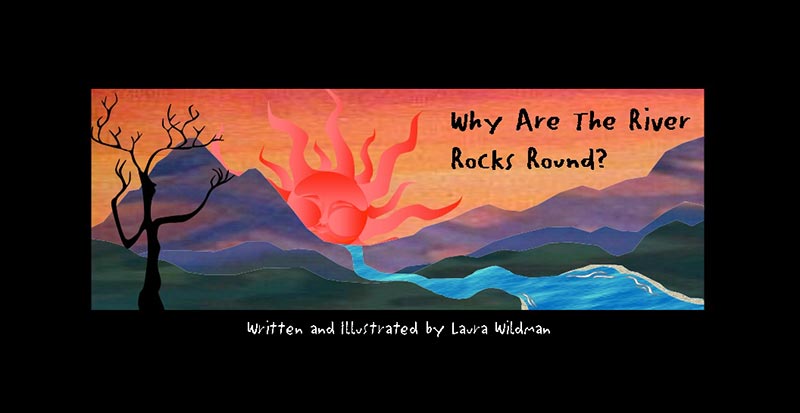 Who is your role model?

My father was my role model and a role model for many others. He taught me my love for the outdoors by bringing me fishing, camping, hunting, canoeing, and hiking along rivers in his basket pack before I could even walk. He taught me how I was part of a larger cycle of life and how fascinating that cycle is.

At bedtime he read us stories from the Foxfire Book series about living simply and off the land. During the weekends, he would teach us how to make maple syrup by tapping trees, how to grow vegetables in our garden, or how to tie our own flies for fishing. Both of my parents are my role models since they both taught me what it meant to be in a lifelong, loving and caring relationship. 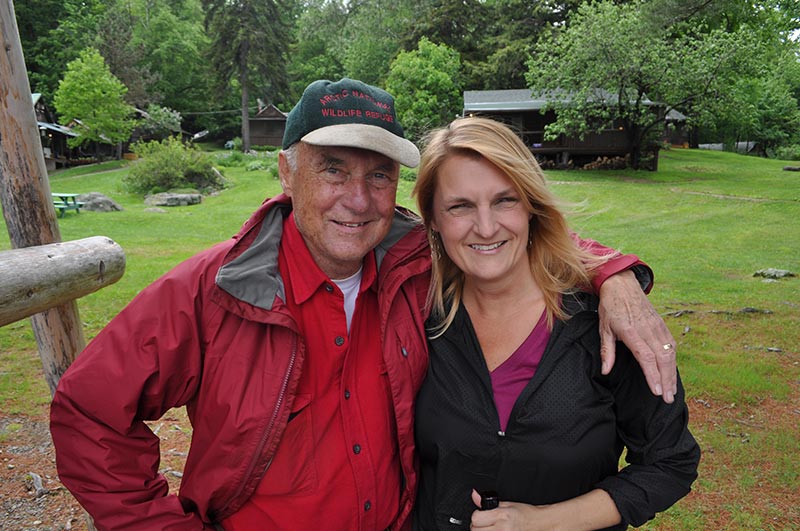 Laura and her dad, Cris Hayden Schaefer, on a fishing trip in Maine

Most profound experience you’ve had in nature:

Well truly nothing beats eating a bologna sandwich on the top a mountain you have just climbed, but I do recall an experience that was perhaps a bit more profound. 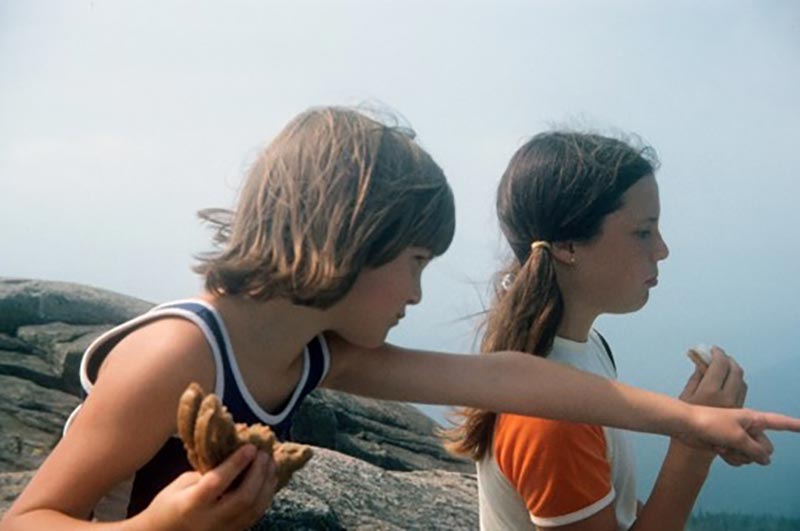 I was a young engineer in the Seattle, Washington area working at my first engineering job. I was scouting out a beautiful piece of undisturbed land on which my client, a developer, wanted to build condominiums.  As I walked along the forest with a bed of pine needles under my feet and tall pines swaying above my head, a large owl swooped down to within just a foot or two of my head and then on into the forest. It was magical!  I knew at that moment that I could not be involved in engineering that would clear this land and replace the pine trees with pavement and maximum density development. I decided then and there that I would leave engineering.  I almost did. I moved back to New England and took what I thought would be a temporary engineering position until I determined my new career path.  However, while at that job, I was given a project working to determine the adequate flows needed in a river to maintain fish habitat, and I met my mentor, James MacBroom, who taught me about river processes and restoration.  As it turns out you can be an engineer who works solely on ecological restoration projects.  I had found my passion, and I think that owl knew exactly what he was doing. 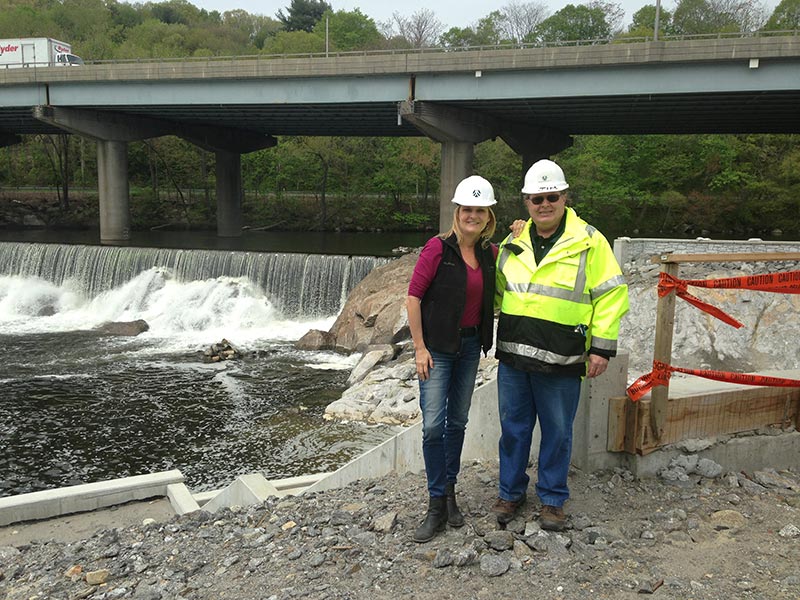 Laura and her mentor, James MacBroom, at a dam removal site on the Naugatuck River