Despite its title, the 2018 documentary WILDER THAN WILD: Fire, Forests, and the Future begins very quietly. No narration, no dialogue, no swelling score over opening credits. We hear only a soft crackling as we see glowing embers lift into a night sky. A quote from environmental historian, Stephen Pyne appears:

“The meaning of the flames depends on the story that grows out of the ashes.”

From a variety of vantage points – the air, the ground, a car window- we then experience the sights and sounds of a massive wildfire: the snapping and popping of low-lying fuel being consumed; the “whoosh” of flames fanned upward by wind gusts; the sizzling of billions of leaves in the canopy. As pyrocumulus clouds menacingly mushroom over mountains, the names of megafires scroll upwards, beginning with the Milford Flat Fire of 2007 and ending with the Mendocino Complex Fire of 2018. Knowing how long that scroll has extended since the release of the film in March of 2018 makes the graphic all the more ominous.

We soon learn that the story of this film grows out of the ashes of the 2013 Rim Fire, a blaze that began in a remote area of California’s Stanislaus National Forest and went on to burn more than 257,000 acres. The fire came dangerously close to the family cabin of filmmaker Kevin White, and the devastation he witnessed propelled him on a journey to understand how such fires happen. 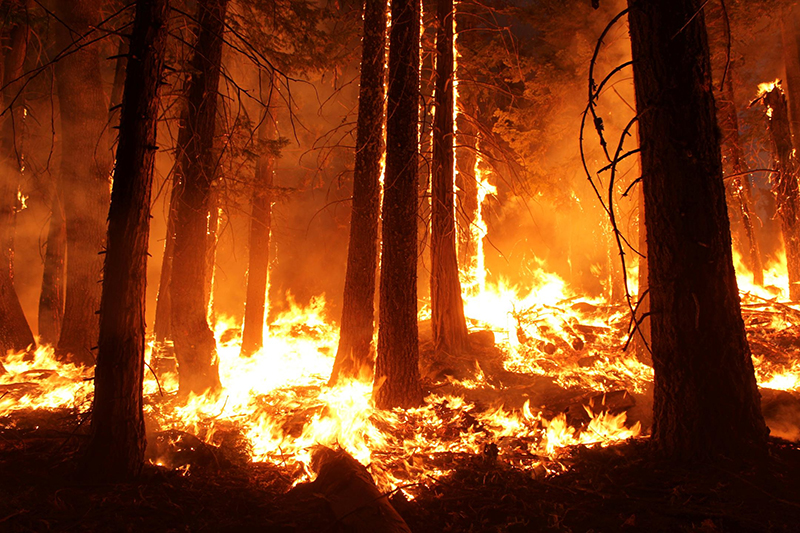 Captured by White and writer/producer Stephen Most, this journey begins with the aftermath of the Rim Fire. We see the charred remnants of a summer camp White attended as a child. We travel with a forest ecologist to Corrall Creek, an area once surrounded by old growth forest, and see nothing but dead trees.

The 58-minute films continues through other devastating California wildfires that occurred in the following years into 2018. Along the way, he learns more about the impacts of megafires on the people, ecology, and watersheds of the Pacific Northwest region. This includes iconic sites within Yosemite National Park, native species like the black bear, Indigenous communities such as the Yurok of the Klamath River basin, and major sources of drinking water like the Hetch Hetchy Reservoir.

In 2015, White’s family cabin is again threatened, this time by the Butte Fire. While evacuating, he films some of the fire, which is leaping into the canopy. “Watching a wall of flames consume an entire forest right in front of you is humbling,” he says in the voiceover. It is also likely terrifying. In his footage, we see embers sent aloft and we can only imagine them igniting whatever they descend upon. Small silhouettes of firefighters and equipment are backlit by the massive, orange glow of flames. Veteran firefighter Ken Pimlot, then Chief of CalFire, is heard saying, “We are experiencing now the fires of the future.” 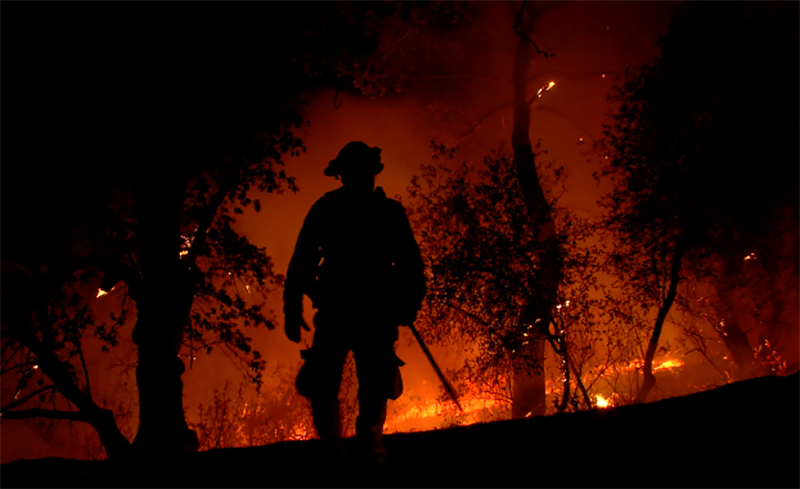 Although White’s cabin survives the fire, the same cannot be said of the property of many of his neighbors. Burned-out cars dot the darkened landscape, as do ash-covered foundations upon which once stood homes and businesses.

The camera then shifts to Boise, Idaho, where it follows Kelly Martin, Chief of Fire & Aviation for Yosemite National Park, as she walks along a path in the Wildland Firefighter Monument at the National Interagency Fire Center. A sanctuary dedicated to hundreds of firefighters who died in the act of wildfire management, the monument is a somber of the human loss associated with wildfire.

White’s desire to learn how wildfire spreads takes him to the Forest Service’s Missoula Fire Sciences Laboratory, where he learns that weather, topography, and a warming climate all influence fire behavior. But, as the Center’s Research Scientist, Mark Finney explains, a century of fire suppression is one of the primary factors that has set the stage for today’s massive wildfires. With the help of environmental historian, Stephen Pyne—the Stephen Pyne behind the film’s opening quote—White then examines the history behind a U.S. policy of suppression that began with the creation of the U.S. Forest Service, which initially viewed fire as a threat to its staff and its timber. By the 1930s, White states that “the agency had declared war on wildfire.”

Continuing the war theme, Pyne explains that much of the U.S. war surplus material following World War II and the Korean War (including aircraft) went towards battling fires. “Yet we know we cannot win,” he says. “Fire is going to happen. There is no pushing this issue aside.”

Forest Service ecologist Malcolm North then explains that like many other forests, the forests  of the Sierras evolved with frequent, low-intensity fire, and a century of suppressing those fires has resulted in a massive buildup of fuel.

As Finney, back at the Fire Sciences Lab puts it, “We have now set ourselves up to have landscapes very continuous in fuels,” he says. “When fires start 20 minutes away, they literally can move all across that landscape in one burning period- one day.” 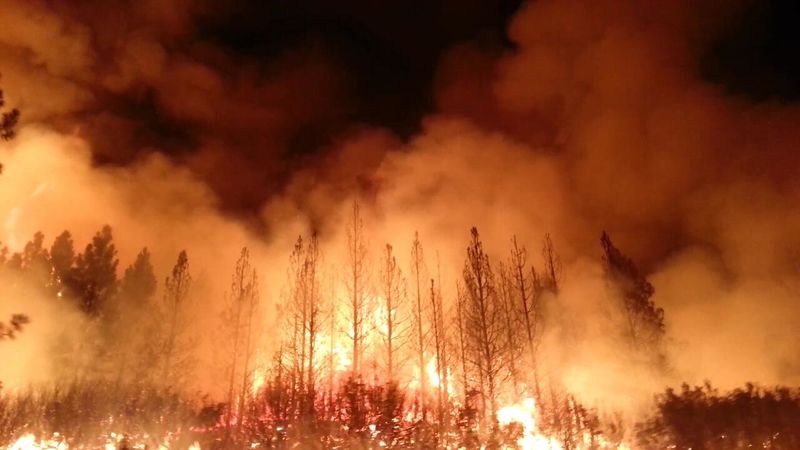 White also examines the role of megafires air quality degradation and in releasing of carbon into the atmosphere. The Rim Fire alone, he reveals, released 1.2 billion gallons. A representative from the California Air Resources Board shares the daunting statistic that globally, forest fires are as big a source of greenhouse gas emissions as transportation, and that forests are on track to lose more carbon than they store.

White learns the uncomfortable truth that fire suppression also meant extinguishing connections between Indigenous people and their culture by preventing cultural burns that were critically connected to their lifeways for millennia. White visits Thomas Wilson, Sr., a member of the Yurok Tribe of the Klamath River Basin, who explains how the suppression of fire, including cultural fires traditionally set by Yurok, resulted in grasslands being overtaken by conifers, and the crowding out of huckleberry, a primary food source for bears. Wilson describes his own childhood experience with culture fire, sharing a memory of his grandmother giving him a matchbook and instructing him to burn a hillside. Traditional fire, according to Wilson, “kept our world in balance.”

The film then shifts to a more hopeful tone, as White learns about efforts to encourage constructive fire more in line with the way the forests of the Sierras evolved. This is done, as White learns, through managed fires, forest thinning, prescribed burns, and community engagement.

White discovers that many solutions are coming from local, collaborative efforts, and he highlights the Yosemite Stanislaus Solutions (YSS), a unique and diverse assemblage of stakeholders that formed after the Rim Fire. Operating under the guidance of the Forest Service, YSS members share the goals of restoring and maintaining healthy forests and watersheds, fire-safe communities, and sustainable local economies. The fruits of their thinning, planting, and prescribed burning efforts are clear, as we see an area of tall trees cleaned of undergrowth.

We also witness a prescribed burn being collaboratively implemented in Yosemite National Park by the National Park Service, the Yurok Tribe, CalFire, and other agencies. “There is an art and a science to the use of fire in the landscape,” says Martin. We see the truth of her statement in the well-coordinated dance of the prescribed burn. Various members of the burn team carefully aim drip torches and ignite small fires that burn in planned directions. Unlike the fire footage at the film’s opening, scenes of prescribed fire are peaceful. The fire burns slow and gently, consuming only fuel on the ground, and not leaping up into the canopy.

“My heart has been singing for the last three days,” says a beaming Elizabeth Azzuz a Cultural Fire Manager with the Yurok Tribe. Earth, she says, is suffocating under the overabundance of fuels, and the return of traditional fire is helping the planet to breathe.

It is also, according to Margo Robbins, another Yurok Cultural Fire Manager, “starting to open the eyes of people nationwide about the potential use of fire to bring back balanced ecosystem and a preventative tool for wildfire.”

Lest the viewer become lulled into a false sense of comfort by these uplifting scenes, the film shifts—as unexpectedly as a wind gust that whips a small campfire out of its ringed confines—to the sights and horrific sounds of yet more wildfires. Here, in the final moments of the film, we witness what happens when uncontrollable forces such as wind and drops in humidity collide with human-driven issues of drought, population growth, and fuel buildup. All it takes is ignition for things to quickly turn terrible: the 2017 Wine Country Wildfires, which destroyed nearly 9000 buildings and killed 44 people, and the 2018 Camp Fire, California’s deadliest and most destructive wildfire to date. 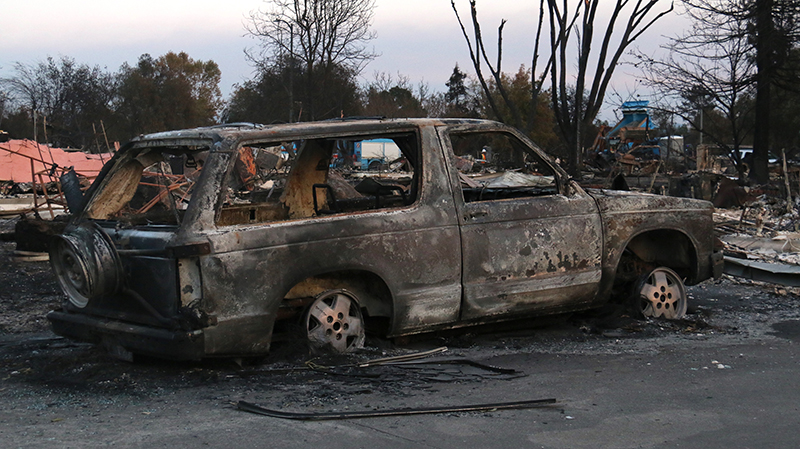 A burned car in the Coffey Park neighborhood of Santa Rosa, CA after the Wine Country Fires. ©Kevin White

Aerial views of still-smoking, burned-out subdivisions remind us of the urgency of the fire situation and the need to work together to resolve it before it is too late.

The film continues to be a labor of love because we believe the more the public understands the issues underlying catastrophic wildfires, the more likely communities can develop resiliency in living with wildfire. For many of those communities in wildfire prone areas it’s no longer a question of “if,” but “when and how often”? Since 2018, when we released the film, increased public information has led to a significant shift in our understanding of what we can—and cannot—do to address wildfires. Terms like “prescribed burns,” “defensible space,” and “Cultural Fire” are no longer as foreign, particularly in the West. It has been gratifying to see this shift, and it helps create a small measure of hope and possibility, knowing how difficult the future will be.

To date, we have had more than 850 broadcasts of the film on PBS and 450 community screenings. We are particularly pleased with the community screenings because we have found that when communities come together, either virtually or in person, there is opportunity for engagement that can lead to important discussion—and even change in some cases. This “bottom up” approach with screenings and discussion in many different communities has been particularly gratifying!